Two years ago when I started learning how to write SQL code and learning how to work with SQL, it felt complex and disjointed to me. But now, working with SQL is one of my favorite thing to do and I totally enjoy analyzing datasets with SQL as it gives a detailed information of the dataset.

In this project, I carried out an exploratory analysis on petrol/gas prices around the world. The dataset contains records of petrol/gas prices of ALL the countries in the world, daily petrol/gas consumption of each country ,varying prices per liter and barrel as of June, 2022.

Using SQL, I was able to run some queries through the dataset and get answers to some questions and also to get insights. 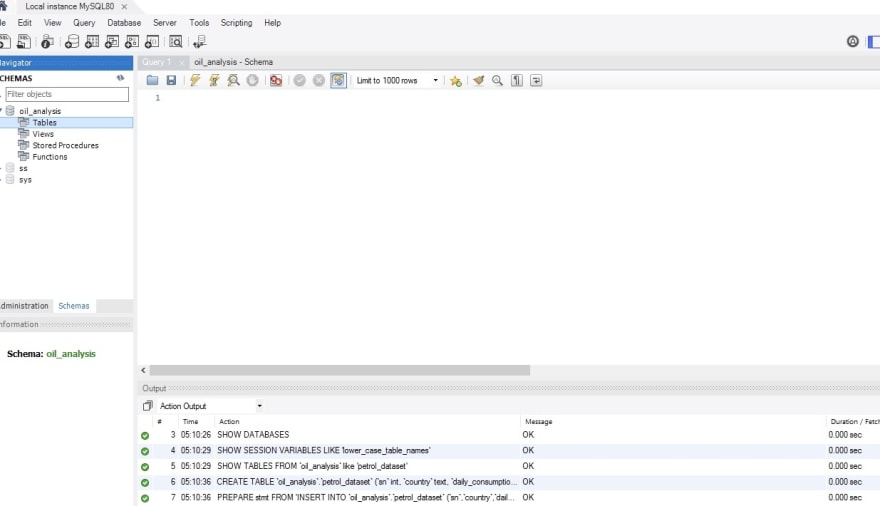 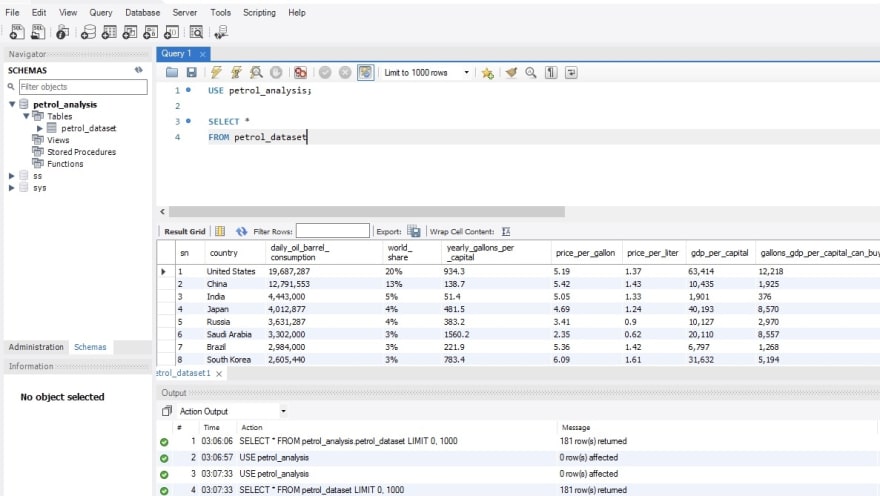 Analysis was done to get answers to some very important questions and to get an understanding of the dataset.

PETROL/ GAS CONSUMPTION AROUND THE WORLD.

1)To start with, I wanted to know the total sum of barrel of petrol/gas consumed by the entire world on a daily basis. 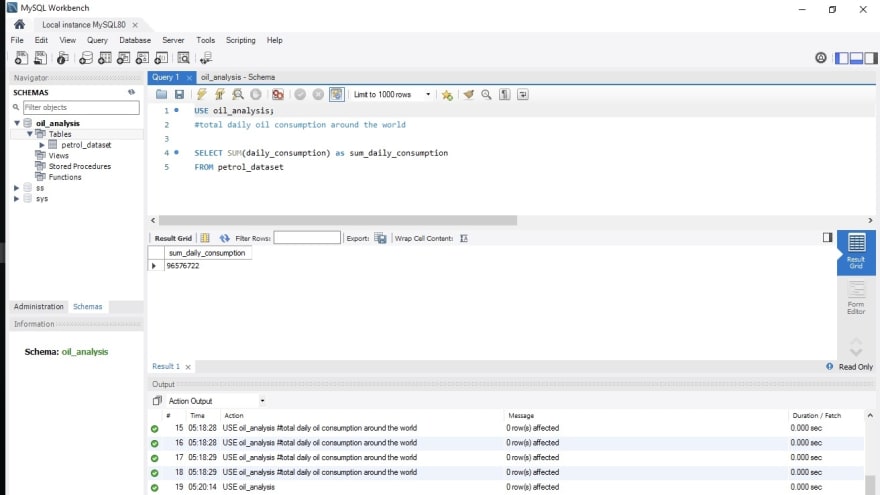 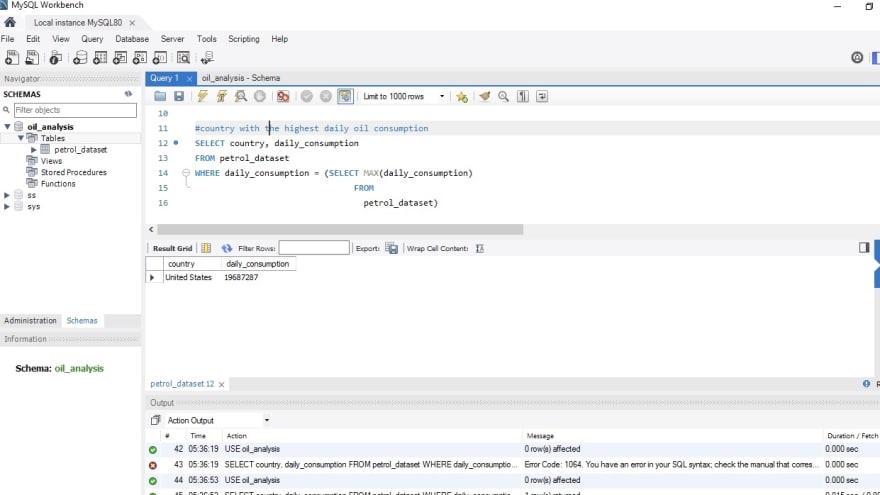 The United States of America consumes the most petrol/gas daily.
19,687,287 barrels per day. 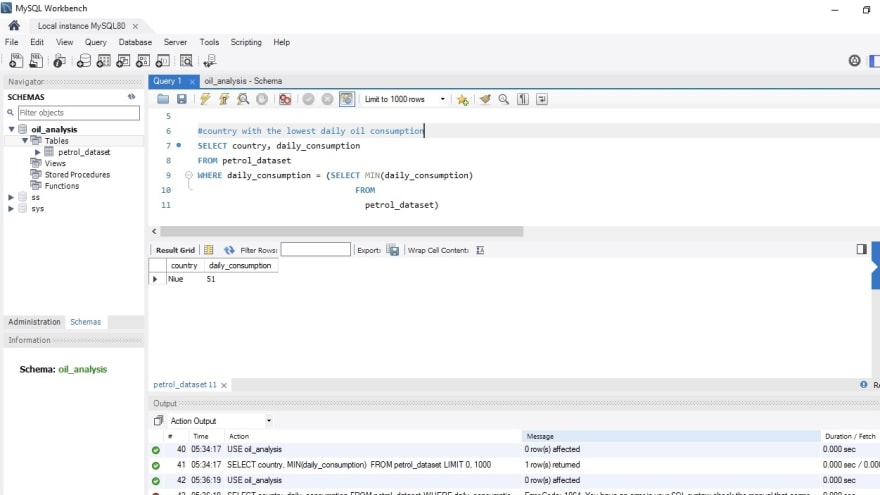 Niue consumes the least petrol/ gas in the world. 51 barrels per day.
Until while carrying out this analysis, I didn’t know of the country called Niue, had to google it up and realized it’s a country with an average of 1,620 people, located in the Oceania continent. 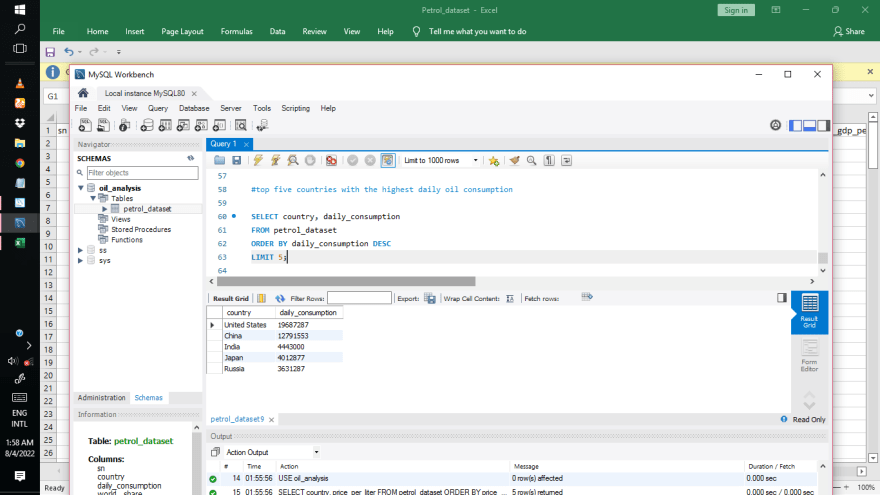 5.Bottom five countries with the lowest oil consumption around the world: 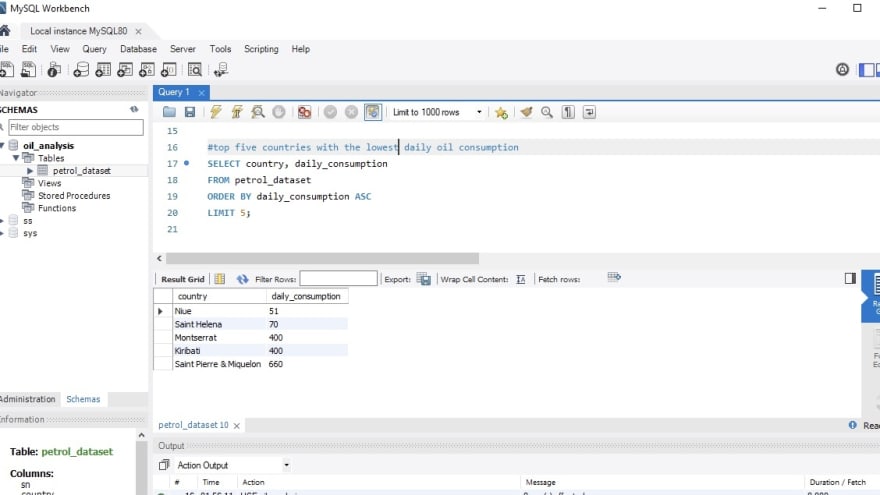 1.Country with the highest price for a liter of petrol/gas. 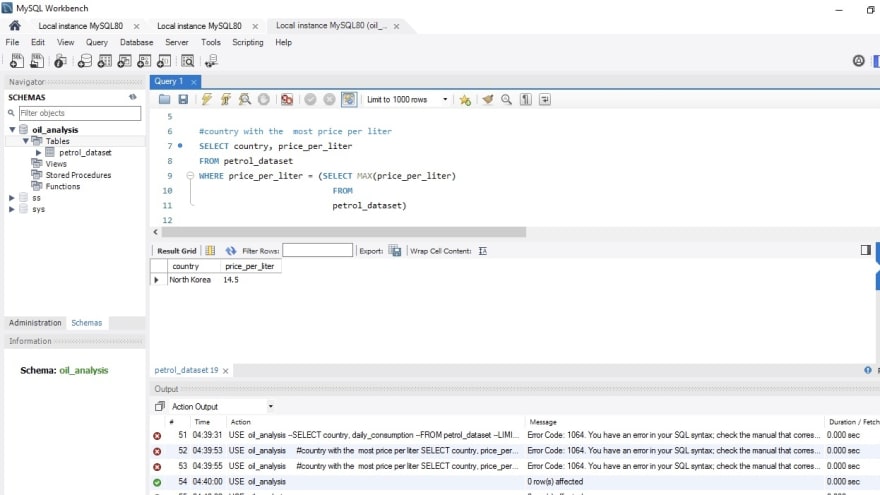 2.Country with the least price for a liter of petrol/gas: 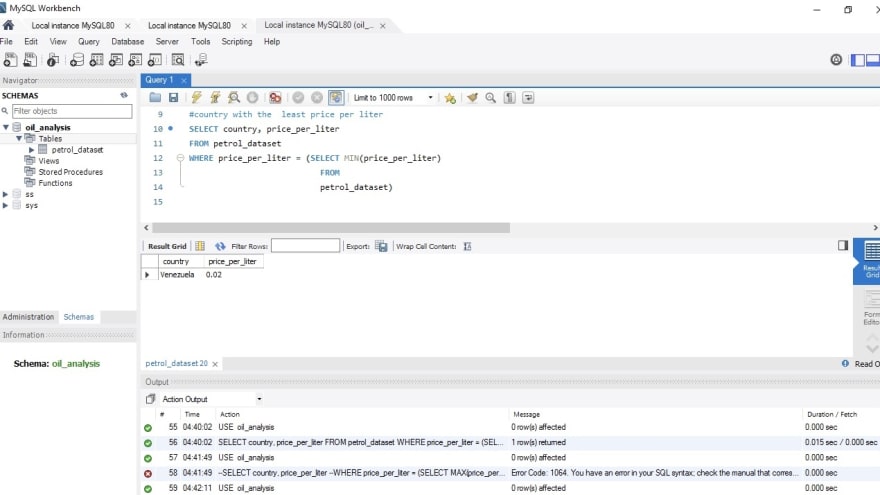 Venezuela sells the cheapest petrol/gas in the world, with a liter going for a paltry $0.02 dollar.

3.Country with the highest and lowest price per gallon : 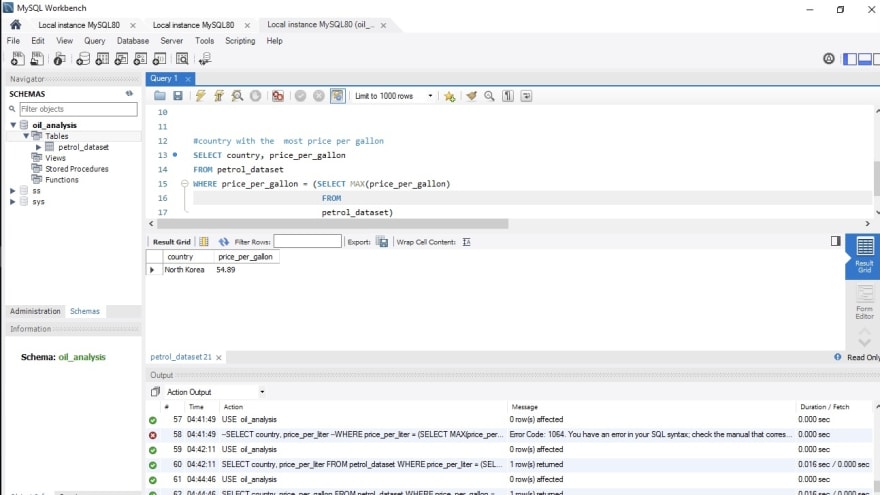 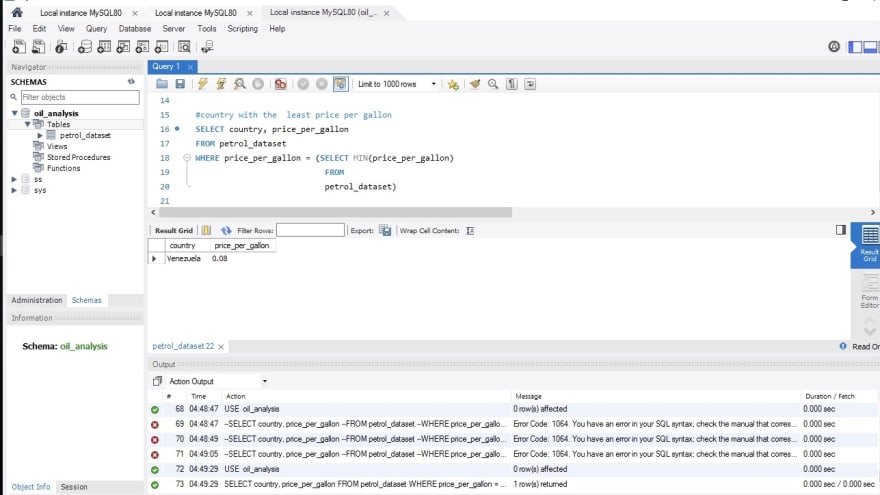 Consistent with the data above, North Korea and Venezuela sells petrol/ gas for the highest and cheapest price per gallon respectively.

4.Top five countries with the most expensive price for a liter of petrol/gas: 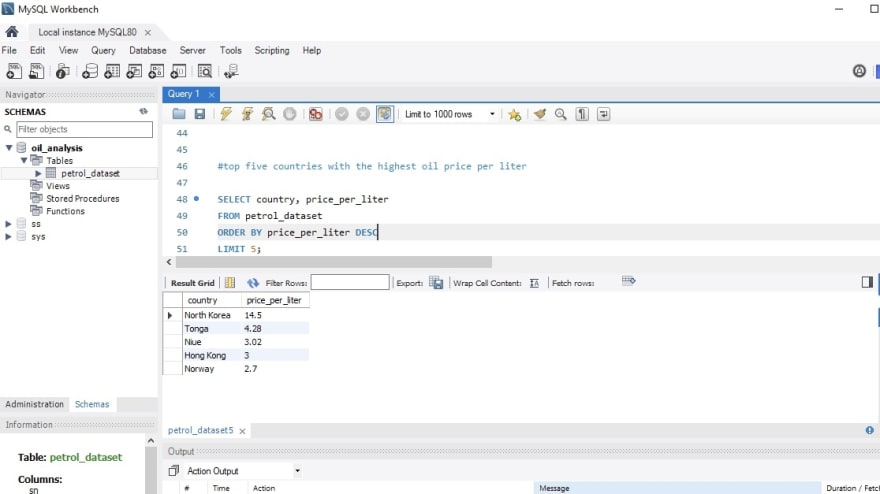 North Korea, Tonga, Niue, Honk Kong, and Norway sells a liter of petrol/gas for the most expensive amount.

5.Bottom five countries with the cheapest price for petrol/ gas: 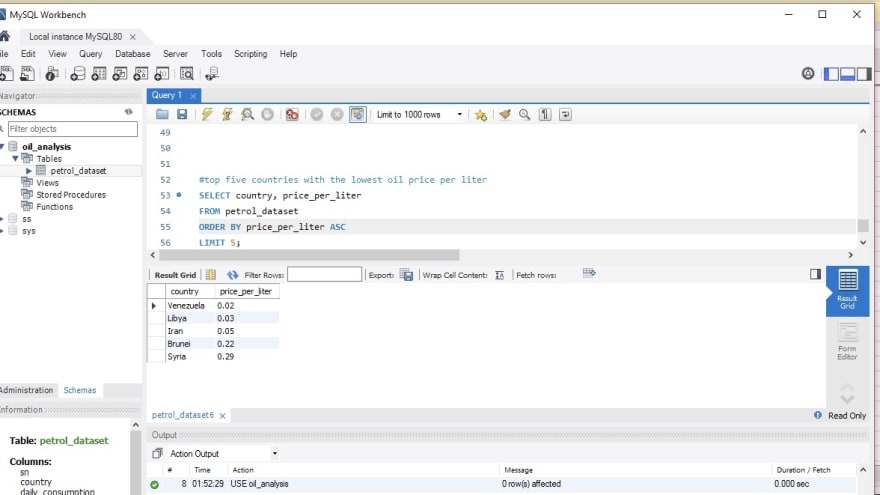 Venezuela, Libya, Iran, Brunei and Syria sells a liter of petrol/ gas for the cheapest prices.

Comments and suggestions, please do send a mail: heyfunmi@gmail.com

Game Of Life in Python

Once suspended, heyfunmi will not be able to comment or publish posts until their suspension is removed.

Once unsuspended, heyfunmi will be able to comment and publish posts again.

Once unpublished, all posts by heyfunmi will become hidden and only accessible to themselves.

If heyfunmi is not suspended, they can still re-publish their posts from their dashboard.

Once unpublished, this post will become invisible to the public and only accessible to Oluwafunmilola Obisesan .

Thanks for keeping DEV Community safe. Here is what you can do to flag heyfunmi:

Unflagging heyfunmi will restore default visibility to their posts.