TL;TR: This post turned out to be quite long and boring. You may skim through it and go to the next one. There will be a recall with all essential info. All next posts are much more bite-sized and lightweight.

In the previous episode we finished with the React repository setup.
In today's episode, we'll scratch the surface of the actual source code and reverse engineer probably the most well-known React snippet.

What we learned in the previous episodes

The React monorepo contains a lot of React-related packages, including React core, renderers, reconciler, utility packages, devtools, and testing utilities.
Some of them (like react, react-dom and react-reconciler) are more relevant for developing a good understanding of React source code as a library for building UI in browser environment.
Others are related to more advanced stuff, like testing, tooling, or React Native, and only relevant if we would explore React with its toolset.

Knowing all this, we are ready to dive straight into the code.

It's hard to come up with the right approach for exploring React codebase, mainly because it's tremendously huge and complex in its current state.
I've already tried to do it a couple of times head-first without an approximate understanding or a plan of how to do it.
This time, we'll try it another way.

We'll try to discover the codebase in the most logical way, I could come up with. We won't do the "start with the package.json, find an entry index.js file and move from there" because it's extremely hard to not get lost this way.
Instead, we'll start with the simplest React code, which most of us have seen dozens of times, and reverse engineer it with the help of the real React source code.

This approach keeps things simple, follows a gentle learning curve and allows you to start with the most practical and intriguing stuff. It's similar to how we create production-ready code, starting with the outline of a solution and going into details on demand. Simply put, we forge our own path from the basics to the final destination, not the other way around.

Materials for the episode

I set up a repository on GitHub for this series. We'll explore, experiment, and play around there.
It's a monorepo (yeah, like the React repository), so it will contain a directory for each episode from now on.
Clone the repo to your local machine.

Or open it in your favorite online code editor, like Gitpod or CodeSandbox.

In the repo you'll find a directory for the current episode, called ep3 with the simplest possible React setup. It's just an html page, where react and react-dom is added through unpkg.

And js file with a well-known setup, that you can find in virtually any React web application source code in some way or another.

Such a simple setup declutters our experience of investigation. It removes complexity, that modern frontend tooling, like webpack and babel introduce for the convenience of end-users. But we don't want to be just end-users, we aspire to develop in-depth understanding, thus we don't need these tools.

Get up and running

Now we need to spin up the index.html in the browser.
I use http-server, but you may use your favorite one, like live-server from VSCode or Python http.server.

The first thing, that we see is an error like this.

This error occurred because we use JSX without an appropriate tool, like Babel to compile it. So we need to "compile" JSX ourselves.

What Babel does internally is pretty straightforward. It replaces JSX with calls to React.createElement or other function if it was explicitly specified with special annotation syntax.

So after the transpilation phase happened the code looks like plain old JavaScript. You may double-check it in Babel REPL. 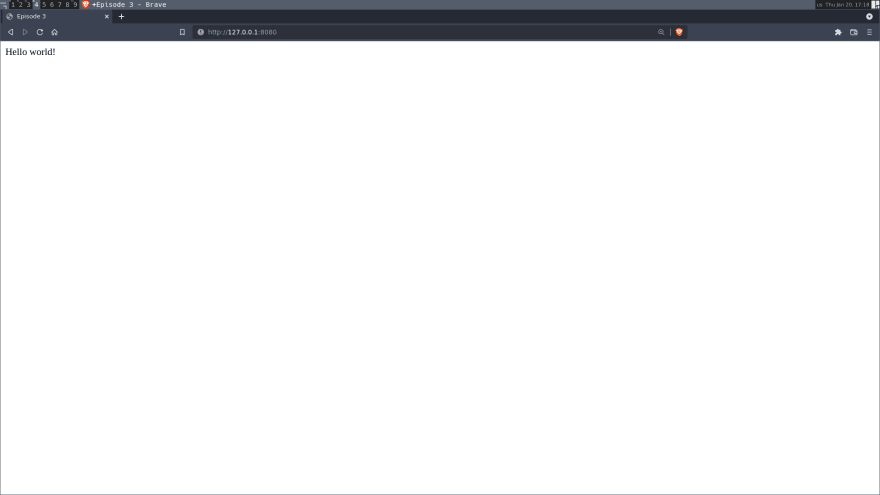 Now we see our Hello world example and may finally go on!

Our goal for today's and the next episode is to grasp how react-dom mounts the tree of React components to the real DOM. It's important to understand this process, because it's the first thing, that you initialize in React app.

Let's form a hypothesis to start with.
I assume from my understanding of how real DOM works, that react-dom traverses a tree of React components (virtual DOM), formed by react package.

Then react-dom creates a real DOM structure, based on the virtual DOM.

Then react-dom mounts the result in provided container.

Now we'll test the hypothesis and find out whether we were right or not.

What React.createElement does and how it works?

First of all, let's check out how React.createElement actually works and what it returns. We already know, that it relates to the react package, thus let's check the packages/react directory.

Here it is, so then find the place from where it's exported.

As you can see, createElement's value differs, based on __DEV__ global variable, which in turn defines whether code was compiled in so-called development mode or not.

Based on the name of these two functions and the meaning of the __DEV__ variable, I assume, that the createElementWithValidation does additional validation to provide meaningful error messages and warnings in development mode. And createElementProd is probably more performant and generally tailored towards production use.

Firstly let's check the former assumption by introducing an error in our React app. We provide a null value instead of the actual valid type.

Great, now we see a typical React warning and can easily trace where it was initialized.

The place, where it was initially called is our createElementWithValidation function, so click on the react.development.js:2240 to see the actual code. 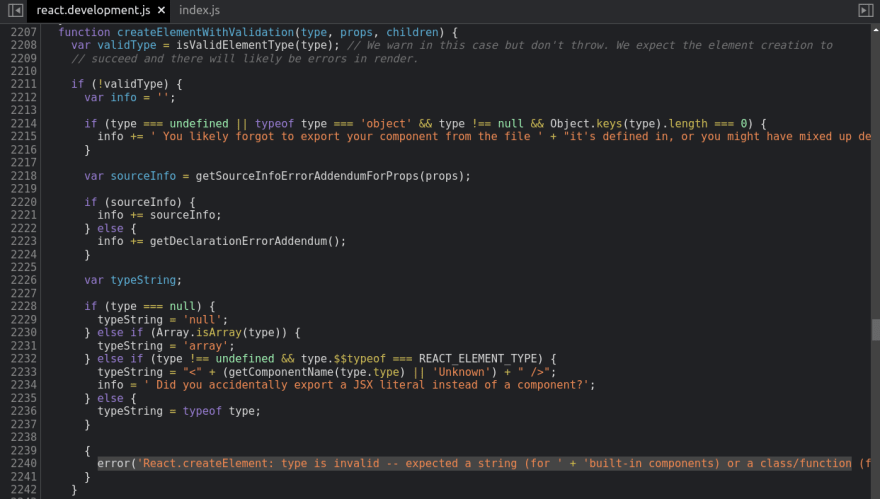 It becomes clear from this code snippet, that our first assumption is near the truth. createElementWithValidation checks whether provided type is valid and if not throws different warnings, based on what exactly is wrong with provided type.

Sidenote: You may ask, why is there such weird statement in the code?

Simply put, it's a block statement, but without if condition.
if statement was stripped out by webpack, because it's a development build, thus all warnings and errors must show up.
This topic is a bit out of scope of the article, for more info check out my Twitter thread.

Now let's remove the error and observe what else happens inside this function.

The first interesting bit here is how error handling is implemented, there is even a comment about it right after the validType variable.
React developers don't throw an exception in case the type is invalid, instead, they proceed but expect some errors in the render.
We know that render in React is handled by renderers, in our casereact-dom.
So from this, we can assume, that there are some validations regarding React components and appropriate warnings inside react-dom itself.

Sidenote: It's an interesting assumption because it implies, that output of the react package is not valid all the time and renderers need to validate, what they get from it on its own.
We'll definitely test this assumption in one of the next articles.

Let's continue with the function. After the initial check, it calls the more general-purpose createElement function.

So, this fact probably indicates, that there is a single createElement function, which actually creates the element. And createElementWithValidation and createElementProd are only wrappers, that add some extra functionality.
We'll test this assumption after we are done with current observations.

Here we see the check against null with type coercion and the useful comment.

This snippet shows, that element can be null or even undefined if "a mock or a custom function" is used.
It's hard to say for sure now, how custom function can be used here, because createElementis hardcoded, but we definitely will figure it out later.

Sidenote: Right now I can't fully understand what's the TODO part means. My initial guess is, that this check could be removed, whenever null or undefined won't be allowed as a value of the element.
If you have a better idea of what it means, write it in the comments section! I would be grateful.

Next thing is a validation of child keys.

From the actual snippet, we can conclude, that key validation only happens, if the initially provided element's type was valid. From the first two sentences of the comment it becomes more obvious what's the reason behind such behavior. validateChildKey doesn't expect a non-string/function type and as a result can throw confusing errors, that would differ from the production version.

Sidenote: it's a bit mind-blowing for me, that key validation logic requires the type of the element to be valid because at first glance they seem mostly unrelated.

From the third sentence of the comment we again see, that proper error handling is expected from a renderer, instead of the react package.

Finally, functions ends with some other validation and a return statement.

Here we see a simple return and two separate validations before it:

So we can conclude, that prop-types validation happens here and props validation is handled differently if the element is fragment.

Let's get back to our packages/react/src/React.js and trace from where createElementProd is exported.

We can use the standard feature of modern IDEs to find where createElementProd is implemented or just check the imports at the beginning of the file. I'll use the later method.

With our new knowledge about this whole create-element situation, we just need to figure out what createElement returns to understand how elements are created in both the prod and dev environment.
To do this let's jump to createElement function from its call inside createElementWithValidation.

And put a debugger breakpoint right after the return statement.

Finally, we see what we get from the React.createElement call. Now let's fix the inaccurate part of the hypothesis to reflect our new knowledge.

I assume from my understanding of how real DOM works, that react-dom traverses a tree of React components (virtual DOM), formed by react package.

In reality the tree of React components looks more like this.

Where we were wrong in the original version?

But overall the first part of our hypothesis was pretty accurate! We just broaden it and fix minor issues.

It was a long journey and we learned a ton today!
In the next episode, we are going to continue with our hypothesis. More precisely we'll try to find out what exactly react-dom does with virtual DOM and how the render actually works.
So I'm looking forward to seeing you in the next episode!

What we learned today

IMO, the main thing, that we learned today has nothing to do with React's inner workings. It is rather the approach we can take to understand how some code works under the hood.
So, I hope you'll apply it yourself!