tl;dr? Feel free to skip ahead to the installation guide below.

Back when I was a kid I used to run Folding@Home on our old family computer -- a silver Gateway tower with a 1.8 GHz Pentium 4. I'm not sure how I found out about it, but I remember being inordinately excited by the prospect of contributing CPU cycles to simulate protein folding and help discover cures for cancer and other diseases. Yeah, I was a nerd. 🤓

Anyways, I kind of forgot about the project until this past year -- thanks to Covid-19. 😒 In addition to the typical work units, Folding@Home was now distributing work to help researchers better understand the SARS-CoV-2 virus (you can read more on that here!). So once again I did my civic duty and fired up my computers to contribute!

My desktop with its GTX 1070 graphics card chewed through simulations like crazy -- leagues faster than the old Gateway ever could. It got me wondering, though, "How would my Raspberry Pis fare?" I've got a ton of these suckers sitting dormant these days, both from my Pi Kubernetes cluster and the Raspberry Pi fan performance tests that I conducted. Rather than collect dust I thought it would be fun to put them to work (even though it's probably not an efficient use of power). After all, they're probably just as powerful as that old Gateway PC.

Unfortunately, when I first looked, no folding client existed for ARM processors. After all, why would the Folding@Home developers waste time building the software for low power ARM devices when desktop x86 processors and GPUs can run circles around them? I decided to search anyway and forum posts like these started to give me hope. And sure enough, now it is!

Here's what it takes to start folding on a Raspberry Pi.

You'll need a Raspberry Pi with a 64 bit processor to be able to run Folding@Home. A 3B or 4 will do nicely. Folding uses around 500MB of RAM so you'll be good with either a 1GB or 2GB model. These days, I recommend the Raspberry Pi 4 in either its 2GB or 4GB configuration for the best bang for your buck.

In addition to your 64 bit Pi, you'll need a 64 bit OS to run the arm64 Folding@Home client. The typical Raspbian/Raspberry Pi OS is 32 bit (since until recently Raspberry Pis did not have more than 4 gigs of RAM), so you'll need to download it specially.

You can find the latest ones here:

I chose to go with the "lite" option since I run my Pis headless. Next install it as you normally would (follow these steps if you need help!).

I usually do a few more things after flashing the OS image to the SD card. Namely, I...

This way I can quickly log on to my router, see what IP it gave the Pi, and connect to it over ssh. 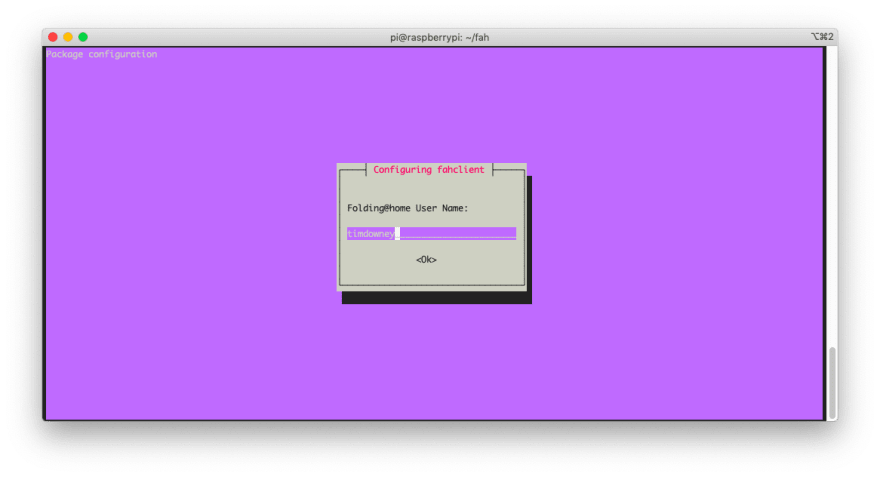 Open up a terminal or ssh on to the Pi and make a new directory in your home directory called fah where we'll download the client (you can name this directory whatever you want).

Now, download the arm64 Folding@Home Debian package. At the time of writing this, the latest version was 7.6.21, but you can find the most recent ones here.

Now install it! This will pop up a fancy interface for you to input your username, team number, and passkey (if you've got one).

It will also ask if you want to run it as a service automatically on start up. If you choose this you'll be able to see an entry for FAHClient.service under your systemd services. You can always change your config later by editing /etc/fahclient/config.xml.

That's it! If you ever want to uninstall Folding@Home from your Pi, just run sudo dpkg -P fahclient.

These things get pretty hot under heavy load, so I decided to test out three different configurations to see what kind of cooling was necessary to fold at max power without thermal throttling. I recorded temperature and clock speed stats while folding using the same script that I used in my cooling experiment.

The amount and difficulty of work distributed by Folding@Home is variable so I let the Pis run for two weeks to see what they could accomplish. 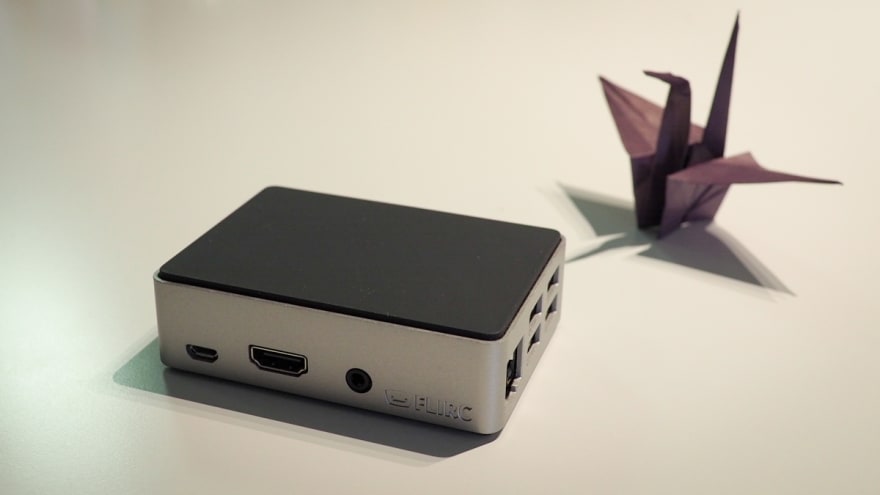 First I tried out an old Raspberry Pi 3B that I had lying around. It's in a passively cooled aluminum Flirc Case that does a pretty decent job of keeping the CPU cool under normal usage. Even at 100% CPU usage during folding the Pi only reached 67C. Not that cool, but not hot enough to throttle either. 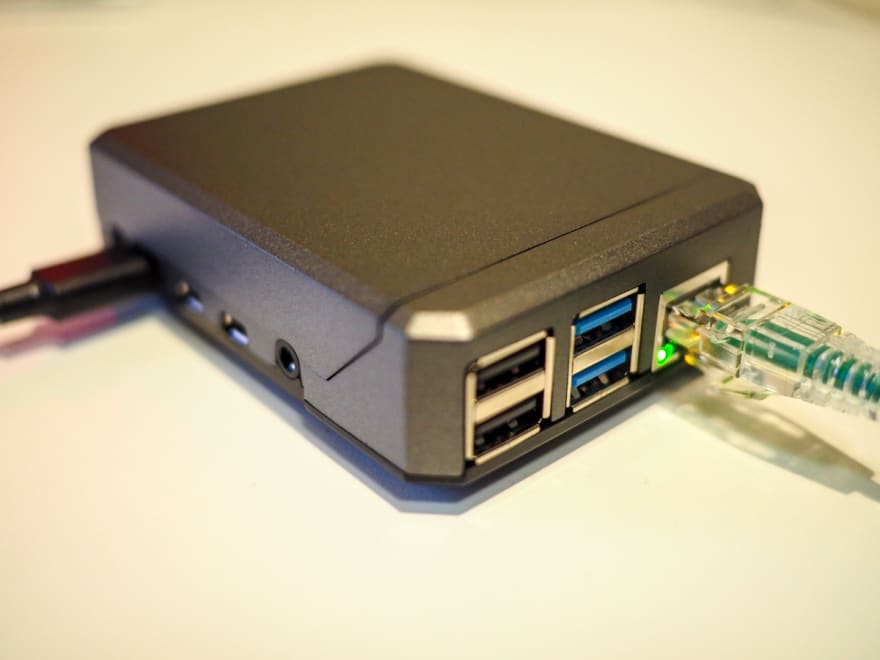 Next I tried one of my Raspberry Pi 4Bs, this one in an aluminum Argon NEO case that's pretty similar to the Flirc case on the 3B. Raspberry Pi 4Bs run both faster and hotter than the 3Bs did so I was curious to see if passive cooling was enough. In the cooling experiments I had done, under heavy synthetic load the 4B would have to throttle its CPU in this case. Fortunately, this was not the case for folding. It was able to keep running at a full 1.5 GHz, albeit at a toasty 72C.

Raspberry Pi 4B with Tower Cooler and 40mm Fan 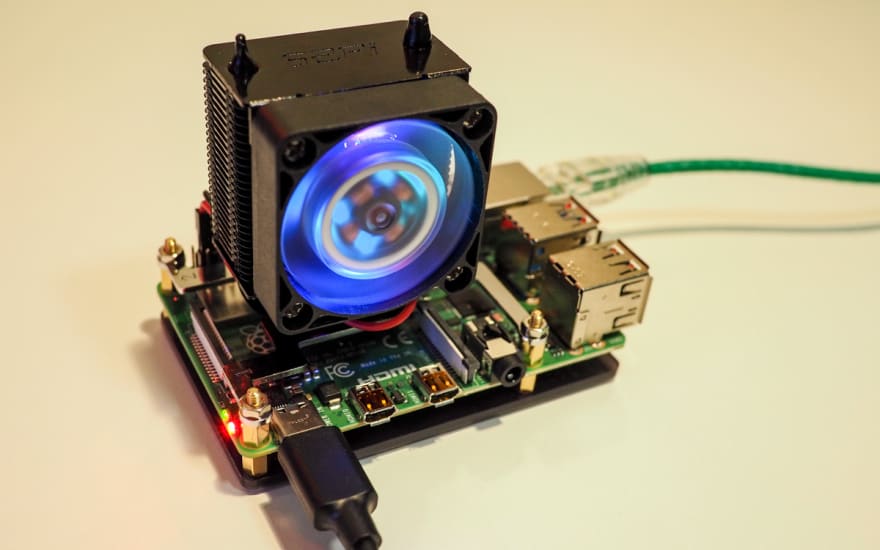 My last experiment used another Raspberry Pi 4B with a ridiculous cooling tower. This one did great during the cooling experiments so I expected it to perform decently for folding as well. Sure enough, it did. It was able to run at a steady 1.5 GHz and keep at a balmy 42C. This one could probably be overclocked to 1.6 or 1.7 GHz in order to eke out a tad more performance, but given the variability of work units it would be difficult to compare. It was able to complete more work than the other 4B, but given that it wasn't being throttled I'll just chalk that up to luck.

So, to wrap it all up, a modern desktop CPU and a GPU could smoke these Pis... and that's ok. I had fun waking up these long dormant little computers and that was worth it to me. If you've got an unused Pi sitting around consider putting it to use for a little bit as well. Maybe it will help cure something! 😊