There are 23 classic design patterns which are described in the original book Design Patterns: Elements of Reusable Object-Oriented Software. These patterns provide solutions to particular problems often repeated in software development.

In this article, I am going to describe how the Builder Pattern works and when it should be applied.

The builder pattern is a design pattern designed to provide a flexible solution to various object creation problems in object-oriented programming. The intent of the Builder design pattern is to separate the construction of a complex object from its representation — Wikipedia

The following code shows the classic problem in which there is a constructor with a list of parameters that must be initialized, even though the object in question does not require to have values in some of its attributes.

The Builder pattern allows us to write clearer code, since it avoids the problem posed above. The UML diagram of this pattern is as follows:

The classes that make up this pattern are the following:

These classes will be responsible for clarifying the differences between the business logic of each of the object construction processes.

1 - The client uses the ConcreteBuilder, executing the construction steps one by one.

2 - The client uses the Director which implements each of the construction processes, and acts as an intermediary between the Client and the ConcreteBuilder classes.

Builder Pattern: When To Use

The Builder pattern has a number of advantages that can be summarized in the following points:

However, the main drawback of the builder pattern is the increased complexity in the code, and the increased number of classes required. This a well known disadvantage when applying design patterns, since this is the price that must be paid in order to gain abstraction in the code.

Next we are going to illustrate three examples of application of the Builder pattern:

The following examples will show the implementation of this pattern using TypeScript. We have chosen TypeScript to carry out this implementation rather than JavaScript, since the latter lacks interfaces or abstract classes and therefore, the responsibility of implementing both the interface and the abstract class would fall on the developer.

In this first example we are going to translate the theoretical UML diagram into TypeScript code to test the potential of this pattern. The diagram to be implemented is the following: 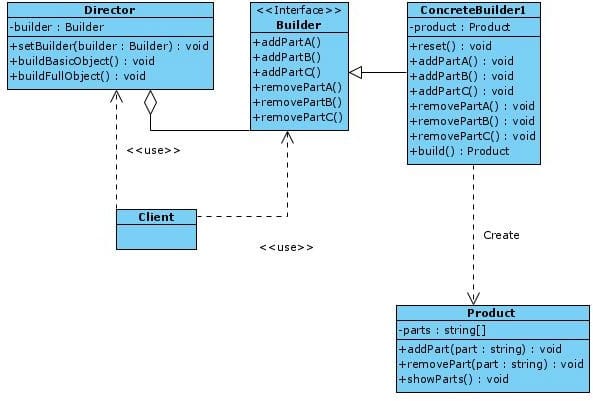 First we are going to define the model (Product) of our problem. In this class it is modeled that we will have a list of parts that is simply a list of strings . For this we define the classic addPart, removePart and showParts methods to manage this attribute.

However, note that the constructor of the object does not receive the list of initial parameters (in TypeScript it is not necessary to define it), but the model attribute will be modified through methods.

The next step is to create the builder interface that defines the concrete builders. In the builder, the operations to add and remove each of the parts (A, B and C) are defined.

The concrete builder class has a private object of the class that we want to build (Product). The necessary modifications will be applied to its attributes to build the object according to each case.

Once we have the concrete operations to build an object through the ConcreteBuild1 class, the next step is to define concrete steps to perform different constructions. The Director class is responsible for defining methods that specify the construction steps using the Builder object.

Therefore, the Director class receives an object from the Builder class as a parameter (in this case it would be BuilderConcrete1) and several constructions are defined:

Finally, it would be necessary to define the Client or Context class that makes use of the pattern. This client is quite clean since you only define the Builder object that you want to use and the creation of objects is invoked through the Director.

Example 2 — Creation of Heroes of a video game

Once the classic theoretical example has been presented to understand the responsibilities of each of the classes of the pattern, we are going to present another example in which we identify each of these classes with a specific problem.

Our problem is the representation of different heroes or characters in a video game. We will focus on the classic WoW (World of Warcraft) game, in which the heroes can be divided into two races: Humans and Orcs. In addition, each of these heroes can have armor, weapon or different skills depending on whether the hero is human or orc.

In the event that the Builder pattern is not applied, it causes a constructor to be defined in the Hero class with a long list of parameters (race, armor, skills...), which in turn, cause logic to be defined in the constructor to decide if the armor is human or orc. So, with this initial solution the problem is coupled since any change in the business logic would make rewriting quite a few pieces of code, with hardly any possibility of reuse.

In the event that the Builder pattern is not applied, it causes a constructor to be defined in the Hero class with a long list of parameters (race, armor, skills...), which in turn, causes logic to be defined in the constructor to decide whether the armor is human or orc. With this initial solution the problem is coupled, since any change in the business logic would require rewriting quite a few pieces of code, with hardly any possibility of reuse.

Therefore, the first thing we have to do is stop and think about how the Builder pattern helps us solve this problem. So, we focus on showing the UML diagram that solves this problem and we begin to implement it. 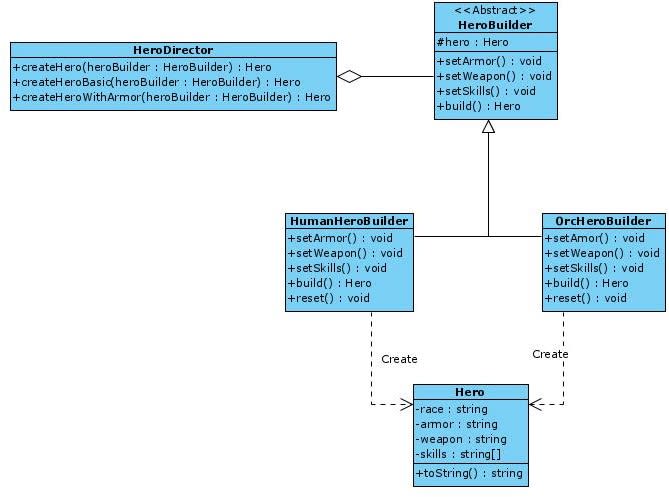 The Hero class defines the race, armor, weapon and skills properties which in our example for simplicity are simple character strings. All these attributes could be objects but to simplify the example we have left them as character strings.

The HeroBuilder interface defines the methods that the specific builders will have. Let’s observe that we will have the Hero object that will be configured little by little, each of the methods that allows the configuration of the object: setArmor, setWeapon and setSkills; and finally we will have the build method that finishes the configuration of the object and extracts the Hero object.

Once the builder is defined (as an abstract class or interface) we must build the two specific builders that our problem requires: HumanHeroBuilder and OrcHeroBuilder. In the demo code we have completed with a different string according to each builder. It is important to note that the build method of each of the builders will return the built object (Hero) and reset the state of the object to be able to build another object.

The last element of the pattern would be the Hero-Director class that allows you to store configurations that are repeated throughout the code. In our example we have created three Hero creation setups. For example, the createHero method builds a complete hero, that is, it assigns armor, abilities and weapons. In addition, we create a hero without any equipment through the createHeroBasic method and, finally, to illustrate another configuration, the createHeroWithArmor method is defined, which returns a hero in which only the armor has been assigned.

In the following example we are going to create a POS for a burger restaurant. The main change in this example compared to the previous ones is that each modification operation of the object to be created, instead of not returning any value, will return the builder itself. In this way, the different operations to be carried out by the builder itself can be chained, since each operation returns the Builder object.

Following the same methodology that we have presented in the previous examples, we are going to start by looking at the UML diagram that will help us identify each of the parts of this pattern. 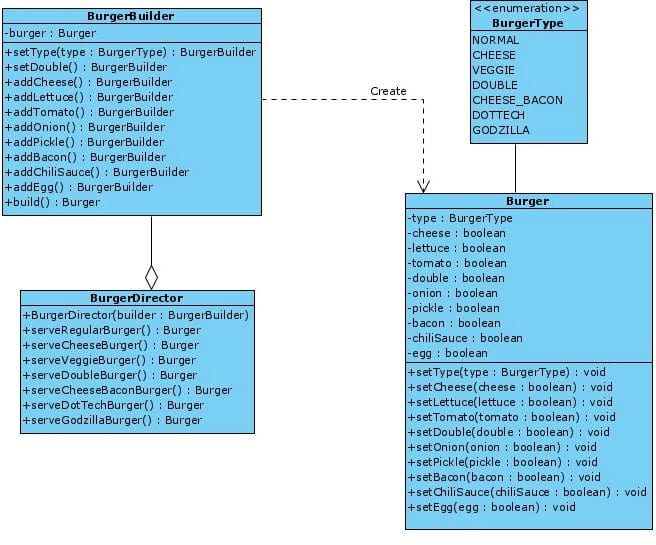 The code associated with this class is the following:

In this example, the BurgerType enumerated type has been included, which allows defining the different types of burgers that exist in the application.

In the BurgerBuilder class, each method performs the modification on the object that is being configured, and also, the builder is being returned to be able to chain the different operations. Of course, the build method still returns the Burger class object.

The BurgerDirector class is in charge of configuring the operations defined in the BurgerBuilder class. This is where you can see how different types of burgers are configured using the chained methods, which allows for ease of reading the code. It is important to remember that until the build method is executed, the same burger is being configured.

Finally, we show the client that uses the pattern. In this case, a random number is selected that defines a type of burger and the director is invoked to serve us that burger.

Finally, I have created three npm scripts through which the code presented in this article can be executed:

Builder is a design pattern that allows you to avoid having constructors with a long list of parameters in which not always all the parameters are required. It allows you to build instances of a certain object in a more flexible way, since you can configure only the attributes that are strictly necessary.

The code is much cleaner since there will be no parameters in the constructors that are not used, allowing only those parameters that are required to create the object to be used. Furthermore, since there is a Director class for the builders, the object creation configurations are reused so that there is no direct interaction with the Builder classes on the client.

Once suspended, carlillo will not be able to comment or publish posts until their suspension is removed.

Once unsuspended, carlillo will be able to comment and publish posts again.

Once unpublished, all posts by carlillo will become hidden and only accessible to themselves.

If carlillo is not suspended, they can still re-publish their posts from their dashboard.

Once unpublished, this post will become invisible to the public and only accessible to Carlos Caballero.

Thanks for keeping DEV Community safe. Here is what you can do to flag carlillo:

Unflagging carlillo will restore default visibility to their posts.