A lot of people who use Godot's Visual Script don't know how to call a function in another script.

Well, that's easy! You can just drag and drop a scene node, which is attached to the script, into the canvas as shown in the screen recording below:

A proper way to do it

Imagine if you have to call a function from another script a hundred times, but you need to change the structure of the scene node to which the script is attached later, then you'll definitely have a serious problem of having to edit those hundred nodes.

Therefore this is how you do to prevent it: 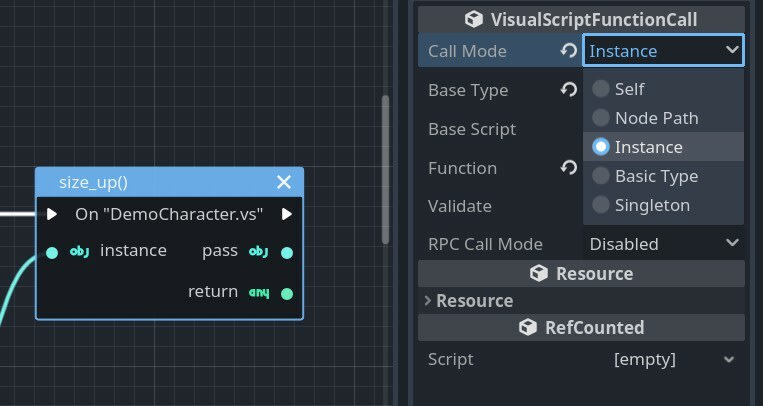 Now, if you need to change anything to this scene node that you want to call a function from, all you have to do is change just one node in the _ready function, instead of a hundred nodes in the canvas!

I hope this helps 👍

Archer Allstars
I am nobody. I am just interested in game development, OSS, and Linux.
Fedora 36 Review, a few issues that still need to be fixed
#opensource #beginners #productivity #linux
I have been using Fedora 36 for a month, here is my review.
#opensource #beginners #productivity #linux
How to get a variable value from another script, Godot's Visual Script
#tutorial #codenewbie #gamedev #beginners

Thanks for keeping DEV Community safe. Here is what you can do to flag archerallstars: