Godot is yet another game engine other than Unreal and Unity. But it is completely free and open-source. This means no strings attached, no royalties, nothing. Your game is yours and yours alone.

Why would you use Godot?

The engine doesn't have the ultimate 3D capabilities like Unreal. And you also can't export your game to console devices. Then, why use it?

I can tell you from my personal experience with Godot that my game development is very smooth so far with it. The official showcase video will show you what kind of game you can expect to make out of the engine.

Which Godot version should you use?

If you start developing your game today, you can use Godot 4 alpha for that, as your game will grow with it. As of alpha 6, it's very stable already. You can expect feature changes though, hence the alpha tag in the name. But by the time you published your game, the engine would be at least at the beta or even stable state, and the bugs related to the Vulkan rendering are likely to be fixed by then. There's no need to use relic technologies found in Godot 3.

Therefore I will continue my Visual Script tutorial based on Godot 4.

What is Visual Script?

Visual Script is another way to code your game but doesn't require you to do a single line of code. Instead, you do code by connecting various logic nodes. The most popular form of Visual Script is Blueprints from Unreal Engine.

The purpose of Visual Script is to make it easier for everyone to code. Visual Script is easier to learn and understand than C++, that's for sure. And that's the reason why Epic introduced Blueprints in Unreal Engine.

In Godot, Visual Script is called Visual Script. You can learn some basic usage from the official docs (it's a little bit outdated and lacking though).

What is the Visual Script's flow?

Visual Script nodes that you will use a lot!

In this article, I will show you guys some very important nodes that most of you will use all the time as Visual Script users.

This node filters out the object at the input port, then if it matches the criteria you set in its Base Type, the action along with the filtered object at the output port will be triggered. 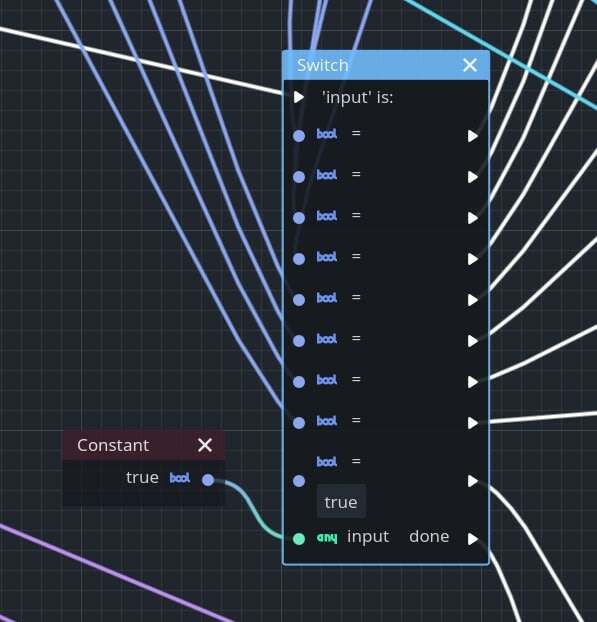 If you need to use many condition nodes (if, else) in the same flow, you would rather use a switch node instead of a condition node. A switch node will reduce your nodes on the canvas by a lot, hence makes it easier for you to read the code. Use it whenever you can! 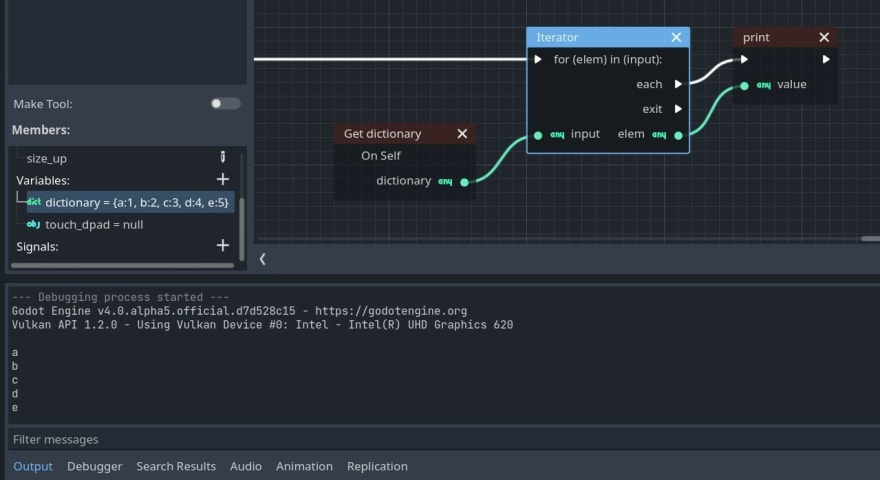 In the above screenshot, I run the iterator in the _ready function. It prints all the keys in the dictionary in a single flow.

This node can save you a tons of operator nodes (add, subtract, multiply, divide, and etc.). If you do a very complicated calculation in a flow, you would rather use this node instead.

The constructor and deconstructor are another basic yet very essential node in Visual Scripting. For instance, if you want to construct a vector3 from many floats, then you need a vector3 constructor.

Get and Set Index

The get and set index nodes are very useful to use with array and dictionary, especially, when you want to add a key and its value to a dictionary variable, you would use the set index node like this: 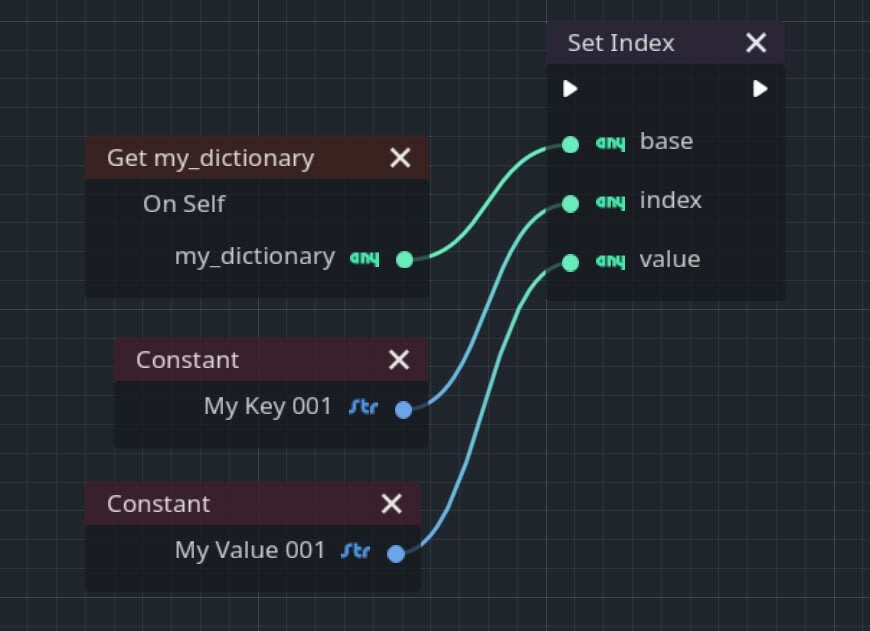 You can get the value of a dictionary variable by using its key from either the get index node or the specific get node from the dictionary type node:

General Get Node with Set Mode set to Basic Type 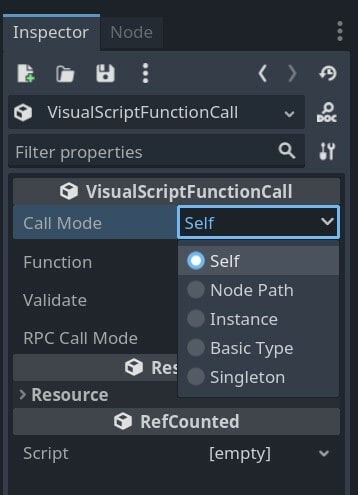 Let's put some nodes above into practice 💪 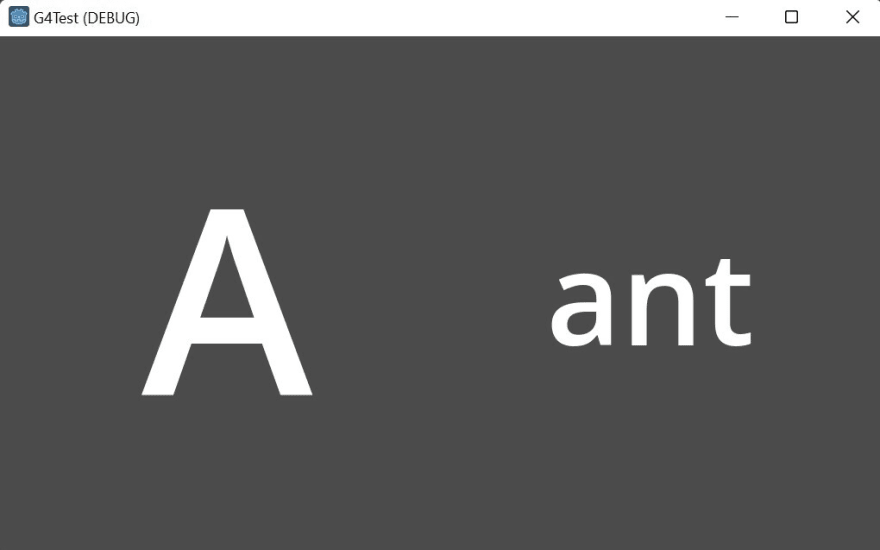 I create a very simple Visual Script practice. The app above will let you type A-Z from your keyboard input and it will return a word corresponding to the letter you typed in. In order to do that, you can follow these steps below: 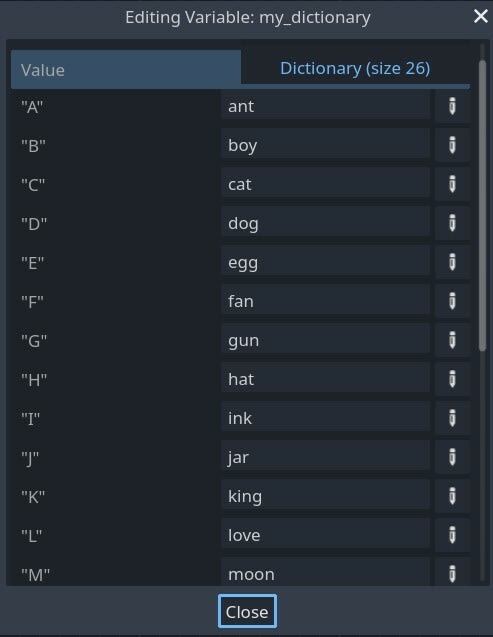 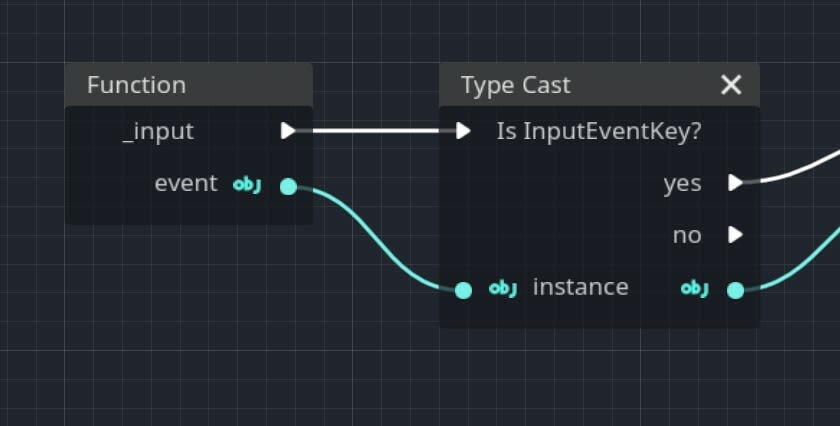 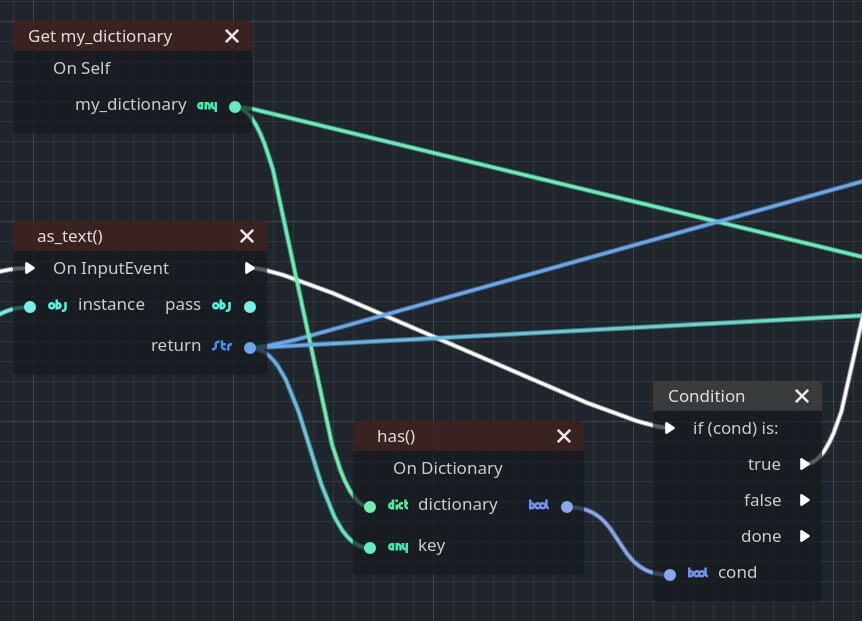 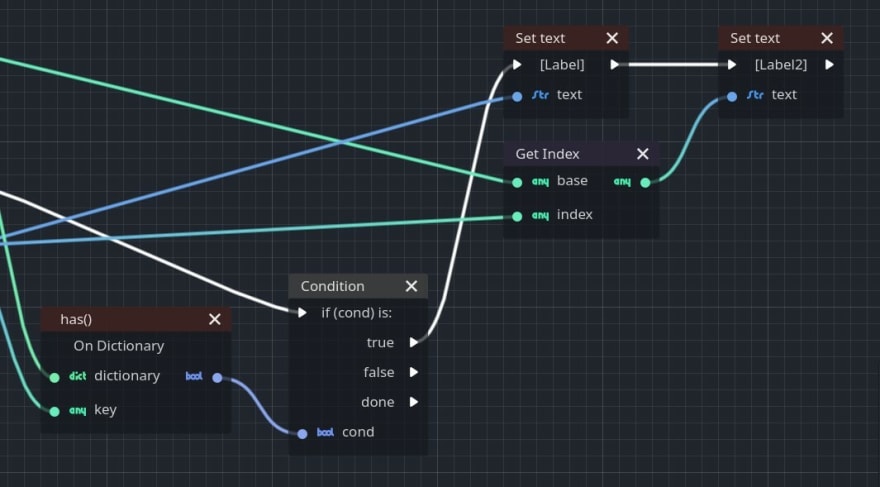 Below you can see all the Visual Script nodes needed to create this little app:

You can download a completed project here. Remember that you need Godot 4 to open this project. I recommend Godot 4 alpha 5 as of this time.

Cover Photo by Photo by Immo Wegmann on Unsplash

Create Your Own AI Chatbot in minutes with Rasa

Archer Allstars
I am nobody. I am just interested in game development, OSS, and Linux.
Fedora 36 Review, a few things that still need to be fixed
#opensource #beginners #productivity #linux
I have been using Fedora 36 for a month, here is my review.
#opensource #beginners #productivity #linux
How to get a variable value from another script, Godot's Visual Script
#tutorial #codenewbie #gamedev #beginners