When I got my Windows computer, the first thing I did was to set up Windows so it mirrors the writing system I had on Mac. I also mirrored Mac's modifiers as much as possible.

Then, I set up my Windows development environment (with Windows Subsystem for Linux) on my new Windows computer.

Next, I had to do was to make Visual Studio Code on both Mac and Windows play nice.

It's easy to sync preferences and extensions. Settings Sync does this automatically. To sync extensions and preferences across my Mac and Windows computer, all I had to do is install the settings sync extension, log in with Github, and, select a Gist to sync to. 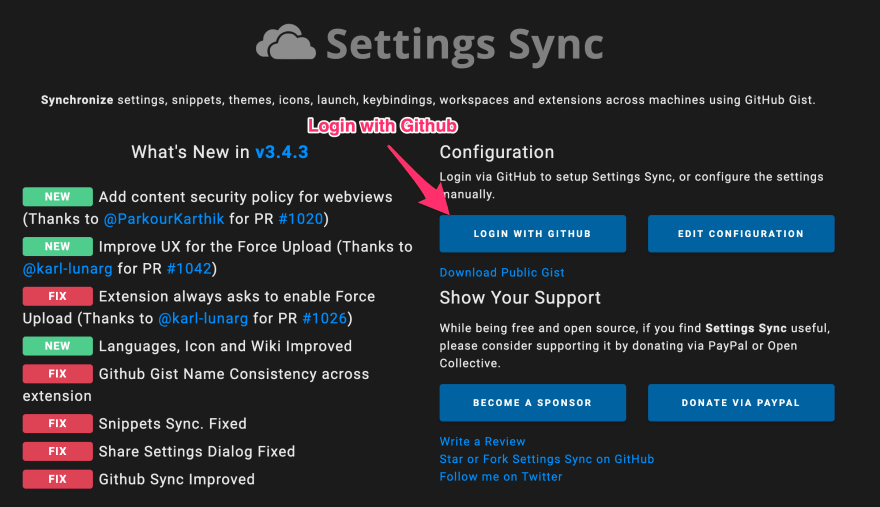 Separating preferences for Windows and Mac

Thankfully, most of my preferences can be shared between Windows and Mac. I don't have to change many things. I only changed the fontSize of the code editor and the integrated terminal between my Windows and Mac.

I changed fontSize because I have a 15' Mac and a 13' Windows. Their screen resolutions were different too. After some testing, I figured I needed the following sizes:

A sync pragma can only be applied to one property (as far as I can tell).

I used the Operating System pragma (os) to preserve preferences between Mac and Windows. Here's what I wrote for Mac:

And here's what I wrote for Windows:

Settings decides whether to apply a property with sync pragmas. If Settings Sync thinks the property should be disabled, it'll comment it out.

For example, anything labelled with os=windows got commented out on my Mac's preferences (the settings.json file).

Likewise anything labelled with os=mac got commented out on my Windows' settings.json file.

So I get to keep the settings I like for both computers. Pretty cool!

I put a ton of effort into customising my keyboard shortcuts. (I'll share them in the next article). And I'm worried my shortcuts will overwrite each other.

Turns out, there's nothing to worry!

So feel free to upload your key bindings without adding any comments. They would NOT overwrite each other.

This, however, means you need to configure key bindings for Mac and Windows separately.

Using ESLint and Prettier with VScode in an Angular Project 🚀

How I set up VSCode for productivity? [Checklist]