Since I code on both Windows and Mac, I want my Visual Studio Code shortcuts to be interchangeable on both systems.

So I dug deep into Visual Studio Code's keyboard shortcuts for both systems and made my personal customisations.

I want to share these customisations with you so you can use them to rock at Visual Studio Code too 😃.

Things you need to know before you continue

Modifiers' locations are different on Mac and Windows.

Modifiers on Mac (Command, Option, Control) and modifiers on Windows (Ctrl, Alt, Win, Appskey) are placed in different locations on the keyboard.

Here's where the original modifiers are located on Mac:

On my Windows PC (which is a Surface Laptop).

I changed modifier locations of my Windows PC with a program called Auto Hot Key. Here's what they look like right now:

You can learn how I changed the modifiers in this article.

All keyboard shortcuts in this article are friendly for Qwerty users.

People who're familiar with me know I use Dvorak-Qwerty on both Mac and Windows.

Since all shortcuts I recommend in this guide involves the Command or Ctrl key. they're useable for all Qwerty users.

This is likely because of two reasons:

But the keyboard shortcut still works. When I press Ctrl + T, I still fire the "Go To File" action.

So, if you use Dvorak-Qwerty, I recommend switching to Qwerty to examine keyboard shortcuts in Visual Studio Code. You can always switch back to Dvorak-Qwerty later.

TL;DR: I removed the Sublime Text Keymap and Settings Importer extension from Visual Studio Code. This allowed me to create keyboard shortcuts that synced up between Mac and Windows.

(It didn't work on my Windows PC because I don't have Sublime Text installed).

I used the Sublime Text Importer when I switched to Visual Studio for the first time. This extension helped me create keyboard shortcuts that I was familiar with in Sublime Text.

I did this when I was on Mac.

Unfortunately, Sublime Text shortcuts did not get synced to my Windows PC because Settings Sync doesn't sync keyboard shortcuts across different platforms.

Then, I noticed Sublime Settings Importer doesn't work on my Windows Computer. It tried to find a Sublime Text application (which doesn't exist). It will never work since I don't intend to install Sublime Text on Windows.

But my Mac has Sublime Text shortcuts and My Windows PC doesn't. This gets confusing quickly. To make my life easier when creating keyboard shortcuts, I decided to uninstall the Sublime Text Keymap and Settings importer extension.

Ok, that's a ton of things you need to know before actually diving into the key bindings. I'm sorry you had to read through the preamble, but some of my bindings wouldn't have made sense otherwise.

From now on, let's jump into the exciting part!

The Go to File shortcut is my bread-and-butter shortcut. It opens a list box that lets you type a file you want to go to.

I changed the shortcut to:

First, open up the keyboard settings preferences. There are three ways:

Method 1: From the menu

Method 2: Use show all Commands

Method 3: Use a keyboard shortcut

Search for Go to file in the keyboard shortcuts panel. You should see one option from the list box on Mac. Change this to Command + T. On Windows, you'll see many options. Change the Ctrl + P one to Ctrl + T.

This creates a shortcut with Command + T.

Next, I brought back Command + P as a keyboard shortcut. To do this, open up keybindings.json by clicking on the third icon from the top-right corner.

Look for workbench.action.quickOpen. You should find two values:

Do the same thing for Windows. You'll see ctrl+t and ctrl+p instead of cmd+t and cmd+p.

I kept Command + P because it's a leftover shortcut I use once in a while (mostly by accident).

On Windows, my Ctrl key is in the position of the Alt key. Since Ctrl is in the same position as Command (on Mac), I'm effectively hitting the same thing on both Mac and Windows.

I open many tabs when I'm coding, so I need a shortcut to switch between tabs.

Look for openEditorAtIndex in the keyboard settings panel. You should find 9 entries (both Mac and Windows). Change this to Command (or Ctrl) + Numbers 1 to 9.

On Windows, my Ctrl modifier sits on my Alt key. This means Ctrl is in the same position as the Command key.

Creating code panels (and switching between them)

It's super helpful to have two (sometimes three) panels to edit code. I use this for referencing code.

For example, I would open a HTML file on one panel. Then, I would open a CSS file on the second panel. Sometimes, I would use a third panel to open a JavaScript file. (But I stick with two panels most of the time).

Visual Studio Code offers a variety of ways to split the text editor. I found focus on editor group the best shortcut because it:

In this example below, I jump from the second panel to the third panel, then back to the first panel. 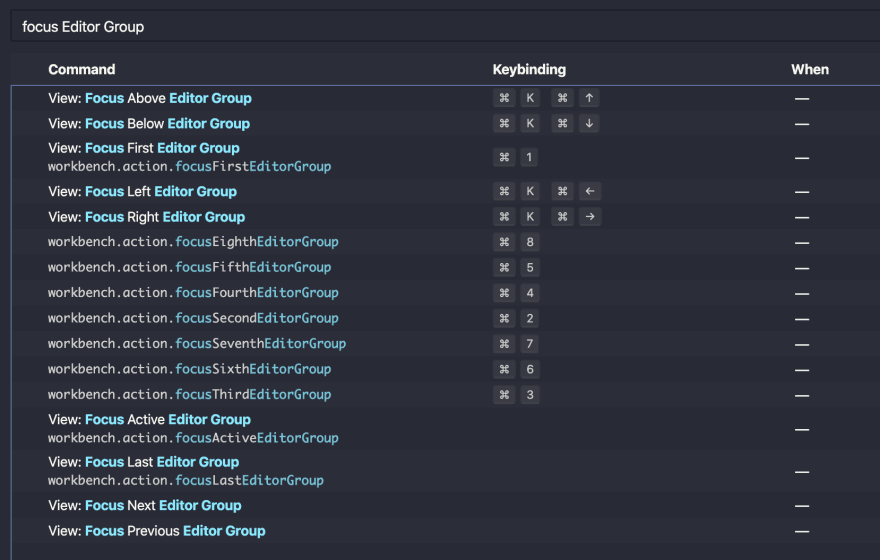 Change the shortcuts to Alt + the corresponding number.

I use up to three editor groups, but I still changed all eight of them to maintain consistency.

Command + Number to switch tabs and Alt + Number to switch panels? That's the best combination I came up with. Alt is right next to Command. It's easy to access. You can see how fast I switched between the panels in the video earlier!

(Ok, I slowed down when I made the video... but you get the point).

On Windows, my Alt is right next to Ctrl. It makes sense. I'm pressing the same buttons on Mac and Windows.

What happens I opened a tab from the wrong panel? This is where Move editor into group comes in handy. It lets me move a tab from one panel to another.

Move editor into group also lets me open up a panel if there are none.

You can even create a Vertical + Horizontal split combination with Move editor into group!

You can move panels (which Visual Studio Code calls editor groups) in 8 ways:

The first four are generally useless. I prioritised the last four.

No default keyboard shortcuts are assigned to the last four actions 😢.

Search for "Move editor into" in Visual Studio Code's keyboard shortcuts panel. You should see 8 entries.

Change key bindings to the ones I mentioned above.

Then, remove the key bindings for previous and next group by right-clicking and selecting "remove key binding". This ensures there are no conflicts between key bindings.

I find that this makes a lot of sense!

Let's say you create an empty panel by accident. You want to close this panel.

Visual Studio Code lets you close this empty panel with the following shortcuts:

I didn't change this shortcut. I just wanted to tell you about this because I find it useful.

I prefer to split the screen vertically. But when I need code gets long, it makes sense to split things up horizontally. This is especially useful for those pesky JavaScript methods with super long names.

Visual Studio Code lets you close this empty panel with the following shortcuts:

I didn't change this shortcut. I just wanted to tell you about this because I find it useful.

That's it for today. I'll share more keyboard shortcuts with you next week.

Keyboard Shortcuts: React in VS Code

Installing a node.js application as a Windows service