Now that we have our Typescript Parse Server compiling and connecting to our MonoDB database, let's get it deployed to Elasticbeanstalk.

Download and install the Elasticbeanstalk CLI and the AWS CLI.

Give your new application a name:

It is helpful here to choose a specific domain rather than letting it auto generate so that we can update our Parse config. Take note of the domain that you give your instance. 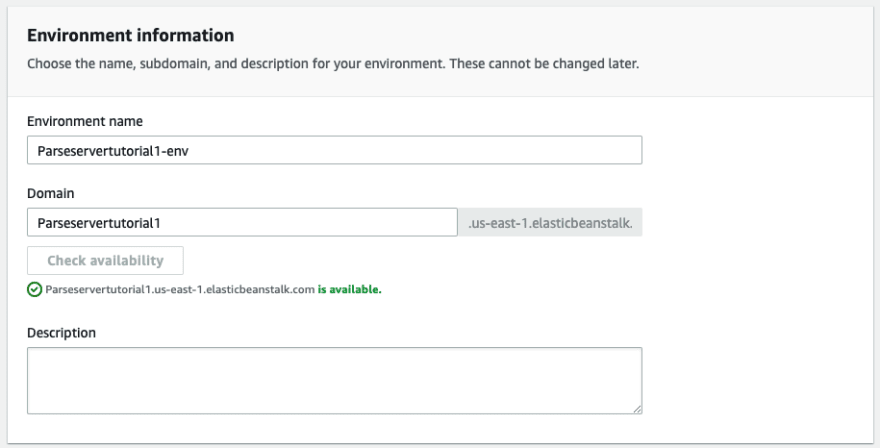 Choose a Node16 environment with the default settings:

Allow the instance to be created with a sample application and click create environment.

While your environment is deploying, navigate to ./.ebextensions/app.config of your Parse Server project and update the SERVER_URL property with the domain you specified.

The ./.ebextensions/app.config file contains all of the environment variables that our Elasticbeanstalk instance will be deployed with.

Here you can add the APP_ID and MASTER_KEY that you want to use for production.

Note that this file should not be checked into git to keep these keys secure.

We can also update the DATABASE_URI environment variable. You can then remove it from ./src/index.js so that we keep our connection string secure.

After the sample code is deployed, we'll need to change the instance type to t2.small.

❗️ This is critical, otherwise the npm install command will fail on the server. t2.micro is too small of an instance for Parse Server.

In the side panel of your Elasticbeanstalk console, choose the configuration option. 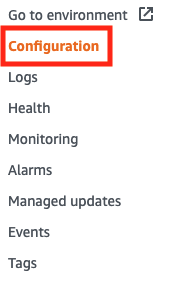 Scroll down until you find the capacity section and choose Edit.

Find the 'instance types' section and remove t2.micro while keeping t2.small or larger.

Initialize our Parse Server as an Elasticbeanstalk instance

In the project's terminal run:

Answer the prompts by selecting the specified region and project name of our new instance when prompted.

Make sure to choose n when asked if you wish to continue with CodeCommit (assuming you are using Github).

Note that eb init will update our .gitignore file automatically for us.

Next, we need to make sure that our compiled javascript gets deployed and not our typescript.

In your root directory, create a new folder called ./scripts/

Add a file named ./scripts/dist.sh and fill it with the following shell command:

Next, move on over to your package.json file and add two new scripts:

You can confirm that everything is working by confirming there's a new .zip file in your ./dist folder.

Now we'll need to tell the Elasticbeanstalk CLI which zip to upload. Head on over to the ./elasticbeanstalk/config.yml file that was generated with the eb init command.

Add a new stage called deploy at the very bottom:

Let's try to deploy and cross our fingers.

But first make sure to commit your changes, otherwise the elasticbeanstalk CLI will not pick them up.

Once the deployment completes, you can test that your Parse Server is running as expected by running the following command:

You should get a response from your ./cloud/functions.ts file with a body of: Hi.

Now you have your Typescript Parse Server running on your Elasticbeanstalk environment!

Remember to set up VPC peering to secure your database connection!

Once suspended, zciwor will not be able to comment or publish posts until their suspension is removed.

Once unsuspended, zciwor will be able to comment and publish posts again.

Once unpublished, all posts by zciwor will become hidden and only accessible to themselves.

If zciwor is not suspended, they can still re-publish their posts from their dashboard.

Once unpublished, this post will become invisible to the public and only accessible to Eric Pietrowicz.

Thanks for keeping DEV Community 👩‍💻👨‍💻 safe. Here is what you can do to flag zciwor:

Unflagging zciwor will restore default visibility to their posts.