In this blog post I would like to show you how to run your Angular application in a Docker container, then I’ll introduce a multi-stage Docker build which will make the container smaller and your work more automated.

Without further introduction, let’s get hands dirty and put an Angular app into the Docker container. For purpose of this blog post I’ll use my old project — aston-villa-app. It’s a simple dashboard with league standings of one of my favourite football club — Aston Villa. 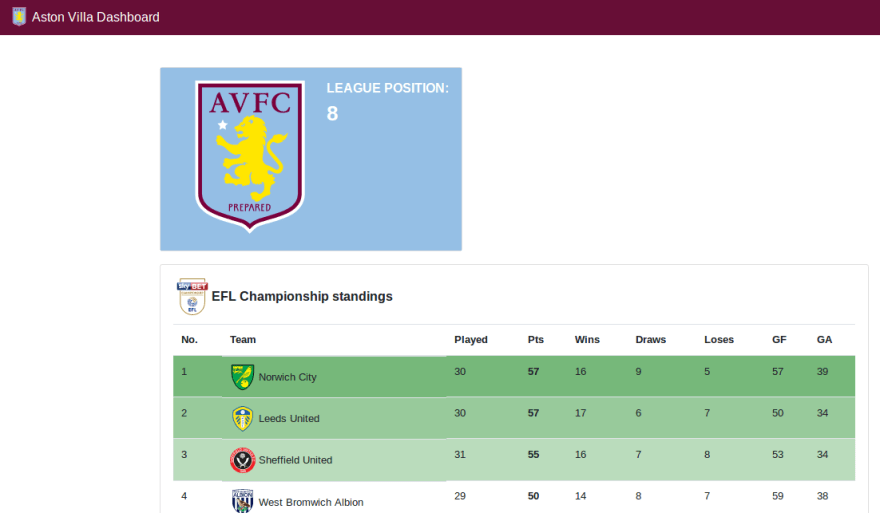 But if you want to use your project you can go with it, all the steps will be the same as for my app.

Ok, so to get my application you’ll need first to clone it, so open a terminal and type:

Now, you’ve got it in your local folder and then enter it. Next make sure that you have installed Node.js and Angular CLI on your local PC. Full instruction can be found on the official Angular website.

Now if you installed both prerequisites you can compile an Angular app. Therefore open a terminal in the root folder of the app and type:

This will result in creation of a new folder called dist/aston-villa-app in which all compiled files are put.

Then create a new file called Dockerfile that will be located in the project’s root folder. It should have these following lines:

This simple Dockerfile will tell Docker to do three things:

My default nginx configuration file looks as follows (it’s located in the same directory as Dockerfile):

I don’t want to go that much into details what each line means here (if you would like there are two very nice links with more explanation at the end of this article). In general, here we define the server on which application will be hosted, its port and default behaviour.

Finally, go back to the terminal and use this command:

If you check the list of locally available Docker images you should get similar output:

To run the image you’ve just created use following command:

With it first you give a name to the container ( --name av-app-container ), then make sure that it will run in the background (-d), next you map container port to your local ( -p 8080:80 ) and finally you pick a base Docker image to be that you’ve just created - av-app-image.

To check if new container is running in terminal type:

Alright! That was easy! Wasn’t it? I hope it was for you, but you could see that it’s a multi step process and as such, beside being time consuming, is also error-prone.

So how it can be done better? Maybe it could be better when we include the compile phase ( ng build --prod ) into the Docker build? That sounds promising, let’s do it!

To achieve it I’d like to introduce something that’s called Multi-stage Docker build.

It was introduced in Docker 17.05 and it’s main goal was to create smaller containers without loosing the readability of a Dockerfile. With this approach we can divide building a Docker image into smaller phases (stages) where result of previous one (or part of it) can be used in another.

To put it into our context, we’ll divide our Docker build into two stages:

Only compiled output from first stage will be moved to the second so small size of the container will be preserved.

Until this point we’ve done the second step, so let’s focus on a first one.

For compiling the source code we’ll go with different Docker image as a base, which is that containing Node.js. The part of Dockerfile that covers building stage is:

In this case there are more lines which are responsible for:

To make building our Docker image even more efficient we can add to the project’s root additional file called .dockerignore . This one works similar to .gitignore and in it we can define what files and folders we want to Docker to ignore. In our case we don’t want to copy any files from node_modules and dist folders, because they’re not needed in compilation.

Alright so let’s combine both Docker stages into one and as a result we’ll get:

The only adjustment that I made here is that I’ve added comments before each stage and also I’ve added --from=build flag to tell Docker that it needs to copy compiled files from build stage (also the source path have changed, because files are located in a different folder).

Going back to a terminal, first you need to create a Docker image:

And then run the app (on a different port):

If you want to check this project go to its repository on GitHub:

Aston Villa Dashboard made in Angular 7

How I Got Over Imposter Syndrome While Working at Meta