Kubernetes is popularly known as K8s is a production-grade open-source container orchestration tool developed by Google to help you manage the containerized/dockerized applications supporting multiple deployment environments like On-premise, cloud, or virtual machines.

Why is it popular and powerful ?

Kubernetes can speed up the development process by making easy, automated deployments, updates (rolling-update) and by managing our apps and services with almost zero downtime. It also provides self-healing. Kubernetes can detect and restart services when a process crashes inside the container.Its is highly performant,scalable and provides reliable infrastructure to support data recovery with ease. 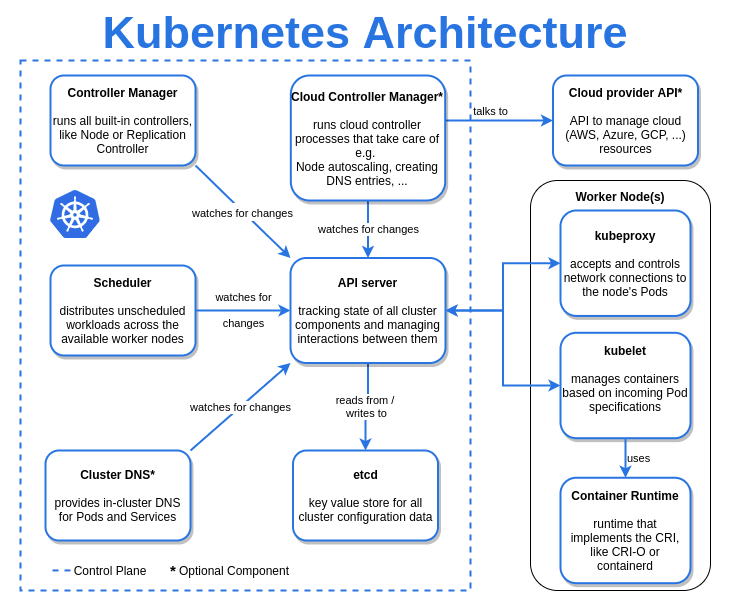 The most basic architecture of k8s has two major Nodes.

The master node is also known as a control plane that is responsible to manage worker nodes efficiently. User enters commands and configuration files from control plane. It controls all cluster.

A pod is a smallest and simplest unit that you create or deploy in k8s, which is an abstraction of the container application.A single pod has usually one, or multiple containers, and their shared resources.

Deployments are best used for stateless applications. Pods managed by deployment workload are treated as independent and disposable.

If a pod encounters disruption, Kubernetes removes it and then recreates it.

Daemonsets ensures that every node in the cluster runs a copy of the pod.

For use cases where you're collecting logs or monitoring node performance, this daemon-like workload works best.

A ReplicaSet's purpose is to run a specified number of pods at any given time.

Like a Deployment , a StatefulSet manages Pods, are best used when your application needs to maintain its identity and store data.

Jobs launch one or more pods and ensure that a specified number of them successfully terminate.

Jobs are best used to run a finite task to completion as opposed to managing an ongoing desired application state.

CronJobs are similar to jobs. CronJobs, however, runs to completion on a cron-based schedule.

An abstract way to expose an application running on a set of Pods as a network service.
With Kubernetes you don't need to modify your application to use an unfamiliar service discovery mechanism. Kubernetes gives Pods their own IP addresses and a single DNS name for a set of Pods, and can load-balance across them. 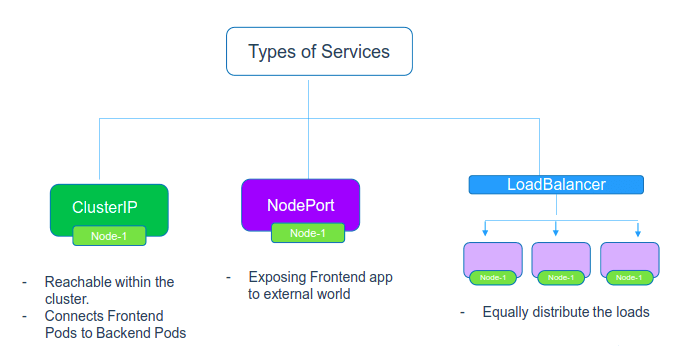 Ingress exposes HTTP and HTTPS routes from outside the cluster to services within the cluster. Traffic routing is controlled by rules defined on the Ingress resource.

In order for the Ingress resource to work, the cluster must have an ingress controller running.

A Secret is an object that contains a small amount of sensitive data such as a password, a token, or a key. Such information might otherwise be put in a Pod specification or in a container image. Using a Secret means that you don't need to include confidential data in your application code.

A ConfigMap is an API object used to store non-confidential data in key-value pairs. Pods can consume ConfigMaps as environment variables, command-line arguments, or as configuration files in a volume.

A ConfigMap separates your configurations from your Pod and components, which helps keep your workloads portable. This makes their configurations easier to change and manage, and prevents hardcoding configuration data to Pod specifications.

As we know data stored in container is ephermal. So we need persistant volume to preserve data across container restart.

A PersistentVolume (PV) is a piece of storage in the cluster that has been provisioned by an administrator or dynamically provisioned using Storage Classes.

Some advanced topics you can explore which helps you become better kubernetes adminstrator.

These are some basic topics which help you getting started in kubernetes. In order to get hands-on in kubernetes, You can easily set up Minikube or Amazon EKS cluster using eksctl.

Once suspended, vinothmohan will not be able to comment or publish posts until their suspension is removed.

Once unsuspended, vinothmohan will be able to comment and publish posts again.

Once unpublished, all posts by vinothmohan will become hidden and only accessible to themselves.

If vinothmohan is not suspended, they can still re-publish their posts from their dashboard.

Once unpublished, this post will become invisible to the public and only accessible to Vinoth Mohan.

Thanks for keeping DEV Community safe. Here is what you can do to flag vinothmohan:

Unflagging vinothmohan will restore default visibility to their posts.