Docker allows you to decouple the application/software from the underlying infrastructure into standardized units called containers that have everything the software needs to run including libraries, system tools, code, and runtime. 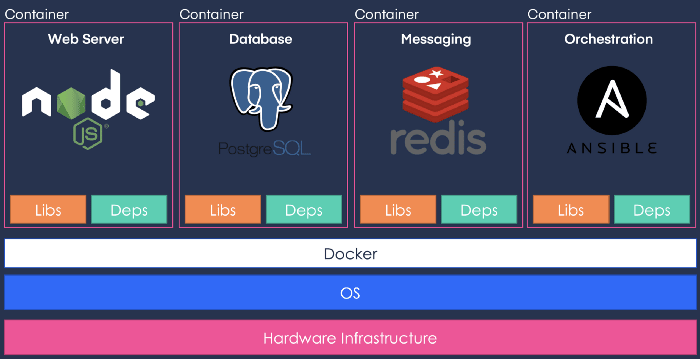 Virtualization is the process of creating virtual enviroment or virtual machine by spliting one system into many different sections which act like separate, distinct individual systems. A software called Hypervisor makes this kind of splitting possible.

Containerization is a form of virtualization through which applications are run in containers (isolated user spaces) all using a shared OS. It packs or encapsulates software code and all its dependencies for it to run in a consistent and uniform manner on any infrastructure.

Virtual Machines (VMs) virtualize the underlying hardware. They run on physical hardware via an intermediation layer known as a hypervisor. They require additional resources are required to scale-up VMs.

They are more suitable for monolithic applications. Whereas, Docker is operating system level virtualization. Docker containers userspace on top the of host kernel, making them lightweight and fast. Up-scaling is simpler, just need to create another container from an image.

A hypervisor is a software that makes virtualization possible. It is also called Virtual Machine Monitor. It divides the host system and allocates the resources to each divided virtual environment.

What are Docker Images?

A Docker image is an executable file, that creates a Docker container. An image is built from the executable version of an application together with its dependencies and configurations. Running instance of an image is a container.

Docker image includes system libraries, tools, and other files and dependencies for the application. An image is made up of multiple layers.

What is Docker Hub?

Docker images create docker containers. There has to be a registry where these docker images live. This registry is Docker Hub. Users can pick up images from Docker Hub and use them to create customized images and containers. Currently, the Docker Hub is the world’s largest public repository of image containers.

The four major components of Docker are daemon, Client, Host, and Registry

What is Docker Engine?

Docker daemon or Docker engine represents the server. The docker daemon and the clients should be run on the same or remote host, which can communicate through command-line client binary and full RESTful API.

What is Docker Image Registry?

Dockerfile is a text file that has instructions to build a Docker image. All commands in dockerfile could also be used from the command line to build images.

Each instruction in a dockerfile creates one read-only layer: 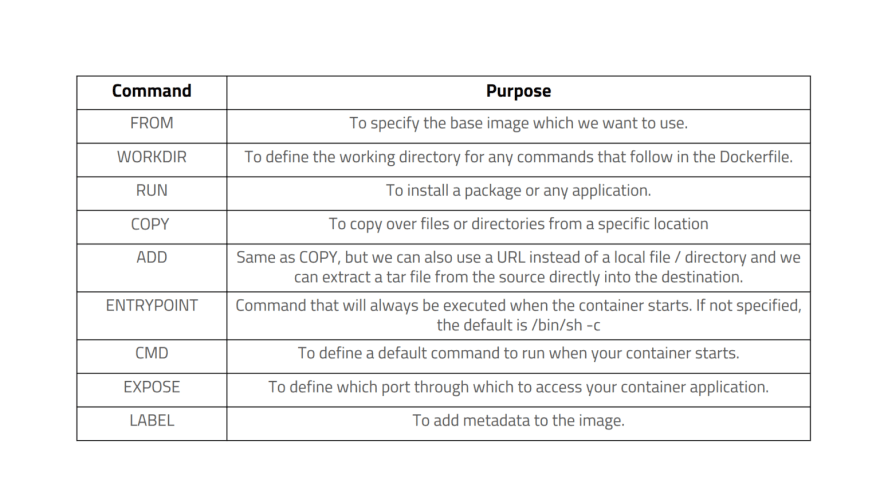 This command pulls an image from a docker public registry.

This command builds an image according to Dockerfile.

This command runs an container of an image. 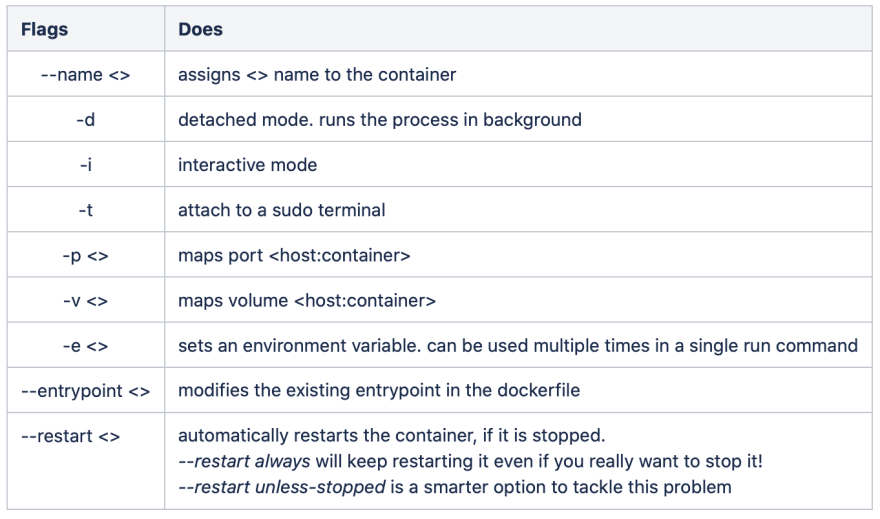 This command lists the docker containers.

This command stops a running container(s).

This command removes a stopped container(s).

This command lists the docker images.

This command attaches the terminal to a container running in the background (detached mode).

This command returns details of the container in a JSON format.

This command returns logs of the container running in the background (detached mode).

This command pushes an image to your account on a docker public registry (dockerhub).

Following command creates the docker container with the required images.

Processes running inside the container is paused. Following command helps us to achieve this.

Container can’t be removed if in a paused state.

Unpause moves the container back to run the state. Below command helps us to do this.

Container with all its processes is stopped with below command.

To stop all the running Docker containers use the below command

Container along with its processes are restarted

A container can be killed with below command

The entire container is discarded. It is preferred to do this when the container is in a stopped state rather than do it forcefully. 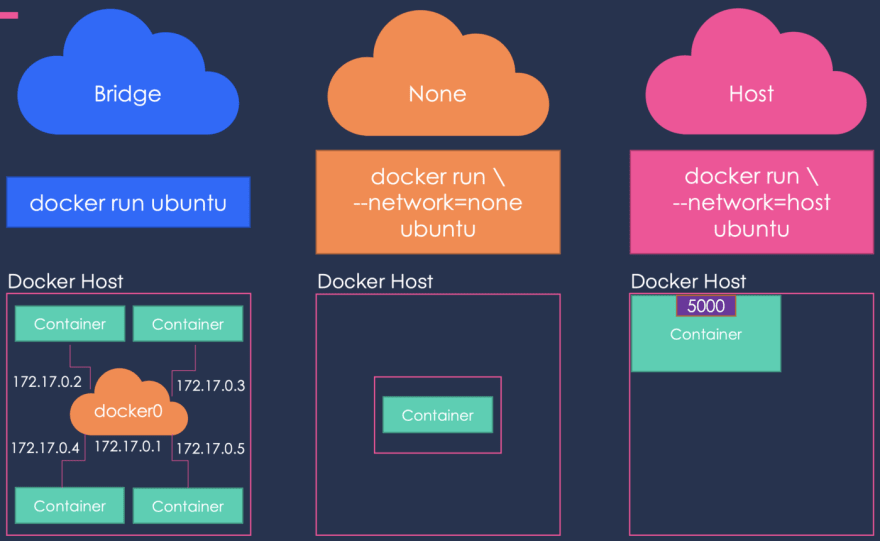 The None network keeps the container in complete isolation, i.e. they are not connected to any network or container.

Types of Volume mounts in Docker.

There are three mount types available in Docker

Volume mounts are the best way to persist data in Docker. Data are stored in a part of the host filesystem which is managed by Docker containers. (/var/lib/docker/volumes/ on Linux)

-v or --volume flag and --mount flag could be used for docker swarm services and standalone containers.

To create a docker volume. For eg:

If we need to start a container with “my-vol”

Docker Compose is a tool provided by Docker for defining and running multi-container applications together in an isolated environment. Either a YAML or JSON file can be used to configure all the required services like Database, Messaging Queue along with the application server. Then, with a single command, we can create and start all the services from the configuration file.

It comes handy to reproduce the entire application along with its services in various environments like development, testing, staging and most importantly in CI as well.

Typically the configuration file is named as docker-compose.yml. Below is a sample file: 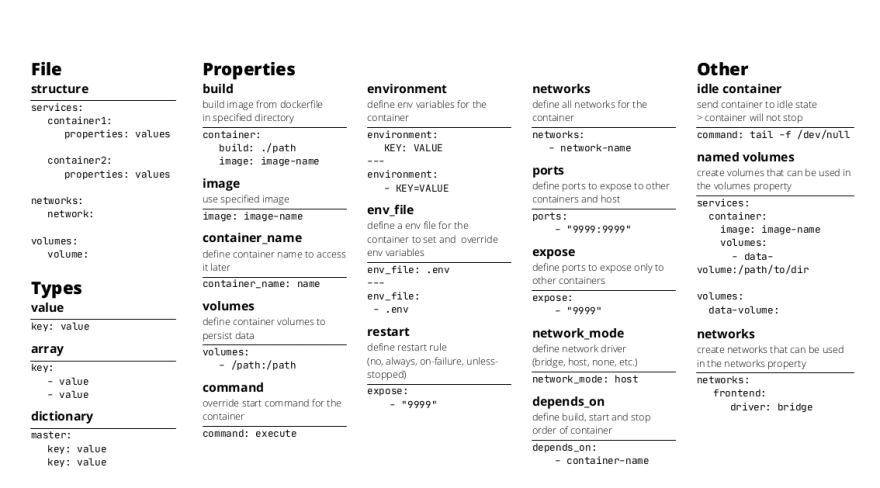 Why we enjoyed using Plasmic to design a marketing homepage

Once suspended, vinothmohan will not be able to comment or publish posts until their suspension is removed.

Once unsuspended, vinothmohan will be able to comment and publish posts again.

Once unpublished, all posts by vinothmohan will become hidden and only accessible to themselves.

If vinothmohan is not suspended, they can still re-publish their posts from their dashboard.

Once unpublished, this post will become invisible to the public and only accessible to Vinoth Mohan.

Thanks for keeping DEV Community safe. Here is what you can do to flag vinothmohan:

Unflagging vinothmohan will restore default visibility to their posts.