My project is to create an SVG-based backdrop in the style of a cutting mat for software engineers (well me, not really anyone else, apologies for being selfish).

As covered in the previous posts, I have a grid drawn in grey (#777) on top of a background colour (#191662) of Engineer's blue. There is also a by-line, a reference to creative-commons licencing and, in the latest update, a rendering of some common screen resolutions.

In this penultimate post I will be adding some additional radial lines aligned to the following Aesthetic Ratios.

The effect of the Golden and Silver ratios on art and architecture are well documented but the other ratios might not be quite so familiar.

Given a unit right-angle triangle with two sides of length 1, the longest side (known as the hypotenuse) will have a length of 1.414 as calculated by the formula sqrt(2).

I will release the cutting-mat SVG image at the end of each stage via my GitHub repo.

All four ratios will be plotted as a line radiating from the bottom-left corner (coordinate x:0, y:800). The end point of each ratio will be calculated by multiplying the height of the grid (which is 800px) by the ratio and deducting it from the origin as follows. 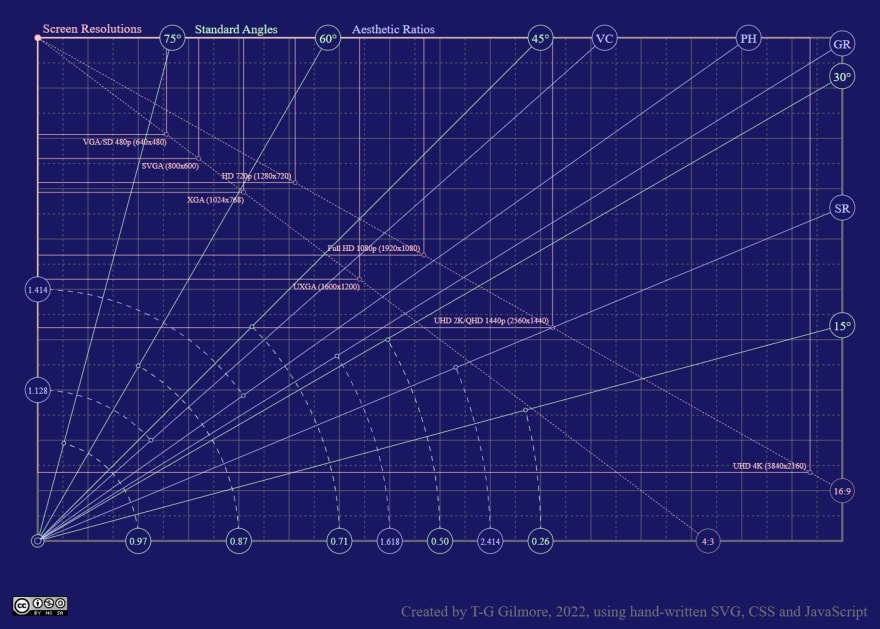 As with the Standard angles in the previous post, there are arcs connecting the line with the edge but in place of the Sine of the angle being shown I have presented the value of each aesthetic ratio.

As promised at the beginning of this post, I will now explain my thinking behind the ratio I call the "Vitruvian Coefficient". It is based on Leonardo da Vinci's diagram called The Vitruvian Man where there are two representations of a man, one overlaying the other with arms and legs stretched out. Both figured are enclosed within a square and a circle with each figure touching one or the other. 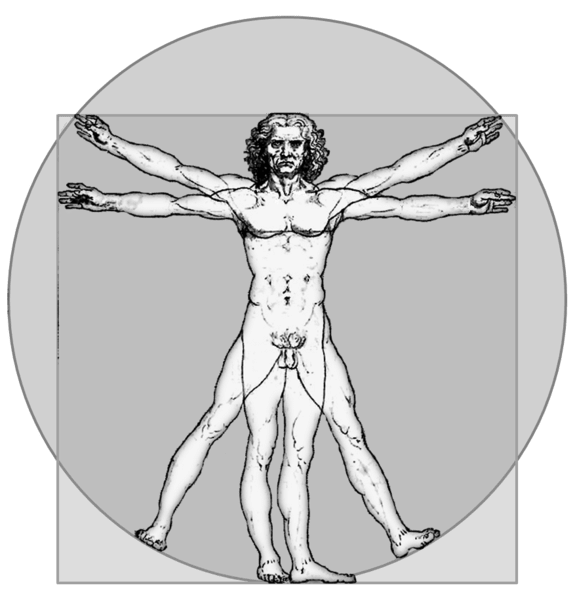 When I first saw the diagram as a child it raised a question in me that for which I have only relatively recently calculated an answer.

My query is, given a square and a circle of the same area, is there a relationship between their:

If the area (A) of both shapes is 120m the dimensions of the square are:

The dimensions of the circle are:

But the real surprise for me came when I went on to compare the outsides and the widths.

So what use is VC?

For a square and circle of the same area,
VC = Perimeter / Circumference = Diameter / Side = 2/SQRT(PI)

Not Earth-shattering I know but I found it interesting and it could be useful.

In the next and final post in this series I will be adding a couple of diagrams. One illustrating the VC as described above, the other presenting an Egyptian Triangle.

Introducing $createdAt And $updatedAt On Each Resource

Once suspended, tracygjg will not be able to comment or publish posts until their suspension is removed.

Once unsuspended, tracygjg will be able to comment and publish posts again.

Once unpublished, all posts by tracygjg will become hidden and only accessible to themselves.

If tracygjg is not suspended, they can still re-publish their posts from their dashboard.