Part 4 of Algorithms explained! Every few weeks I write about an algorithm and explain and implement it!
Is there an algorithm you always wanted to know about? Leave a comment!

I once took an online class on machine learning by the amazing Andrew Ng from Stanford for my bachelors studies. One of the first ML algorithms I ever had the chance to look at, was linear regression.

In this post I'll explain how linear regression works and implement it in PHP!

So what does linear regression actually do?

In one sentence: It creates a linear function that represents the trend of something. The go-to example is usually house prices compared to their size. The larger a house, the more expensive it is. Sounds reasonable, right? You would put a known house size, for example in square meters, into the function and you would get an estimated price out of it.

Let's have a look at this data set: 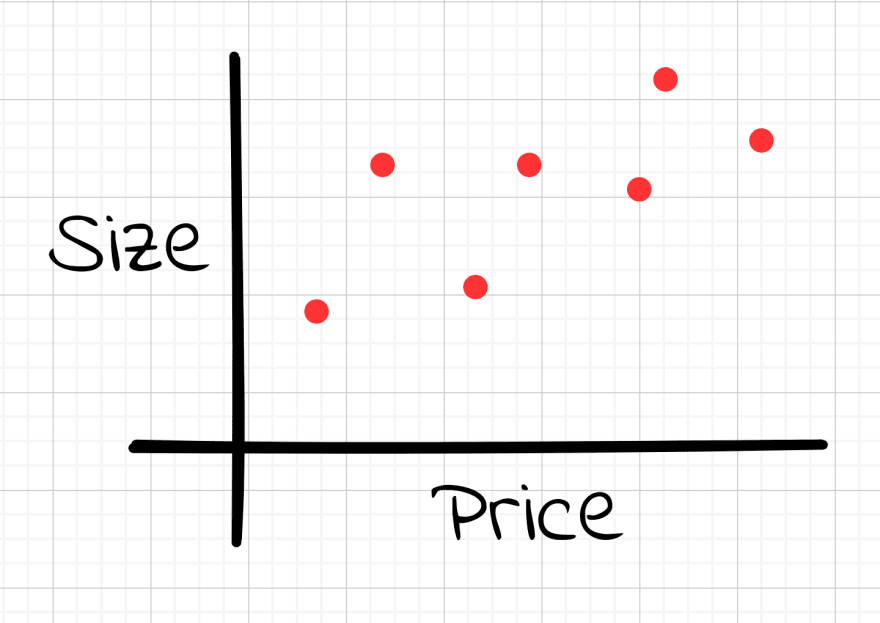 On first glance, the data seems to correlate. The larger the house, the more expensive it is. The data is a bit scattered, but there's an overall trend visible: 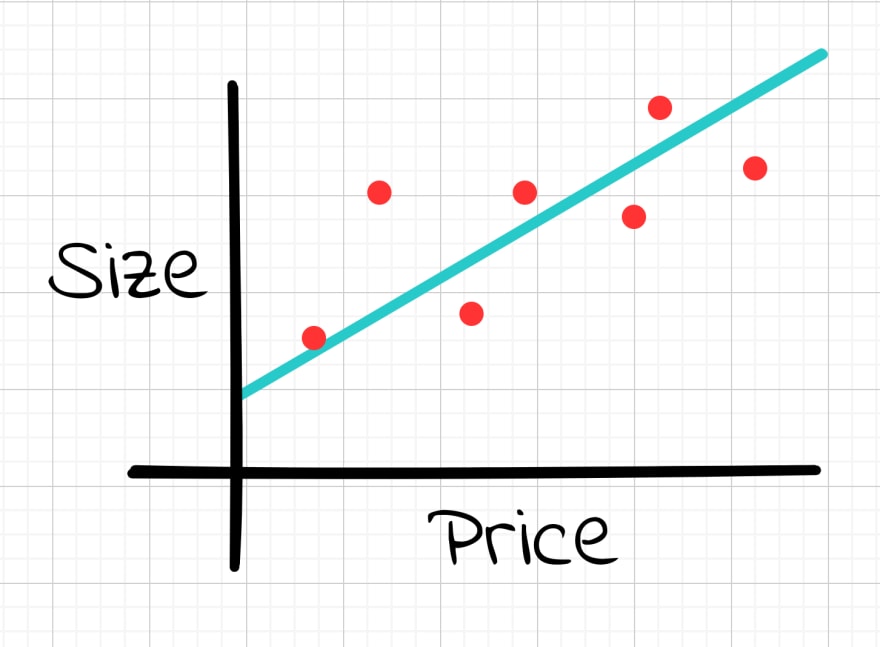 (This is an approximation)

Of course there's usually more factors to the price of a house in real life: Is there a grocery store nearby, is it modern, was it once considered haunted, what's the size of its backyard? These factors make up the variation in the data - it's not linear.

Let me illustrate with the above example: 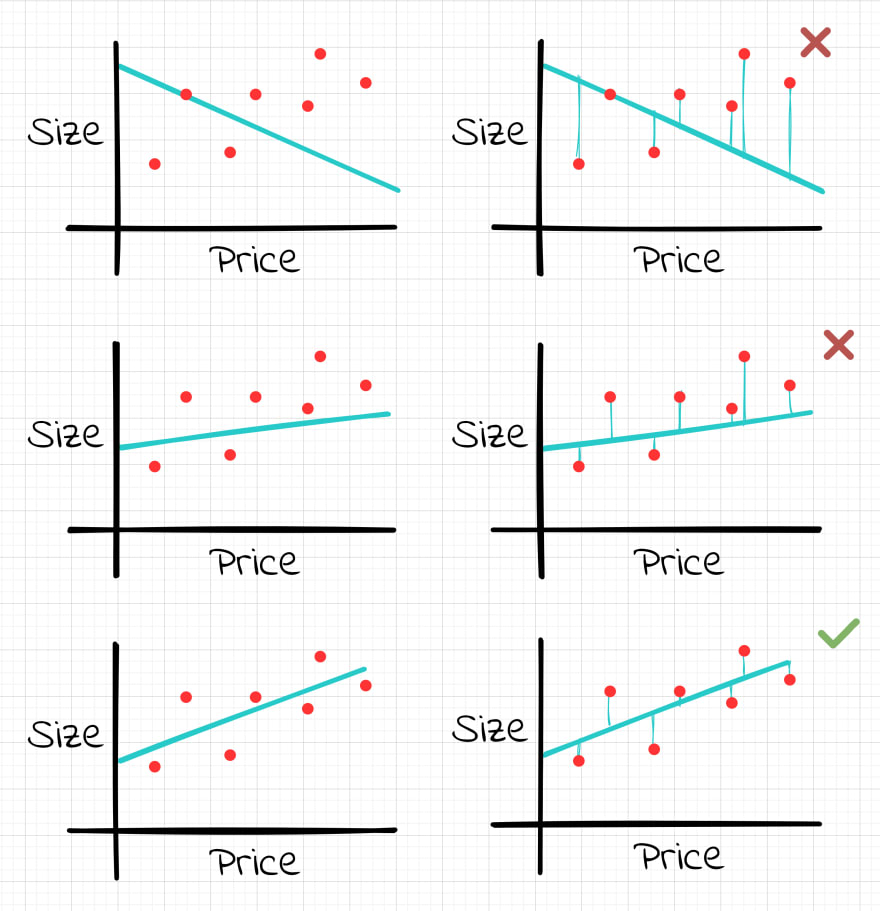 (Again, this is an approximation)

So, to implement the algorithm, we need three different pieces:

The definition of a linear function

A linear function f(x) usually comes in the form of:

Whereas a basically defines the slope of the function and b moves it along the Y axis.

We can make a more general definition of a linear function by introducing a variable called x0​ into the function and renaming a and b to c0​ and c0​ ("c" stands for "coefficient"):

In PHP, this is pretty straight forward:

We can randomly define $c0 and $c1 to get a first starting point:

So far, so good. Let's generate some data next!

For illustration purposes, I'll be going to work with this data set and predefined values for $c0 and $c1:

To graph a few things, I'll use Desmos, which is an amazing tool to fiddle around with maths. On a graph, the data looks like this: 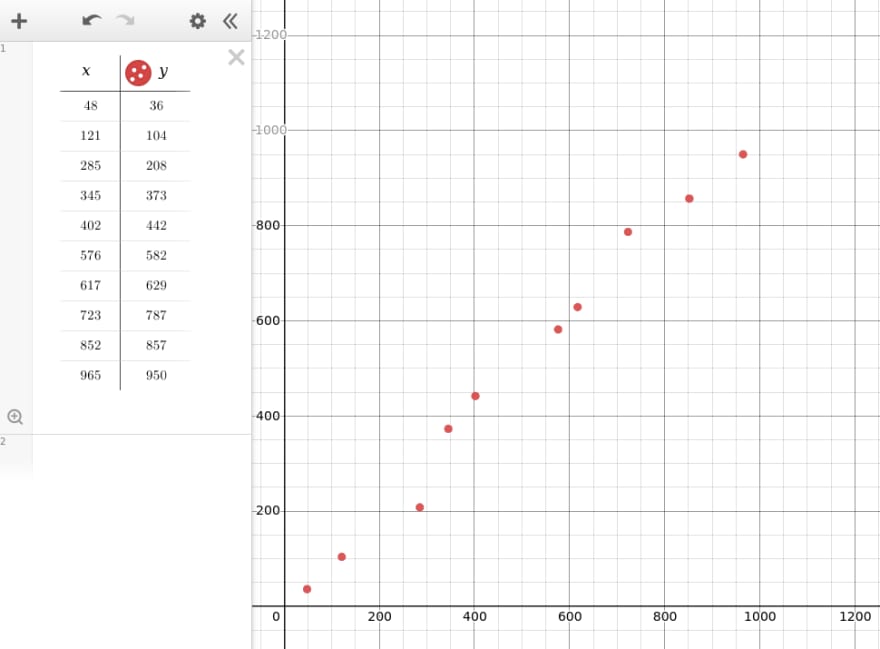 We can see a clear trend there. The trend line will likely be going from bottom left to top right.

With the data at hand, we can start to...

So, to get a good estimate of how far off the linear function is, we calculate the average squared distance of the function's output Y and the actual Y. Squared, because otherwise negative numbers might emerge, which is something we don't want.

For this, we'll define yet another function that looks like this:

This formula sums up the squares (because otherwise there's negative numbers) of the differences between predicted Y of the trend line and actual Y for every data point. It then divides it by the total number of data points, resulting in an average.

Ok, but 73679488.2 is quite the number. Let's see what this would look like by adding the linear function to the graph: 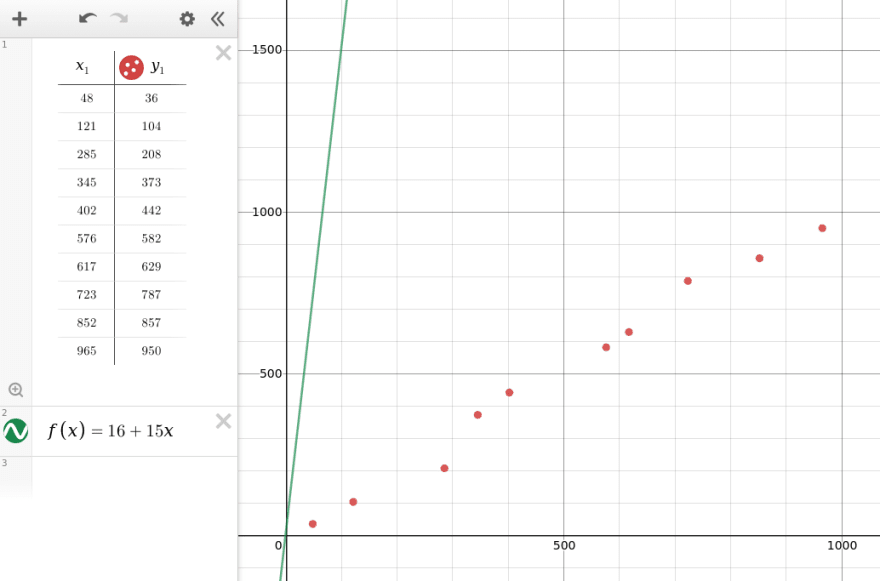 Yup, that's pretty far off. The Y-value for each point is far off to the top, accounting for this very large error. But that was the random definition. When can start improving from here.

To improve the trend line's fit to the data, we'll use "gradient descent". According to Wikipedia, gradient descent is "a first-order iterative optimization algorithm for finding a local minimum of a differentiable function." And that pretty much sums it up.

The "differentiable function" is, in the case of linear regression, the error function. So gradient descent basically tries to find the local minimum of the error function (thus maximizing the fit of the original linear function to the data). To achieve this, it can adjust two things.

Since X is always given (it's the data, we can't change that), gradient descent can adjust c0​ and c1​ .

Gradient descent decides on a level of adjustment by looking at the error function's steepness. Again, Wikipedia has a good analogy on this: Imagine being stuck in the mountains. It's very foggy and you need to get to a valley to escape. All you can rely on is local information (stuff that is visible around you). Using gradient descent, you would go in the steepest direction downwards, eventually reaching a minimum - a valley. The larger the steep, the larger the step you would take.

Let me illustrate in 2D: 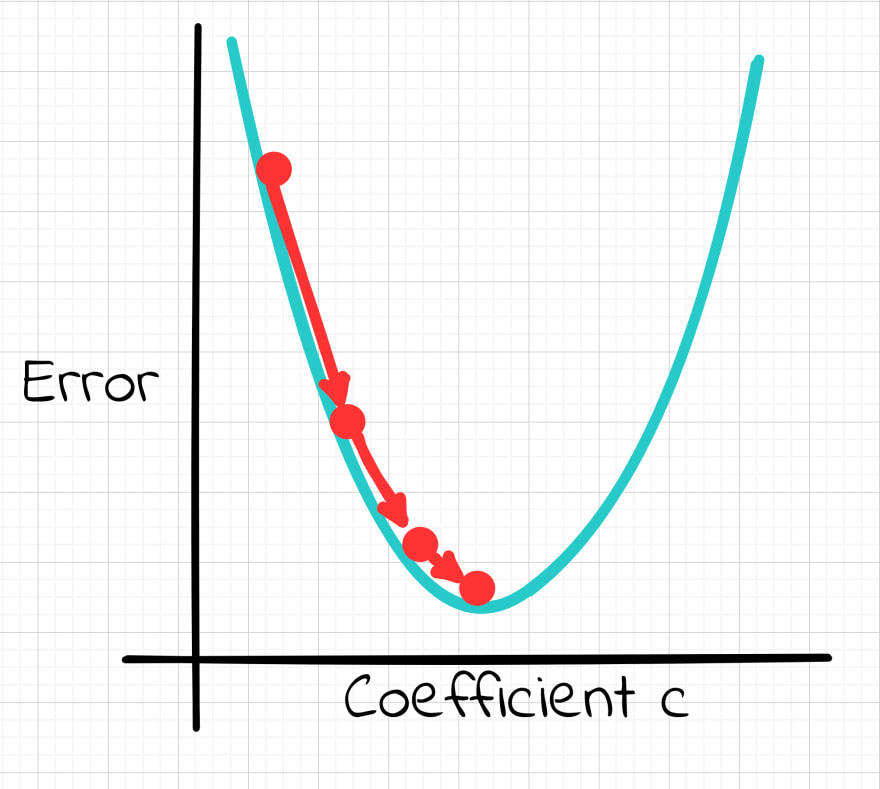 The red dots on the graph show the value for C for each iteration of gradient descent. The arrows indicate in which direction the algorithm would alter C in order to find a smaller error.

To get to the amount of change for each value of c0​ and c1​ , we can do partial derivatives with respect to c0​ and c1​ (i.e. what's the steepness of the function for one variable, while the other is held constant?). I won't go too deep into the calculus here. We would end up with this formula:

We can implement this more or less the same way we implemented the error function:

This gives us the descent that needs to be applied to cm​ in order to bring the linear function closer to the data. Now we can...

This is rather straight forward: We calculate the descents for c0​ and c1​ , apply some learning rate (to adjust the step size) and set the new values.

The gradient descent might try to take steps that are way too large to yield good results. Remember the analogy of being stuck on a mountain? Now imagine being 50 meters tall. The smallest step you could take would still be way too large, especially if the valley you want to get in is rather narrow. You wouldn't go into the valley, but end up on the opposite side of it. The next step you would take would be too large, too, so you end up, yet again, on the other side of the valley, eventually going even more uphill than downhill: 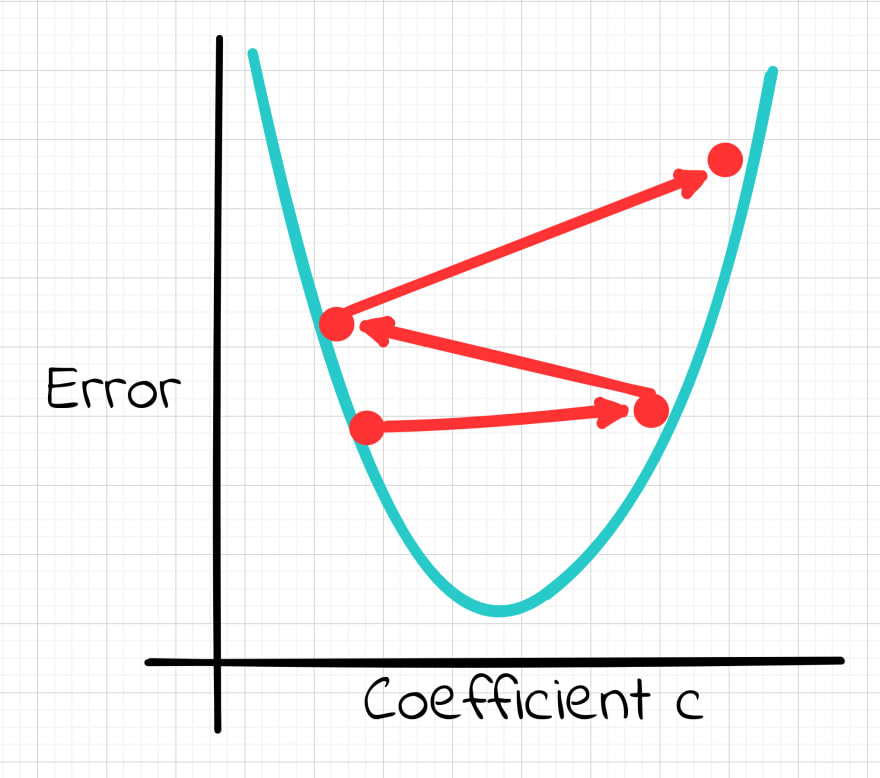 The learning rate acts as a counter measurement to this: It adjusts your size so your steps are small enough for you to step into the valley.

There's a sweet spot to every data set, but there's no "one fits all" learning rate. One could apply other ML algorithms to find the perfect learning rate, though, but for small examples, it's best to try a few values and settle for the one that gives the best results.

With this information, we can define two functions to calculate the adjusted values of c0​ and c1​ :

Almost there. Now we need a loop to adapt the values until a certain goal is reached. Let's just do 50 iterations and see where the values end up:

Ok, that seems to have worked. Let's see how good those values fit our data: 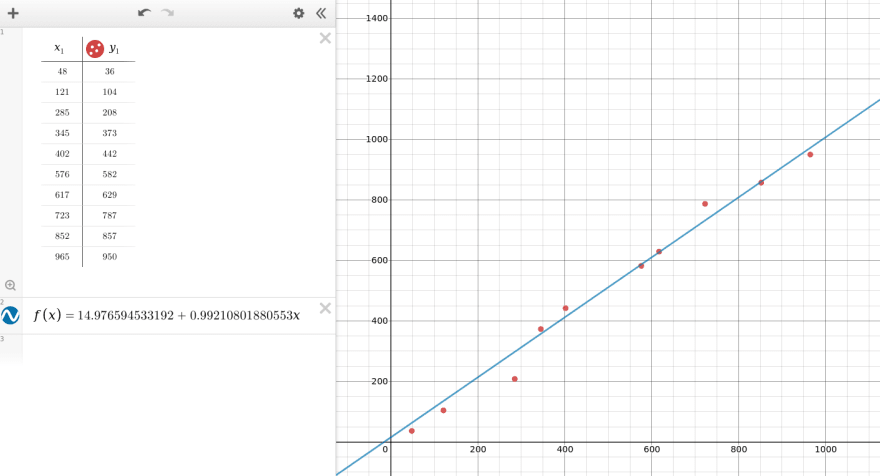 That's as good as it gets and actually pretty close! This function can now do rather accurate predictions for unknown values of x of the same data set. How did the error do, though?

We see that the error is large at first, but gets smaller really fast: Within around 5 iterations the error stabilizes at around 1429.28 - our implementation works!

Linear regression is applied mathematics. Just like most ML algorithms. Machine learning and AI may seem like utter magic at first, but once I started reading into the topic, I realized that the people applying it are basically working with the same tools everyone else does.

It's never the less amazing, that a mathematical model is able to recognize patterns. The more complex algorithms even find patterns a human being probably wouldn't, which serves as a great tool.

If you want to support my efforts, please consider buying me a coffee ☕ or follow me on Twitter 🐦!

NFT Marketplace Development: How to Launch an NFT Platform Like OpenSea/Rarible?

A comprehensive guide on how to design future-proof controllers: Part 1

How to make a pulse effect