A little while ago I finished my bachelor's thesis about audio text alignment and stumbled upon the Needleman-Wunsch algorithm. This algorithm, together with its cousin, the Smith-Waterman algorithm, are both used in bioinformatics, but can also be used in NLP. One example is the Levenshtein edit distance: It counts the number of necessary edits to one string to transform it into another.

In this post I will explain how the algorithm works in detail and do a practical example with PHP.

Before we implement the algorithm, we try to understand what it does. PHP has the Levenshtein algorithm already built in, so we can examine its behaviour with a single line of code:

That looks reasonable: Replace i with e, replace e with s, replace d with h - that's 3 edits in total. Adding or removing characters are single operations as well:

How does it behave if a character was moved around?

2 edits - moving is not counted separately, it will count this as two replacements.

So the Levenshtein algorithm counts the following things as edits:

With this information we can start to have a look at how the algorithm actually counts those.

We need two matrices to implement the algorithm: The score matrix and the trace-back matrix. The score matrix keeps track of the number of edits, the trace-back matrix shows the path of least edits. We don't actually need it to calculate the number of edits, but we'll keep it in diagrams for illustration purposes. There's a near infinite number of possible ways to transform one string into another, we want the one with the least edits.

But first we label a few things:

(For simplicity, I'll leave away the declareMatrix function from now on.)

Ok, so far, so good. Now, what do we do with these matrices? 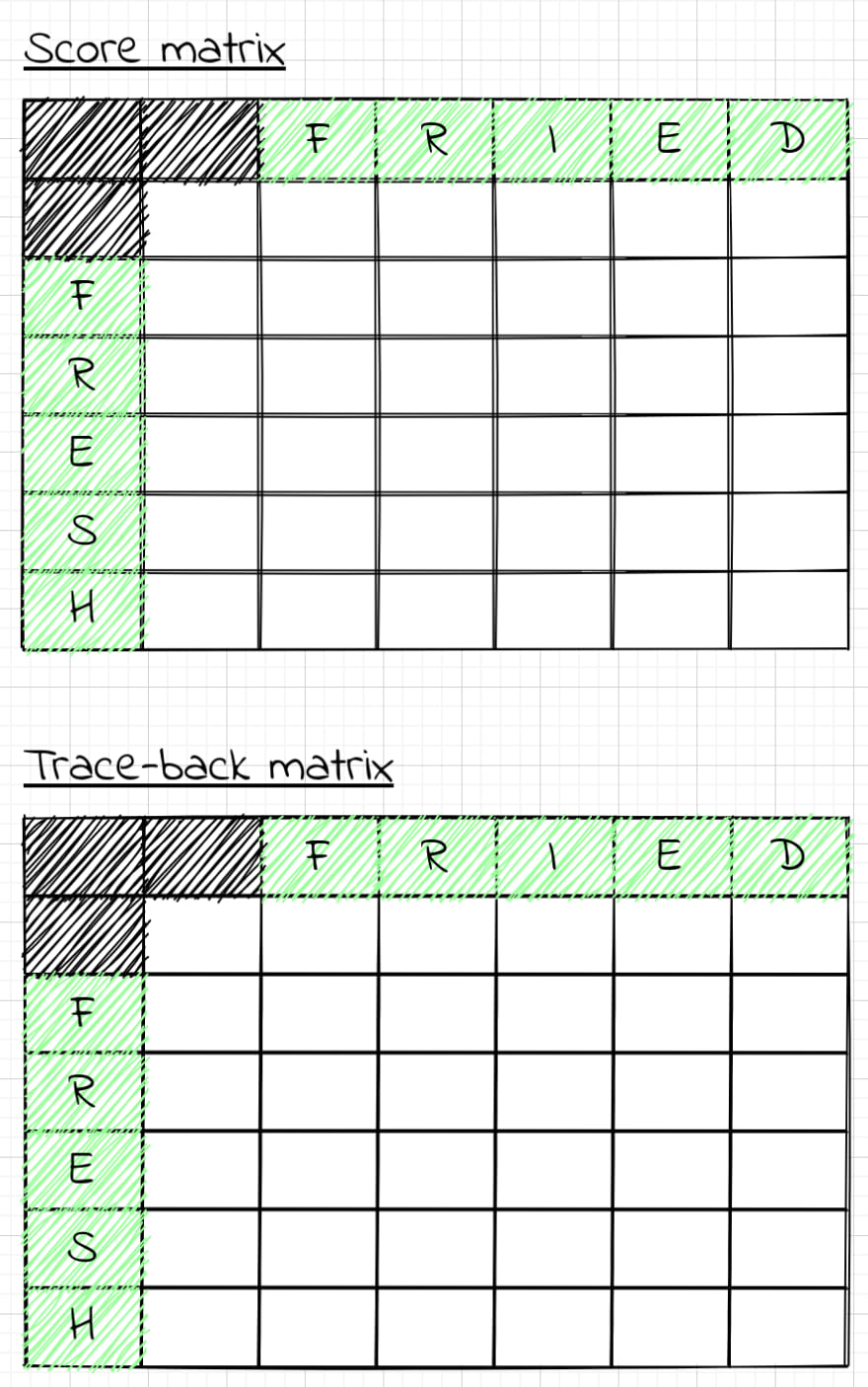 (The part we initialized is the empty 6x6 grid in the lower-right parts of the matrices. The words only function as labels in this illustration.)

We need to fill these with numbers somehow.

To calculate which of these values a cell holds, we take the following formula:

Ok, that's a mouthful. What does it actually do? The formula looks at the left, the top-left and the top neighbors of a given cell. Together with the rest of the score matrix and the trace-back matrix, the algorithm examines all possible ways to align the two strings: By leaving out, replacing or matching characters. The path of least edits is then calculated by creating a path (up, left, diagonal) and always taking the smallest amount of change.

If a character needs to be removed in $a, we add 1 to the score of the cell to the left and that's our new score. If we need to remove a character from $b, we do the same for the above cell.

If the characters match, we don't add anything and take the previous score (no edit necessary). The same goes for a mismatch: A mismatch means 1 edit (replace), so we take the score of the top-left neighbor and add 1 to it.

Taking the smallest resulting score (determined using min()) decides which operation to take. This guarantees that only the smallest number of edits is ever measured. No need to add (go left) and remove (go up) a character, if replacing it (go diagonal) works as well.

But we need to prefill some fields before we can start calculating. I'll use the trace-back matrix to show which operation the resulting score would mean: 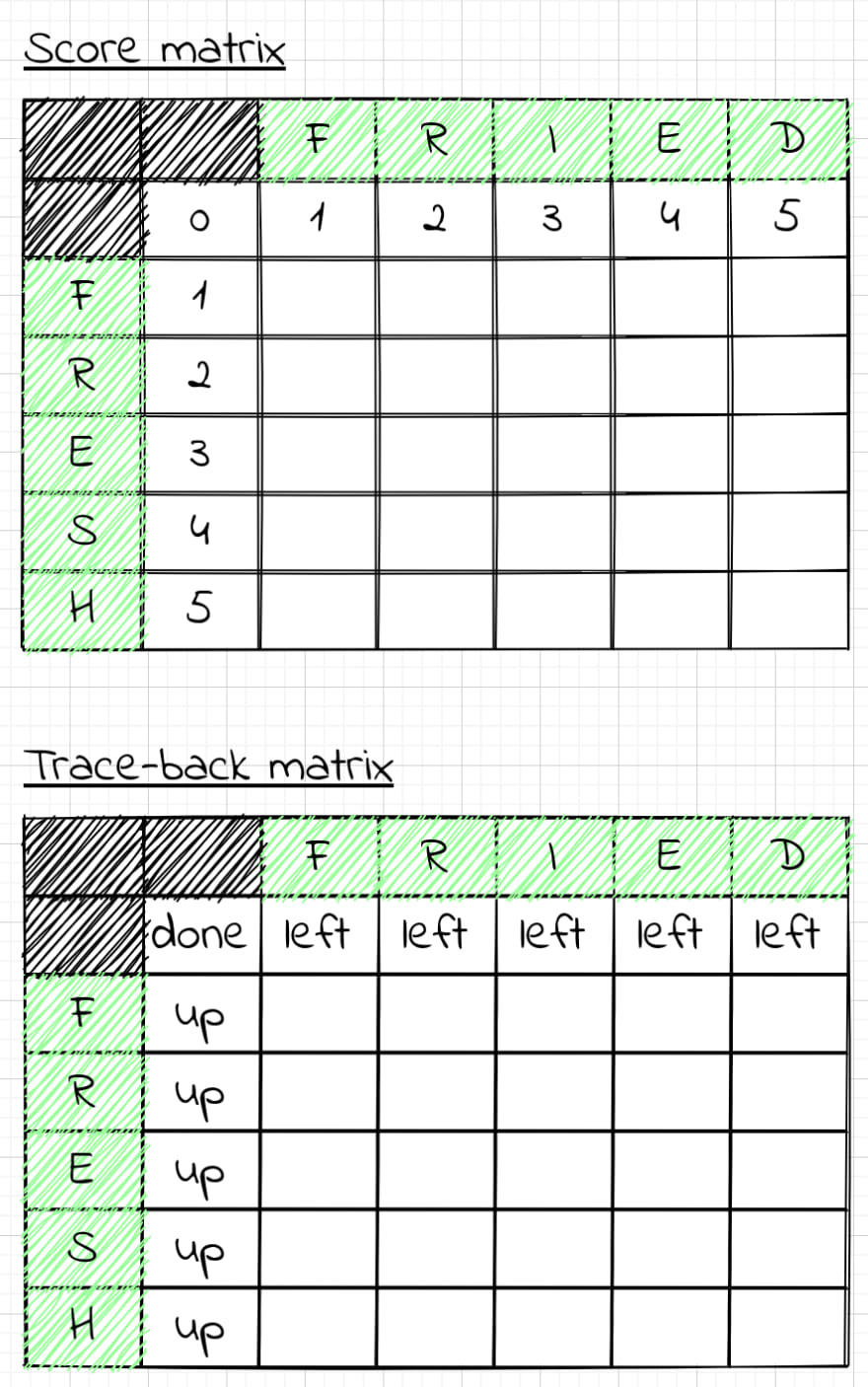 And off we go! We calculate the score for the first cell (F/F):

The formula detected a match: It doesn't add any edit. After looking at the first characters, the edit distance is therefore 0 (no edit necessary). Let's have a look at the next cell to the right (F of FRESH/R of FRIED):

Now the algorithm want's to remove a character! That makes no sense, why is that? The algorithm tries to find the amount of least edits necessary to transform one string into another. It might proof that removing a character at that place is actually the best option. It tries multiple different paths before ultimately settling for a single one. Let's have a look at the matrices with some more cells filled in: 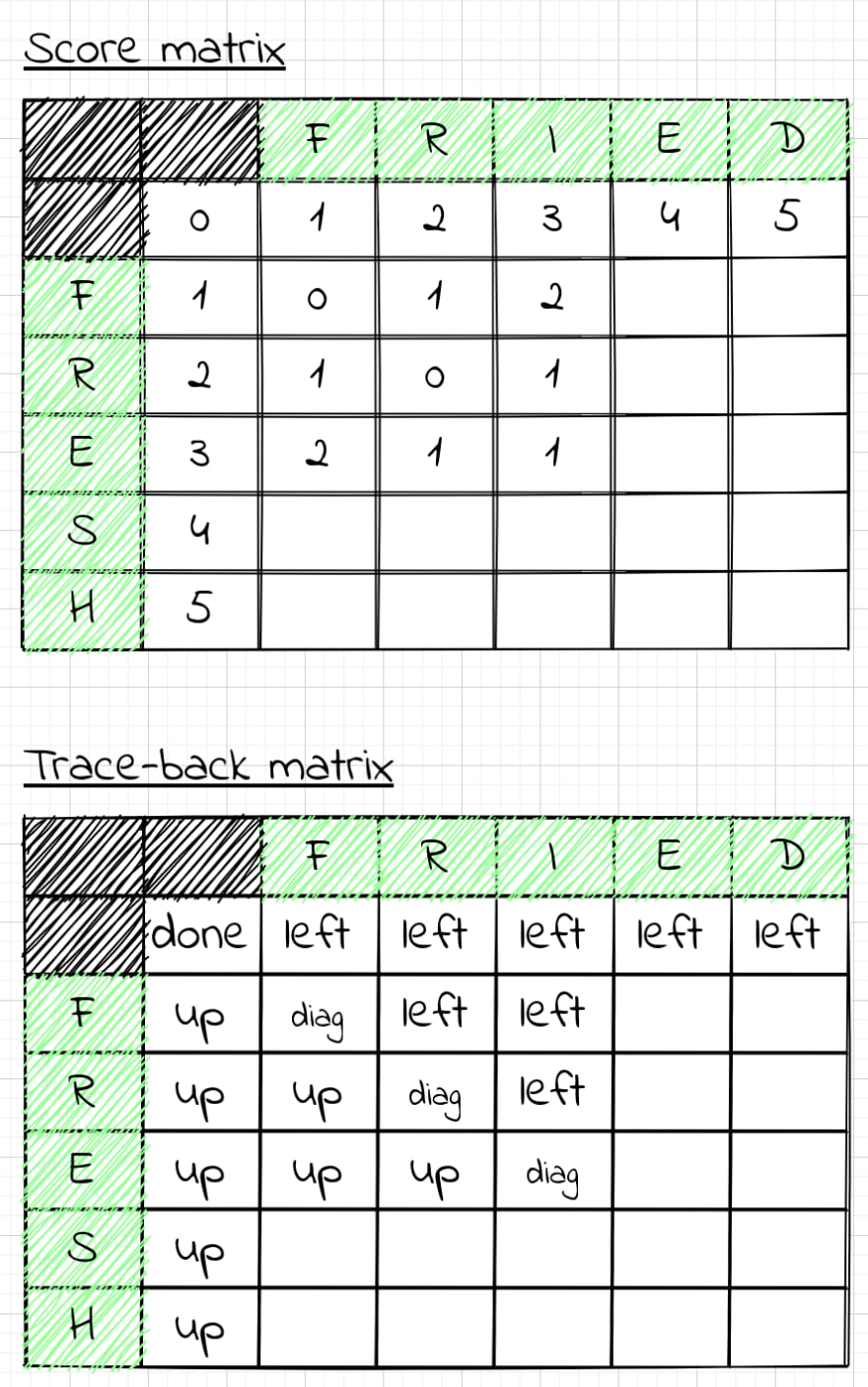 And here we start to see a pattern in the trace-back matrix: The "ups" and "lefts" seem to always lead to the diagonal. This is because matches and replacements are actually the path of least edits. This is what the matrices look like when they're filled in completely: 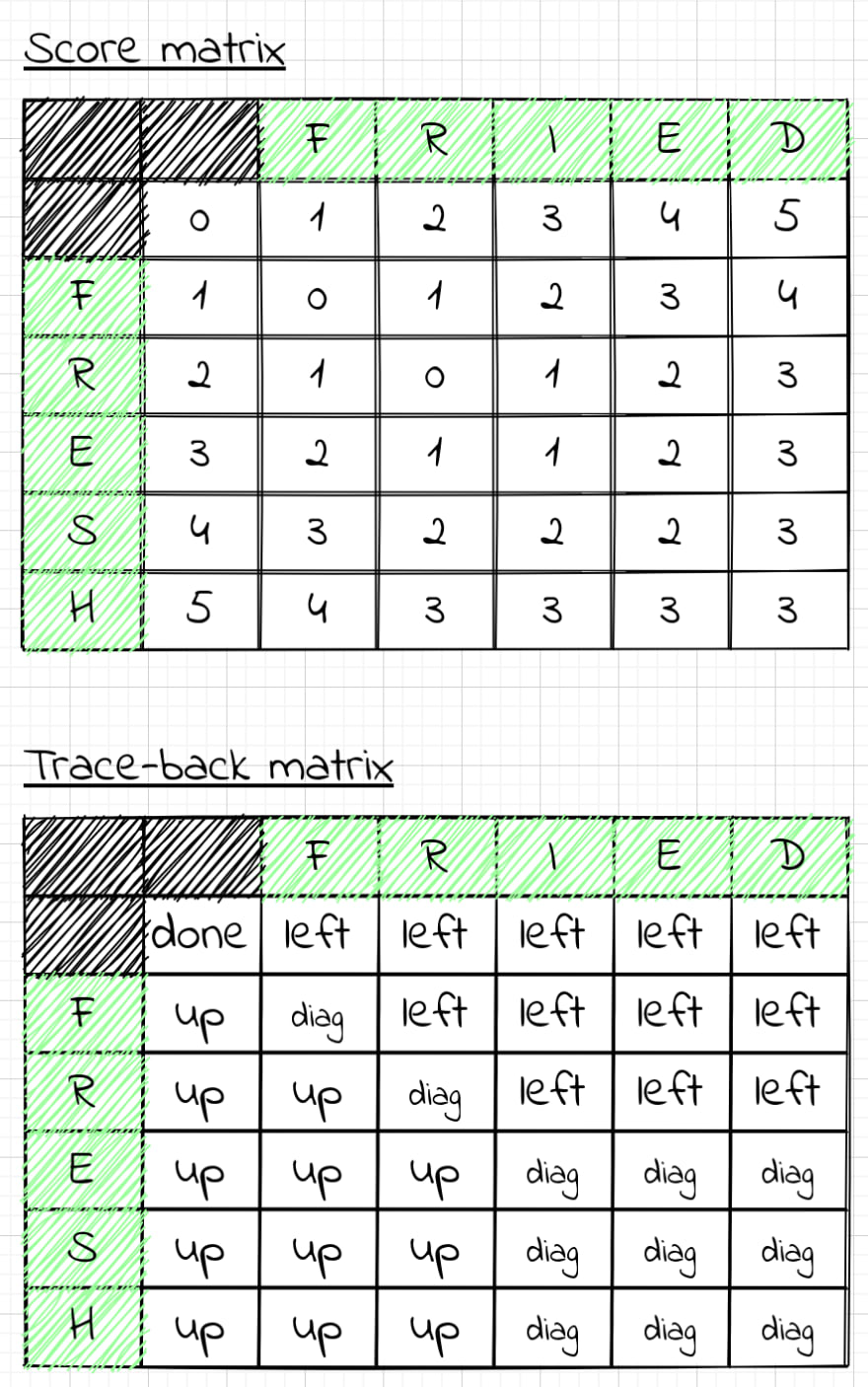 We see that the bottom-right corner of the trace-back matrix says "diag", which means, it chose the "replace" operation. When we follow the path until "done", we'll see that the algorithm only ever does matches and replaces, which is exactly what we would have guessed.

The Levenshtein distance can now be read out: The bottom-right corner of the score matrix says 3 - which is the smallest possible edit distance.

Let's try hell and hello to illustrate what would happen if a character should be removed: 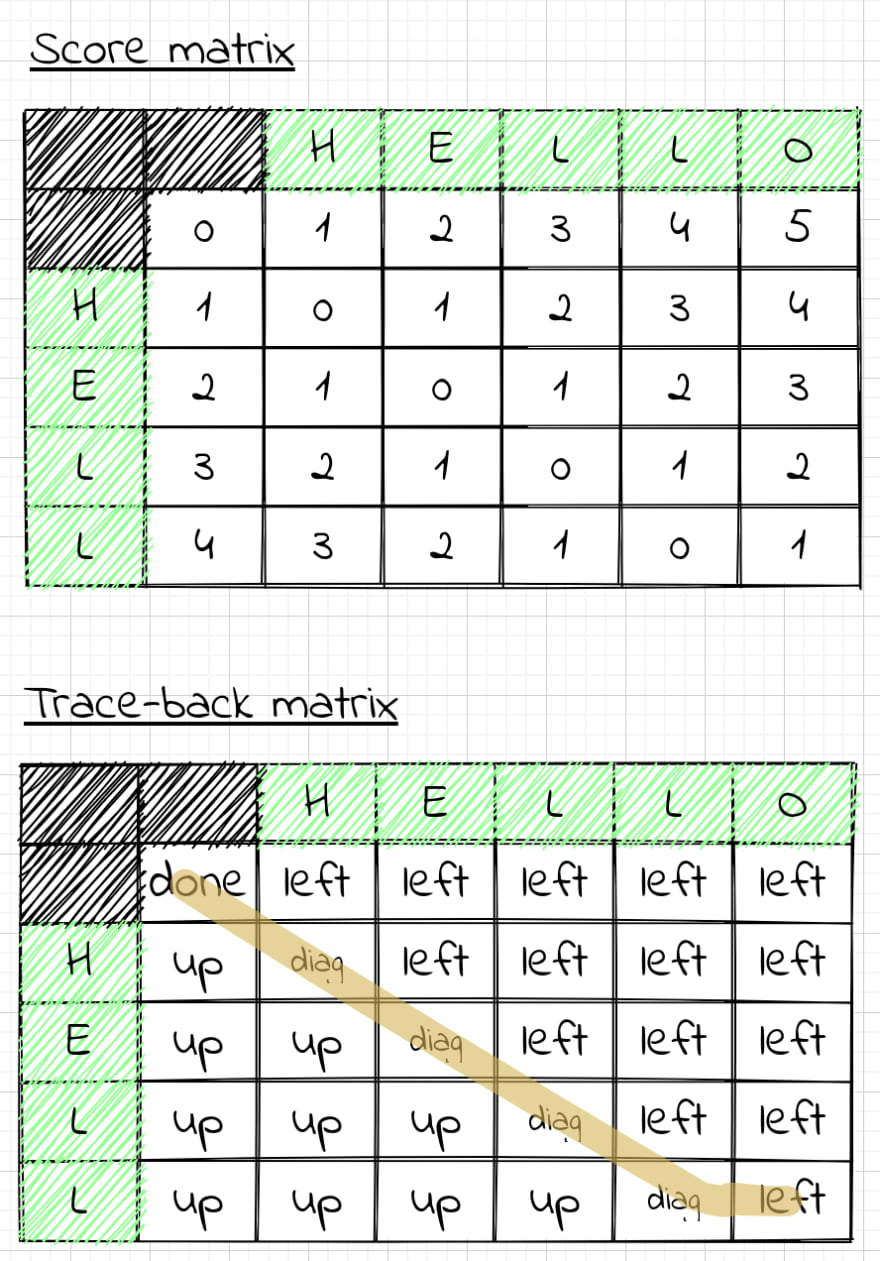 Indeed: The path on the trace-back matrix consists of 4 matches and one removing, resulting in an edit distance of 1. The score matrix says the same.

So in order to calculate the score for a given cell, we introduce a new function getScore:

As mentioned, we don't need the trace-back matrix in the implementation, so our final Levenshtein implementation looks like this:

Let's generate 1000 words and compare the Levenshtein distance our function calculates and the one calculated by the built-in function:

Seems to be working just like the built-in version! Here's a PHPSandbox with the code!

In most cases the Levenshtein algorithm will follow the diagonal path. It only ever adds or removes characters if the two string lengths are not equal. It's also quite costly at O(m*n)

The Levenshtein distance is a very handy tool. I think it's pretty clever to use an algorithm from bioinformatics for NLP!

How to implement charts in android using java

💡 Vue Typescript State Management : We can do better than “isLoading” in 2022

Get your GitHub 2021 year of contributions in 3D