This series explores how we can keep our code declarative as we adapt our features to progressively higher levels of complexity.

Let's say we need to capitalize the first letter of the displayed color names. 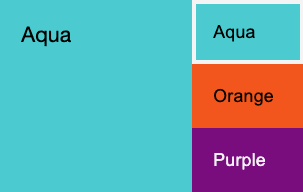 The button text is easy because it stays the same, but the text in #color-preview is dynamic. So now we have 2 pieces of state: aqua and Aqua, or currentColor and maybe currentColorName.

We want the template to make the most minimal change possible, and that would be currentColor. Then we want currentColorName to react to that change, just like our template was doing.

Angular pipes to the rescue, right? We could just have {{currentColor | titlecase}} in our template and be done already!

Actually, I probably would do this in this example, because titlecase comes from Angular's own CommonModule, so it requires no investment to use.

However, I stopped creating my own pipes a long time ago, for these reasons:

RxJS is the best choice for this level of complexity:

Now the declaration of currentColorName$ is all in once place!

It's easy to migrate the template with the async pipe. We can use the trick where we wrap everything in an ng-container and assign the output of async to a template variable:

(Also check out NgRx's ngrxLet directive! It's more performant and works when the value is 0, unlike ngIf.)

Now, let's take a step back and review what we've learned across the first 2 levels of complexity.

When it comes to syntactic dead ends, we want to avoid putting too much into templates, because that's the least flexible place to put logic.

When it comes to avoiding imperative code, this goal is still good: Every user event in the template pushes the most minimal change to a single place in our TypeScript, and then everything else reacts to that.

However, before we make this into a rule, notice in both the imperative vanilla JS and the imperative Angular code, a function was used as the container for the imperative code. Specifically, an event handler/callback with no return value. The templates offloaded their busy changes to the overly opinionated and powerful changeColor function.

So what if we avoided callback functions altogether? It turns out this is a better, more general rule.

Don't write callback functions, not even DOM event handlers. Even avoid Angular's lifecycle callbacks when possible. Basically, if you see something like this:

Ask yourself if the thing calling that method could just make a single tiny change instead, and have everything else react to that change automatically:

Does that sound crazy? Don't you need methods for flexibility to handle future complexity?

No. When have you ever added an extra line of code to a callback? When you wanted to write imperative code, that's when. So don't write callbacks in the first place. The curly braces of functions that don't return anything are like open arms inviting imperative code.

Even if you end up needing to call an imperative API, you don't have to change much syntax to add a tap(...) in your RxJS. But both tap and subscribe in RxJS are passed callback functions for imperative code, so still avoid those when you can.

Sometimes you have no choice but to write callback functions so you can call imperative APIs. Don't beat yourself up over it. However, also refer to Rule 3 later in this series.

The next article in this series will be Level 3: Complex Changes and Derived State

How Caching Data in Angular with Rxjs