Profiling a Python script with cProfile

As the name implies, profiling gives you a profile of a script. It evaluates items like time, call counts, and all kinds of statistics. So if you are trying to optimize a script runtime, or you are having a particular function that is taking too much time to process, you can profile the script to narrow down the issue.

It will print the output to the console:

Below are some of the arguments you can use for sorting. Full Docs

As you can see there's a wealth of information regarding your script execution performance. However, many people like to see things in a more visual manner.

First install qcachegrind with brew if you are on a mac. For linux, and windows you'll have to compile from source or find a compiled installer.

First we need to output the profiling results to a file:

Then we can open it in qcachegrind: 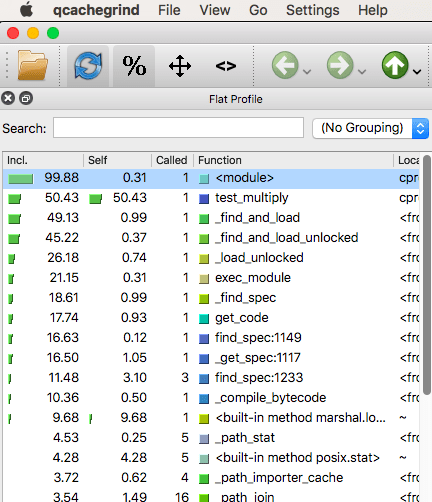 My small script doesn't do justice but I hope you get the idea of profiling with these awesome tools. I first used profiling, when doing a challenge in codewars that was not passing due to being so slow. After finding what was the bottleneck, I then step through that function, and figured out how to optimize it. Thank you for reading!

My goals for the next 8 weeks with HNG internship 8.0