When zooming a lot on 3D objects or when having small object lost in a very large scene, it can happen that your objects “jiggle” from one position to another, making rendering really shaky. We will see in this series of article where does it comes from and how to workaround it without using double precision everywhere.

Lets think in 2D. We have an X/Y coordinate system. When we specify the (x, y) coordinate of some point, we would like this point to be located at (x, y): 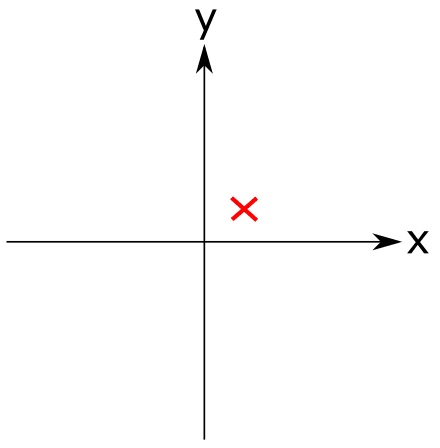 What we have using integer coordinate

What would happen if we were using integer coordinate system ? When locating a point in (1.5, 1.3), its position would be rounded to (1, 1). And if we move this point, it will jump from position to position: 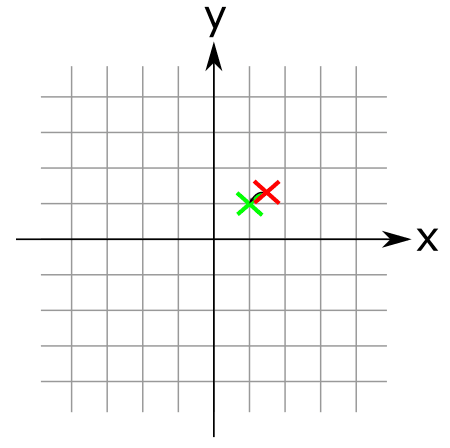 What we have using float coordinates

Floating points suffer from the same issue than integer values. Only a set of position are accessible, the difference is that, near to 0, a lot of position are possible. But the further away from zeros, the further the possible positions are. Instead of having regular grid of position like for integers, we have a logarithmic grid: 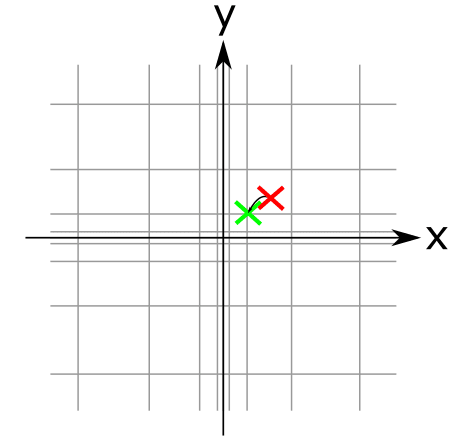 What does “large scene” means ?

I’m talking about “large scene”, but what does it means practically ? As a first approximation, you can consider your scene as large if you need more that 6 digit precision to locate your objects. I will detail why 6 digit later.

So a large scene does not depend on the absolute size of your scene but the ratio between your smallest object and the whole scene. A solar system can be consider as a small scene: Distance from Earth to the Sun is around 150 millions km, or 150.10e6 km. Meaning with 6 digit precision, assuming heliocentric coordinates, you can locate the earth position +/- 100km in space. If your goal is just to have an overview of the main planets in space, then this precision is enough. No one will notice earth is actually 100km to the left when looking at the whole system.

However, if you want to localize the International Space Station which orbit at ~400km altitude, and zooming on it, then 100km precision is not enough. You cannot just use heliocentric coordinates with single floating point precision. When animating your station, it will jump from one position to another.

Where does these “6 digits” comes from ?

Here is a few other example:

I think you get the point. Values are stored as M * 10^n, with M having a fixed size of 6 digits and n an exponent of size 2.

But what happen when using more than 6 digit precision ?

Now, lets go back to power of 2. As you know, computer use base 2 representation, not base 10. Number of base 2 digit they can store is defined by the IEEE 754 standard, which gives for 32bit floating point type:

Double precision are like single Float precision, except they use 11 bits for exponent and 52 bits for fraction, which can represent ~15 decimal digits precision instead of 6.

But using double precision has a cost regarding memory consumption, performances and legacy code refactoring effort.

I hope you better understand where does this problem comes from. I will develop in next articles the problem of floating precision when accumulating transformation matrices.

5 Best Games To Learn How To Code

Integration of Push kit in Unity based game

Once suspended, tandrieu will not be able to comment or publish posts until their suspension is removed.

Once unsuspended, tandrieu will be able to comment and publish posts again.

Once unpublished, all posts by tandrieu will become hidden and only accessible to themselves.

If tandrieu is not suspended, they can still re-publish their posts from their dashboard.

Once unpublished, this post will become invisible to the public and only accessible to Thibaut Andrieu.

Thanks for keeping DEV Community 👩‍💻👨‍💻 safe. Here is what you can do to flag tandrieu:

Unflagging tandrieu will restore default visibility to their posts.