I know sometimes it's very overwhelming.

You look at a developer's roadmap post, video, whatever. There are like 100 stuff over there to learn.

It's very disheartening in the beginning, but I eventually realized that there are some core concepts that are used in many different places.

Going in from that, while studying design patterns, and servers, the word proxy showed up quite a bit. So I did the hard work for you and researched what the hell are proxies and how do they work. I want to share with you what I have learned about proxies (it's not complicated what so ever).

Let's forget about code, and look at the English language for a second.

the authority to represent someone else, especially in voting.

This is very handy in real life, let's say you are your country's president and you have been invited to some semi-important conference, but as a president you're to busy to go there. Your advisors would tell you to simply send someone in your stead, which can be let's say the vice-president or something. He would go in your stead and handle the conference and you would handle your own work. It's a win-win situation. By the end of this, you can say that the vice-president is acting as a proxy to the president.

Going back to technical terms, a proxy is simply a way to hide the client from the server. 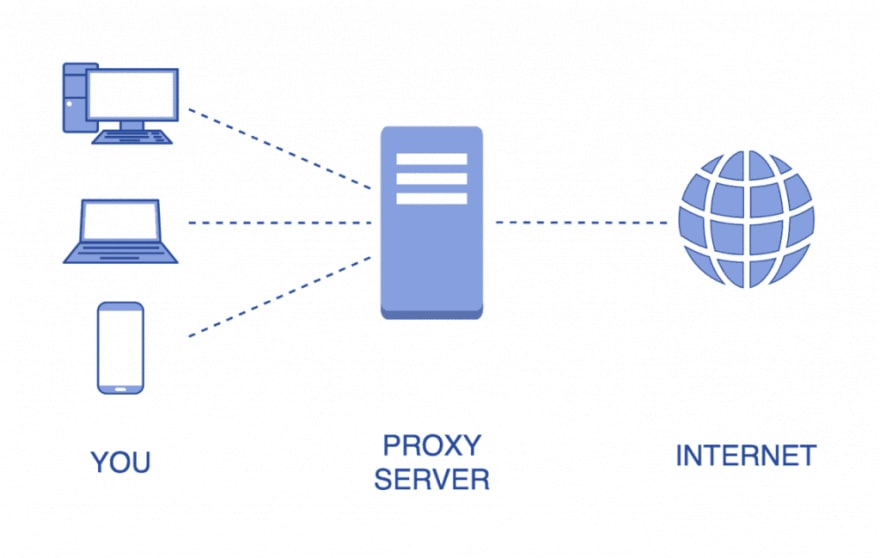 Let's go through the process of going to google.com

In a way your ISP (Internet Service Provider) is a proxy. They do the request for you, and the server (google.com) does not know the client (you). It only knows your ISP which is acting as you but not being you. I know this sounds weird.

Where are they used?

They are used everywhere but let's highlight a couple of key use cases.

I bet you by now, you know what's the meaning of reverse and proxy.

Simply speaking a reverse proxy, is a revered proxy.

A reverse proxy hides the server from the client.

It's simple as that, in the diagram above we are going to example.com, but the client doesn't know which server is it going to, it can be server A, B, or C. You might ask why we would want to do this, well sometimes a single server is simply not enough to handle all the load. Let's say google.com can't only have one server, they go servers per country to support localization. There are many reasons why you would want to implement a reverse proxy.

Where is a reverse proxy used?

Can I use a proxy instead of a VPN for annonimity?

For basic internet usage you can simply use a proxy, but a VPN is superior because they encrypt and secure all of your network traffic, not just the HTTP or SOCKS calls from your browser like a proxy server.

Is proxy just for HTTP traffic?

No, there are many types of proxies. This includes: