We announced at ViteConf that our WebContainers now support pnpm. It was a major achievement in our commitment to support the Vite ecosystem as many projects running on Vite also use pnpm (examples include Vue, Astro, SvelteKit).

What are package managers?

I've also written an “Explain like I’m 5” version of this section!

Let’s start with the terminology. 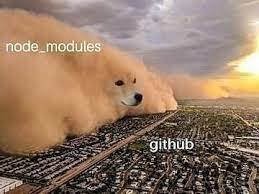 A “package” (or “dependency”) is one or a few files bundled neatly together that can be downloaded from a package registry. Once it’s downloaded and installed, it resides in the node_modules folder in a project’s directory. In this post, I will use the words a Node module, a package, and a dependency interchangeably as many folks in the tech community do. That being said, the npm docs offer a differing opinion so check it out if you’re interested in trivia and precision. 🙂

In the olden times, you’d manually download, install, and configure the dependencies of your app. Keep in mind that most packages are frequently updated, which means that you’d have to always make sure that your project's dependencies (and their sub-dependencies!) are up to date - or that in a given project you use a correct version of a given package. This sounds not only stressful but also unnecessarily repetitive! This is where a package manager comes in.

A package manager is a tool that helps you keep track of all dependencies of your app in a consistent way. It automates the tasks of dependency installation, upgrading, configuration, and removal. It makes sure that all the packages that your app needs are installed, of the correct version, and up-to-date. This frees so much time for coding… and procrastination 🤪

The first package manager for the Node runtime was introduced only in 2010 and it was npm, (which, contrary to popular belief, doesn’t stand for “Node package manager” and, in fact, is an empty acronym). Twelve years later, npm is now managed by Microsoft and there are two other contenders to the iron throne of the package universe: yarn and pnpm.

What do package managers do?

A package manager grabs the published source files from the online registry and installs them into a directory (a folder) called node_modules. This is the folder where your app will look for the packages when you call the require() method.

You can think about the node_modules folder as a box with helpful tools that you can plug into your app so it works in a desired way. Except that all the tools are made of iron (or osmium!) and the box is massive. What I mean to say is that, sadly, prior to pnpm the node_modules folder would usually be bulky and take a lot of disk space. This resulted in a collection of memes such as: 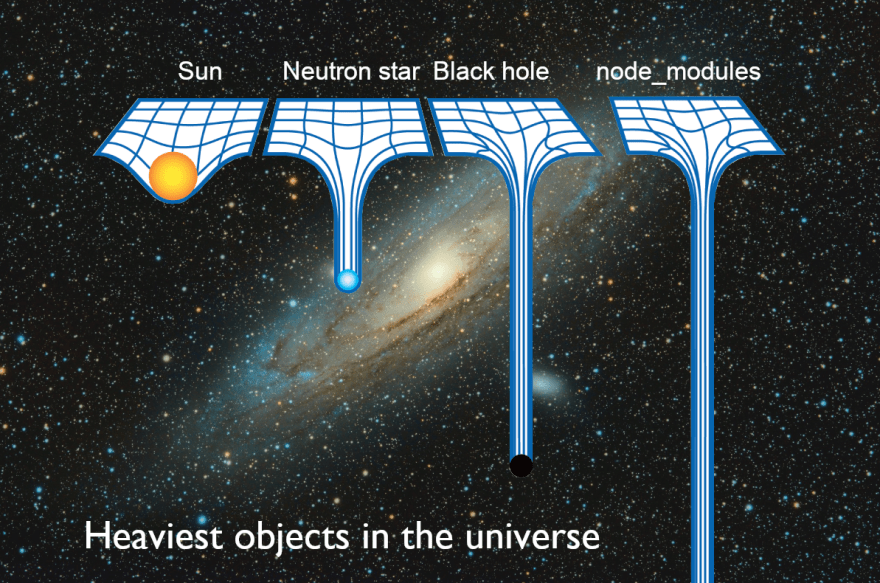 Imagine that you have numerous projects on your local machine, and each project comes with its own node_modules folder. Most likely, many of these projects use a similar stack. In such a case, you end up with the same packages in numerous projects. Duplication and redundancy! Think about all those inspired side projects that never left the boilerplate stage, all the past attempts to check out all the hot new frameworks - all of them are chilling on your precious disk space. 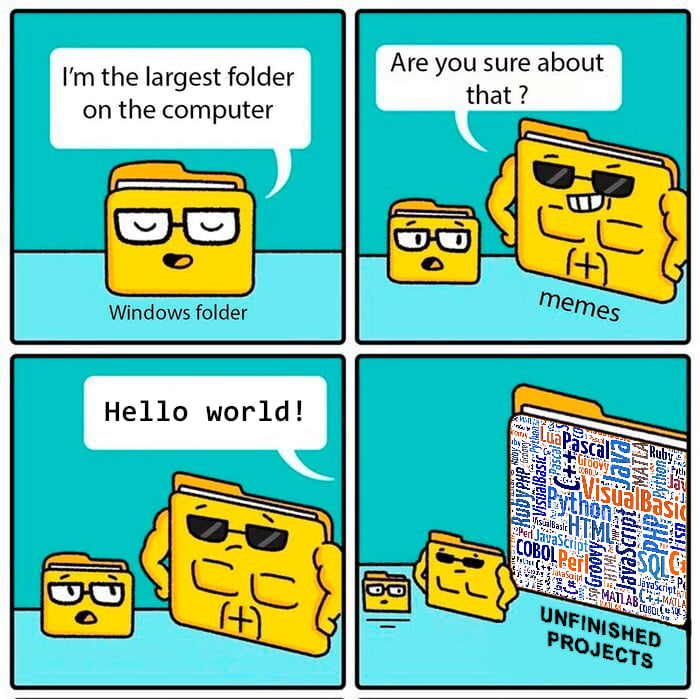 Who cursed the node_modules folder?

To understand these jokes, we need to take a stroll down memory lane and look at how package management has traditionally been handled.

To the best of its intentions and abilities, npm handled the dependencies by splitting the installation (which is triggered by, for example, npm install ) process into three phases:

In this scenario, each phase needs to end for the next one to begin. This means that if one dependency has twenty dependencies itself or if one package takes forever to be downloaded, you may have to wait for a long time. If we follow the birthday analogy, imagine that the wishlist included a new version of a popular phone and a box of chocolates. You end up queuing for a few days in front of the phone store to only then buy the chocolates. In such a system, you can’t “save” your spot in the queue, go buy the chocolates and join the party, even if that looked like a better use of your time. You see that t*he way npm manages its tasks is just not efficient.*

As we said earlier, it is also the matter of the disk space. You will end up with numerous duplications of the same packages. And even if there are different versions of the same package, it is rarely the case that all of the files have been changed from one version to another. You still end up with some number of copies. We can agree that the way npm manages the disc space is not efficient either.

How is pnpm a solution to all our worries and troubles?

On its docs page you can read that pnpm is a “fast, disk space efficient package manager.” It really is fast - locally, up to three times faster than the alternatives - and space-efficient. But - how?

Do you remember the birthday wishlist analogy? As a gofer, npm first collected all the wishes, then bought all the gifts, then placed them in the corner of the party room. Each phase needed to end for another to begin. This is how the npm gofer organizes its way through life.

Well, if pnpm were the gofer, they’d buy the gift as soon as they’ve read the wish, and designated the spot in the room as soon as they placed the order. They may not even have the physical gift yet to already be able to mark the space in the room where the gift will stand. This happens for each gift separately and independently from others. By design, pnpm doesn’t have the blocking stages of installation - the processes run for each of the packages independently.

Let’s talk about food. I love veggie sushi. I order a lot of veggie sushi. I also eat a lot of wasabi and I don’t like waste. Even though it would be fair to assume that such portions surely are to be shared, I usually order just for myself. My order always arrives with two pairs of chopsticks even though I say on the phone that I don’t need them - I have metal ones at home. I wouldn’t just throw unused chopsticks away and now I have a drawer full of them, and you can also see them laying around in the most surprising places in the kitchen. Similarly, I have my own wasabi tube but would I throw away those little sachets? Never. They chill on the shelf in my fridge in an ever-expanding fashion.

My chopsticks and wasabi could work as an analogy for how npm manages disc space. “Oh, you’ve already installed React two hundred times? I’m SURE you NEED the 201st copy!”

To my relief, pnpm checks what is already available on your disk and only adds what you additionally need for your project to run. All the dependencies are located in one global location (for instance, ~/.pnpm-store/ - you can check it by running pnpm store path in the terminal) called “a content-addressable store”. In your project’s node_modules folder there is a .pnpm file that contains the “virtual store” with many so-called “hard links”. it creates one hard link for each file of each package. I like this explanation that pnpm docs offer:

This makes the node_modules folder more like a portal (like the wardrobe in Narnia) to files located in different nooks of the global store, and not like a bloated storage unit. This diagram illustrates the strategy employed by pnpm:

But, does pnpm “know” if there are duplicate files between two versions of the same package? Yes, because, just like git, it identifies the files by a hash id (called also “content integrity” or “checksum”) and not by the filename. This means that two same files will have identical hash id and pnpm will determine that there’s no reason for duplication.

pnpm has got your back

There are so many ways that pnpm looks out for you. One of them is that it is impossible to invite silly bugs by trying to use modules that are not directly specified in the project's package.json but, for instance, are required by your project’s dependencies. While it’s not the end of the world if everything works well, what happens if your project’s dependency no longer requires one of the packages and as a result it is no longer available in the the node_modules folder? Well, everything crashes and you don’t even know why.

Such bugs may happen in npm and Yarn Classic because of the flat node_modules directory because during installation, they hoist (elevate) all of the packages to the node_modules , regardless of whether they are directly required by your app or not. As a result, your project gets access to distant “relatives” of its dependencies.

…but what if my project doesn’t support symbolic links?

And even if your project presents an edge case and doesn’t work well with symbolic linking, worry not! You can still use pnpm but set it to an npm-like mode. While it will not be space-efficient, it will still be faster.

But… what about Yarn?

There are two editions of Yarn:

Yarn Classic operates similarly to npm with regards to managing the node_modules folder. Yarn Berry, on the other hand, offers three solutions:

The Plug’n’Play seems like an intriguing option but it has been met with the community’s apprehension as the .zip files are not so easily accessible during the dev workflow. The earlier-mentioned post by TakeShape explains some of the other challenges.

Considering how space-efficient and fast pnpm is, it is not a surprise that more and more projects make a move towards it and that its popularity is rapidly growing. This year, the weekly download rate for pnpm was seven times as high as last year!

If you’re interested in learning about why projects choose to switch to pnpm, check out these posts by Gestalt and TakeShape.

Here are further readings that may give you a better understanding of the current landscape of package managers:

Come work with us on package managers!

While you’re here, an announcement: we are looking for a new team member who will work on package managers including pnpm, npm, yarn, and our own Turbo. Interested? Apply today or reach out to me on Twitter!

DataOps 101: An Introduction to the Essential Approach of Data Management Operations and Observability

Once suspended, stackblitz will not be able to comment or publish posts until their suspension is removed.

Once unsuspended, stackblitz will be able to comment and publish posts again.

Once unpublished, all posts by stackblitz will become hidden and only accessible to themselves.

If stackblitz is not suspended, they can still re-publish their posts from their dashboard.

Once unpublished, this post will become invisible to the public and only accessible to Sylwia Vargas.

Thanks for keeping DEV Community 👩‍💻👨‍💻 safe. Here is what you can do to flag stackblitz:

Unflagging stackblitz will restore default visibility to their posts.