Within minutes, you will be able to deploy a static site/blog (with Publish) that you can style easily (with TailwindCSS).

If you don't want to create your own theme, you can save some time and use my Casperish theme, a port of Ghost's Casper theme using Tailwind CSS.

Publish is a static site generator built specifically for Swift developers, created by John Sundell (@johnsundell) and powering his very own swiftbysundell.com.

You need to have installed Xcode and its Command Line Tools. It's preferable to have a basic understanding of how it works (build, run, understand crash logs).

For now, open your terminal and follow the README.

Publish is just the engine, it's now time to create your website.

Let's get out of /Publish and create your website source next to it. We'll call it MyWebsite.

And since we're impatient, let's see what it looks like at this point.

Open http://localhost:8000 in your browser of choice (Safari here) and it should look like this: 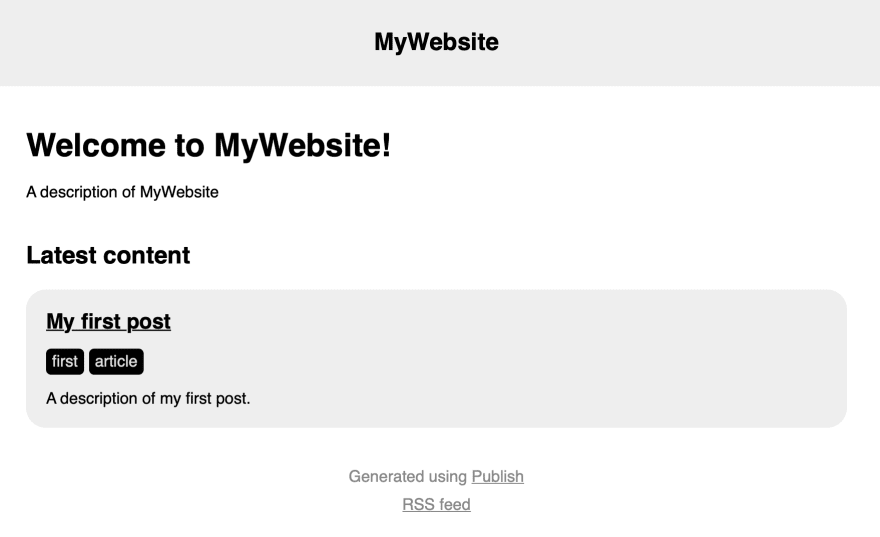 or in dark mode: 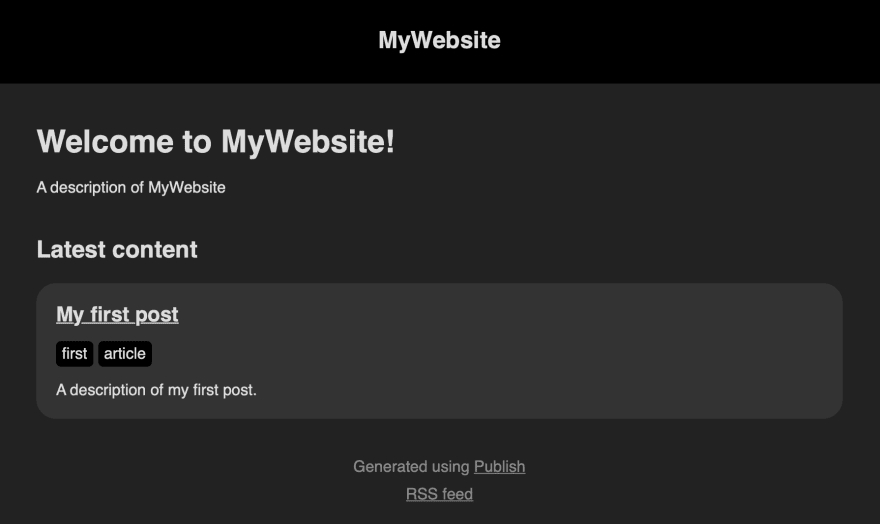 We've been lazy alright, it's time to open Xcode and dive into some code. 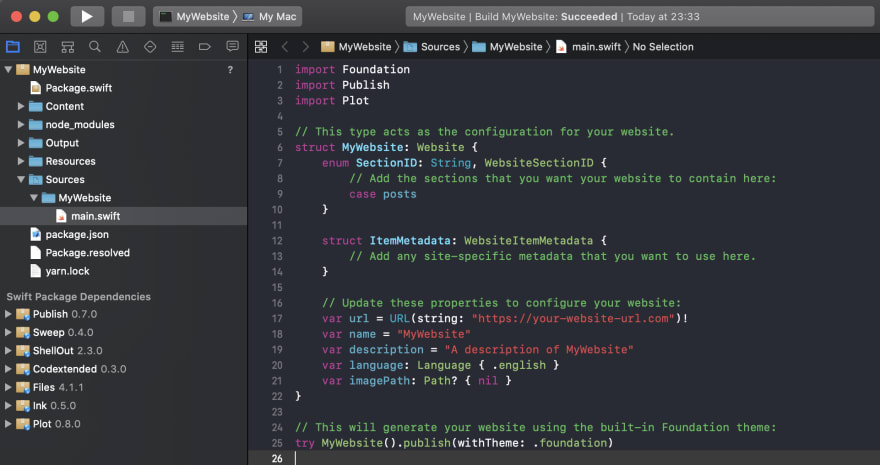 A couple things to notice:

Pause for coffee and think about your future

From now on, before your refresh your browser to see the result of any change you made to your configuration or content, don't forget to rebuild your site in Xcode using ⌘+R.

Getting ready for TailwindCSS with a new Plot theme

To build the website from the Content folder, Publish used its default theme called Foundation which is two parts:

As you may have guessed, we need to build our own theme.

What do we need to do?

Let's start with the end and work our way up.

We will tell Publish to use our own theme, so open main.swift and change the last line (should be line 25).

Alright. Except this won't work of course so don't try to build or run right now.

Now we need to define myTheme somewhere. We'll just create a new theme file in the Sources, next to /Sources/MyWebsite/main.swift.

Let's call it Theme+MyTheme.swift (from Xcode, right click on the Sources/MyWebsite folder and "New file").

But what should we put in there? The Publish README explains how to build a custom theme. Again, we'll write things as they should be in the end, and work our way up.

So we want to end up with something like this:

What did we add there that doesn't exist already? Two things:

Looks familiar? This is the same setup I mentioned above when I introduced the Foundation theme.

If you open the Theme+Foundation.swift file (you can find it in Xcode under "Swift Package Dependencies" by opening the Publish package and going down to /Publish/Sources/Publish/API), you will

MyThemeHTMLFactory: Our own HTML Factory

We want to build a custom theme, so let's take inspiration from the free one we're given.

In Xcode, under "Swift Package Dependencies" you will find the Publish package, and inside of it is Publish/Sources/Publish/API/Theme+Foundation.swift.

A few lines below the public extension Theme declaration that we don't need since we just defined our own, you will find the foundation factory that we will use as a starting point.

So to be clear, Theme+MyTheme.swift should look like this

We will also add the typography plugin since we're dealing with Markdown, and this plugin was specifically created to add beautiful typographic defaults to any vanilla HTML you don't control.

From /MyWebsite, open your terminal and run:

Open theme.css in Xcode, and add those lines:

Open the tailwind.config.js file it created in Xcode and add the typography plugin.

Now to give this a spin and make sure it works so far, let's use the tailwind cli (from within /Resources/MyTheme)

TADA! We now have our .css file

At this point (or anytime you make a change), you can just run the package Product > Run (or ⌘+R) and refresh your page in the browser (assuming your server, launched with publish run is still running). 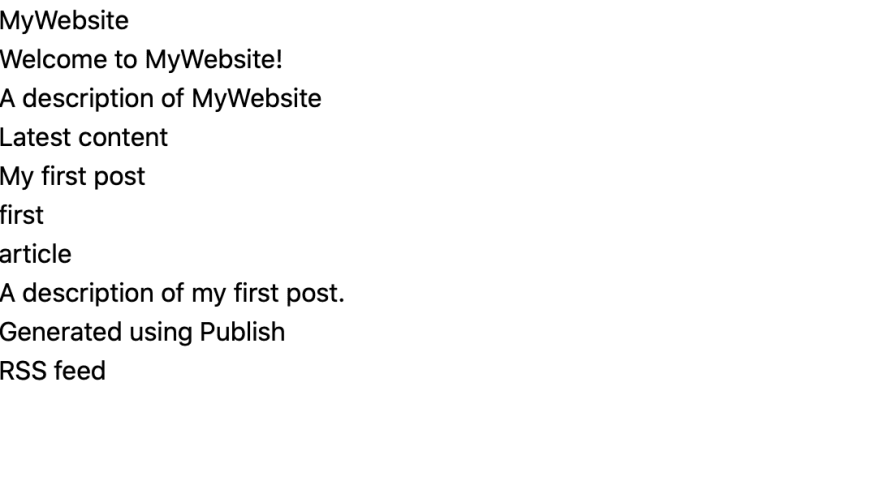 So, that's a step back for sure.

But now, you can ride like the wind and build your own theme using Tailwind!

We already know it works since all styles were reset, but let's add a class to make sure it really does.

Open your Theme+MyTheme.swift file, locate makeIndexHTML() and change the header as explained below: 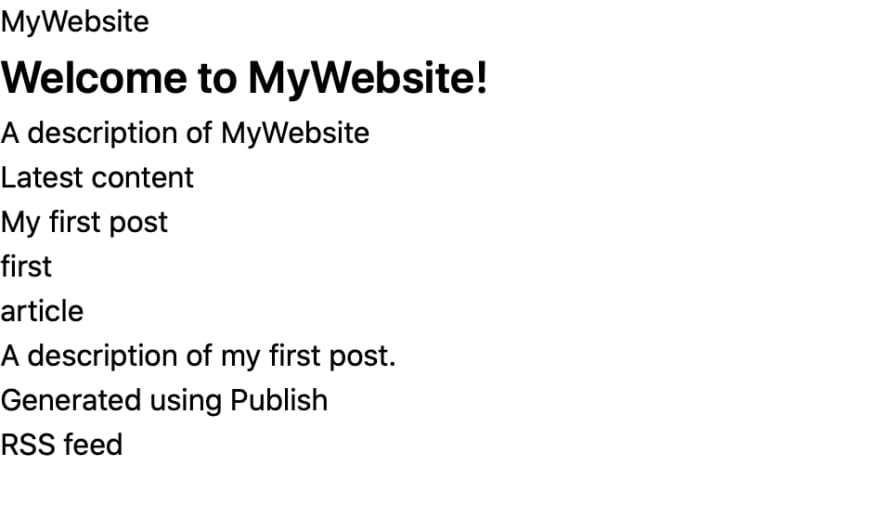 That's not much, but there rest is up to you, sky's the limit.

Right now we included all TailwindCSS styles in the styles.css file, so the file is 10 times bigger than it could be.

In order to shave off a few pounds, we'll setup purge in the tailwind.config.jsfile, which should end up looking like this.

It will only keep classes present in your theme file (assuming you did name it Theme+MyTheme.swift otherwise you need to adjust the content line).

Now we need to re-build the styles.css. Before you do it, check the number of lines in your current styles.css file so you can compare before/after the purge.

And with this, we are done!

Don't worry, I got your back! 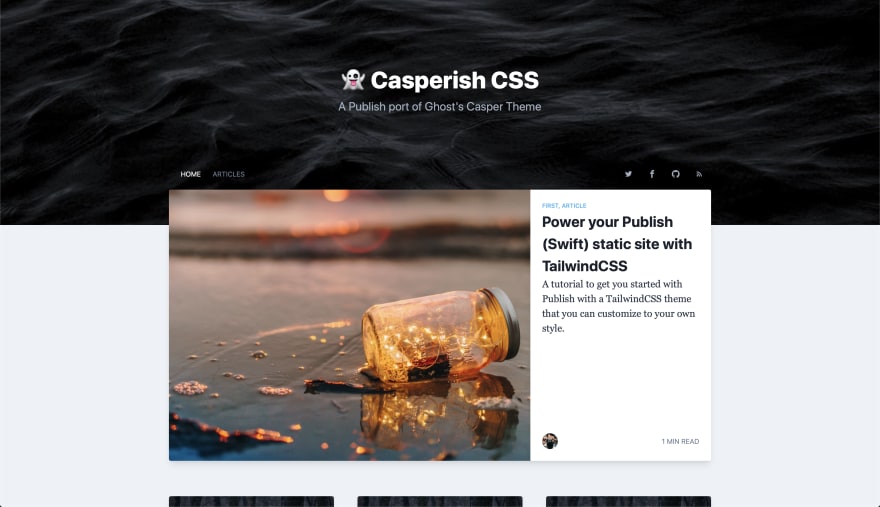 Once suspended, sowenjub will not be able to comment or publish posts until their suspension is removed.

Once unsuspended, sowenjub will be able to comment and publish posts again.

Once unpublished, all posts by sowenjub will become hidden and only accessible to themselves.

If sowenjub is not suspended, they can still re-publish their posts from their dashboard.

Once unpublished, this post will become invisible to the public and only accessible to Arnaud Joubay.

Thanks for keeping DEV Community 👩‍💻👨‍💻 safe. Here is what you can do to flag sowenjub:

Unflagging sowenjub will restore default visibility to their posts.