This week was going to be my productive week. It started strong, with some heavy planning and meetings. But then.. Russia attacked. I have not been doing much work on the issues I was assigned to. Sorry. I am trying to do some right now, not sure how much I will get done.

This week's meeting had a goal of getting up to speed. Here's the plannning project updated.
Here is what was raised during the meeting:

The current theme for this week is to figure out where you are, figure out what you want to do. Next week, being the study week - focus on research. If you have any new ideas, share them now, the window for new things is closing. After that - polishing. That means bugs, testing, docs, guides.

There was something new I introduced - thinking about the next generation. That involves having proper issue descriptions. Good first issue labels. For next year - leaving behind guides, docs, videos even. What you have been doing this semester - tell it to them, they will be as lost as you were once. This theme is not our current focus, but soon it will be. I want people to be aware of this direction first and not have it as a completely new concept when we will need to act on it.

I asked people what areas have they worked on so far and what areas they are interested to work on next? Turns out, many are interested to get into docker and supabase. Including me. If I never asked that of everyone, we wouldn't even know there was such interest. Based on that information, the focus of upcoming issues will be in docker and supabase. I also thought we should make a meeting on it.

I was worried the meeting will not take enough time and we will have to do triage things, but we never even gotten to that. People had things to discuss, which is great.

Before the triage we, sheriffs, met and sorted all the issues we had so far. This is the middle point of our semester, we need to realize where we are at and decide where we are heading. We can't really plan for 2.8 release, if we don't yet know what we want to get done for 3.0 release. We should go from largest to smallest deadlines to really have an idea of our priorities.

We used this project. We had 4 priority levels:

There have also been made 2 unknown categories:

We are not sure on how well we judged the issues, but at least it now gave an idea of what to do next. I don't know if this is something other sheriffs will do after us.

The meeting went in the order of priority with some talks mixed in. I did not pay attention as much as I wanted to, at this point war just started that night and I haven't slept yet as I was monitoring the situation. Generally, I think it went well.

There is something I want developers of Telescope to do better. Communication. It is part of my role here, I connect the channels, I summarise the information, I ask the questions. I did that during our meeting - "what do you do?" And they answer. But they only tell if I ask. I wish people shared more on their own. Issue comments, slack, discussions, making meetings themselves even. We should be aware of what others are doing.

Next week, study week I declared as a week of research. Having no deadlines due that time, it is both a lenient enough task to have time to relax, and is also a unique direction to pursue, when else will be get a week without any classes? I personally will research Slack bot stuff, my Docker issue and automation stuff. Technically study week has no sheriffs, but I want to continue being one for that time too.

I want to make a stream with people to have them talk about Telescope. And to stream my docker issue, since people are interested in that. I'm not sure how much I will get done.

This is not related to coding.

Ever since it started happening, all I have been doing is refreshing the map, searching for news and updates, talking about it, thinking about it, listening about it, dreaming about it. I am Ukrainian. All my family is in Ukraine. I am trying to do assignments, and sometimes I end up doing something, like writing this post.

This is where my family lives. Kiev, Obolon'. Both apartments in there. In one lives my mother, in the other - grandma and aunt. 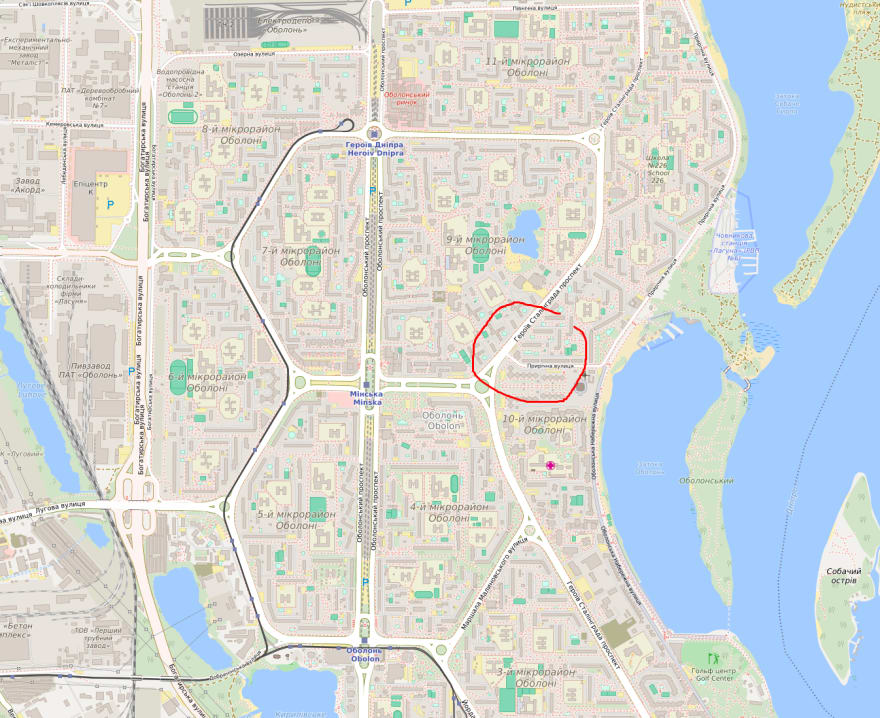 Now this is the most dangerous area in Kiev. Kiev is the capital. I see videos of tanks driving there. I know these surroundings. Oh look, here's a tank. Here's another. (Person in the car survived) All of this right there, right where they live.

Right outside of Kiev to the north - is the front line. 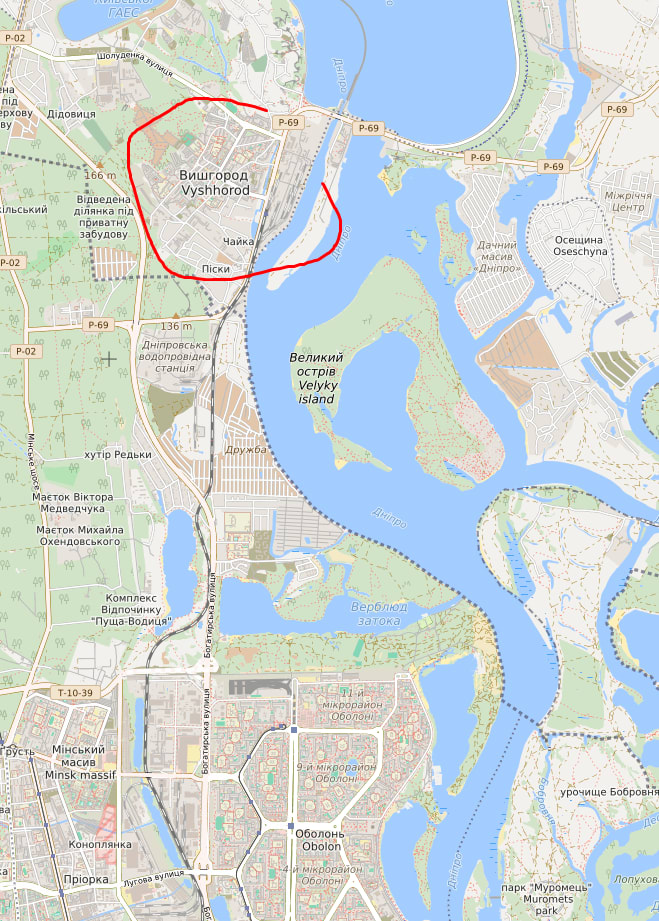 This is where my classmate has her house. I went to her... 9th? birthday party there. And it's where my friends of family live. I would come there in summer, I remember I tried my first energy drink there. Who knows how fucked it all is now - they gotten past it to my district...

Here's Chornobyl. The power plant that blew up and spread radiation all over europe at some point. (If you're curious, watch HBO's Chernobyl, it's pretty good.). ~80km North from where I lived. 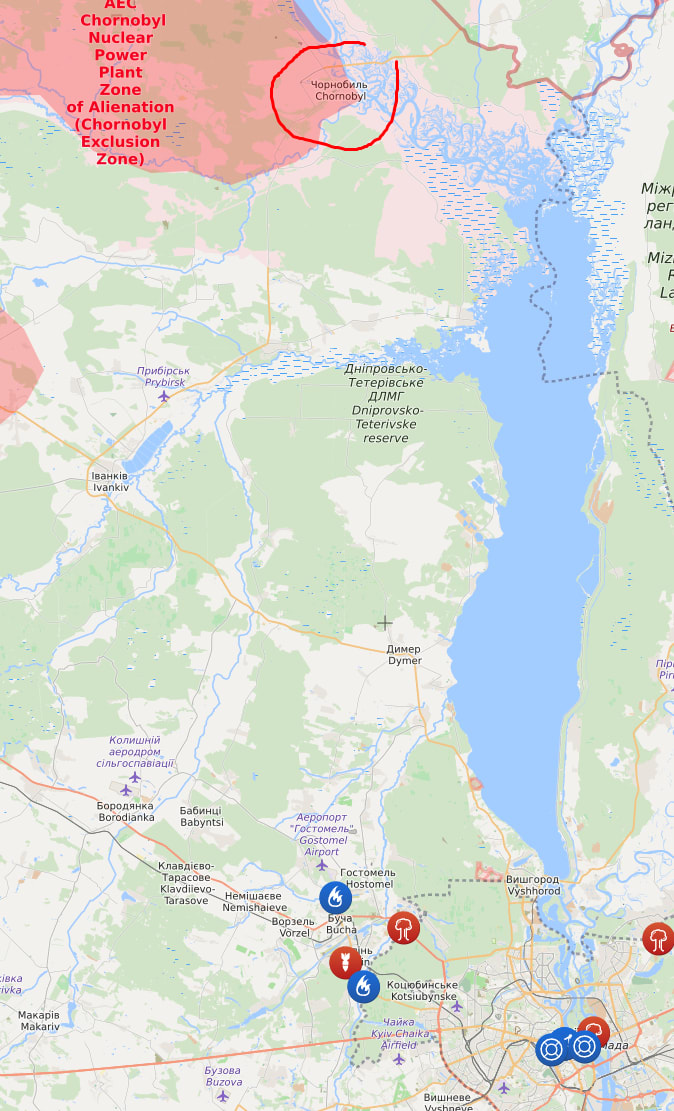 Now there are crazy high readings of radiation, since there was a fight and apparently something was hit that shouldn't have been hit. 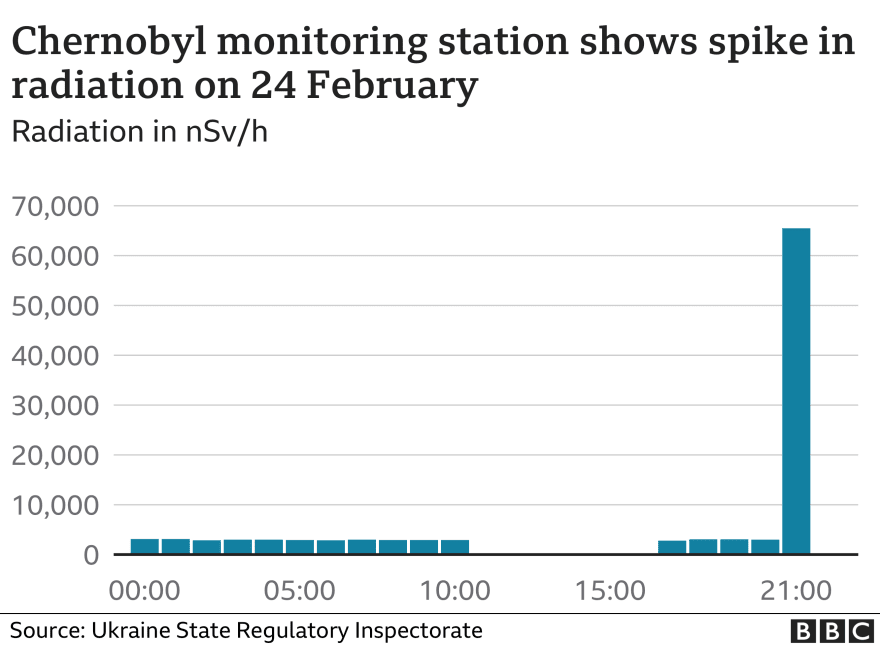 My family didn't want to leave. Reminded me of this:

Mom decided to leave, but didn't know where.
After a day of nothing I have finally gotten an update from them. She convinced them to leave, just as the fight started. Took them 6 hours to drive 140 km. They are now in a small town away from the front line. Mom is definitely for leaving the country, not sure about others.

Civilians are open to go and get armed to fight. A guy I know tried to get armed today, and couldn't. The line was too big - they didn't get to him. I think I would fight too if I lived there. My family would probably be against that decision. All my Ukrainian friends are out of the country, thankfully. Rumors keep spreading that this night will be the time when they storm Kiev. I don't know how true that is, I guess we'll see.

Before this started, people on both sides - Russia, Ukraine thought it was all posturing. No war is gonna happen, cmon... Everyone was shocked. I fear for my friends in Russia. They might lose contact because of the government. Could do something with internet like they have in China. Economy has tanked over there. Protests are happening in Russia, but if you know how those usually go... well, not great. I don't know if it will be enough people to not just get everyone jailed in the end. Like it usually happens.

Here is what I keep checking. A live webcam compication. Not specifically this one, just search "ukraine live webcam" in live videos. I keep hearing alarm go off in Kiev and sounds of explosions from time to time there.
This map is great. You might need to keep refreshing to make it work, it is pretty overloaded these days.
I keep reading a telegram chat on my inline skating group I used to skate with, they share where they hear explosions, what's the situation like.

As I keep refreshing the map, I keep seeing news about regions that I recognize. Oh, Odessa, we went for a Linkin Park concert there. Oh, we went for a holiday to Herson and I got sick there. Oh, a dude I played this Spore roleplay game is from Chernigiv. Many like these. I wouldn't say I'm very patriotic. And yet I care enough to have this be my main activity ever since it started. I don't know what I expect to see. Nukes? EU support? Ukraine captured? President killed?

I don't have anger towards people that don't care. It is not their country. I enjoy the memes and jokes, jokes are meant to be funny. I don't hate Russian people - they are just like us, but do they have a country to run to?

What are the hottest dbt Repositories you should star on Github 2022? - Here are mine.

Once suspended, sirinoks will not be able to comment or publish posts until their suspension is removed.

Once unsuspended, sirinoks will be able to comment and publish posts again.

Once unpublished, all posts by sirinoks will become hidden and only accessible to themselves.

If sirinoks is not suspended, they can still re-publish their posts from their dashboard.