Last week I heard back from a company hiring for a production engineer, and they told me that I passed a coding challenge I'd taken a month prior, and I'd be having an interview in a couple weeks. I was ecstatic!

They provided details on my interview, that would be split into three parts:

I had never ever heard about System Design, but I had two weeks until I was going to interview for this awesome position. So I decided to hit the books.

The definition of a System is a set of things working together as parts of a mechanism or an interconnecting network.

In this way, System Design for Software is similar to a Library System.

If you wanted a convenient way to share books between people, you might build a small library, maybe with a single person handling all the tasks of library-ing like:

What if your library starts to gain popularity, and soon hundreds of people are coming in to use it? You may need to design the library infrastructure such that it reliably serves the increased library traffic. Maybe you'd add shelves to hold more books? Maybe you'd assign specific jobs to specific people (e.g librarian etc.). Perhaps each person might have a backup who's on call in case they are sick? This is one example of designing a reliable and efficient library system.

In this same way, if you write some code that does something useful, say... a library API. Maybe you built a single application that:

And let's say that people love using your API, and a lot of people want to use it, we mean MILLIONS of people. You may add more servers and databases? Maybe you'd separate your central system into modular systems for each API service? Maybe you'd install backup servers or databases to make sure the API is always available. This is one example of software system design.

Is This Important To Know?

Here's what I think the perks of knowing the basics of System Design are:

Overview of a Basic System

First, Some Terminology For Future Reference

Client: For all intents and purposes, consider it as an entity that makes requests of servers. This could be a React application making a fetch request, or a browser requesting access to a URL.
Server: It's a computer/program that takes requests from the client directly or from another component and interacts with other components like a database. This is like a controller/model pair in Rails that persists, retrieves, or updates things from a database.
Service: Pretty ambiguous term. It's a feature-specific thing the system does for you. This is like an URL shortening Service, or Netflix Streaming Service.
Database: Structured data held in a computer that persists. These are like your SQL databases hooked up in a rails backend
Request/Response: Communication typically sent between client/servers following an application protocol like HTTP. I can't really explain it better than this.
Latency: How long it takes to get a response.
Bandwidth: How much data can be passed through (aka throughput).

At a very high level, the two main pieces of a web application are:

The Frontend Client: Anything that is making the request to the backend server(s). In a Rails-React app this would mean the React project would be the Client.
The Backend System: The part that handles requests from the Client through HTTP or similar requests and persists data if necessary. This could be a cloud service, or an API that I built in backend hooked up to a PostgreSQL database.

The System simply takes requests, handles it, and gives a response back to the Client. System Design focuses on the Backend System.

Down One Level: System Architectures

So far, in the past two days, I've learned of two structures/architectures for the System: the Monolith and Microservice Architecture.

Put simply, a Monolithic System Architecture means you have a backend system whose full functionality resides with a single unit (think of it as one giant program or machine). This architecture "style" applies to the servers as well as the database.

Server: Single program/machine that handles all fetches for all resources

Database: If you have a single database holding all the data.

If you ever built a Rails backend, that is a completely monolithic architecture. I'm pretty familiar with this so this was a bit of an 'Ah-Ha!' moment 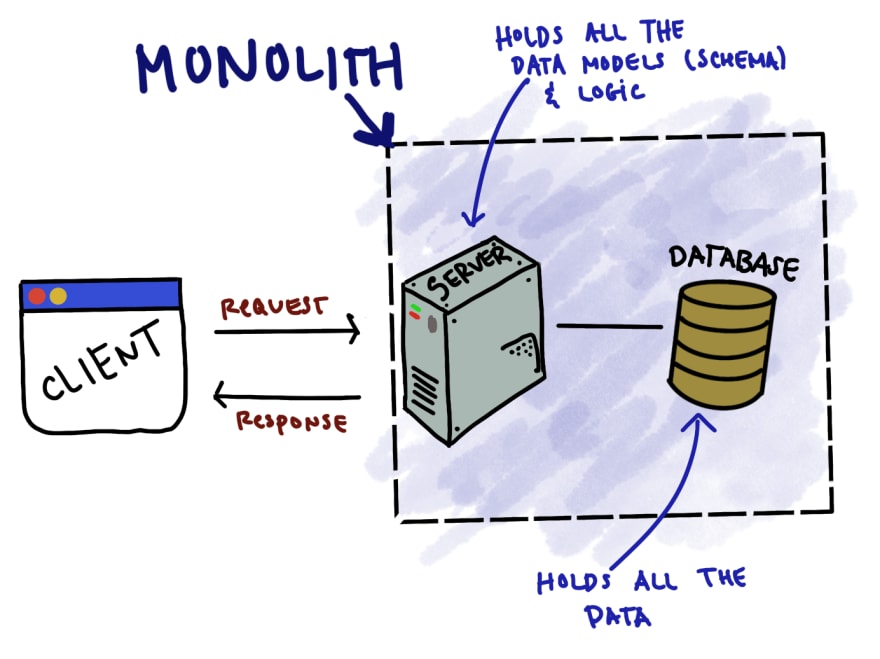 Microservice Architecture means that you split responsibility among different units, thus being modular. This also applies to both the server and the database.

Server: If you have separate programs/machines that focus on taking fetches for different resource (or service).

Database: If you have multiple databases, perhaps one database for each resource.

I have never built anything based on this architecture, but I have heard of some technologies that use this architecture such as MongoDB for databases and Microsoft Azure for servers. I would like to get some hands on experience at some point, hopefully before the interview. 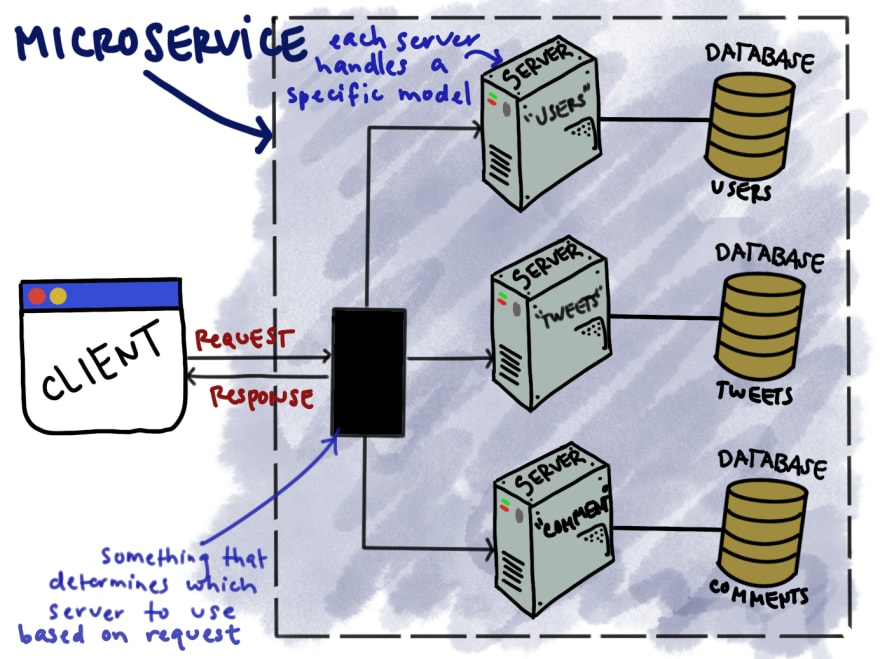 Just like there are principles when writing code (an example being the 4 Pillars of Object Oriented Programming), there are also System Design Principles. Here's what I found in my studies:

As I'm learning more about the components in Monolithic and Microservice design, I'll keep these principles in mind, as they typically govern why one design decision is made over another.

So, if I were trying to build my own software product, which one should I use?

As someone who has been learning about this for less than 2 days, I don't know the definitive answer. But from my research, there are advantages and disadvantages of both systems and typically it's wise to incorporate both architectures into your system to reap the benefits of both.

What has been covered in this blog post is very High Level Design. Actually implementing these architectures (Low Level Design) is incredibly complicated and I am currently learning how to further break down systems into functional components before I apply my coding skills to implement them. There is so much left for me to learn, and I'll be trying to cover them in some subsequent blog posts. My hope is that it might help another developer with little to no knowledge of System Design feel less intimated by the subject and find some direction so they might also get prepped to take an interview that involves System Design.

If at this point, you're still interested in learning more, I'll leave a couple resources at the bottom of this post.

The next steps in preparing for my system design interview will be:

1) Learning the specific components of a distributed system (Caches, SQL, noSQL, Load Balancers, Proxy Servers) and understand their uses and how they work.
2) Learning about strategies for optimization such as Data Partitioning, Indexing, Consistent Hashing and other words that at this point sound like jargon to me.
3) Understanding the process of answering system design questions in an interview environment
4) Breaking down a couple large well known system services such as Facebook Messenger, Instagram Posts, Netflix Streaming and trying to explain it in a way that even I can understand it.

I'll see y'all in another blog post!
Good luck with your own endeavors!