In the previous – Kubernetes: part 3 – AWS EKS overview and manual EKS cluster set up – part we started an EKS cluster.

kubectl is working, all good.

But when my team’s backend developer performed the aws eks update-kubeconfig command to configure the kubectl tool on his macOS and made the first attempt to connect to this cluster – he got the next error:

Both users – mine, as I created this cluster using my own IAM user, and our backend developer – have FullAdmin grants on their AWS accounts – what can be wrong here?

Well, let’s dive a bit into EKS and AWS authentication and authorization process.

In this topic will we speak about:

And in the next part – we will see what is RBAC in Kubernetes and how it is used for users authorization.

At first – let’s quickly check the difference between a user’s authentification vs authorization.

Authentification is a process when a client has to prove a server that he is who he claims to be.

For example, after we create an EKS cluster – we started Worker Nodes instances. They have to make a call to the EKS’ API-server to connect to the cluster.

During that – the API server has to have an ability to check what is the client asking him to act as a Worker Node and it has permissions for this.

For this Kubernetes has authentication modules or authenticators: when API server receives a request from clients, whether it a client like a kubectl tool, a new Worker Node, or just an HTTP-request made with curl – Kubernetes will ask one of its configured authenticators to validate this client.

All available modules can be found in the documentation, but for now, we are interesting in one that is used in the AWS Elastic Kubernetes Service – the aws-iam-authenticator which is used with AWS IAM to check users.

After our client will pass the authentification process – Kubernreets has to check if this user can perform exactly an action called by the client, for example – if it has permissions to execute kubectl get pods command.

If recall AWS IAM policies – we can see permissions that are granted for a particular API-calls, for example: 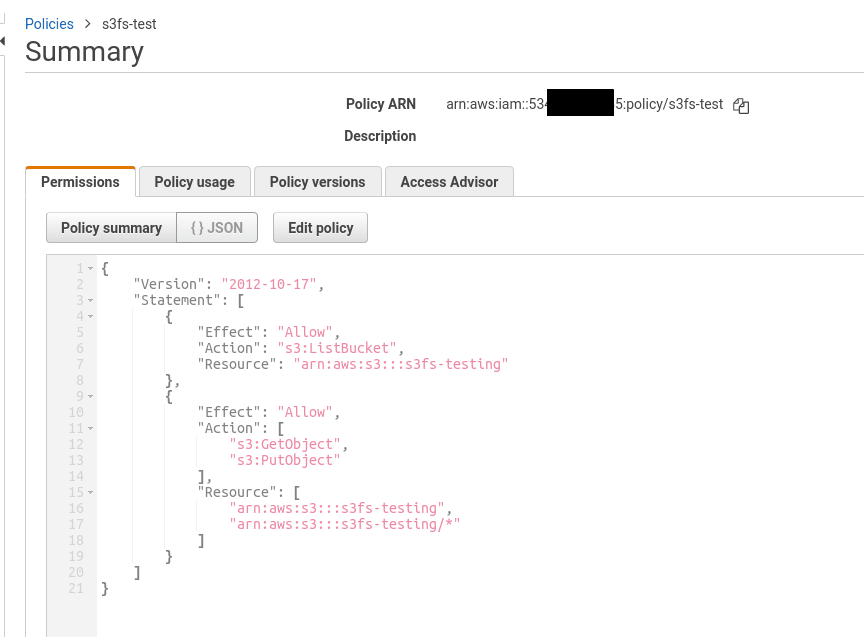 Here in the Action, we are setting permissions for some user who will use this policy. If this user will try to execute the “s3:DeleteObject” call – AWS will decline it as this request wasn’t specified in the policy for this user (and the whole AWS is working via API-calls in the same way as it is in the Kubernetes).

Kubernetes will pass a user who already was validated with an authentication module to an authorization module to check for its permissions and after that API server will decide if it has to perform an exaction requested by the client.

See the documentation here – Controlling Access to the Kubernetes API.

In the post below we will see how the authentification process is working in AWS EKS with AWS IAM and in the next one – will speak about the authorization and RBAC in Kubernetes.

The process is greatly described in the picture below:

In the case of AWS EKS, this identification can be an IAM-user’s or IAM-role’s ARN (Amazon Resource Name).

Kubernetes authenticator in its turn will pass the identificator extracted from this token to the AWS IAM service to check if the user specified in the token is really the one he is clams to be by using the AWS IAM Authenticator service which is running on the EKS Control Plane.

E.g. the process is: 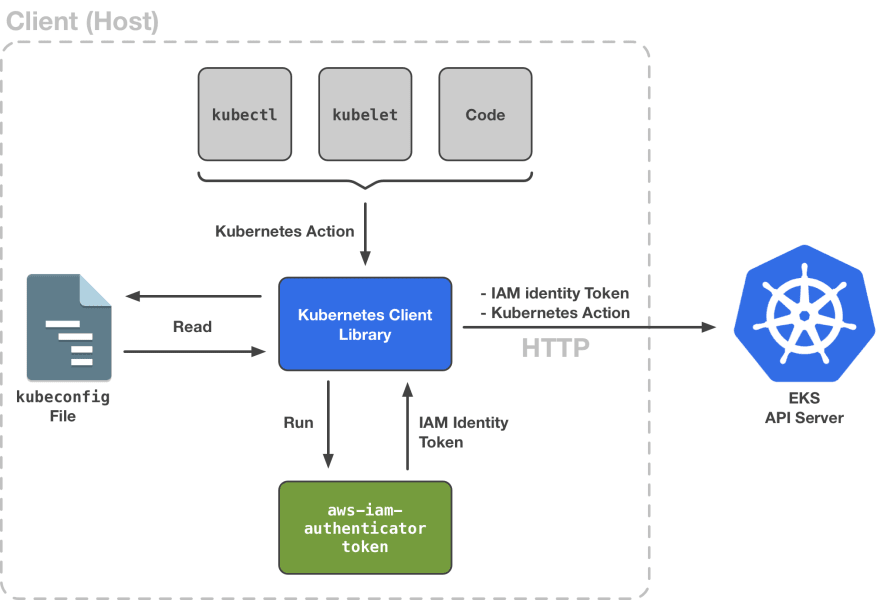 Let’s use the kubectl on a local workstation as a client to see the whole process.

So, kubectl first will check the ~/.kube/config file where it will take an EKS cluster’s API-server URL:

Next, take a look at the next part of the config file, especially we are interested in the exec and particularly – in the command and args:

Which describes the command to be used to get a token for EKS authentification by using the AWS CLI command – aws eks get-token.

It will be interesting to play a bit with the WS API authentification, some quickly googled examples can be found in the Developer Guide for AWS S3, and if will have time – maybe will try to do the whole work just by using the curl utility, as under the hood AWS CLI just issues an API-requests to the AWS core in the same way as we can see it in the kubectl and Kubernetes API-endpoint.

Now – let’s use the command specified about in the command section and let’s pass arguments which are set in the args:

Here is what we got in the case above:

The Amz-Credential=AKI***D4Q field contains our user’s ACCESS_KEY taken from the arseny AWS CLI profile (will speak about profiles in the AWS profiles):

In the same way instead of the AWS CLI, we can use the aws-iam-authenticator to obtain a token, to make our process absolutely the same as per picture above.

You can install it on the Arch Linux for the AUR:

And get your token:

You can also manually edit your kubectl‘s config to set aws-iam-authenticator instead of the AWS CLI.

So, replace the next part:

With the next one:

So, we saw that kubectl just gets a token by using a command specified in its ~/.kube/conf config by using or AWS CLI (/usr/bin/aws) or with the /usr/bin/aws-iam-authenticator.

Let’s take a look at the env section in our ~/.kube/config:

Here we are setting an AWL CLI profile’s name which will be used to get a token, check the AWS: CLI named profiles post for details.

For simplicity – save the token to the $token:

And use the curl to connect to the API Server:

In the same way, kubectl will perform its own requests to the EKS.

By the way, you can see all those requests in the CloudWatch Logs if you enabled them for your EKS cluster.

At first, I was surprised – why I’m seeing the heptio-authenticator-aws service in the logs if AWS documentation tells about the aws-iam-authenticator? Check the Managing Cluster Authentication.

But the answer is simple: before the 4.0 version aws-iam-authenticator was called as heptio-authenticator-aws.

Okay, so we already checked how the authentification is working from the client-side – what about AWS EKS then?

Then, the “authentification magic” happens here: now the aws-iam-authenticator has to:

If go back to the Kubernetes: part 2 – a cluster set up on AWS with AWS cloud-provider and AWS LoadBalancer post – we created a ConfigMap there which is looks now as the next:

Here in the arn:aws:iam::534***385:role/mobilebackend-dev-eks-0-wn-stack-NodeInstanceRole-15NNFZK6WW4IG line we added the role ARN which is used as the Instance Role for EC2 with our Worker Nodes which will be checked for permissions.

Adding a new user to the cluster’s ConfigMap

Finally, let’s go back to the very beginning of this post: why another IAM-ser got the “You must be logged in to the server (Unauthorized)” error?

Well, it’s kind of obvious from what we saw in the ConfigMap – because there is no such a user and thus – Kubernetes can’t check its permissions (actually – because this user has.

Update your ConfigMap – add a user’s ARN, its login and set its group as system:masters:

Check on the cluster – find the ConfigMap:

The final thing I’d like to speak about is the Creator user: the IAM entry, which was used to create a cluster will become its super-admin.

But still – you can find the Creator by checking the CloudTrail by the CreateCluster API-call to the AWS:

The Support’s answer about any way to see the “root” user was the next:

At this time, the IAM entity that creates the cluster becomes the first cluster administrator. This entity is passed to

the master nodes and is not visible from the aws-auth ConfigMap. This is similar to the root user for your AWS account

in that it has the system:masters permission.

Why Are We Still Having ‘Works on My Machine’ Problems?

Docker vs Kubernetes, which should I use?

The ultimate guide to secure cookies with web.config in .NET