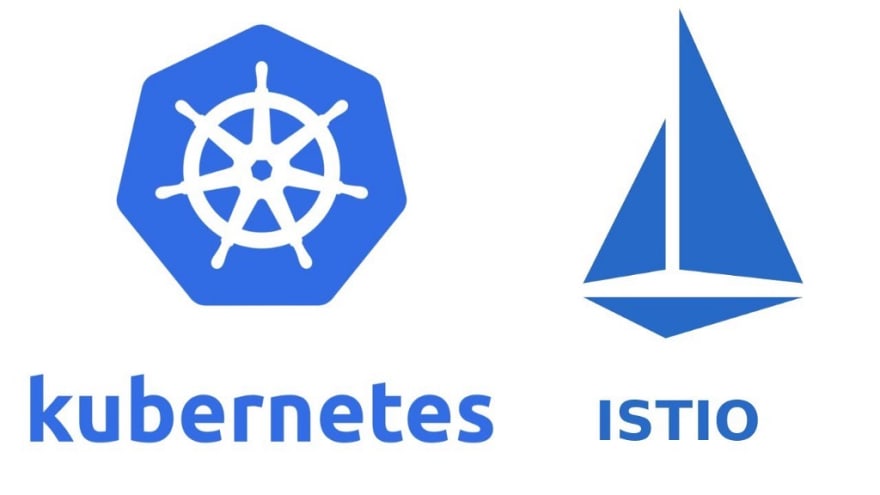 We will use Istio in our AWS Elastic Kubernetes Service for traffic monitoring, as an API Gateway service, for traffic policies, and for various deployment strategies.

In this post, will speak about the Service Mesh concept in general, then will take an overview of Istio architecture and components, its installation process, and how to run a test application.

Essentially, it’s a proxy-services manager. As a proxy service there can be systems like NGINX, HAProxy, or Envoy, working on the Network OSI Layer 7, that allows for dynamic traffic control and applications communication configuration.

For the traffic control in a service mesh for each application or in the case of Kubernetes for each pod, a proxy service called sidecar is started alongside the application.

Together those sidecar containers are known as a Data Plane.

For their configuration and management, there is another process group called Control Plane. They are used for new applications discovery, encryption keys management, metrics collection and aggregation, and so on.

A service mesh can be displayed as such a scheme:

Among many Service mesh solutions I’d mention the followings:

Read more (all links in Rus):

So, Istio as a service mesh consists of two main parts — the Data plane and Control plane:

Istio architecture can be represented as the following diagram: 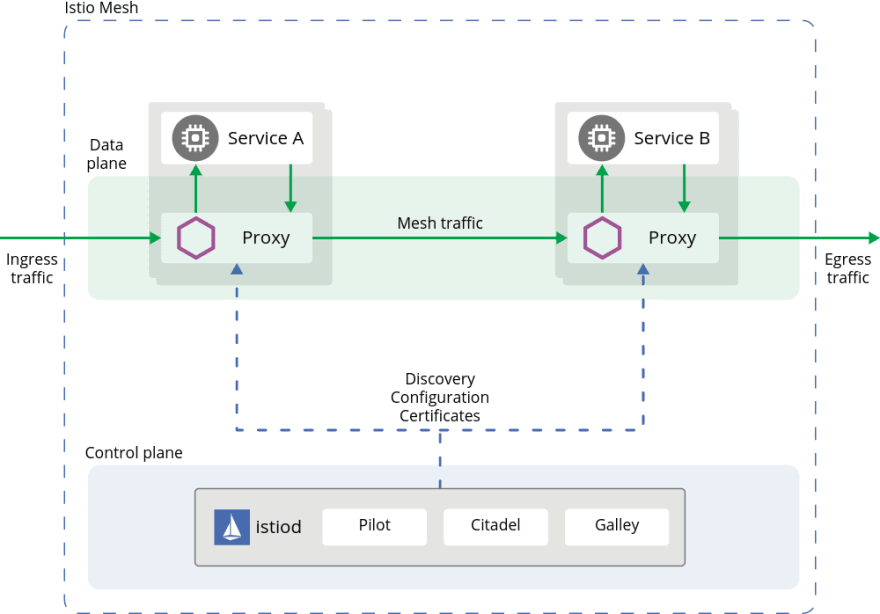 Since the Istio version 1.9.1 they all, excluding Pilot, which is running in a dedicated Docker container, are built as a single binary file called istiod, plus additional Ingress and Egress Controllers.

Consist of sidecar containers running as additional processes which are running in Kubernetes via kube-inject, see the Installing the Sidecar.

These containers and Envoy proxy instances allow to:

Before going to run our Istio — let’s take a brief overview of the resources used to manage traffic.

“Behind” an Ingress Gateway is another resource is created — the Gateway, which is also described as Kubernetes CRD during installation and used to describe hosts and ports used to send traffic with this Gateway.

Then, another resource is going to the scene — the VirtualService, which describes traffic routing sent over a Gateway and sends it to Kubernetes Services, as it’s described in the Destination rules.

Ingress Gateway consists of two parts: a Kubernetes Pod with Envoy instance which controls traffic, and a Kubernetes Ingress, which accepts new connections.

In its turn Gateway and VirtualService configures Envoy proxy instance used as the Ingress Gateway controller.

So, in general, traffic flow is the following:

Istio supports different Deployment models. In this current case, we are using one AWS Elastic Kubernetes Service cluster, and all pods are running in the same VPC network.

Also, there are different Config Profiles which has pre-configured components set to be installed. Here, we can be interested in the default — install istiod and istio-ingressgateway, demo - similar, but also will install the istio-egressgateway service, and preview - to investigate new abilities that are not yet included in the main Istion release.

You can install Istio in various ways: using the istioctl utility and by using manifest files, using Helm, or with Ansible.

Worth paying attention to the Mutual TLS (mTLS) — see the Permissive mode. In short: by default, Istion is installed in the Permissive mTLS mode, which allows existing applications to communicate using plaintext traffic. But all new connections via Envoy proxies will be made with TLS encryption.

For now, let’s install Istio manually with istioctl, and later on the Dev and Production clusters will install with Ansible and its helm module.

istioctl uses the ~/.kube/config file or you can specify your own by using the --kubeconfig option, or set another context with --context.

The istioctl file located in the bin directory - add it to the $PATH variable (Linux/macOS:

Generate a kubeconfig for the testing cluster, if need (if using Minicube, it will be generated automatically):

And install Istio with the _default _profile:

We will not use the default Bookinfo from the Istio Gettings Started guide, instead let’s define our own Namespace, a Deployment with one pod with NGINX, and a Service — I’d like to emulate already existing applications that need to be migrated under Istio control.

Also, at this moment we will not configure automated sidecars injection — will go back to this later.

It’s recommended to use the version label in applications, as later this will allow implementing canary and blue-green deployment, see the How To Do Canary Deployments With Istio and Kubernetes и Traffic Management.

Check containers in the pod that we created:

Okay, one pod as it was described in the Deployment above.

And check if our application is working:

Nice — here is everything working.

So, at this moment we have an Istio Ingress Gateway created during Istio installation, which is represented by an AWS Classic LoadBalancer:

But if try to access it right now, we will get an error as it has no idea where to route traffic to:

To configure it — need to add an Istio Gateway.

The Gateway describes Istio Ingress Gateway config — which ports to use and which traffic to accept. Also, here you can perform SSL termination (but in this case, this is done by an AWS LoadBalancer).

Add a new resource to our test-istio.yaml - the Gateway:

In the spec.selector.istio we are specifying the Istio Ingress Gateway, for which this manifest will be applied to.

Pay attention, that our application is living in a dedicated namespace, so Gateway and VirtualService (see below) need to be created in the same Namespace.

Next, we are going to add a VirtualService where we will describe our “backend” where traffic will be sent.

As a “backend” here is just a common Kubernetes Service of our application — the test-svc:

Describe a VirtualService in the same namespace where our application and where we’ve created the Gateway above:

And check again the URL of the LoadBalancer of the Istio Ingress Gateway:

And still, we are working without Envoy proxy aka sidecar in our application’s Pod:

Will check a bit later why this is working.

Istio has a lot of addons: Prometheus for metrics collection and alerting, Grafana for metrics visualization, Jaeger for requests tracing, and Kiali to build a map of network and services. Read more at Integrations.

And execute istioctl dashboard kiali - Kiali will be opened in a default browser:

But, if navigate to the Applications, we will see that our application marked as “Missing Sidecar”:

And no services map the Graph:

As we remember, our pod has no container with Envoy instance although the network is working, because at this moment Istio via iptables rules sends traffic directly to the container with NGINX. Read more at Traffic flow from application container to sidecar proxy.

Iptalbes rules are configured with an additional InitContainer  —  istio-init - when a pod is started, but at this moment they are default, configured with kube-proxy during our application deployment. Check the Kubernetes: Service, load balancing, kube-proxy, and iptables post for more details.

In the following post we will dive deeper into the Istio networking, and for now, let’s just add sidecars injection to our Namespace’s Pods and compare Iptables rules before and after.

Go to check Iptables rules before we will add a sidecar and istio-init.

Connect via SSH to a Kubernetes WorkerNode where your Pod is living and find NGINX Docker container:

Find a PID of the process in this container:

Using the nsenter utility check Ipables rules on the network-namespace of the process with PID 31548 - nothing unusual here, for now - all traffic is just sent directly to our container:

To automatically inject Envoy proxy instances to pods in the test-namespace namespace run the following:

But sidecars will be added only for new pods in this namespace.

We can add them manually by using the kube-inject, or just by recreating the pod:

Check containers in the Pod again:

Now we can see the istio-proxy container - this is pour sidecar container with Envoy.

Also, check initContainers of the Pod:

And check Iptables rules again — find the container, its PID, and check the rules:

Now we can see additional Iptables chains and rules created by Isio, which sends traffic to the Envoy sidecar container and then to the application’s container and back.

Go back to the Kiali dashboard and check the map: 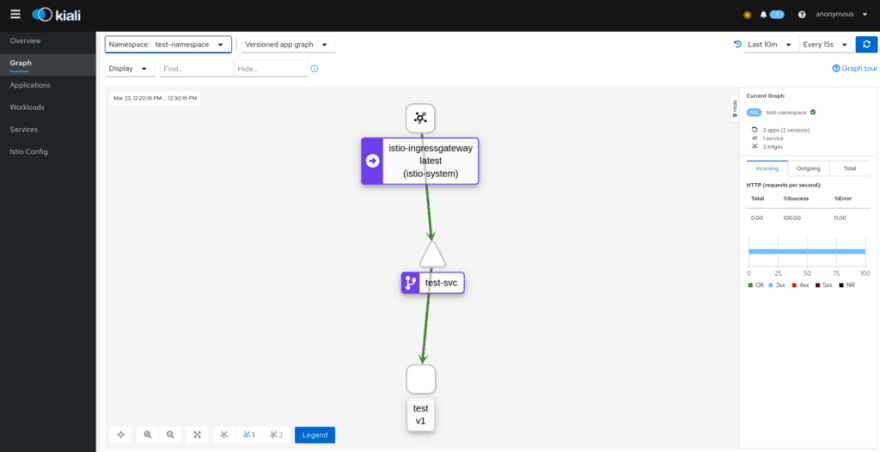 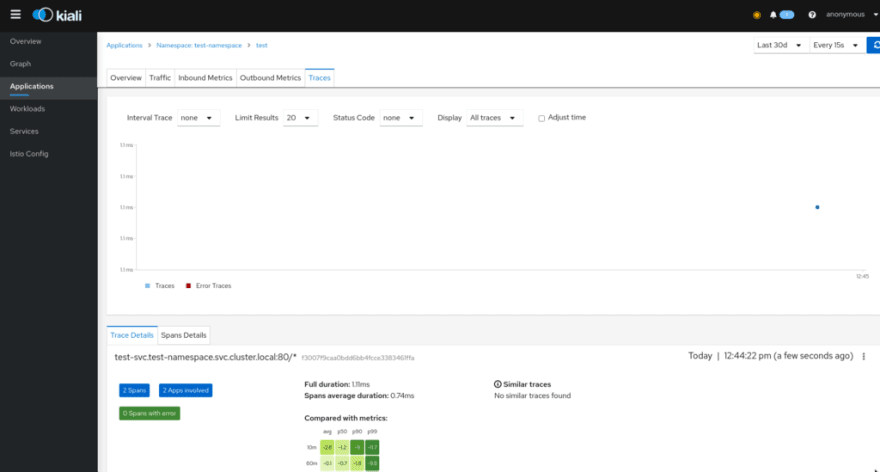 Traces are also available via the Jaeger dashboard which can be accessed with istioctl dashboard jaeger:

Also, with istioctl dashboard prometheus you can open Prometheus and check available metrics, see more at Querying Metrics from Prometheus:

Actually, that’s all for now.

Later, we will integrate Istio with AWS Application LoadBalncer, deploy and configuration of an Isitio instance to the AWS Elastic Kubernetes Service with Ansible and Helm, Gateway, and VirtualServices configuration and debugging.

Newbie in the fire