Github Actions actually is very similar to the TravisCI, but have much more closer integration with Github, and even its interface is included in the Github WebUI:

So, let’s take a closer look at its abilities, how to use it, and in the following posts will deploy its self-hosted runners to a Kubernetes cluster and will build a CI/CD pipeline to deploy applications using Github Actions and ArgoCD.

GitHub Actions is free for all account types but with some limitations:

For example, our project uses GitHub Team, thus we can have 2 gigabytes and 3000 minutes per month.

With this, minutes are different for Linux, macOS, and Windows:

I.e. from our 3000 total, we can use only 300 minutes if we’re using macOS agents and every additional minute will cost additional money:

Also, Github Actions can be working in Github Cloud, and as self-hosted runners, which can solve an issue with access to your secured resources because Github haven’t static IP ranges, so you’re not able to configure your SecurityGroup/firewalls.

Github suggests periodically download a json-file with updated networks (btw, Github Actions is working on Microsoft Azure), but I’m too lazy to create some additional automation to update the security configuration.

In the Actions, build flow is the following (see Introduction to GitHub Actions):

The main components are:

In short, let’s see how a workflow file is built:

Let’s start with a simple file to see how it works.

In your repository root create a directory called .github/workflows/ - here we will store all workflows, that can be trigger with different events:

In this directory, create a file for your flow, for example, named as .github/workflows/actions-test.yaml:

Save it and push to Github:

Go to the Github WebUI, switch to the Actions tab, you’ll see this workflow execution: 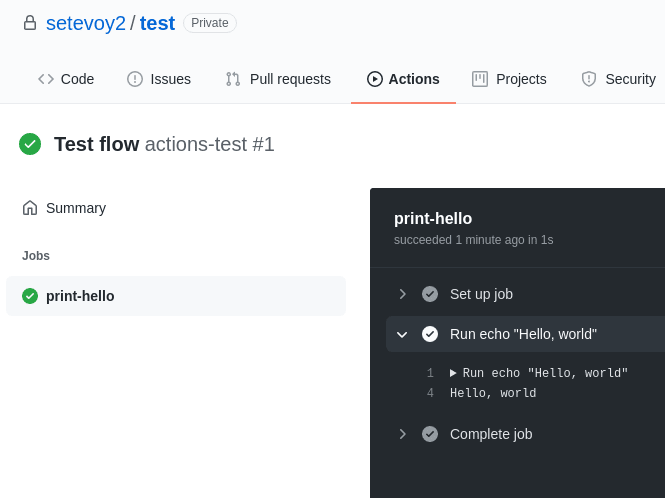 In Events, you can describe conditions to run that flow.

Such a condition can be a pull request or commit to a repository, a schedule, or some event outside of Github that will run a webhook to your repository.

Also, you can configure those conditions for different branches of the repository:

Or use a cronjob, see the Scheduled events:

Also, you can configure an ability to execute a workflow manually by using the workflow_dispatch in the on:

And after this, in the Actions you’ll get a button to run that flow:

In your workflow, you also can add some inputs that will be available as variables in steps via the github.event context:

Here, in the ${{ github.event.inputs.username }} we are getting a value of the workflow_dispatch.inputs.userName, and in the github.actor receiving the Github Actions metadata : 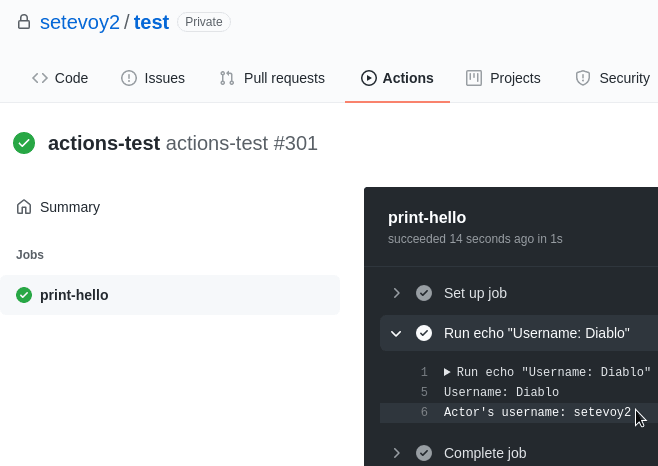 A use case can be, for example, to pass a Docker image tag to deploy with ArgoCD.

Beside of the push which we've used above we can configure our workflow on any other event in a repository.

As another example let’s configure our flow to be running when a new branch or tag is created by using the create:

Here the ${{ github.event_name }} is used to display the trigger name.

Create a new branch and push it: 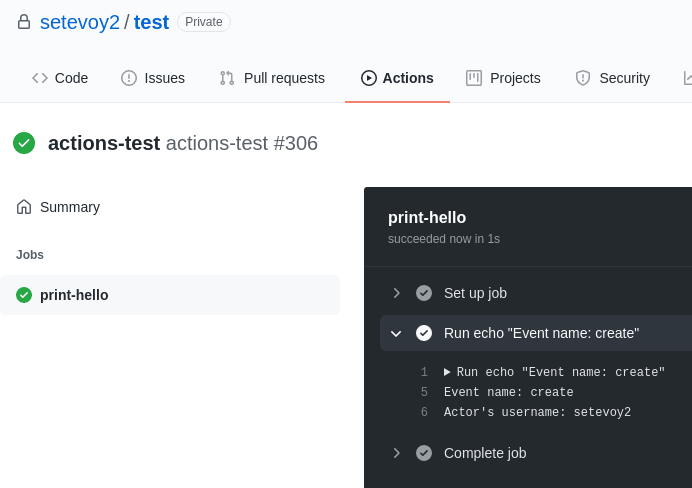 There is a list of the default variables, see the Default environment variables, and you can create your own on a workflow level, jobs level, per a job, or per a step.

During this, pay attention that you access variables in different ways, see the About environment variables:

A secret can be added in a repository Settings > Secrets: 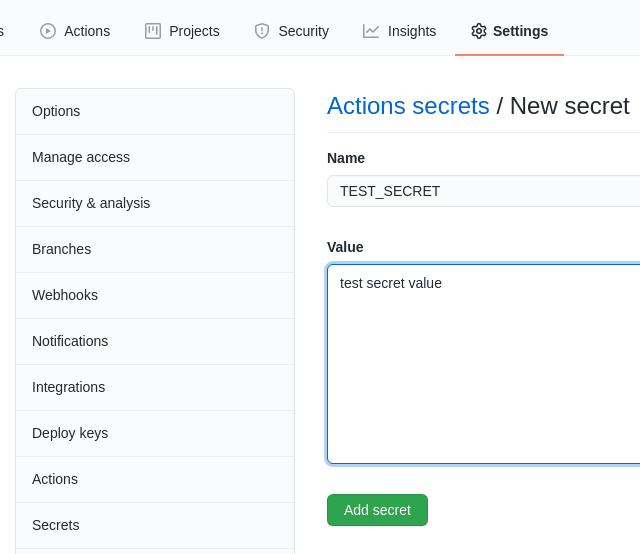 Now, add its use in a workflow. A secret can be cases directly via the ${{ secret.SECRETNAME }} or can be set to a variable: 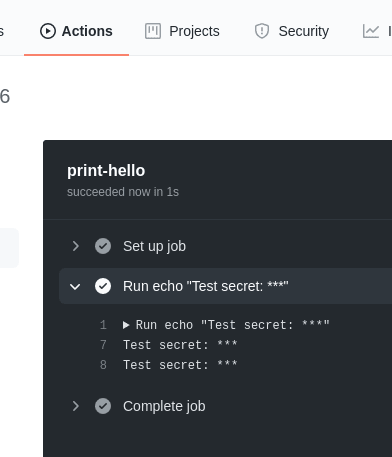 Github Actions supports a conditions check for jobs by using the if operator followed by an expression, see the About contexts and expressions.

Here, we are using the github context, the contains() function, != and && operators, and steps context to check the condition. 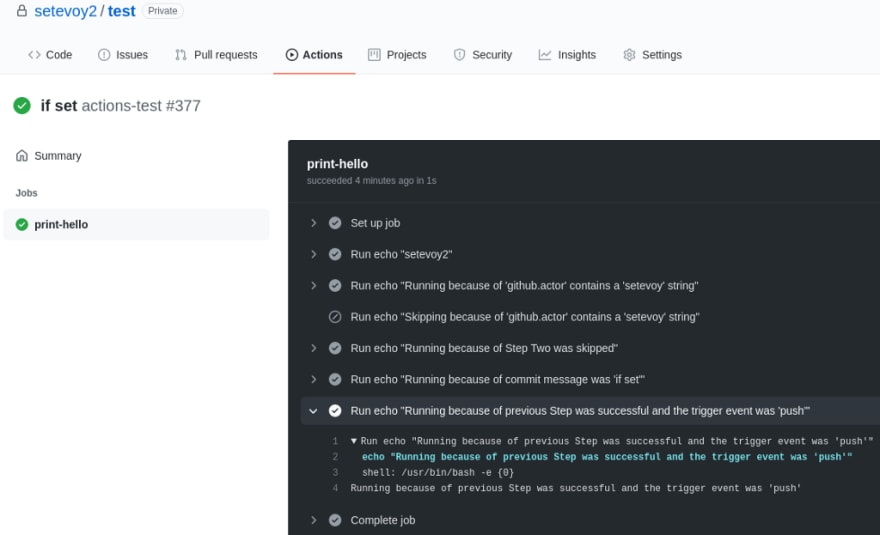 Beside of the if: success() in steps, you can add jobs dependency on each other by using the needs:

And the last thing to take a look at is the main component of the Github Actions — the Actions.

Actions allows us to use already existing scripts and utilities from the Github Actions Marketplace, or Docker images from the Docker Hub.

See the Finding and customizing actions.

In the example below, we will use the actions/checkout@v2 to clone a repository roo a runner-agent, and omegion/argocd-app-actions to synchronize an ArgoCD application (see the ArgoCD: an overview, SSL configuration, and an application deploy post for details).

Update the argocd-cm ConfigMap, as by default the admin user have no permissions to use ArgoCD tokens (do not do this on Production!:

Add a Secret with this token: 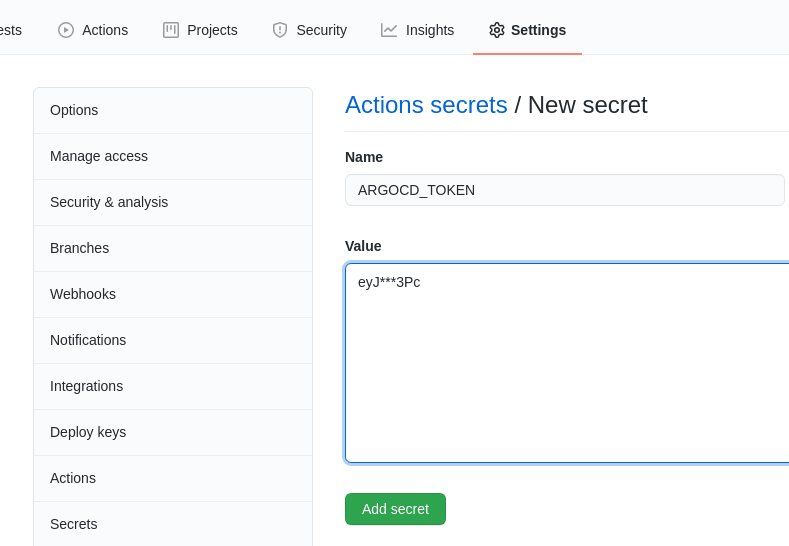 Push it to a repository, and check its execution: 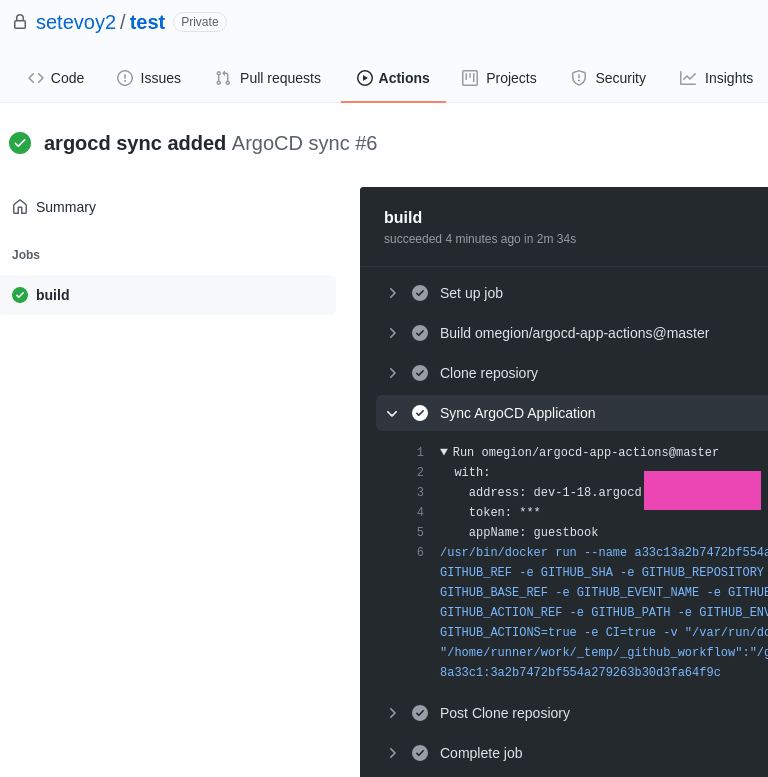 And the application in ArgoCD now is synchronized:

How to Use MQTT in Java