We will hold off on building a model until the forthcoming sections as training a model is more involved and we would also have to learn a few more components before we train it. In the next section, we will learn about non-max suppression, which helps in shortlisting from the different possible predicted bounding boxes around an object when inferring using the trained model on a new image. 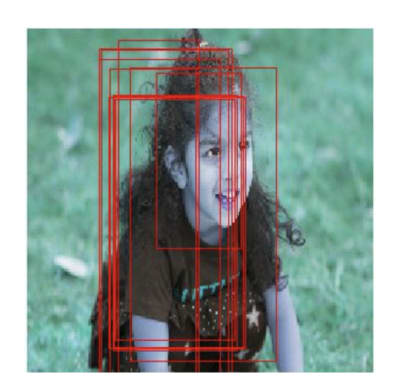 mAP comes to the rescue in such a scenario. Before we try to understand mAP, let's first understand precision, then average precision, and finally, mAP:

So far, we have learned about preparing a training dataset for our model, performing non-max suppression on the model's predictions, and calculating its accuracies. In the following sections, we will learn about training a model (R-CNN-based and Fast R-CNN-based) to detect objects in new images.

In the following sections, we will learn about the working details of R-CNN before training it on our custom dataset.

Let's get an idea of R-CNN-based object detection at a high level using the following diagram:

We perform the following steps when leveraging the R-CNN technique for object detection:

A sample as a result of creating a bounding box offset and a ground truth class for a region proposal is as follows: 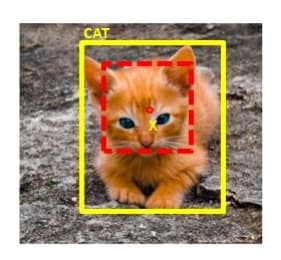 Note that the loss function that we will minimize differs from the loss function that is optimized in the original paper. We are doing this to reduce the complexity associated with building R-CNN and Fast R-CNN from scratch. Once the reader is familiar with how the model works and can build a model using the following code, we highly encourage them to implement the original paper from scratch.

Implementing R-CNN for object detection on a custom dataset

We will download the data from the Google Open Images v6 dataset. In code, we will work on only those images that are of a bus or a truck to ensure that we can train the images (as you will shortly notice the memory issues associated with using selectivesearch).

By now, we have defined all the functions necessary to prepare data and initialize data loaders. In the next section, we will fetch region proposals (input regions to the model) and the ground truth of the bounding box offset along with the class of object (expected output).

Fetching region proposals and the ground truth of offset

In this section, we will learn about building a model that can predict both the class of region proposal and the offset corresponding to it in order to draw a tight bounding box around the object in the image.

Predict on a new image

In this section, we will leverage the model trained so far to predict and draw bounding boxes around objects and the corresponding class of object within the predicted bounding box in new images.

Parse Name and Address: Regex vs NER, with Code Examples