This article is originally from the book "Computer Vision with PyTorch"

In the previous chapter, we learned about R-CNN and Fast R-CNN techniques, which leveraged region proposals to generate predictions of the locations of objects in an image along with the classes corresponding to objects in the image. Furthermore, we learned about the bottleneck of the speed of inference, which happens because of having two different models-one for region proposal generation and another for object detection. In this chapter, we will learn about different modern techniques, such as Faster R-CNN, YOLO, and Single-Shot Detector (SSD), that overcomes slow inference time by employing a single model to make predictions for both the class of objects and the bounding box in a single shot. We will start by learning about anchor boxes and then proceed to learn about how each of the techniques works and how to implement them to detect objects in an image.

The drawback of the R-CNN and Fast R-CNN techniques is that they have two disjointed networks-one to identify the regions that likely contain an object and the other to make corrections to the bounding box where an object is identified. Furthermore, both the models require as many forward propagations as there are region proposals. Modern object detection algorithms focus heavily on training a single neural network and have the capability to detect all objects in one forward pass. In the subsequent sections, we will learn about the various components of a typical modern object detection algorithm:

Furthermore, in some images, the objects of interest might be scaled-resulting in a much smaller or much greater height and width than average-while still maintaining the aspect ratio (that is, widthheight​ ).

Once we have a decent idea of the aspect ratio and the height and width of objects (which can be obtained from ground truth values in the dataset) present in our images, we define the anchor boxes with heights and widths representing the majority of objects' bounding boxes within our dataset.

Typically, this is obtained by employing K-means clustering on top of the ground truth bounding boxes of objects present in images.

Now that we understand how anchor boxes' heights and widths are obtained, we will learn about how to leverage them in the process:

We slide the two anchor boxes over the image and note the locations where the IoU of the anchor box with the ground truth is the highest and denote that this particular location contains an object while the rest of the locations do not contain an object. 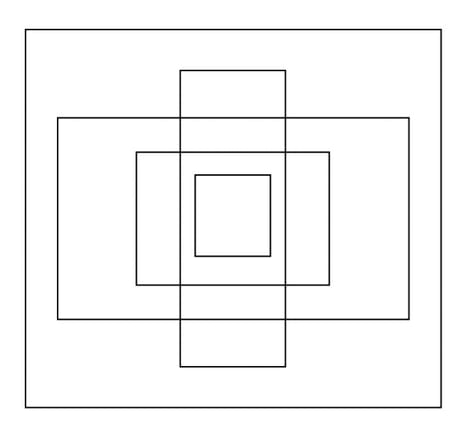 Note that all the anchor boxes have the same center but different aspect ratios or scales.

Now that we understand anchor boxes, in the next section, we will learn about the RPN, which leverages anchor boxes to come up with predictions of regions that are likely to contain an object.

Imagine a scenario where we have a 224x224x3 image. Furthermore, let's say that the anchor box is of shape 8x8 for this example. If we have a stride of 8 pixels, we are fetching 224/8 = 28 crops of a picture for every row-essentially 28×28=576 crops from a picture. We then take each of these crops and pass through a Region Proposal Network (RPN) model that indicates whether the crop contains an image. Essentially, an RPN suggests the likelihood of a crop containing an object.

While region proposal generation based on selectivesearch is done outside of the neural network, we can build an RPN that is part of the object detection network. Using an RPN, we are now in a position where we don't have to perform unnecessary computations to calculate region proposals outside of the network. This way, we have a single model to identify regions, identify classes of objects in image, and identify their corresponding bounding box locations.

Once we train a model to predict if the region candidate contains an object, we then perform non-max suppression, as multiple overlapping regions can contain an object.

In summary, an RPN trains a model to enable it to identify region proposals with a high likelihood of containing an object by performing the following steps:

So far, we have learned about the following steps in order to identify objects and perform offsets to bounding boxes:

Two issues with these steps are as follows:

We address these two issues in this section, where we take the uniformly shape feature map obtained previously and pass it through a network. We expect the network to predict the class of the object contained within the region and also the offsets corresponding to the region to ensure that the bounding box is as tight as possible around the object in the image.

Let's understand this through the following diagram:

In the preceding diagram, we are taking the output of RoI pooling as input (the 7x7x5x12 shape), flattening it, and connecting to a dense layer before predicting two aspects:

Hence, if there are 20 classes in the data, the output of the neural network contains a total of 25 outputs-21 classes (including the background class) and the 4 offsets to be applied to the height, width, and two center coordinates of the bounding box.

Now that we have learned the different components of an object detection pipeline, let's summarize it with the following diagram:

You Only Look Once (YOLO) and its variants are one of the prominent object detection algorithms. In this section, we will understand at a high level how YOLO works and the potential limitations of R-CNN-based object detection frameworks that YOLO overcomes.

First, let's learn about the possible limitations of R-CNN-based detection algorithms. In Faster R-CNN, we slide over the image using anchor boxes and identify the regions that are likely to contain an object, and then we make the bounding box corrections. However, in the fully connected layer, where only the detected region's RoI pooling output is passed as input, in the case of regions that do not fully encompass the object (where the object is beyond the boundaries of the bounding box of region proposal), the network has to guess the real boundaries of object, as it has not seen the full image (but has seen only the region proposal).

YOLO comes in handy in such scenarios, as it looks at the whole image while predicting the bounding box corresponding to an image.

Furthermore, Faster R-CNN is still slow, as we have two networks: the RPN and the final network that predicts classes and bounding boxes around objects.

Here, we will understand how YOLO overcomes the limitations of Faster R-CNN, both by looking at the whole image at once as well as by having a single network to make predictions.

We will look at how data is prepared for YOLO through the following example:

Let's understand how to calculate bx, by, bw and bh.

First, we consider the grid cell (let's consider the b1 grid cell) as our universe, and normalize it to a scale between 0 and 1, as follows:

So far, we have calculated offsets from the grid cell center to the ground truth center corresponding to the object in the image. Now, let's understand how bw and bh are calculated.

Note that for each cell, we are able to fetch 8 outputs. Hence, for 3x3 grid of cells, we fetch 3x3x8 outputs.

So far, we have been building for a scenario where the expectation is that there is only one object within a grid cell. However, in reality, there can be scenarios where there are multiple objects within the same grid cell. This would result in creating ground truths that are incorrect. Let's understand this phenomenon through the following example image: 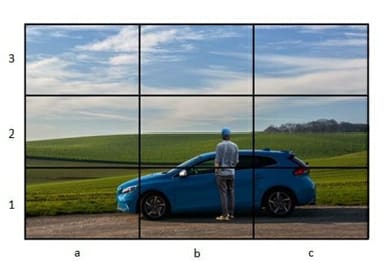 In the preceding example, the mid-point of the ground truth bounding boxes for both the car and the person fall in the same cell-cell b1.

One way to avoid such a scenario is by having a grid that has more rows and columns-for example, a 19x19 grid. However, there can be still a scenario where an increase in the number of grid cells does not help. Anchor boxes come in handy in such a scenario. Let's say we have two anchor boxes-one that has a greater height than width (corresponding to the person) and another that has a greater width than height (corresponding to the car): 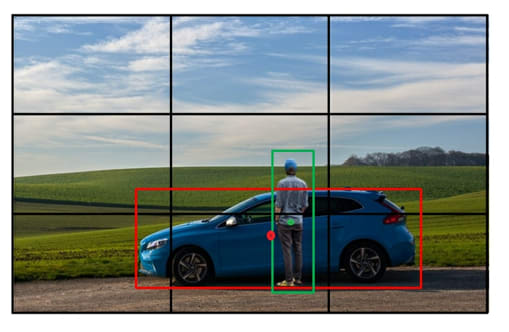 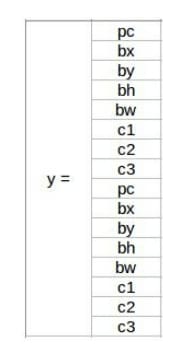 Here, bx, by, bw and bh represent the offset from the anchor box (which is the universe in this scenario as seen in the image instead of the grid cell).

When calculating the loss associated with the model, we need to ensure that we do not calculate the regression loss and classification loss when the objectness score is less than a certain threshold (this corresponds to the cells that do not contain an object).

Next, if the cell contains an object, we need to ensure that the classification across different classes is as accurate as possible.

Calculate the loss of localization and classification as follows:

Here, we observe the following:

The overall loss is a sum of classification and regression loss values.

So far, we have seen a scenario where we made predictions after gradually convolving and pooling the output from the previous layer. However, we know that different layers have different receptive fields to the original image. For example, the initial layers have a smaller receptive field when compared to the final layers, which have a larger receptive field. Here, we will learn how SSD leverages this phenomenon to come up with a prediction of bounding boxes for images.

The workings behind how SSD helps overcome the issue of detecting objects with different scales is as follows:

Now that we understand the main ways in which SSD differs from YOLO (which is that default boxes in SSD replace anchor boxes in YOLO and multiple layers are connected to the final layer in SSD, instead of gradual convolution pooling in YOLO), let's learn about the following: