Declarative programming is a paradigm describing WHAT the program does, without explicitly specifying its control flow.

Imperative programming is a paradigm describing HOW the program should do something by explicitly specifying each instruction (or statement) step by step, which mutate the program's state.

This "what vs how" is often used to compare both of these approaches because... Well, it is actually a good way to describe them.

At some point, the state of the program must be changed in order for things to happen, and these changes can only occur with instructions moving data from one location (cache, memory, hard drive...) to another. But we are not here to talk about low-level programming, so let's focus on high-level languages instead.

The transformation from declarative to "imperative code" is generally made by engines, interpreters, or compilers.

For example, SQL is a declarative language. When using the SELECT * FROM users WHERE id <= 100 query, we are expressing (or declaring) what we want: the first 100 users ever registered in the database. The way how these rows are retrieved is completely delegated to the SQL engine: can it use an index to accelerate the query? Should/Can it use multiple CPU cores to finish earlier?

From a developer's point of view, we have no idea how these data are actually retrieved. And we don't really care, unless we are investigating some performance issues. All we care about is telling the program what data we want to retrieve, and not how to do it. The engine/compiler is smart enough to find the most optimal way to do that anyway.

For languages that use a declarative paradigm (e.g. Haskell, SQL), this "underlying imperative world" is abstracted/hidden to the developers. It is something we don't have to worry about.

For languages that are multi-paradigms (e.g. JavaScript, Scala), there is still the possibility to write imperative code. This allows us to write declarative code based on imperative code that we wrote ourselves. This can be useful to support FP features that are not built-into the language for example, or just to make the code more "declarative", which makes it more readable and understandable, in my opinion.

Let's take an example from the real world: we would like to make a chocolate cake. How would that look like with these 2 paradigms?

In the imperative way, we are told what to do, and more importantly how to do it: use a large bowl, mix with a paddle, mix at medium speed, use a large pan, distribute batter evenly, remove pan with a pot holder, use the tapping method, frost evenly.

These details are great when actually making a cake, especially as a beginner. But when describing how to make one, on a "higher level" of abstraction, we don't need all these information.

Furthermore, we are actually doing something at each step, i.e. we are changing the world around us, step by step. If we choose to stop at an intermediate step, then we basically "wasted" all the tools and ingredients from the previous steps.

In the declarative way, we are told what we will have to do to make the cake. Nothing actually happens until the last step, i.e. the world doesn't change until we have reached the 7th step.

In other words, we are preparing all the steps in advance, then at the very end, we are doing what was described. How do we perform the actions described in these steps though? It's abstracted: all the "how" parts are provided as later as possible, between the "Ready?" and "Go!", either by the developer (for multi-paradigms languages) or by the engine/compiler. For example, this is where the binding between "remove the pan from the oven" and "using a pot holder" is done. We could also bind it to "using the pan handle", without changing the definition of the 5th step.

Let's say we want to double every value of a given list of numbers. There are plenty of ways to iterate over a list and transform each of its elements in JavaScript:

To demonstrate that imperative code can be abstracted by declarative code, we could use a for loop and hide it inside a transformEachElement function:

But we could use map directly as it's already declarative, and widely known for this type of use case:

Here is another example, where we want to target the text from an element of a web page. This element's location is a few levels down in the elements hierarchy (called the DOM tree). The twist is that each of these elements may not exist in practice. 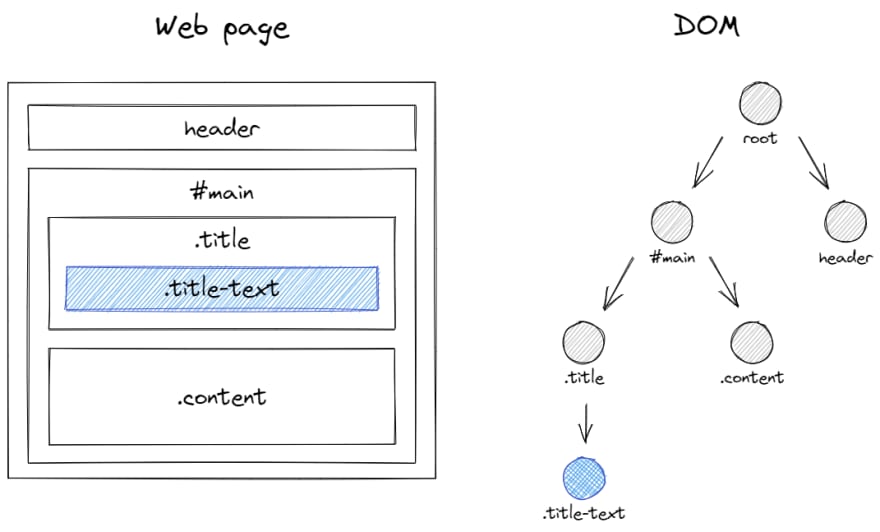 So, each time we progress by one node in the tree, we have to check if the next node is available or not.

This is pretty verbose, and the more depth there is to reach an element, the bigger the pyramid of doom gets.

Additionally, we have leaked an implementation detail: a node that doesn't exist has the value null. It could have been undefined, or 'nothing', or something else entirely. The point is that we have to understand that null is the magic value expressing the absence of an element in the tree here. It should not be necessary to know that to understand what this function does.

Here is a more declarative approach:

In this second version, all we care about is accessing an element in the tree, where each intermediate element could be missing. In other words, we have written "what" to do in order to access the element containing the text we are looking for.

This supposes that we have access to some Option data structure in our code base. There are plenty of articles available on the Internet that talk about this Option (also known as Maybe) data type. Essentially, it allows us to express the possible absence of a value, transform it if the value is available, and combine it with other possible missing values, all that in a declarative way.

In fact, this data type is so useful that some languages already provide it in their standard library (e.g. Scala, Haskell, F#), even the more mature ones (e.g. Optional in Java, C++).

The flatMap and map terms may seem "mystical" at this point. We will talk about them by the end of this series, in the article about algebraic data structures and type classes. In functional programs, you will often encounter these functions or their equivalent, depending on the language:

A couple of years ago (Dec. 2019), the optional operator proposal reached stage 4 in the EcmaScript specification, used for both JavaScript and TypeScript. This allows us to greatly simplify the code from above, without relying on any library:

This still "leaks" the fact that either null or undefined values should be used to mark an element as missing, but it is still way more expressive than the first imperative version from earlier.

When to use declarative code

This section applies only to muli-paradigms languages. Obviously, if you are using a functional language such as Haskell, you are always using declarative code.

So, it is possible to make imperative code look like declarative code, to some extent. In such case, I would suggest isolating the imperative parts from the rest of the code base, to make sure developers use the "declarative" functions instead.

In multi-paradigms languages, the scale between declarative and imperative is not a clear black/white separation, but rather multiple shades of grey. It is up to us to determine which shade is the best for our projects and teams.

Here is a non-exhaustive list of pros and cons for each of these approaches, based on my experience:

Since code is destined to be read and understood by human beings, I think it is a good practice to use more declarative programming in our softwares.

Sometimes, performance is critical and requires the use of imperative programming (we are talking about multi-paradigms languages here). In such cases, comments and documentation are crucial to understand the code base. Otherwise, some exceptions put aside, code should be self-explanatory through good naming and declarative steps, and should not require comments to understand it well.

For strictly-declarative languages such as Haskell and SQL, the compiler/engine makes the best optimizations possible; so there is no need (and no way anyway) to write imperative code to improve performance.

In this article, I tried to illustrate (with some examples) the difference between these 2 approaches, and the advantages of the declarative way. The biggest benefit is making the code more readable and understandable.

Misunderstanding the responsibility of some part of the code base is one of the most common reasons why bugs are introduced in the first place. It is also one of the reasons why adding improvements and features takes more time, as we need to first understand what the code does before making any changes.

Functional Programming is about expressing "what" we want to do with data, but not actually doing anything until the very last moment. Doing something requires changing state and running statements. These parts are handled by engines/interpreters/compilers, since they know "how" to efficiently do "what" we wrote in the code base.

It is not a requirement to fully understand this way of writing code, because it will come naturally the more functional code you write. By going through the articles of this series, you will see that declarative programming is ubiquitous, despite not being mentioned explicitly.

Thank you for reading this far! As always, feel free to leave a comment if need be. The next article will talk about pure functions and referential transparency. See you there!

Special thanks to Tristan Sallé for reviewing the draft of this article.

Pictures made with Excalidraw.