The use of computer systems becomes increasingly present and essential in society. From everyday tasks - such as ordering meals on the phone - to performing imaging exams, software is used. To maintain this growing demand, it is necessary to produce and maintain software within appropriate costs, aiming at its growth and optimization without compromising what has already been developed.

The changes that occur during software development are inevitable, and a good architecture aims to reduce the time to execute these changes, which consequently reduces financial costs and effort. An architecture must, in addition to meeting the immediate demands of users, developers and owners, also meet these expectations over time (MARTIN, 2017).

An architecture must not only meet the demands of users, developers, and owners at a given time, but also meet those expectations over time. Robert MARTIN (2017) proposed Clean Architecture with the aim of promoting the implementation of cohesive systems, independent of technology and favoring code reusability. Next, we'll look at this architecture in more detail.

In the clean architecture, it is not necessary to choose the database or framework at the beginning of the development, as all these are details that do not interfere with the policies and, consequently, can be changed over time.

In Clean Architecture there is a well-defined division of layers. The architecture is framework-independent, i.e., the internal layers that contain the business rules do not depend on any third-party library, which allows the developer to use a framework as a tool and not adapt the system to meet the specifications of a particular technology. Other benefits of Clean Architecture are: testability, UI independence, database independence and independence from any external agents (business rules should not know anything about the interfaces of the external world).

To illustrate all these concepts, the diagram shown in the figure below was created. 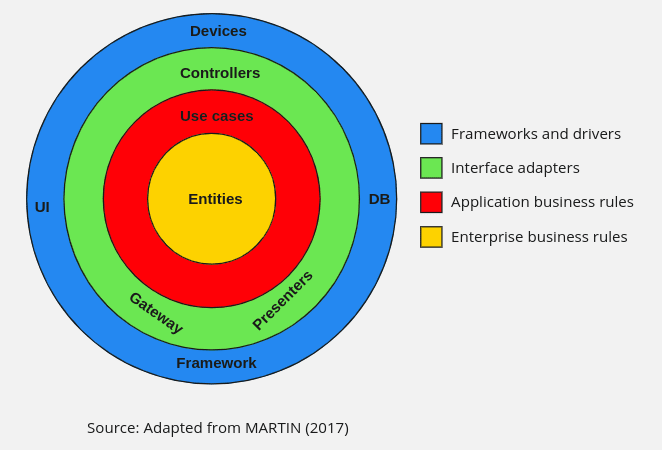 Each layer in the figure represents a different area of the software, the innermost part being the policies and the outermost the mechanisms.

The main rule for Clean Architecture is the Dependency Rule, which says that the dependencies of a source code can only point inwards, that is, in the direction of the highest level policies. That said, we can say that elements of an innermost layer cannot have any information about elements of an outermost layer. Classes, functions, variables, data format, or any entity declared in an outer layer must not be mentioned by the code of an inner layer.

The innermost layer is the Entities layer, which contains the application's business objectives, containing the most general and highest level rules. An entity can be a set of data structures and functions or an object with methods, as long as that entity can be used by multiple applications. This layer must not be altered by changes in the outermost layers, that is, no operational changes in any application should influence this layer.

The use case layer contains the application-specific business rules, grouping and implementing all the use cases of the system. Use cases organize the flow of data to and from entities and guide entities in applying crucial business rules to achieve use case goals. This layer should also not be affected by the outermost layers, and your changes should not affect the entities layer. However, if the details of a use case change, some of the code in that layer will be affected.

The interface adapters layer has a set of adapters that convert the data to the most convenient format for the layers around it. In other words, it takes data from a database, for example, and converts it to the most convenient format for the entity layers and use cases. The reverse path of conversion can also be done, from the data from the innermost layers to the outermost layers. Presenters, views, and controllers belong to this layer.

The outermost layer of the diagram is usually made up of frameworks and databases. This layer contains the code that establishes communication with the interface adapters layer. All the details are in this layer, the web is a detail, the database is a detail. All these elements are located in the outermost layer to avoid the risk of interfering with the others (MARTIN, 2017).

But if the layers are so independent, how do they communicate? This contradiction is resolved with the Dependency Inversion Principle. Robert C. MARTIN (2017) explains that you can organize the interfaces and inheritance relationships so that the source code dependencies are opposite the control flow at the right points.

If a use case needs to communicate with the presenter, this call cannot be straightforward as it would violate the Dependency Rule, so the use case calls an interface from the inner layer and the presenter in the outer circle does the implementation. This technique can be used between all layers of the architecture. The data that travels between the layers can be basic structures or simple data transfer objects, these data being just arguments for function calls. Entities or records from the databases must not be transmitted in order not to violate the Dependency Rule.

Once the application base has been created, Clean Architecture helps to maintain and evolve the application without requiring much cost (either physical or time). This help is provided by the fact that its layers are independent and by the constant use of design patterns. Thus, changes to a certain part of the system tend not to interfere with the operation of the rest of the application.

On the other hand, a more experienced team of developers is needed to work on the system. It takes knowledge of design patterns to be able to maintain and structure the software. It also takes longer than a simple MVP application to see the first results, so it's important to have strong client alignment to make the future benefits clear.

Finally, it is concluded that for applications that tend to grow and remain for many years, the Clean Architecture approach is a good solution to use. However, for simple and non-evolving systems, it may not be worth the effort with such an architecture, being wiser to follow simpler architectural patterns.

From HTML to Simple Form: anatomy of Rails forms

Interaction to Next Paint