Given a string s, return the longest palindromic substring in s. 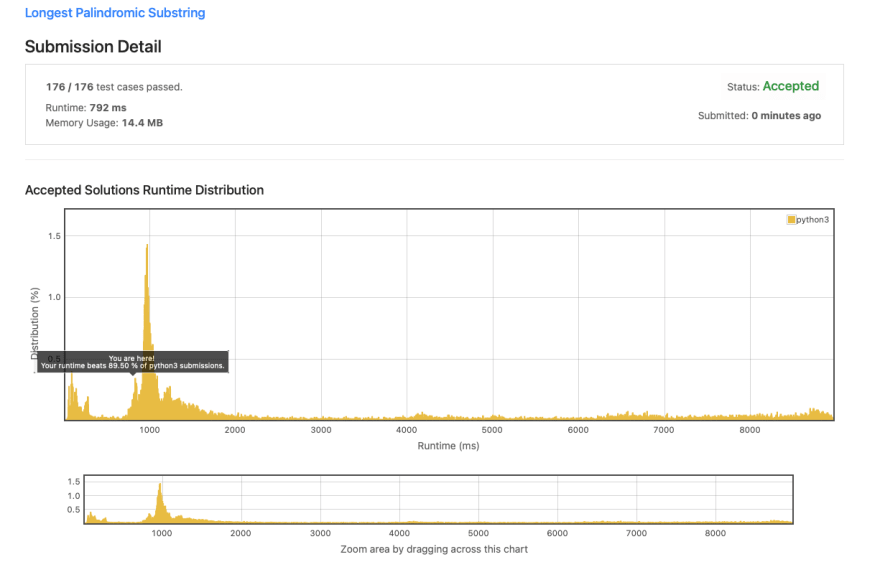 Hopefully the comments in the code explain the solution well enough. I felt there were 2 ways to possibly do it. One is to check palindromes outside in. The other is inside out. Inside out was more intuitive to me. It was also easier to code and seems to perform well.

One bit that caught me for a while which might be worth talking about.

Initially I had dist = self.scan(s, n, i, i). I struggled for a while trying to figure out why it worked in some cases and not in others. I turned out to fail when there were 2 letters together in the middle of a palindrome.

Let's replace the variables with the values to see what it looks like:

We get 1 back but obviously it should be 2 since 'bb' is a palindrome.

Why not always just call scan(s, n, i, i + 1)? That won't work for the case where letters are 1 letter in the middle of matching letters like aba.

Create app with Flet on python

Once suspended, ruarfff will not be able to comment or publish posts until their suspension is removed.

Once unsuspended, ruarfff will be able to comment and publish posts again.

Once unpublished, all posts by ruarfff will become hidden and only accessible to themselves.

If ruarfff is not suspended, they can still re-publish their posts from their dashboard.