(Note: I'm moving my posts from my time at Flatiron School from my Github to this platform. This blog entry was first posted on January 22, 2020)

For my Sinatra project I made an app called GameTracker. I’ve been wanting to make an app where I could track my huge backlog of games across platforms for a long time. I wanted to make it so I could track how long a game takes to complete, add a notes section to keep track of completed quests and whatnot, a “What Should I Play Next?” section that would choose my next game based on certain criteria, etc. Unfortunately time didn’t allow for most of the features I wanted but I definitely intend to add them, either as a future curriculum or personal project. 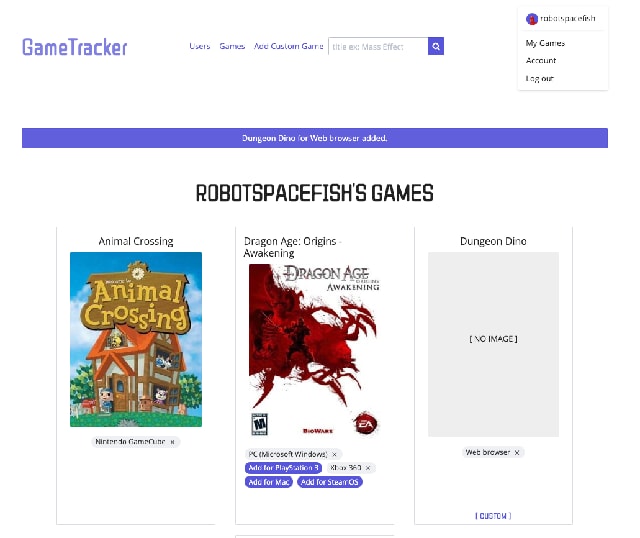 Getting and Storing Information

I seeded the database with 162 platforms, 50 random users (excluding myself), and around 250 games from about 10 game title searches. The users were generated using a gem called random_username for the username and robohash for avatar generation.


To get the games and platforms I used the IGDB API. Each game search uses the API to retrieve information about all games that fit the game title query. Then, I parsed the data using JSON and created objects from that data the way I needed the information in order to add it to my database. From there I checked the database to see if the game already existed. If not, I created the game from the object. If the game had images, I created a GameImage and pushed that into game.game_images. Then, since a game can be on many platforms and platforms can have many games, I had to create a relationship between the game itself and whatever platforms it was on.

For example, if Hollow Knight is available on Nintendo Switch, PC, Mac, and Linux there needs to exist a game_platforms join of game_id and platform_id.

In order to add games to a user I couldn’t just do user.games << game because that wouldn’t tell me which platforms the user owns the game on, and it could be more than one. For example, if I own Hollow Knight on Nintendo Switch and on PC (Windows), I need a relationship between myself, the user, and game_platforms. In order to add Hollow Knight to my games, I had to find the game_platform relationship(s) I wanted:

The relationships used were actually really confusing for me (a big thank you to my cohort lead Chris for helping me set them up) and it took me a while of trying a lot of different things before I got a grasp on it.

The search feature always reaches out to the API before checking the internal database. I made this decision because new games are constantly coming out within the same franchises. So if someone searches for “Resident Evil” but the last search for it was a while ago, there might be a new title coming in the franchise that isn’t stored in the database yet. As mentioned earlier, after game data from the API is parsed and converted to an object that fits my needs, I check the database to see if the game already exists and add it if it doesn’t. After that, I search the internal database so I can retrieve all the results that match the query, including user’s custom games.

I wanted to do the styles from scratch, but I didn't want to spend too long on them, and I also didn't want to use a heavy framework. I ended up choosing something fairly lightweight called Spectre.css. I found the docs a bit lacking and ended up manually tweaking a lot and spending way more time than I initially planned anyway, but I think it looks pretty good and I'm happy with it.