The first installment mainly covered the technical side of things, like the limits and configuration options. This next part looks at how to use all the technical considerations we checked out in part one to effectively design serverless and Lambda systems.

By the end of this post, you should have a good understanding of the key considerations to keep in mind when designing around AWS Lambda. Let’s dive in. If you have checked out Part one, pop over and have a read before getting stuck into part two.

This is an article written for Jefferson Frank, it can be found here or on my blog.

How you handle errors and failures all depends on the use case and the Lambda service that invoked the Lambda.

There are different types of errors that can occur:

Remember—certain errors can’t be caught by the runtime environment. As an example, in NodeJS, if you throw an error inside a promise without using the reject callback, then the whole runtime will crash. It won’t even report the error to CloudWatch Logs or Metrics, it just ends. These must be caught by your code, as most runtimes have events that are emitted on exit and report the exit code and reason before exiting.

When it comes to SQS , a message can be delivered more than once, and if it fails, it’ll be re-queued after the visibility timeout and then retried. When your function has a concurrency of less than five, the AWS polling function will still take messages from the queue and try to invoke your function. This will return a concurrency limit reached exception, and the message will then be marked as being unsuccessful and returned to the queue—this is unofficially called “over-polling.” If you have a DLQ configured on your function, messages might be sent there without being processed, but we’ll say more about this later.

SQS “over-polling”: If the Lambda is being throttled and then messages are sent to the DLQ without being processed.

Then for stream-based services like DynamoDB and Kinesis streams, you have to handle the error within the function or it’ll be retried indefinitely; you can’t use the built-in Lambda DLQs here.

For all other async invocations, if it fails the first invocation, it will retry two or more times. These retries mostly happen within three minutes of each other, but in rare cases it may take up to six hours, and there might also be more than three retries.

Dead Letter Queues (DLQ) to the rescue. Maybe not, DLQs only apply to async invocations; it doesn’t work for services like SQS, DynamoDB streams and Kinesis streams. For SQS use a Redrive Policy on the SQS queue and specify the Dead Letter Queue settings there. It’s important to set the visibility timeout to at least six times the timeout of your function and the maxRecieveCount value to at least five. This helps prevent over-polling, messages being throttled and then being sent to the DLQ when the Lambda concurrency is low.

Alternatively, you could handle all errors in your code with a try-catch-finally block. You get more control over your error handling this way and can send the error to a DLQ yourself.

Now that the events/messages are in the DLQ and the error is fixed, these events have to be replayed so that they’re processed. They need to be taken off the DLQ, and then that event must be sent to the Lambda once again so that it can be processed successfully.

There are different methods to do this and it might not happen often, so a small script to pull the messages and invoke the Lambda will do the trick. Replaying functionality can also be built into the Lambda, so that it knows it if receives a message from the DLQ to extract the original message and run the function. The trigger between the DLQ and the Lambda will always be disabled, but then enabled after the code is fixed and the message can be reprocessed. 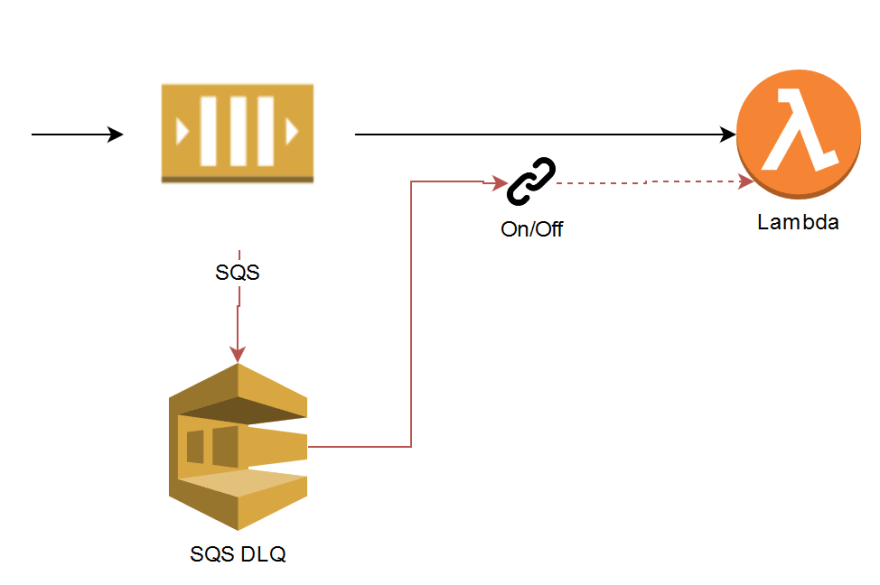 AWS Step Functions also give you granular control over how errors are handled. We can control how many times it needs to be retried, the delay between retries, and the next state.

With all these methods available, it’s crucial that your function is idempotent. Even for something complex like credit card transactions, it can be made idempotent by first checking if the transaction with your stored transaction callback ID has been successful, or if it exists. If it doesn’t, then only carry out the credit deduction.

If you can’t get your functions to be idempotent, consider the Saga pattern. For each action, there must also be a rollback action.

Duplicate messages can be identified by looking at the context.awsRequestId inside the Lambda. It can be used to de-dupe duplicate messages, if a function cannot be idempotent then this should be used. Store this ID in a cache like Redis or a DB to use it in the de-dupe logic; this introduces a new level of complexity to the code, so keep it as a last resort and always try to code your functions to be idempotent.

A Lambda can also look at the context.getRemainingTimeInMillis() function to know how much time is left before the function will end. This is so that if processing takes longer than usual, it can stop, gracefully do some end function logic, and return a soft error to the caller.

Coupling goes beyond Lambda design considerations—it’s more about the system as a whole. Lambdas within a microservice are sometimes tightly coupled, but this is nothing to worry about as long as the data passed between Lambdas within their little black box of a microservice is not over-pure HTTP and isn’t synchronous. Lambdas shouldn’t be directly coupled to one another in a Request Response fashion, but asynchronously. Consider the scenario when an S3 Event invokes a Lambda function, then that Lambda also needs to call another Lambda within that same microservice and so on.

You might be tempted to implement direct coupling, like allowing Lambda 1 to use the AWS SDK to call Lambda 2 and so on. This introduces some of the following problems:

This process can be redesigned to be event driven:

Not only is this the solution to all the problems introduced by the direct coupling method, it also:

Going beyond a single microservice, when events are passed between them both needs to understand and agree upon the structure of the data. Most of the time both microservices can’t be updated at the exact same time, so be sure to version all your events. This way you can change all the micro services that listen for event version 1 and add the code to handle version 2. Then update the emitting microservice to emit version 2 instead of 1, always with backwards compatibility in mind.

Batching is particular useful in high transaction environments. SQS and Kinesis streams are some services that offer batching messages, sending the batch to the Lambda function instead of each and every message separately. By batching the values in groups of around 10 messages instead of one, you might reduce your AWS Lambda bill by 10 and see an increase in system performance throughput.

By batching the values in groups of around 10 messages instead of one, you might reduce your AWS Lambda bill by 10 and see an increase in system performance throughput.

One of the downsides to batching is that it makes error handling complex. For example, one message might throw an error and the other nine are processed successfully. Then Lambda needs to either manually put that one failure on the DLQ, or return an error so that the external error handling mechanisms, like the Lambda DLQ, do their jobs. It could be that case that a whole batch of messages need to be reprocessed; here, being idempotent is again the key to success.

If you’re taking things to the next level, sometimes batching is not enough. Consider a use case where you’ve got a CSV file with millions of records that needs to be inserted into DynamoDB. The file is too big to load into the Lambda memory, so instead you stream it within your Lambda from S3. The Lambda can then put the data on a SQS queue and another Lambda that can take the rows in batches of 10 and write them to DynamoDB using the batch interface.

This sounds okay, right? The thing is, a much higher throughput and lower cost can actually be achieved if the Lambda function that streams the data writes to DynamoDB in parallel. Start building groups of batch write API calls, where each can hold a maximum of 25 records. These can then be started and limited to roughly 40 parallel/concurrent batch writes, without much tuning, you will be able to reach 2k writes per second.

Modern problems require modern solutions. Since traditional tools won’t work for a Lambda and serverless environment, it’s difficult to find visibility and to monitor the system. There are many tools out there to help with this including internal AWS Services like X-Ray, CloudWatch Logs, CloudWatch Alarms, and CloudWatch Insights. You could also turn to third-party tools like Epsagon, IOPipe, Lumigo, Thunderbird, and Datadog to just name a few. 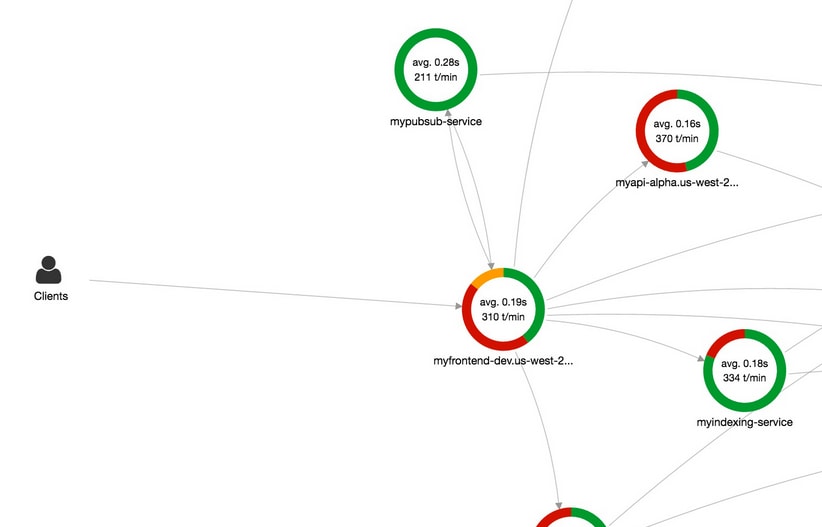 All these tools deliver valuable insights in the form of logs and charts to help evaluate and monitor the serverless environment. One of the best things you can do is to get visibility early on and fine-tune your Lambda architecture. Finding the root cause of a problem and tracing the event as it goes through the whole system can be extremely valuable.

So what’s the bottom line?

Always try to make Lambda functions stateless and idempotent , regardless of the invocation type and model. Lambdas aren’t designed to work on a single big task, so break it down to smaller tasks and process it in parallel. After that, the single best thing to do would be to measure three times and cut once; do a lot of upfront planning, experiments, and research and you’ll soon develop a good intuition for serverless design.