When you're building a large collection of independent components across a large enough team, people are going to have opinions about how to design each part of the system. This, in and of itself, is not a bad thing - product managers, engineers and designers should all pitch in on the look and feel of the system to provide a holistic perspective of what's desired, what's possible and what's most awesome-looking. But there are some thing that should remain consistent across the entire stack - the colors of buttons, the fonts, the look and feel of tables, the general padding and margin and borders of elements, etc.

A while back, there was no proper name for this desired "universalism" across the front-end part of software projects. At some point, most likely around the arrival of component-based frameworks (read: React), it became apparent to some of the largest software players in the world that having a universal design language for their products is probably a good idea. Some examples include Google's Material Design, GitHub's Primer and MailChimp's Patterns.

What's in a design system?

Most modern design system consist of multiple components, which can be divided roughly into two parts:

In the video I focus a bit more on the visual guidelines, but in this post I'll deal mostly with the components.

Generally speaking, if you're building a software product as part of another software company's ecosystem, and your product is intended to complement said company's product - you'll do well to comply with their design system. It will cause your product to integrate into the platform better, will save you the trouble of making a lot of design decisions and will often also save you quite a bit of time.

This goes double for products that are directly embedded into another piece of software - like Shopify apps. There are a lot of apps out there that use their own styles (usually Bootstrap) which just looks.... bad.

If you're building something to delight your users, and you're part of a larger ecosystem - you should either conform (if the outer styles are good) or differentiate (if the outer styles are the worst). In this case, Shopify really made a good design move, and I'd offer you to conform to their standards (and, to be honest, it does not hurt your chances of getting your app approved).

Polaris is Shopify's own foray into the design system game, and I will focus specifically on polaris-react - the React-based, Polaris-compliant component set.

First and foremost, it's important to note that the components we're going to see here look a little differently than the ones we've seen before. This is because they are not written in simple JavaScript, but in a superset of JavaScript called Typescript. What is a superset, you may ask? It's a set, that contains another set, and then some. What, you may rightfully ask, are you talking about? Doesn't matter. For the sake of this discussion, TypeScript is Javascript - with types. Fun to be had by all!

Seriously though, the only reason I'm even mentioning this is because I want you to understand that Polaris is not really anything new - it's just a bunch of components neatly wrapped up in a package. You should be able to re-create them yourself if you so please, not to mention be able to understand them. However, like in the case with React, I think it serves us to observe what they look like in the wild. To that end, I will take a look at two different components, one simple and one a bit more complicated and got a bit into depth on how they're built and how to use them.

The "Hello World" of Polaris is, in my opinion, the button:

Consider the directory structure of that button (located at https://github.com/Shopify/polaris-react/tree/master/src/components/Button ):

This feels like a lot of stuff for a button, right? Let's break it down:

That's where Button.tsx comes in - it's all about the props that you pass into the button, whose mixture configures how the button will look like.

All of those files eventually make, for example, this:

Which is not that much, right? Well, that's until you see that very same component as part of another component, and then everything starts to make a little more sense.

The beauty of Polaris, and actually React in general, is the fact that most things are re-used in some form or another in other things. In a more formal manner, a hybrid component is a component that's composed of other components - exposing only the top-most component for you to interact with.

It makes little sense for you to re-implement a button each time you need one, and doubly so if you'd like for the buttons to remain consistent across all your components. The Callout Card is component that combines a button inside of it, but you don't actually need to write <Button> anywhere yourself - the component takes care of this for you. 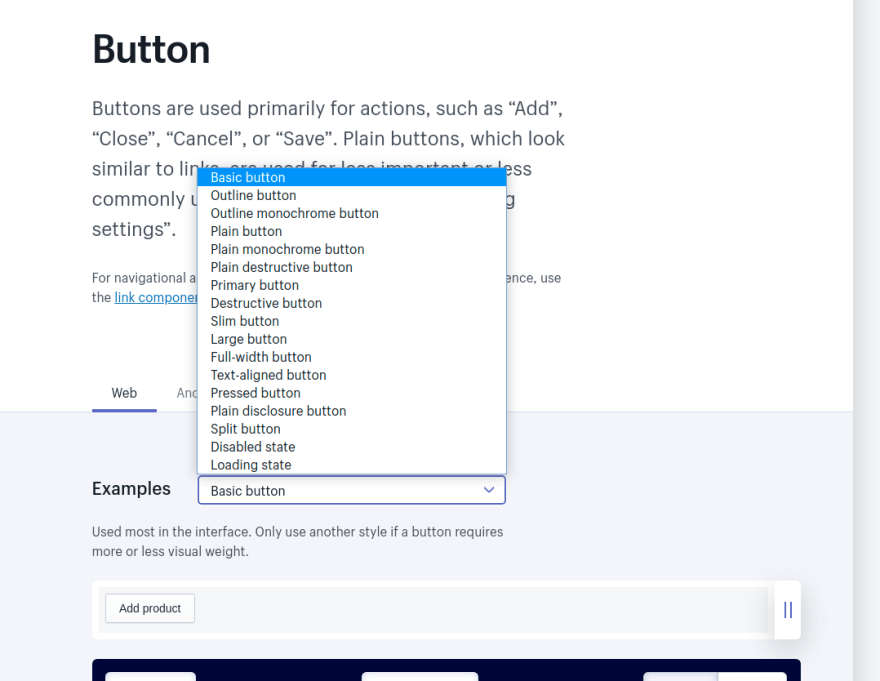 See the button there? It's actually created in the CalloutCard.tsx file:

And remember the utils.tsx file from the Button component? It actually contains this buttonFrom(action) funtion:

That, unsurprisingly, creates a button out of some action , which is an abstraction of whatever it is you'd like the button to do - throw up a pop-up, call some long-running task, delete something, refresh the page etc.

Let's look at the code for the CalloutCard this time, and actually observe how we can customize it. This is how the default CalloutCard looks like when you want to use it on your front-end:

So you are able to customize the following options of the card:

I think that's enough for Polaris - there's so much to go into, and I hope in the future to do a "Quick Hits" type series, talking and giving actual working examples of every Polaris component in production. For now, though, that should be enough to give you a feel for Polaris. Moving on!

What are some beginner level ReactJS questions to ask?