We had made a little of our flappy game in the previous post. We could fly our bird and draw the ground, bg etc. Now we are continuing the development by creating pipes as obstacles and we need to create a game over event and everything to finish up the game. So, let's get started.
Read the first part if you haven't : Part-0

Let's create the pipe which will generate randomly from the end of the screen and will scroll towards the bird. We need to manage the bird not to hit the pipes. So, let's first create the Pipe class.

Like we created the bird class, the pipe class has the __init__ method which is the constructor and the update method. We receive the x, y and position to define whether the pipe is on the upside or at the ground. We need to declare a pipe_gap variable at the top of the code and set it to 100.

We load the image of the pipe first and then position it according to the position argument. if position = 1, the pipe should be upside down like originating from the sky. And if it's -1 the pipe should be placed at the ground. Make sure we consider the pipe_gap when we set the y position of pipes.
Now let's jump into the update method.

Here we subtracted the scroll_speed from the image rect's x position to move the pipe leftwards. And if the pipe goes after the screen to the left side, we would destroy it. So, we could save some space. The pipe class is completed now.

we need to make a pipe_group like we created the bird_group one.

Jump into the loop and draw the pipe_group to the screen. make sure it's right above the code to draw the ground.

Now, we are drawing the pipe_group to the screen, but there is no pipe in the pipe_group. It's empty. we need to add that. To do that, declare a variable at the top of the code named pipe_frequency. Set it to 1500. Also declare a last_pipe variable.

We do this to generate the pipe after a defined frequency of frames each time.

Inside the loop, go to the position where we set the code to update the ground_scroll, inside a condition checking game_over == False and flying == True. Right inside the condition, add this.

Try the game now and you can see the pipes generating from the right side as the bird is flying. 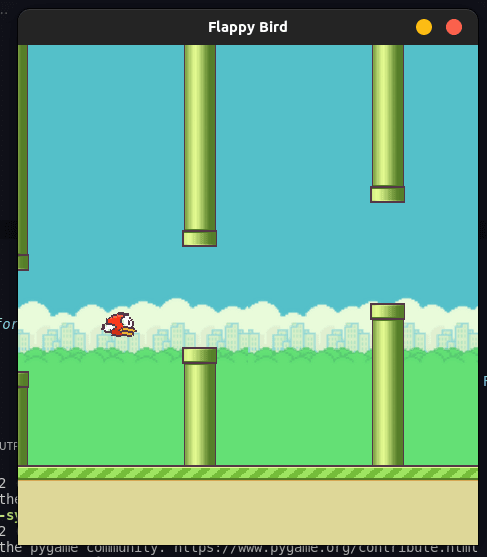 Collision and game over

Now, we don't have collision detection between the bird and the pipes. We need to check this to determine if it's game over or not.
Here is the simple code to check the collision. Paste it right inside the loop.

Pygame already has a groupcollide method to check if two sprite groups collide. We check the condition and set the game_over to true.
We need to stop the game if the bird hits the ground too. It's simple.

Add this code to the loop where we check if the flappy sprite goes greater than 420 where the ground is and set the game_over = true and flying = false.

We can make the score feature next. Declare a variable at the top first. Also a boolean variable named pass_pipe.

We have to check if the bird passes each set of pipes and increase the variable by one. Here's is the code to put inside the loop.

We check the coordinates of pipe_group and bird_group and increase the score according to that.
Try printing the score in the console, you can see it changes when the bird passes the pipe.

We don't need the score to being printed on the console or terminal. We need it inside the game, inside the graphics. Here we need text rendering. Let's create a draw_text function at the top of the code.

We get the text, font, text color and the x, y postion into the function and render the font into an image. Then draw it to the screen.
Now, we need to call this function from inside the loop.

The score variable converted to sting is supplied as the text here. The position need to be at the top centre. So, we divided the screen_width by 2 and set y to 20. We call a font and white variable which needed to be declared before, outside the loop.

We use Bauhaus font to render text. Run the game and you will see the score at the top. 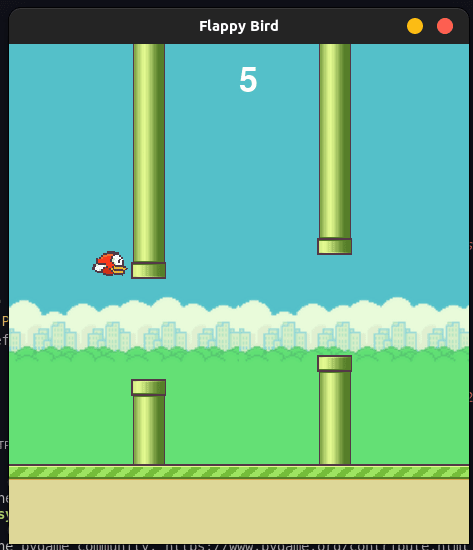 We need to display a restart button if the game is over and the game is need to be restarted when we click that. So, declare a Button class with __init__ and update method.

Need to receive a image and x, y as arguments and set the image according to the x, y.
In the update method we return if the mouse is clicked on the button. And also, we draw the button to the screen.
Now initialise the button,

Make sure to load the image into the button_img variable at the top.

Now draw the button inside the loop after checking if it's game_over.

Here we call the reset_game function which return the initial score(0). Declare this function at the top.

Try the game, intentionally hit the pipes and you will see a restart button at the centre of the screen. Click it, and the game will restart.

Hope you enjoyed developing the Flappy bird. I will be back with another tutorial soon. Drop your comments.

Here is the Github repo: Flappy

How to reverse an array in JavaScript

Once suspended, pulimoodan will not be able to comment or publish posts until their suspension is removed.

Once unsuspended, pulimoodan will be able to comment and publish posts again.

Once unpublished, all posts by pulimoodan will become hidden and only accessible to themselves.

If pulimoodan is not suspended, they can still re-publish their posts from their dashboard.

Once unpublished, this post will become invisible to the public and only accessible to Akbar Ali.

Thanks for keeping DEV Community 👩‍💻👨‍💻 safe. Here is what you can do to flag pulimoodan:

Unflagging pulimoodan will restore default visibility to their posts.