GraphQL is a query language for APIs designed by Facebook and intended as a replacement for REST. Apollo Server is a community maintained open-source server designed for GraphQL that runs on node. This post is a really minimal example of getting Apollo Server running - just so one gets a feel for the core parts. I'm therefore using a simple json flat file as a data store, and querying that with JavaScript; this isn't a particularly realistic GraphQL use case, but it is deliberately vanilla so as not to distract.

All code can be downloaded from my minimal-graphql-apollo-server repository. This worked example requires NodeJS, if you haven't installed it I'd recommend doing so following this StackOverflow answer.

At the terminal create a directory, and install the relevant software:

We need some data to query so create a file named db.json and insert the following text (I'm taking my inspiration from There was an old lady who swallowed a fly):

Create the file index.js and paste the following, which is responsible for the server itself:

Before we get on with the meat of the example it is worth briefly covering two of the most important concepts within GraphQL:

We create the schema and resolvers by pasting the following into a new file named schema.js:

The first section of this code, typeDefs, defines the schema we will be using. It starts with our primary object: Beast. The statements within quotes are free text - and can be skipped - but serve to make the lives of other developers (and you when you are reading your code months later) easier, by providing human readable descriptions of the fields. The majority of the fields in Beast are self-explanatory - they correspond exactly to the fields in db.json. The one exception however is isEatenBy, if you examine db.json you will see this is not present. We will therefore have to construct a resolver to implicitly tell the API what a beast is eaten by (logically we know this information - the database does have an eats field, and it follows that if x eats y, then y is eaten by x).

After our Beast object is Query. This shows we have three ways of querying this information:

The last section of typeDefs is Mutation - this is the part of the schema which allows us to add to the datastore, rather than just query it.

The next variable in the code is resolvers which is broken into three sections:

Explanations over, let's start the server. At the terminal enter:

Assuming success you should see a message similar to the following:

Pointing your browser at the URL given above you should now see the built-in playground where you can test your API.

Below the statement #Write your query or mutation here enter the following query:

If everything has worked you should see the following response: 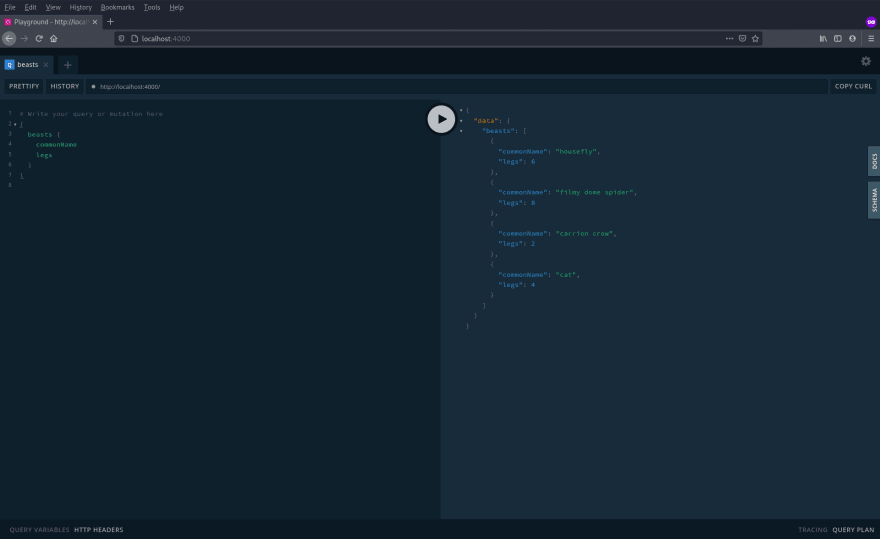 The resolvers we have built also allow us to supply arguments to define our search, so entering:

Will pull up data on the crow only: 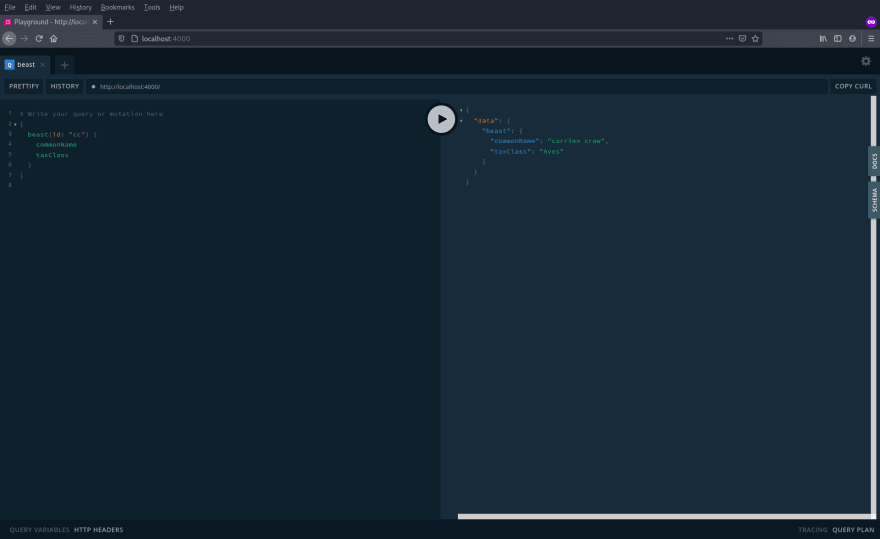 Using our API for real we will likely not be hardcoding an argument directly into the query so the Query Variables section of the playground allows us to add variables in a similar way as to how we might via a web page (e.g. a form). To use this enter in the main query section:

then in the Query variables field found at the bottom of the browser window enter the variable as so:

which should result in the following: 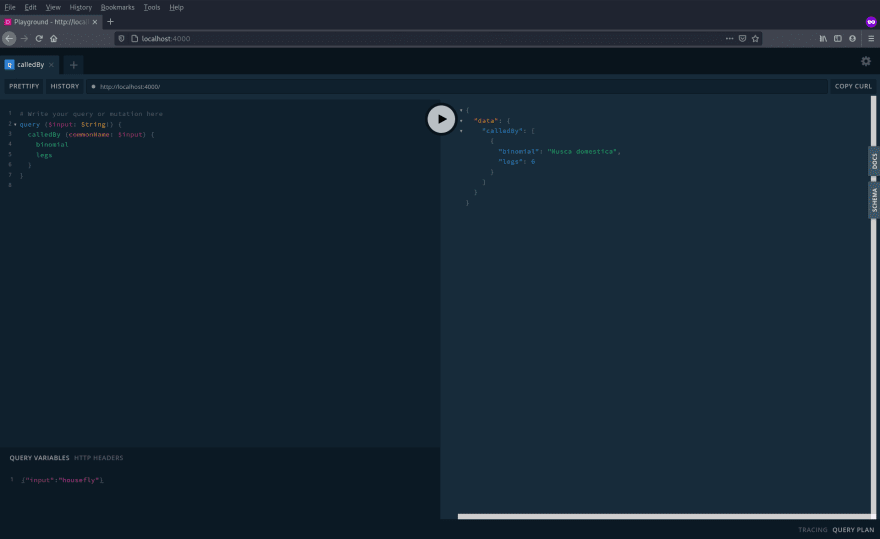 So far we have just been querying the data, we can also amend it via a mutation.

Our data set is missing some information; the old woman who has eaten all of these creatures. Therefore in the playground enter:

Success that the data has been entered should appear with a list of the beasts the poor lady has eaten: 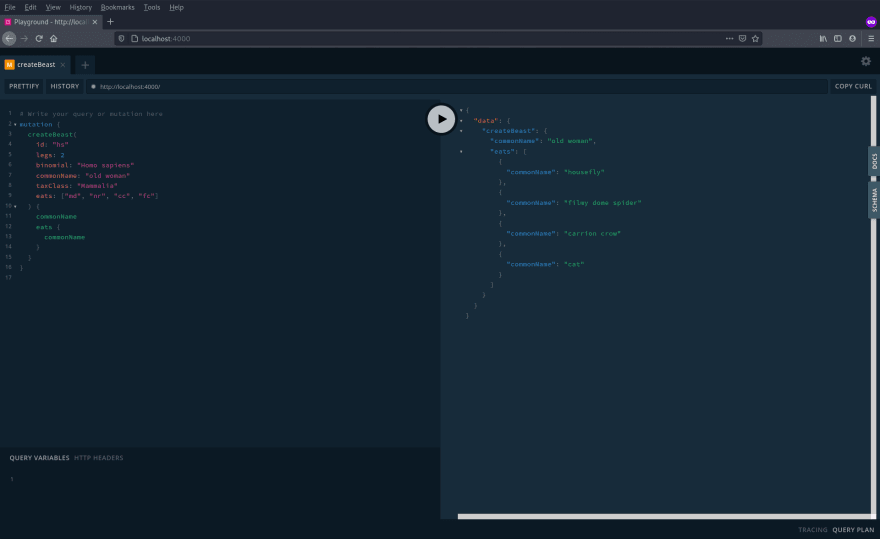 As this is a minimal example this mutation is in-memory only and isn't saved to disk (i.e. the db.json file) - if you restart the server the data will be erased.

The disadvantage to starting the server with node index.js as above, is that every time you make a change to the source code (like add a new resolver or amend the schema), you have to restart from the command line. Alternatively if you start the server with:

your code will be monitored and the server will restart automatically. Will save you lots of time if you are making frequent changes.

If you have found this useful, or have feedback, then please let me know in the comments. Further reading on this can be found at:

A Stateful, Serverless Database in React with the useReturn hook