This is a continuation of my progress through Data Science from Scratch by Joel Grus. We'll use a classic coin-flipping example in this post because it is simple to illustrate with both concept and code. The goal of this post is to connect the dots between several concepts including the Central Limit Theorem, hypothesis testing, p-Values and confidence intervals, using python to build our intuition.

Terms like "null" and "alternative" hypothesis are used quite frequently, so let's set some context. The "null" is the default position. The "alternative", alt for short, is something we're comparing to the default (null).

The classic coin-flipping exercise is to test the fairness off a coin. If a coin is fair, it'll land on heads 50% of the time (and tails 50% of the time). Let's translate into hypothesis testing language:

Here's the code for a single Bernoulli Trial:

Here's the code for when you sum all the Bernoulli Trials to get a Binomial random variable:

Note: A single 'success' in a Bernoulli trial is 'x'. Summing up all those x's into X, is a Binomial random variable. Success doesn't imply desirability, nor does "failure" imply undesirability. They're just terms to count the cases we're looking for (i.e., number of heads in multiple coin flips to assess a coin's fairness). 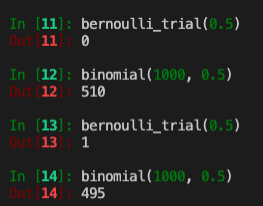 Each bernoulli_trial is an experiment with either 0 or 1 as outcomes. The binomial function sums up n bernoulli(0.5) trails. We ran both twice and got different results. Each bernoulli experiment can be a success(1) or faill(0); summing up into a binomial random variable means we're taking the probability p(0.5) that a coin flips head and we ran the experiment 1,000 times to get a random binomial variable.

The first 1,000 flips we got 510. The second 1,000 flips we got 495. We can repeat this process many times to get a distribution. We can plot this distribution to reinforce our understanding. To this we'll use binomial_histogram function. This function picks points from a Binomial(n,p) random variable and plots their histogram.

This plot is then rendered: 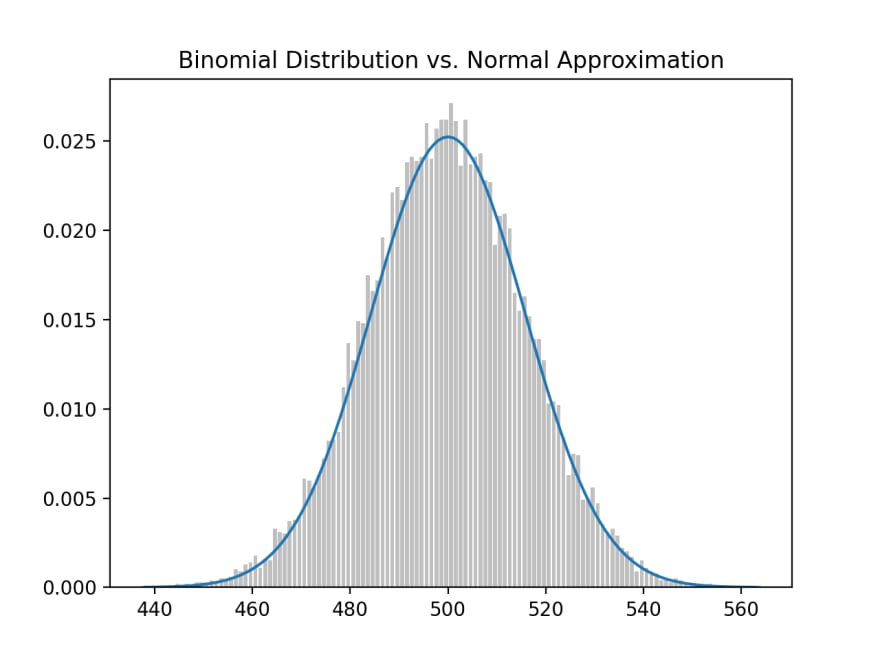 What we did was sum up independent bernoulli_trial(s) of 1,000 coin flips, where the probability of head is p = 0.5, to create a binomial random variable. We then repeated this a large number of times (N = 10,000), then plotted a histogram of the distribution of all binomial random variables. And because we did it so many times, it approximates the standard normal distribution (smooth bell shape curve).

Just to demonstrate how this works, we can generate several binomial random variables:

If we do this 10,000 times, we'll generate the above histogram. You'll notice that because we are testing whether the coin is fair, the probability of heads (success) should be at 0.5 and, from 1,000 coin flips, the mean(mu) should be a 500.

We have another function that can help us calculate normal_approximation_to_binomial:

Now that we have seen the results of our "coin fairness" experiment plotted on a binomial distribution (approximately normal), we will be, for the purpose of testing our hypothesis, be interested in the probability of its realized value (binomial random variable) lies within or outside a particular interval.

First, the normal_cdf (normal cummulative distribution function), which we learned in a previous post, is the probability of a variable being below a certain threshold. 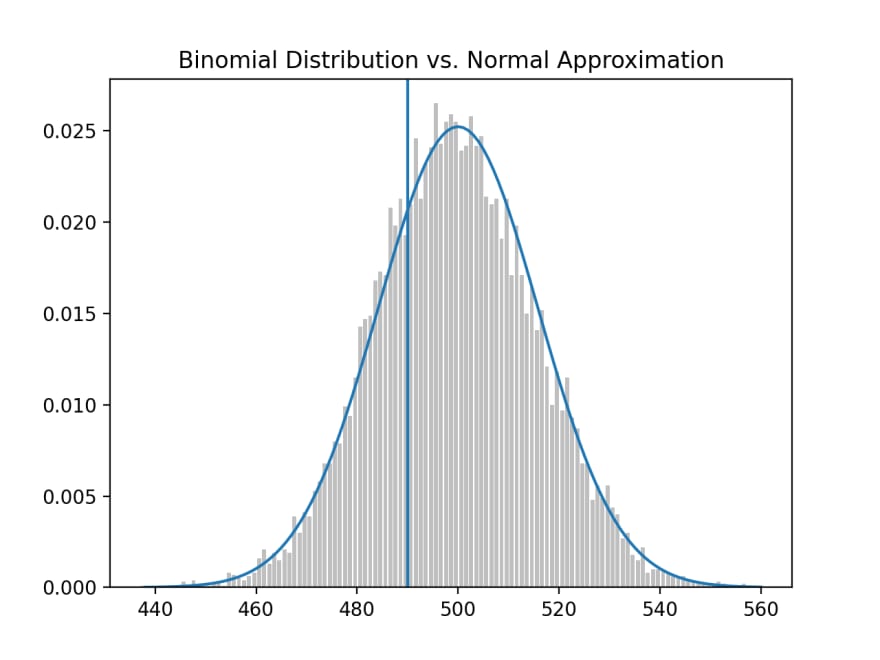 We may also wonder what the probability of a binomial random variable falling between 490 and 520: 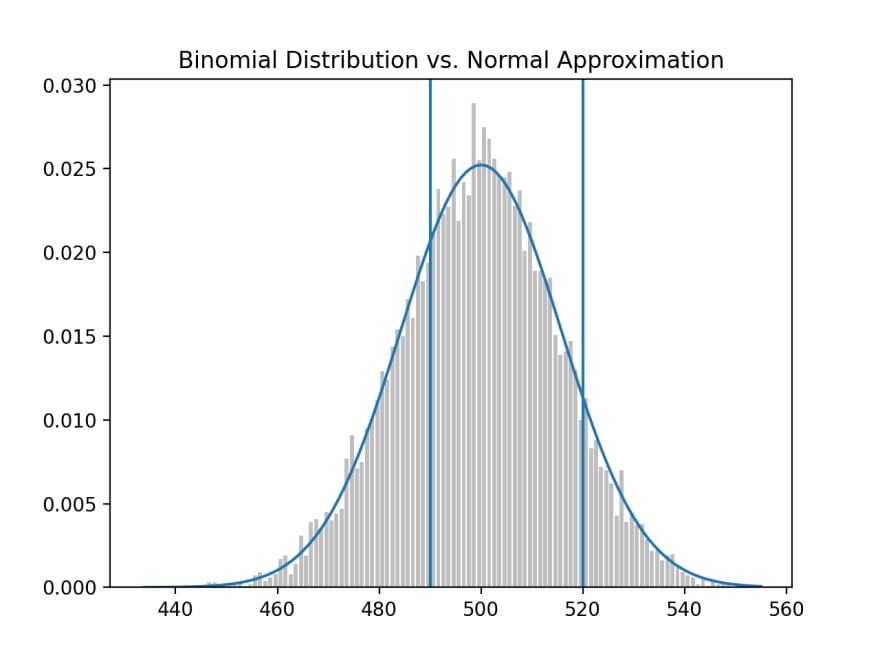 Here is the function to calculate this probability and it comes out to approximately 63%. note: Bear in mind the full area under the curve is 1.0 or 100%.

In addition to the above, we may also be interested in finding (symmetric) intervals around the mean that account for a certain level of likelihood, for example, 60% probability centered around the mean.

For this operation we would use the inverse_normal_cdf:

First we'd have to find the cutoffs where the upper and lower tails each contain 20% of the probability. We calculate normal_upper_bound and normal_lower_bound and use those to calculate the normal_two_sided_bounds.

Said differently, this means roughly 60% of the time, we can expect the binomial random variable to fall between 486 and 513.

Now that we have a handle on the binomial normal distribution, thresholds (left and right of the mean), and cut-off points, we want to make a decision about significance. Probably the most important part of statistical significance is that it is a decision to be made, not a standard that is externally set.

If we recall our hypotheses:

Each binomial distribution (test) that consist of 1,000 bernoulli trials, each test where the number of heads falls outside the range of 469-531, we'll reject the null that the coin is fair. And we'll be wrong (false positive), 5% of the time. It's a false positive when we incorrectly reject the null hypothesis, when it's actually true.

We also want to avoid making a type-2 error (false negative), where we fail to reject the null hypothesis, when it's actually false.

Note: Its important to keep in mind that terms like significance and power are used to describe tests, in our case, the test of whether a coin is fair or not. Each test is the sum of 1,000 independent bernoulli trials.

To calculate the power of the test, we'll take the assumed mu and sigma with a 95% bounds (based on the assumption that the probability of the coin landing on heads is 0.5 or 50% - a fair coin). We'll determine the lower and upper bounds:

And if the coin was actually biased, we should reject the null, but we fail to. Let's suppose the actual probability that the coin lands on heads is 55% ( biased towards head): 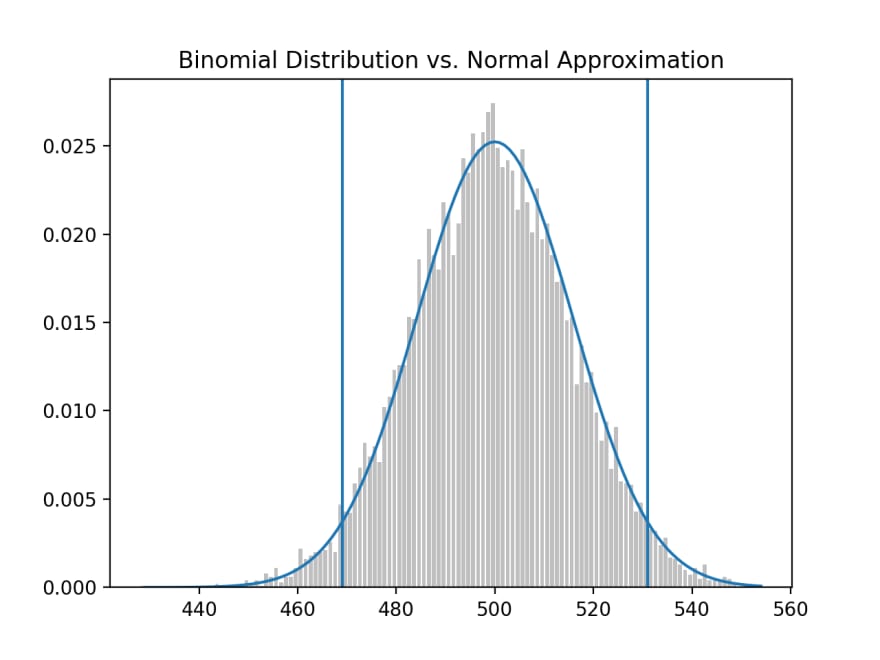 If the coin, in fact, had a bias towards head (p = 0.55), the distribution would shift right, but if our 95% significance test remains the same, we get: 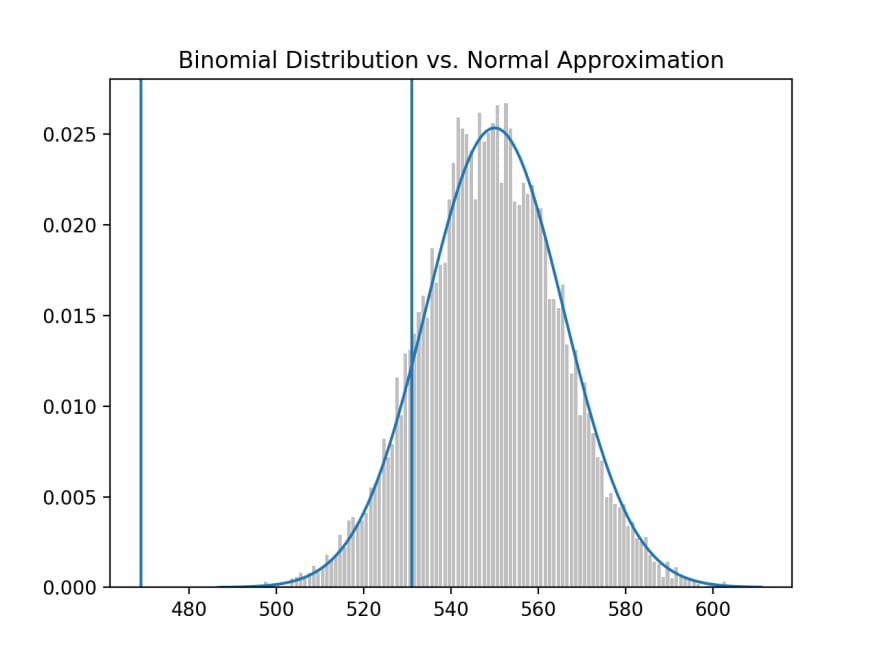 The other way to arrive at this is to find the probability, under the new mu and sigma (new distribution), that X (number of successes) will fall below 531.

Finally, we may be interested in increasing power to detect a type-2 error. Instead of using a normal_two_sided_bounds function to find the cut-off points (i.e., 469 and 531), we could use a one-sided test that rejects the null hypothesis ('fair coin') when X (number of heads on a coin-flip) is much larger than 500. 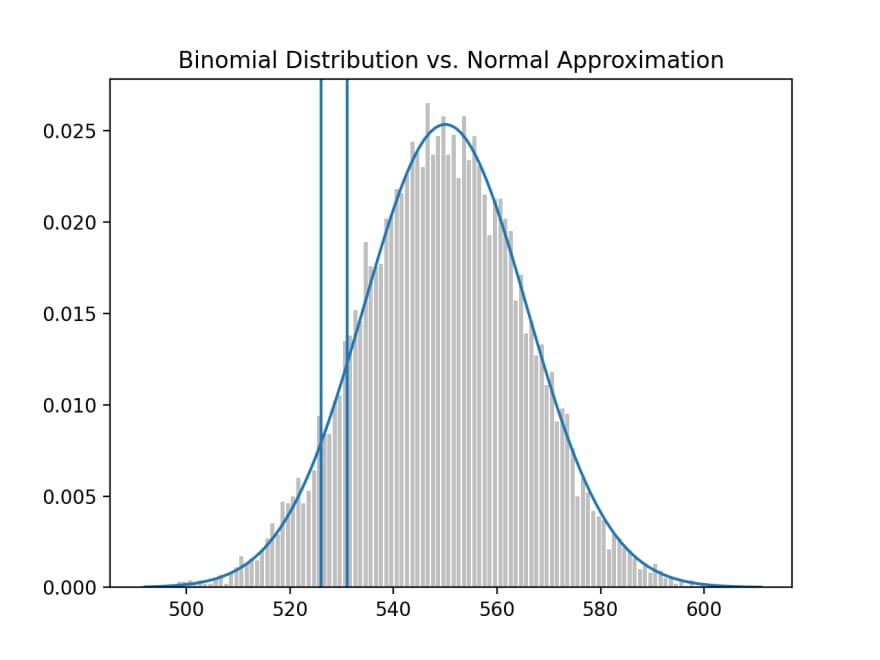 p-Values represent another way of deciding whether to accept or reject the Null Hypothesis. Instead of choosing bounds, thresholds or cut-off points, we could compute the probability, assuming the Null Hypothesis is true, that we would see a value as extreme as the one we just observed.

Under the two_sided_p_values test, the extreme value of 529.5 had a probability of 6.2% of showing up, but not low enough to reject the null hypothesis.

However, with a one-sided test, upper_p_value for the same threshold is now 3.1% and we would reject the null hypothesis.

A third approach to deciding whether to accept or reject the null is to use confidence intervals. We'll use the 530 as we did in the p-Values example.

If the extreme value were more extreme at 540, we would arrive at a different conclusion:

Here we would be 95% confident that the mean of this distribution is contained between 0.5091 and 0.5709 and this does not contain 0.500 (albiet by a slim margin), so we reject the null hypothesis that this is a fair coin.

We used several python functions to build intuition around statistical hypothesis testing. To highlight this "from scratch" aspect of the book here is a diagram tying together the various python function used in this post: 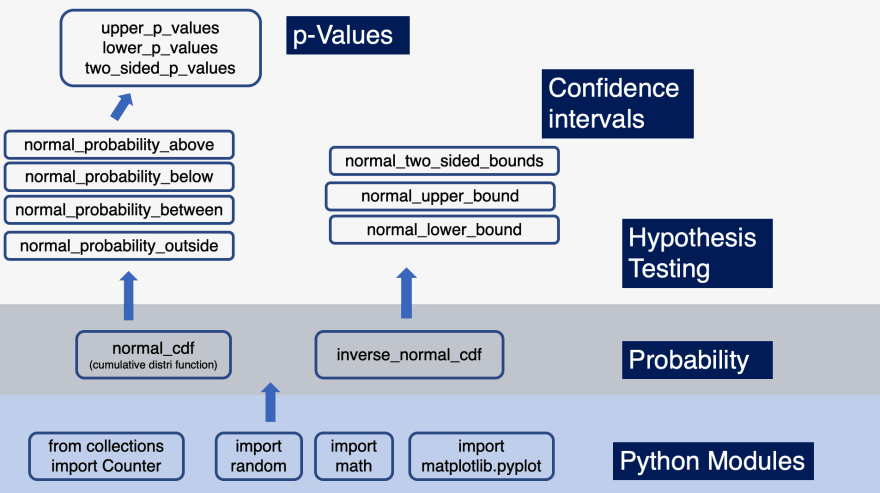 This post is part of an ongoing series where I document my progress through Data Science from Scratch by Joel Grus. 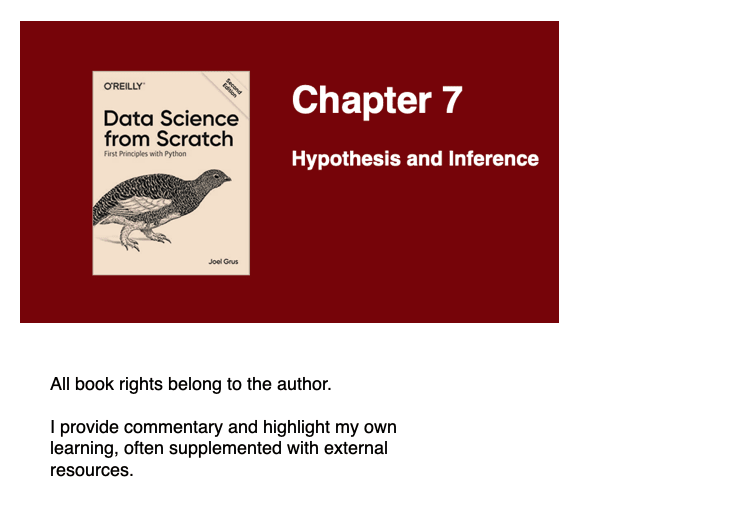 Honeycomb, Python, and I: an OpenTelemetry Horror Story (With a Happy Ending)