Last week I showed you the parts of design of the brainfuck computer that work outside of the BPU: memory and simple input/output systems. Today I'll tackle the BPU itself by setting up some essential registers and signals to control them.

What are registers again?

A register is a circuit that can store an amount of bits, broadcast their contents and synchronously (on a rising or falling edge of the clock signal) overwrite it's contents with new data. Registers can be augmented with additional circuitry to create counters or shift registers.

In CPUs, registers contain various data about the state of the machine, for instance a currently executed command, addresses of relevant places in memory or intermediate values of arithmetic operations. You will find examples of all these use cases in the BPU, although today I will only tackle the first two: storing commands and addresses.

What the BPU is currently doing

BPU commands will require multiple clock cycles to execute, mostly because only one memory address is accessible at a time and BPU accesses the memory a lot. This creates a need for the PR: a register that stores the currently executed instruction and loads the next one when it's finished.

As you may recall, compiled BAL words consist of a brainfuck command and it's argument. My BPU will use a variant of BAL that stores the command in the low bits of the word and the argument in the high ones. For 8-bit words it will look like AAAAACCC. 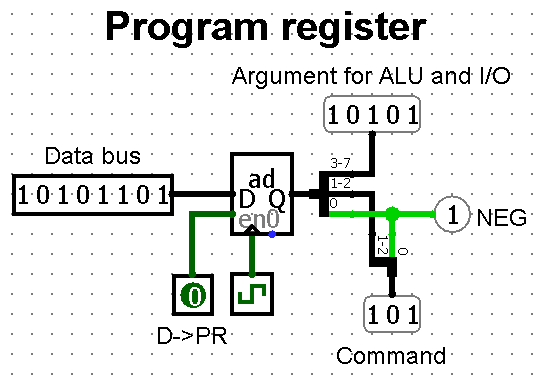 PR requires only one control signal called D->PR which enables synchronous loading data from the data bus. PR's output is split into three parts: the argument, the command and the NEG signal which is also part of the command. These signals will be interpreted by other components to make the BPU execute the correct command.

What the BPU is looking at

Brainfuck operates on a linear memory using a pointer (called Data Pointer) that moves left and right. This DP is changed by commands > and <. Therefore it needs a two-way connection to the data bus to pass its contents to the ALU to add to or subtract from it and to load its contents after modification. It also needs to connect to the address bus to perform its task of pointing at a cell.

Because of all these bus connections the DP requires three control signals to operate:

It is also connected to the Reset signal which, like the clock, is not generated by the BPU and comes from the outside. When this signal goes high the whole BPU is set to the starting state with all pointers set to zero and ready to load its first instruction. The PR didn't require this signal because the first thing the BPU should do after a reset is load a new command which overwrites contents of the PR anyway.

How the BPU knows what to do next

Another pointer the BPU will need is the PC which remembers position of the next command to execute. I will store it in a special variant of a register called a counter, which allows for easy incrementation of the value stored in it. This way I won't need to use the ALU to add 1 to the PC every time the BPU fethes a new instruction; however I will need to facilitate jumps, so connection to the ALU via the data bus is still required.

In addition to these PC has to load data from the data bus to do conditional jumps. Because jumps depend on a condition and the condition depends on the direction of the jump ([ jumps forward if the cell is 0, ] jumps backward if the cell is not zero) data loading is governed by three separate signals:

I'm not finished yet

This week I've shown you the circuitry needed for necessary BPU registers and set up first internal control signals that will govern the BPU's operation. Next week I'll design a simple ALU to do something with contents of these registers.

The big announcement is that I now have a proofreader! janekjan is my old friend and his English is way better than mine, so I'm very happy that he agreed to help me. Blame him for all the mistakes in the text now.

Another important news is that the BPU now has a github page! It is public and will contain all the materials for this tutorial, which currently means the Logisim file with all the designs. At some point in the tutorial I will make stuff like a compiler or some example programs and they will surely end up on this repo.

Final note: I see people reading my articles and some of them even leave hearts, but I could use some feedback. The question is how do you find the difficulty level of my tutorial? Should I perhaps explain in more detail how the components I'm using work? Maybe you would like to hear more about how I come up with the Logisim designs? Or possibly I spend too much time explaining the basics and you would rather just jump into the final designs? Share your thoughts in the comments.

How to convert Tex to PDF with a LaTeX API

Wheatcha - MVP release! A catalogue of the best tech videos on YouTube.

Once suspended, olus2000 will not be able to comment or publish posts until their suspension is removed.

Once unsuspended, olus2000 will be able to comment and publish posts again.

Once unpublished, all posts by olus2000 will become hidden and only accessible to themselves.

If olus2000 is not suspended, they can still re-publish their posts from their dashboard.

Once unpublished, this post will become invisible to the public and only accessible to Alex Esoposting.

Thanks for keeping DEV Community 👩‍💻👨‍💻 safe. Here is what you can do to flag olus2000:

Unflagging olus2000 will restore default visibility to their posts.