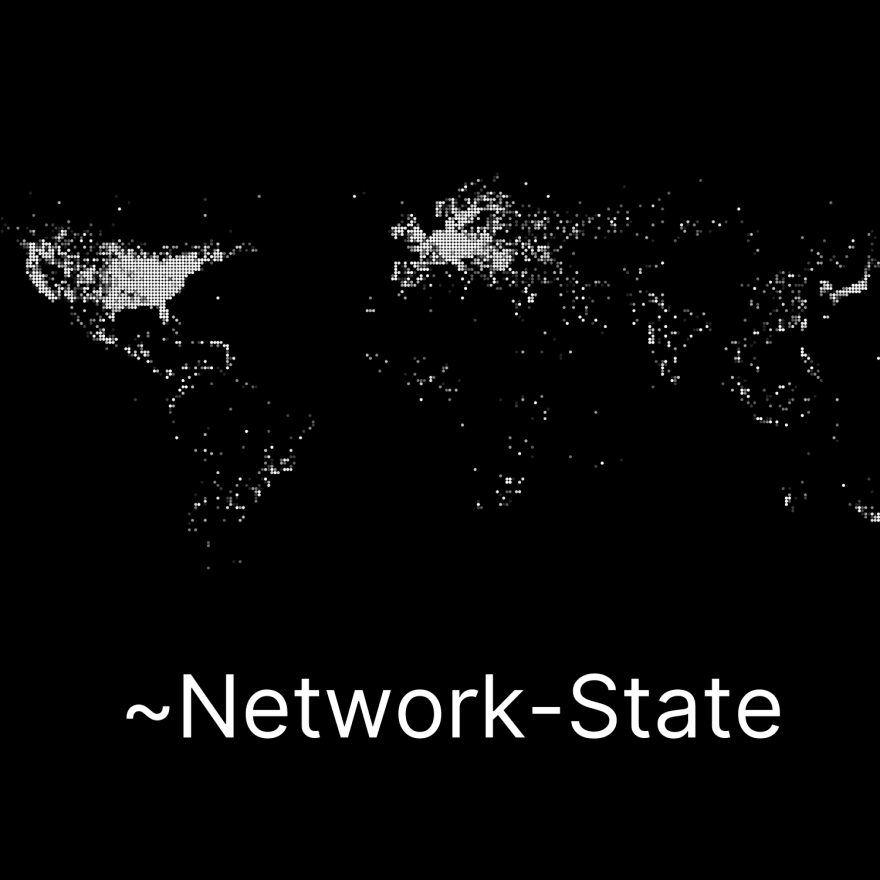 Over the last months, there have been more and more voices around the ideas of the Network state.

I was first introduced to these brands of ideas while reading book: "The Sovereign Individual". In the new cyber-world, societies are bound to organize again in merchant republics and city-states. The book was written in the late 1990s, thus the use of "cyber".

It argues that our obsession with nation-states will be equally bizarre in the future, as the medieval oaths are today.

The Internet converts everything to a frontier, as it brings together people that are located all over the globe. In a world where people and capital can move freely, the nation-states will have to compete.
Compete in the sense of keeping capital and people from fleeing. Although violence works for people, capital in the form of cryptocurrency will move either way. Voting with your feet, as Balaji S. Srinivasan notes, will be much more effective than voting with your wallet or vote.

With that in mind, the ideas that have been championed by futurist, startupper, and investor Balaji S. Srinivasan are not that bizarre. Actually, they fit right in.

Balaji's thesis is simple. Geographical proximity no longer equates to cultural proximity. Thanks to the Internet, we can communicate and form online communities, as we already have. Using blockchain as a consensus layer to codify the group's rules, we can form a state. A network state, that is.

First online, then on land.

As he underlines, there is a very simple reason to do this.

We want to be able to peacefully start a new country for the same reason we want a bare plot of earth, a blank sheet of paper, an empty text buffer, a fresh startup, or a clean slate. Because we want to build something new without historical constraint.

As you can imagine, the domain is vast, covering many different domains, from legal to construction. Thankfully, there are a handful of people already working on such ideas. Creator Cabins is a great example of an MVP project, where they explore the actual creation of small facilities.

There are other, larger-scale examples, like culdesac. They are building a whole neighborhood from scratch, right in the US.

Of course, a neighborhood is a far cry from actual sovereign land, but it's a start.

Now, seeing all these disparate discussions online, I thought that a community would be a great place for people to come together and talk about this domain.

This is a by-definition multi-disciplinary domain. The more diverse the community is, the more fruitful the discussions will be.

The long-run is particularly important, especially if we want a real societal change. A geographically distributed group of people, but who share common values and culture.

We want to bring us together.

To interact with the network-state community, you will need Urbit.

If you haven't heard about it, no worries. It's a complete re-definition of modern computing, so let's talk about Urbit for a bit.

Urbit is an entirely new paradigm in personal computers. It's a compact system for an individual to run their own permanent personal server on any Unix machine with an internet connection.

Urbit was created as an exit from a world where applications and services and controlled by big companies. It's not only that they monetize your data, but it's also about the very fact that they can deplatform you at any time.

Urbit believes that the only way forward is for us to run the services and applications. They achieve it by creating an entirely new OS and peer-to-peer network that is simple by design and 100% owned by its users.

It's an entirely new stack, an integrated tool for people to communicate and build communities. A tool that the people themselves control, they can trust and extend to their liking. 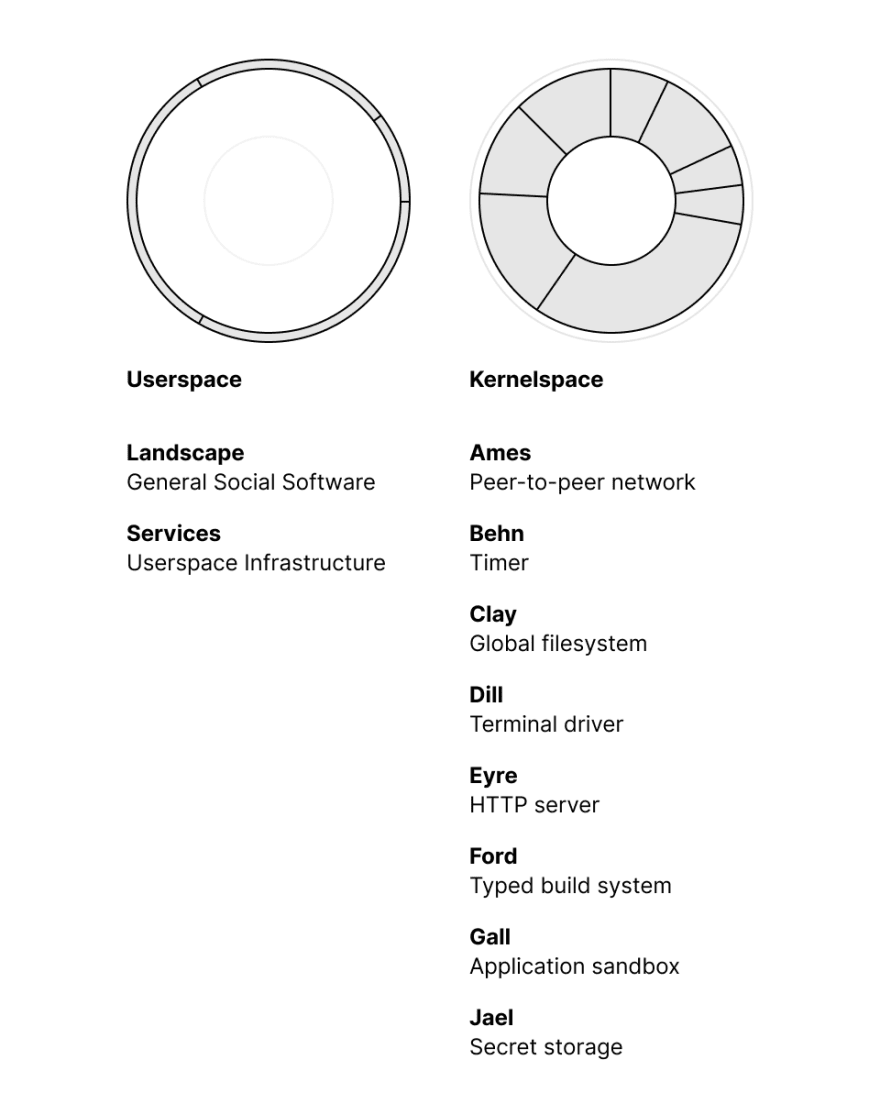 Urbit OS is a new, carefully architected software stack: a VM, programming language, and kernel designed to run software for an individual.

It's completely sealed from the system it runs on. In the Urbit world, every person has their own Urbit OS node. 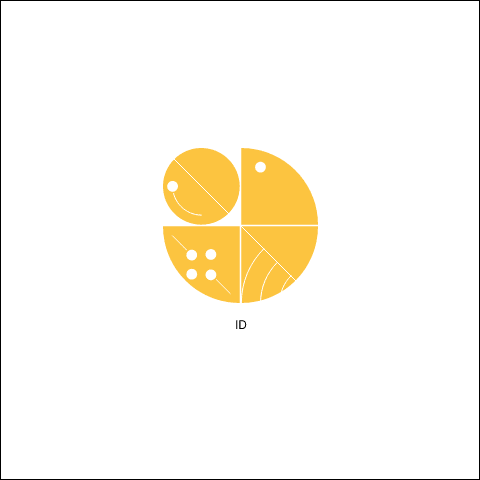 Urbit ID is an identity and authentication system specifically designed to work with Urbit OS. When you boot or log in to Urbit OS, you use your Urbit ID.

The Urbit ID is a short memorable name (e.g ~ravmel-ropdyl) that it's a username, network address, and cryptocurrency wallet all in one. Since it's registered on the Ethereum blockchain, it's yours forever. It's cryptographic property.

In early 2020, Urbit released OS 1. A minimal interface for group communication happens to be the first complete interface. This is the Eden of our community.

Lanscape, as the interface is called, will be the place where we will collaborate and have our discussions. A calm place for people who search for the truth.

To join the community, you will have to install Urbit.

The easiest way is to follow the Getting Started Guide and use the Port Application: 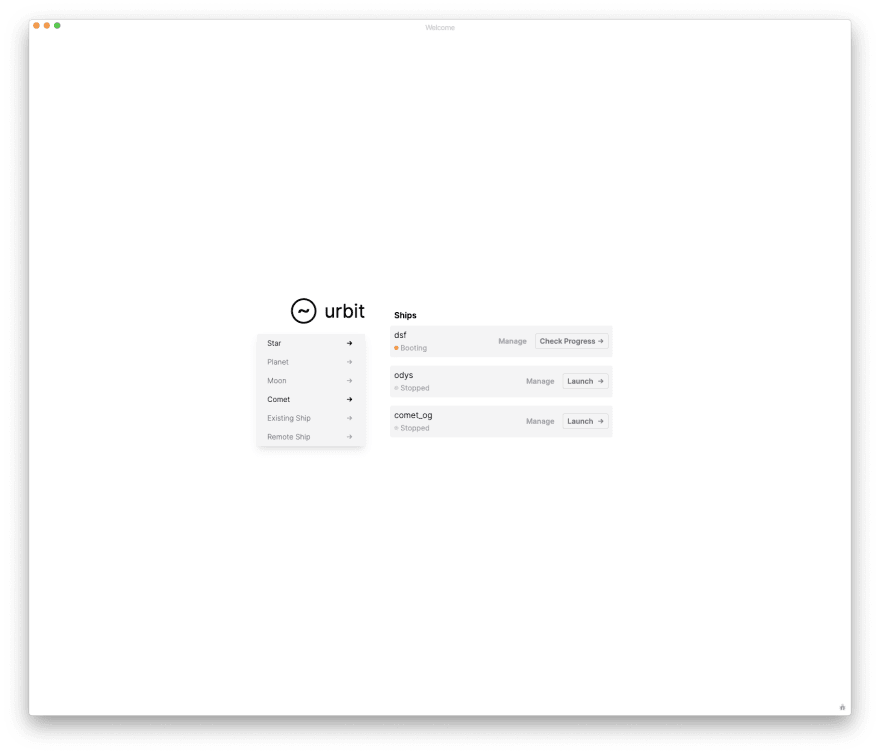 Although the CLI is more technically involved, it's an older, more stable client. It's a good alternative in case you face any challenges with the Port.

Linux users may need to run this command in another terminal window to access your Urbit on port 80:

After installation, you should see a block of output that beings with the following line:
Urbit: a personal server operating function

Welcome to your last computer.

A core concept of Urbit is its Identity. Although we won't go into detail here, it's important to remember that IDs have a hierarchy in the Urbit universe.

You can read more about Urbit identities in the docs

Planets are scarce, as this prevents spamming amongst other things. This artificial scarcity makes planets valuable and thus not free.

If you have already acquired a planet, you can follow this guide.

Comets on the other hand are practically unlimited and free. It's a great way to try out the network for free. They have a very long and unwieldy name

As we read from the urbit documentation:

You can continue using this comet indefinitely. There are currently few differences between using a comet-level identity and a planet-level one. However, some groups will not allow comets entry in order to maintain a certain level of quality, and changes may be made in the future that further devalue comets. They will always, however, be able to access the basic functions of the network.

A comet also comes with a long and fairly unmemorable name whereas a planet has a short name and a "sigil" (avatar) associated with it that makes it more identifiable on the network. You may notice all this within the first few minutes of using Urbit.

Landscape is the UI of this new computer. To visit landscape, just visit localhost on your computer.

If it doesn't work, try localhost:8080, which is the fallback port in case the default HTTP port 80 is already taken by another app.

Search for the following output in your terminal. It will tell you the port of your Urbit.

Welcome to the clean slate OS 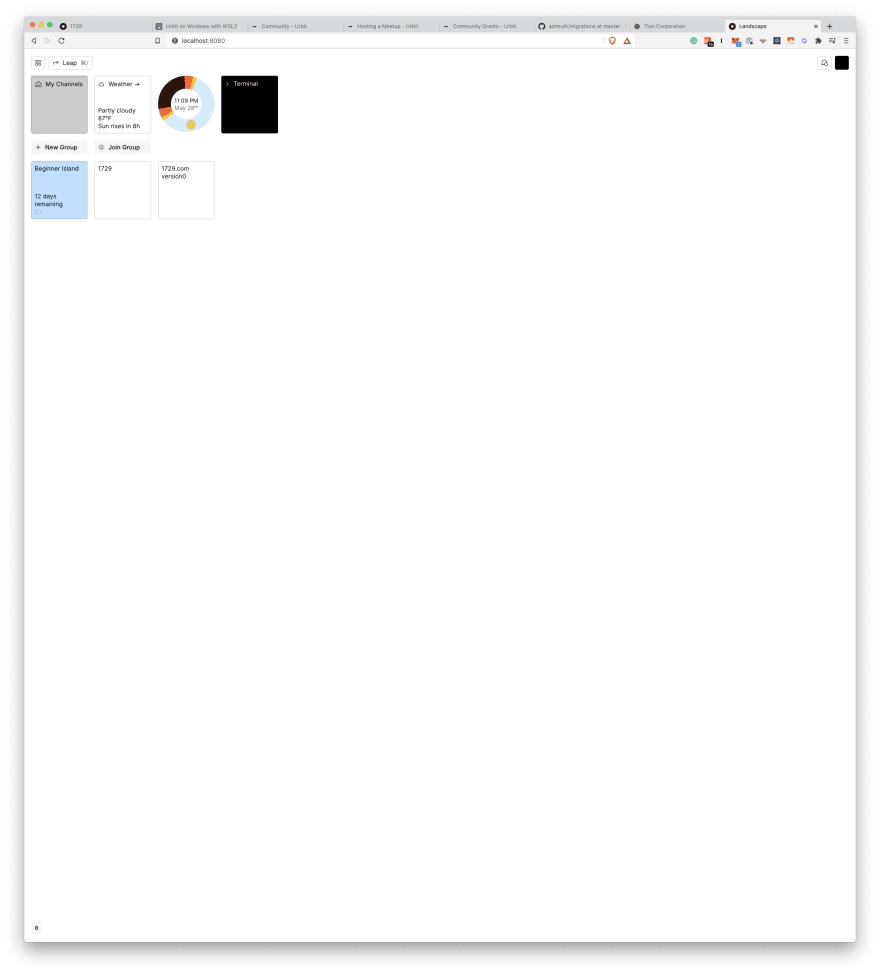 Open the application and choose your comet. Click Launch and that's it! 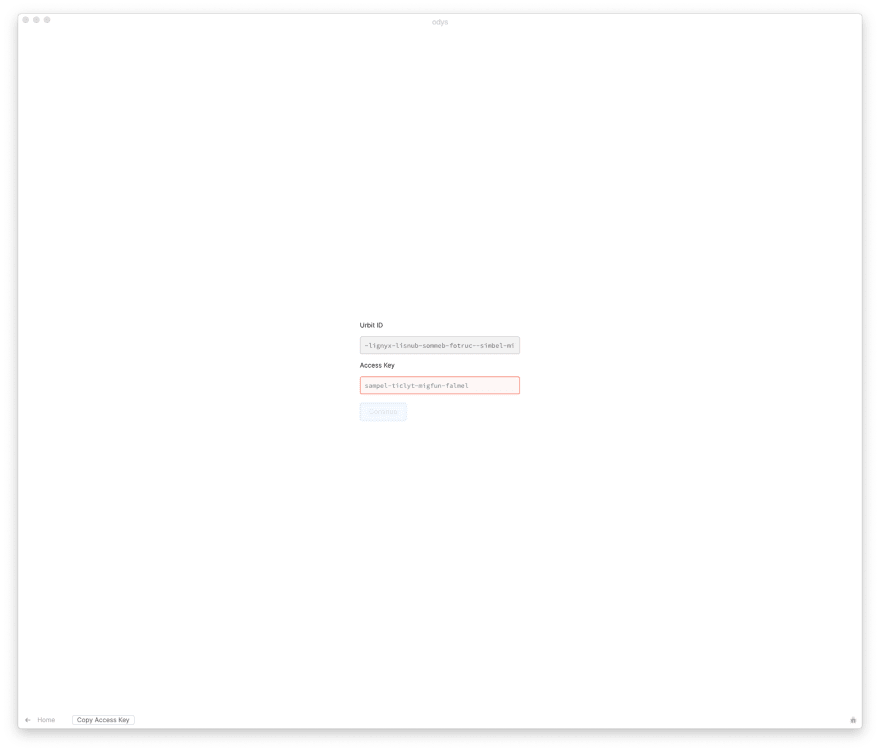 Note: You can find your Access Key by pressing the bottom left button. 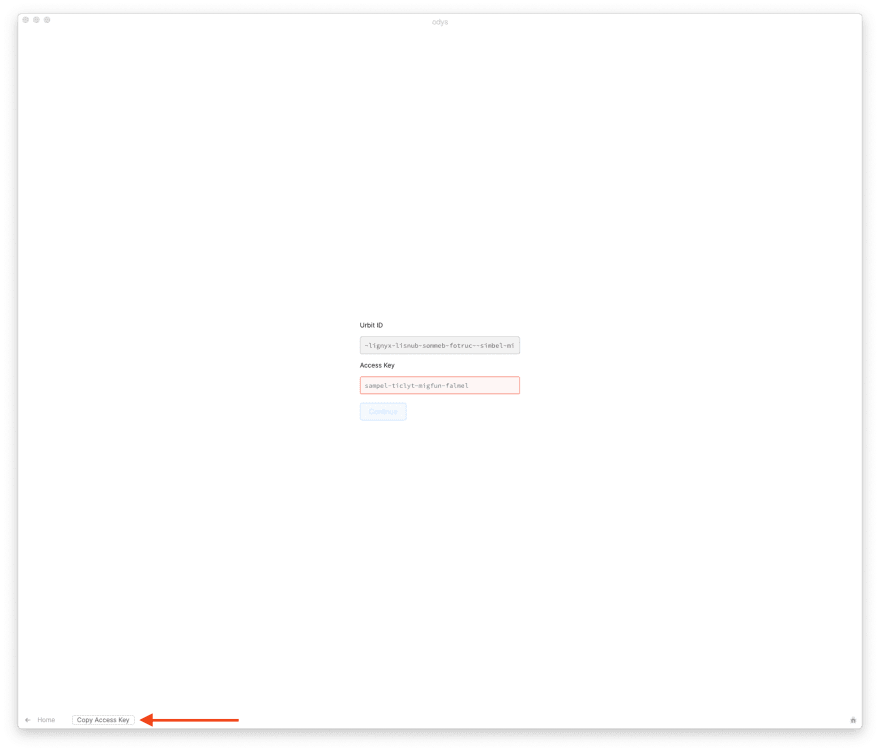 We are going now to boot our free identity, or comet. It's very simple.

Caveat: When you run urbit again, you will not use the flag -c. Thus, ~/urbit/urbit mycomet.

It can take a while to load the comet since we need a unique id. Be patient.

Once it finishes loading, you should see the following line at the terminal

~sampel_marzod:dojo>, where dojo is the Urbit command line.

Before proceeding go ahead and type +code in the terminal. Copy the result, we will need this. 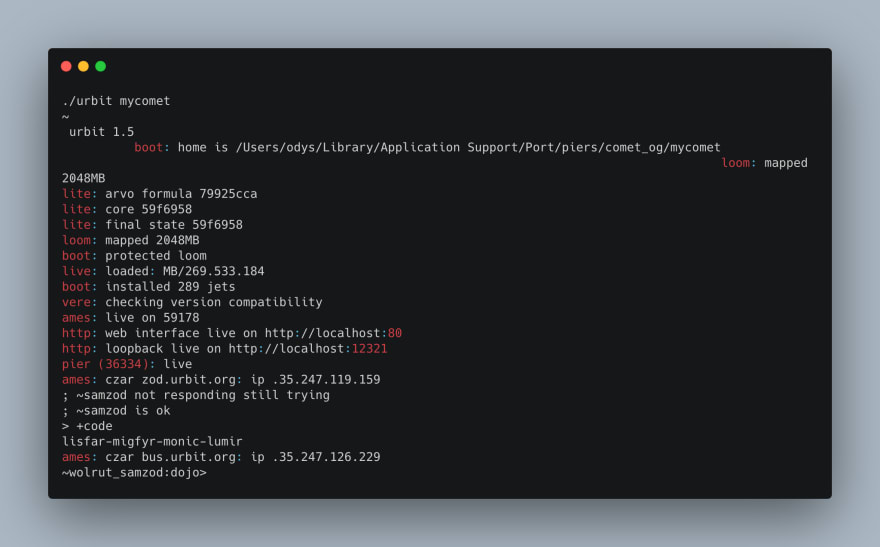 To join the community, click on "Join Group" and type ~pitrup-nosfyl/network-state 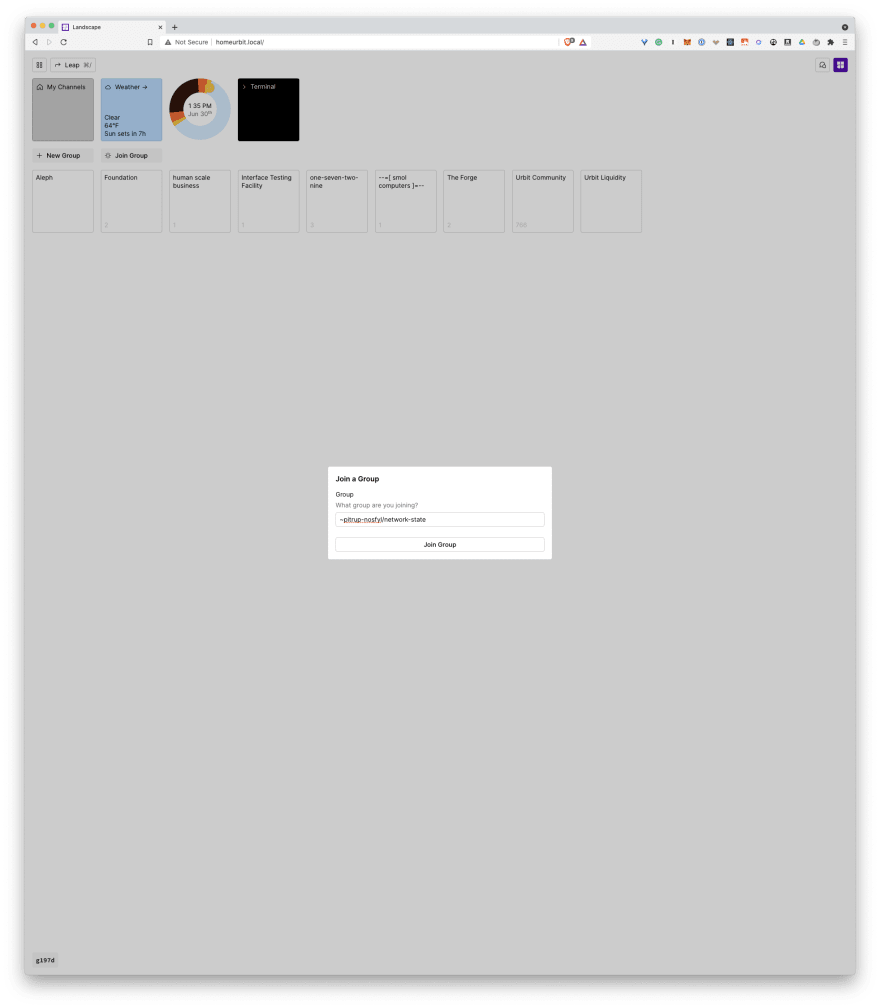 You should land on an empty page with all the channels greyed out. Welcome to our community. 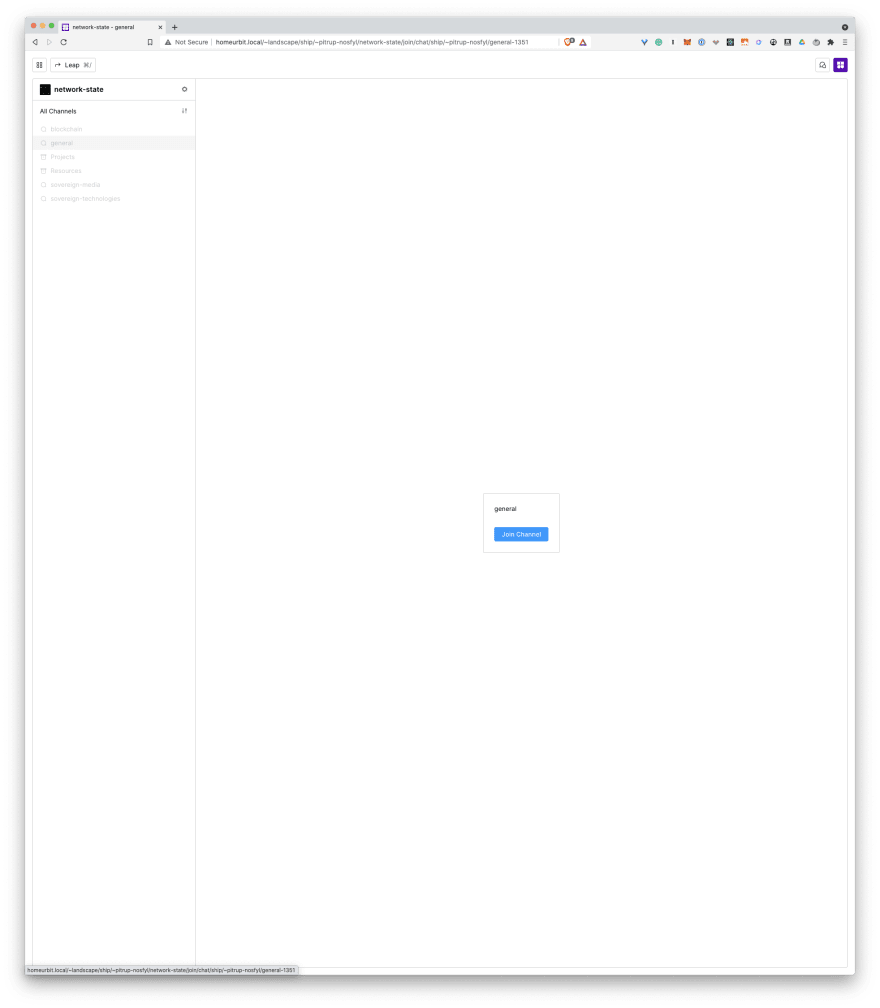 Before proceeding to discover the discussions, make sure you leave a comment in the intro channel. It's a great place to get to know each other, not on a personal level necessarily, as we live in the pseudo-anonymous age. But, we would like to know why you joined the group if you are engaged in relevant projects and whatever else relevant.

For updates about the community, you should see the Group Feed.

The community is very new, so everything that you see is open for change. If you feel that something is missing or should be altered, please do say so.

The community is only as good as its members are, so if you think you can improve the shared experience, it's up to you to improve it. Sending me a message is a good start.

Welcome to the future of communities.

A small note before I let you go. Although this group will be focused on ideas around sovereign individuals and the network state, there is already a discord group of 1729ers.

1729 is a project started by Balaji. As he describes it:

It's a newsletter for technological progressives. That means people who are into cryptocurrencies, startup cities, mathematics, transhumanism, space travel, reversing aging, and initially-crazy-seeming-but-technologically-feasible ideas. Basically, if you like @balajis' past work, you will enjoy this

For now, we don't expect to create an Urbit group for 1729, but if there are users who prefer urbit for its more private, decentralised experience, we will consider offering the choice. The goal is to bring people together, not split them up.

To join the Discord group: https://discord.gg/WPN3XftmkV

Here is a helpful list of resources that might prove useful, as you enter this domain's rabbit hole.

How to iterate over object properties?

What I Learned This Week - Week 2