How to extend the Geth collector

This is the the last of a 2-part blog post series regarding Netdata and Geth. If you missed the first, be sure to check it out here.

With this proof of concept I wanted to showcase how easy it really is to gather data from any Prometheus endpoint and visualize them in Netdata. This has the added benefit of leveraging all the other features of Netdata, namely it's per-second data collection, automatic deployment and configuration and superb system monitoring.

The most challenging aspect is to make sense of the metrics and organize them into meaningful charts. In other words, the expertise that is required to understand what each metric means and if it makes sense to surface it for the user.

Note that some metrics would make sense for some users, and other metrics for others. We want to surface all metrics that make sense. When developping an application, you need much lower level metrics (e.g eBPF), than when operating the application.

Let's get down to it.

A note on collectors

First, let's do a very brief intro to what a collector is.

In Netdata, every collector is composed of a plugin and a module. The plugin is an orchestrator process that is responsible for running jobs, each job is an instance of a module.

When we are "creating" a collector, in essence we select a plugin and we develop a module for that plugin.

For Geth, since we are using the Prometheus Endpoint, it's easier to use our Golang Plugin, as it has internal libraries to gather data from Prometheus endpoints.

The following image is useful: 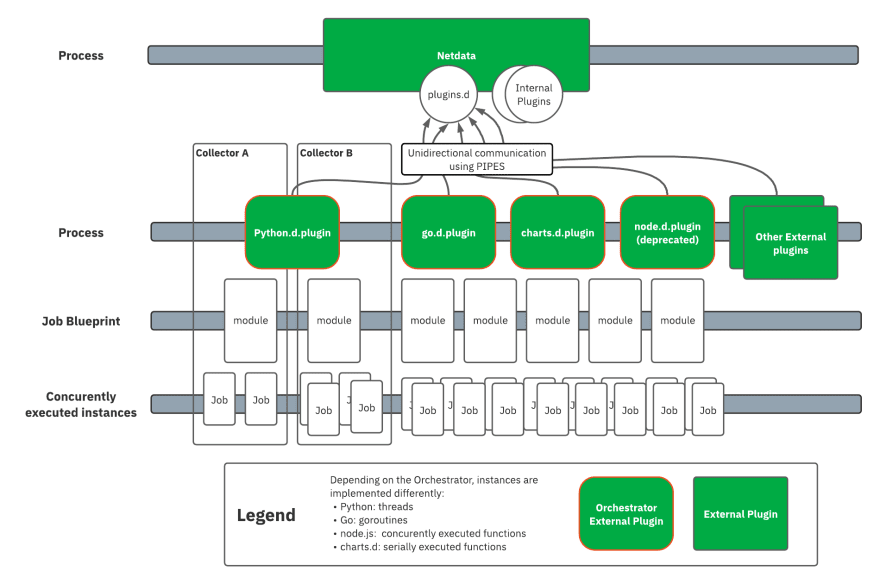 If you want to dive into the Netdata Collector framework:

So, in essence, the Geth collector is the Geth module of the Go.d.plugin.

As you can see on GitHub, the module is composed of four files:

How to extend the Geth collector with a new metric

Open your Prometheus endpoint and find the metrics that you want to visualize with Netdata.

Open collect.go and create a new function, identical to the one that already exist. Although it doesn't really makes a difference in our case, we strive to organize the metrics into sensible functions (e.g gather all p2pEth65 metrics in one function). This is the function that we will do any computation on the raw value that we gather.

Note that Netdata will automatically take care of units such as bytes and will show the most human readable unit in the dashboard (e.g MB, GB, etc.)

We also need to add the function in the central function that is called by the module at the defined interval.

Lastly, now that we have the value inside the module, we need to create the chart for that value. We do that in charts.go:

Let's explain the fields of the structure:

A final note on extending Geth

The prometheus endpoint is not the only way to monitor Geth, but it's the simplest.

If you feel adventurous, you can try to implement a collector that also uses Geth's RPC endpoint to pull data (e.g show charts about specific contracts in real time) or even Geth's logs.

To use Geth's RPC endpoint with Golang, take a look at Geth's documentation.

To monitor Geth's logs, you can use our weblog collector as a template. It monitors Apache and NGINX servers by parsing their logs.

Now that we have defined the new charts, we may want to define alerts for them. The full alert syntax is out-of-scope for this tutorial, but it shouldn't be difficult once you get the hang of it.

For example, here is a simple alarm that tells me if Geth is synced or not, based on whether header and block values are the same:

You can read the above example as follows:
On the charts that have the context geth.chainhead (thus all the Geth nodes that we may monitor with a single Netdata Agent), every 10s, caluclate the difference between the dimensions chain_head_block and chain_head_header. If it's not 0, then raise alert to warn. If it's more than 5, then raise to critical.

Some useful resources to get you up to speed quickly with creating alerts for our Geth node:

Note that if you create an alert and it works for you, a great idea is to make a PR into the main netdata/netdata repository. That way, the alert definition will exist in every netdata installation, and you will help countless other Geth users.

Here are some useful resources to create new alerts:

Extend Geth collector for other clients

The beauty of this solution is that it's trivial to duplicate the collector and gather metrics from all Ethereum clients that support the Prometheus endpoint:

The logic that I described above stays exactly the same.

As you may suspect, this guide is applicable for any data source that is exposing it's metrics using the Prometheus format.

Infrastructure as Code: The benefits and the tools

A beginner’s guide to go_router in Flutter

ECS auto-scaling based on Amazon MQ for RabbitMQ’s queue depth.

Once suspended, netdata will not be able to comment or publish posts until their suspension is removed.

Once unsuspended, netdata will be able to comment and publish posts again.

Once unpublished, all posts by netdata will become hidden and only accessible to themselves.

If netdata is not suspended, they can still re-publish their posts from their dashboard.

Once unpublished, this post will become invisible to the public and only accessible to Odysseas Lamtzidis.

Thanks for keeping DEV Community 👩‍💻👨‍💻 safe. Here is what you can do to flag netdata:

Unflagging netdata will restore default visibility to their posts.