This is the second part of the series about Tachyons to Tailwind migration. Having finished the preparation works, we’ll show here how we made the transition itself and the tooling we built for it.

Not all utility classes are equal (during migration)

So where do we begin? What utilities should we start with? We estimated to have a few hundred distinct Tachyons classes declared in around 20 SASS files… To not get overwhelmed by this mass, we needed a tool that would guide us a bit. So we built it.

compare_classes.rb is a small ruby script that compares the names and declarations of all Tachyons utility classes to the Tailwind ones and gives some helpful pointers for their migration. It works as follows:

Please read the instructions in the script carefully. The script gives best results when the two CSS files are prepared in a certain way:

The output of this script when run in the beginning of migrations may look similar to this:

All right, this might still sound overwhelming but we repeatedly used this summary throughout the whole migration process as a guide where to move on and how much work was still left (see our rule #3). We decided to start with the ”Renamed classes“ as they have known counterparts in Tailwind but without any risk of collisions. We guess it’s the time to present the migration script!

To be able to repeatedly migrate utility classes between the two systems, we built a script named tachyons_to_tailwind.rb which is accompanied by a YAML config file.

We used this script iteratively to convert a handful of classes at a time but it could as well be preconfigured to migrate all utilities in the whole project at once, if you feel brave enough.

Let’s briefly show how it works:

The core of the script is a somewhat complex regular expression around line 85. It matches the utility classes in various contexts. For example, we use Slim for our templates, so most of our classes look like .this. But they can also appear in a multitude of other situations, such as in Rails helpers or in JavaScript (e.g. "this" or 'another this'). While not reliable absolutely, the regex seems to tackle all these contexts almost perfectly and we came across only very few places in our codebase that we had to convert by hand.

The conversion script would do nothing without proper configuration, which is expected in the same directory in a YAML file called tachyons_to_tailwind.yml. The preceding gist includes a sample version of this config file. While it has been extracted from our actual config file during the migrations, it is very likely that your setup will be different and you’ll need to update the scales and / or add some other Tachyons classes, at the very least.

The file recognizes the following sections:

With these config options, you can describe the complete transformation rules for all your utility classes and their variants, in your specific codebase. If you set the config right, the script will migrate the whole project in a single run. Or, you can add a group of classes, one at a time, and migrate iteratively (same as we did).

How we did it (the ”migration loop“)

To gradually migrate our Tachyons classes, we repeated the following pattern until we finished all of them:

This procedure allowed us to ”refactor“ the site in a controlled fashion: during each iteration, we changed only a small portion of the Tachyons classes and continuously tested everything locally, on the CI and on production. There were a few minor issues that slipped through but overall it worked great.

We did these migrations in a team of two, a colleague and myself, and we did them in parallel, independently. It took us several days to migrate all of the ~650 utility classes on ~30,000 places in ~800 files.

The following chart shows our progress with the migrations in time. There were big jumps when we converted a group of related scales (involving many utilities, e.g. all paddings or margins). There were also ”plateaus“ as our progress slowed down while we tackled harder issues for the first time (we’ll discuss them below) and while we rested on the weekend 🙂. Once we had finished the big scales, we continued iterating over smaller groups of classes, in a faster pace, so the ”steps“ in the image are many and small. Finally, we dealt with the last tens of classes while doing other finishing tasks. 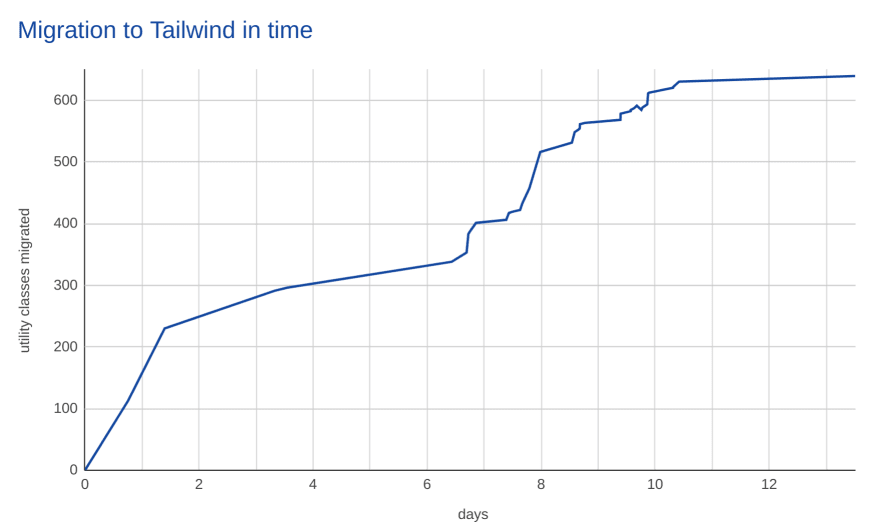 In general, we started by migrating the ”renamed classes“, then continued with the ”missing“ ones, then ”identical classes“ and finally the ”colliding“ ones. This way, we left the hardest bits for the final time, when we already had enough experience with the process and so that the rest of the team was affected for the shortest possible time.

Good. In the final part, we will mention all more or less expected issues that we came across while migrating and how we tackled them. As always, we’ll tweet.

How to Build Your Personal Brand as a Software Developer

Since 2010, NejŘemeslníci (literally ”Top Craftspeople“) is a small company based in Prague, running a web portal for connecting local craftspeople with customers that need to have something made, built or fixed. The web is built on Ruby on Rails.