In this little series of posts, we’d like to show you why and how we migrated the styles on our main website from Tachyons to Tailwind CSS and what we’ve learnt along the way. We will also share tools that will help you migrate much faster, should you set up on the same endeavor. Our website is built with Ruby on Rails, so parts of the article will be Rails-specific, but the principles mentioned here should work equally well elsewhere.

A small TL;DR teaser: we migrated around 650 distinct utility classes at ~30,000 places in ~800 files. The full migration took us a month in a team of two, while the rest of the dev team continued to work normally (it was harder than anticipated, though). We like the completeness and expressiveness of Tailwind classes and the opinionated way they are designed in. The integrated PurgeCSS of Tailwind is just superb, the dependence of bundling the CSS on the JavaScript ecosystem seems OK, though not very ”Railsy“. RubyMine tooling is catching up. We find the community around Tailwind to be active, supportive and inspiring.

The process described below will be almost as magical as this 😉:

Why we migrated to Tailwind CSS

Note: this section is not about ”Why utility CSS in general“. It’s rather ”Why Tailwind CSS in particular, compared to Tachyons“, i.e. we suppose you know why you (dis-)like utility CSS in the first place.

We started using Tachyons five years ago, in 2016, long before the current hype around utility CSS frameworks, Tailwind especially. Back then, we adopted the framework in a simple way using SASS, modified some of the scales, added our color palette, set up conventions, enjoyed the boost in front-end coding speed and used it quite happily since. (We even wrote a guest post about our early Tachyons experience but it’s in Czech only, sorry.)

Throughout the time, we began noticing things that we liked less, such as:

As you can see, there was actually no urgent technical reason to migrate, no hard push, we might as well go on with a bit of style cleaning, perhaps supported by a few new processes and team rules. But we were tired and wanted a refresh, a new inspiration. We wanted to raise our front-end devs happiness a bit by moving our code out of the legacy land, closer to what’s currently hot in the community. So, that’s why we decided to migrate to Tailwind and now, let’s see how we did it!

Before jumping on the migrations, we set some important constraints for our efforts:

The particular installation steps are somewhat outside the scope of this post. If you’ve never used webpack to bundle your CSS before, get ready for a deep dive into a whole new world…

Since our web was a Rails application, in general we needed to:

Luckily, there are quite a few nice tutorials to follow. We recommend skimming through all of them as their small differences helped us understand better what we were actually doing…

BTW, note that Tailwind 2.0 officially drops support for IE, so go the 2.0 route only if you can afford that.

To fulfill the rule #4, we spent quite some time cleaning the Tachyons styles. And yes, you bet we also cleaned the horrible width scale you saw above!

Sometimes we decided to slightly change the visual appearance of a particular piece on the web to be able to remove a spurious utility class. No need to hunt for pixel-perfection and nobody ever noticed… 😉

This tidying up took us most of the first week.

What about media queries?

During that time, we also did an analysis of our Tachyons media queries usage, with two questions in mind:

We grabbed our analytics data and confirmed that, in terms of screen sizes, our visitors come in just two large groups: ”mobile users“ and ”desktop users“. And that there is almost nobody visiting us in the "medium" / tablet range between ~430-1200 pixels: 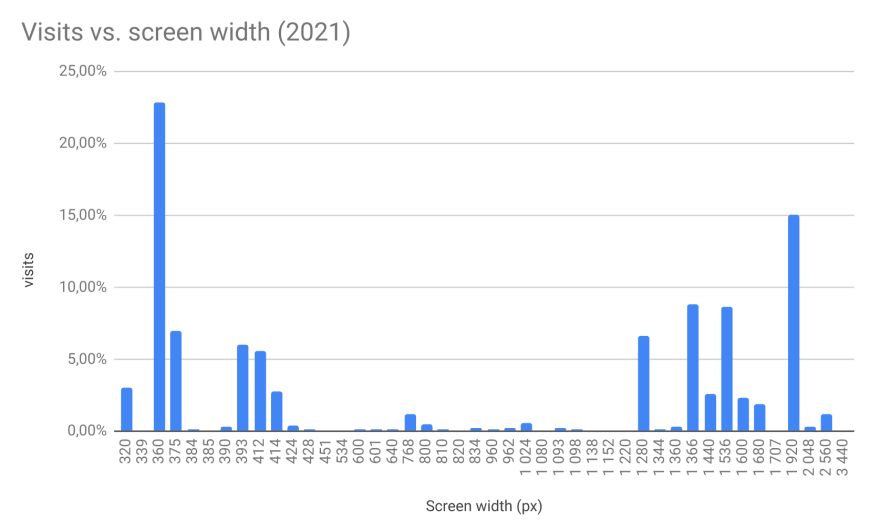 When me mapped these visit stats to our Tachyons media queries, we saw this: 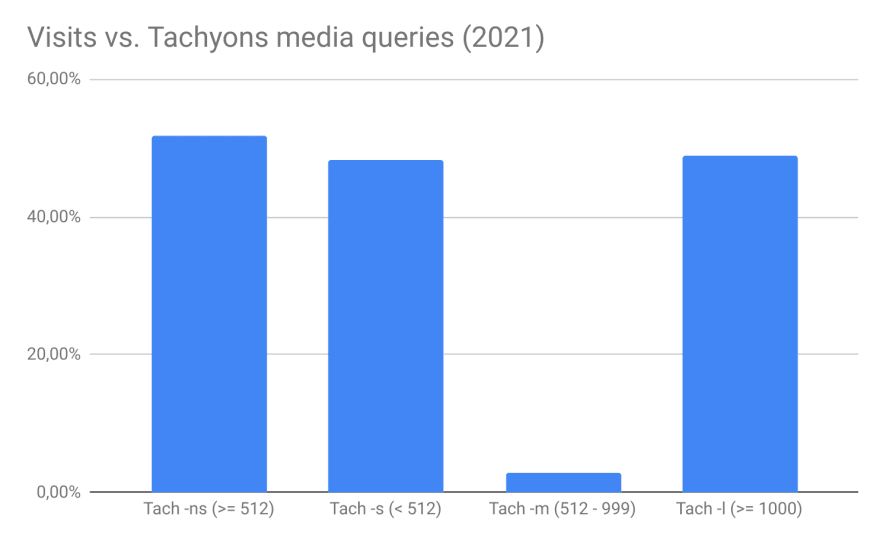 There were two important media queries, the ”non-small“ (-ns) and ”large“ (-l), that we definitely wanted to migrate. Luckily for us both were defined using a min-width rule only so the mapping to Tailwind breakpoints was straightforward (-ns ⟶ sm: and -l ⟶ lg:). The only change was that the breakpoints shifted a bit with the migration but that was no big deal. (One funny detail though: what was ”non-small“ before is now called ”small“ 🙃.)

The other two media queries turned out as clear candidates for removal:

This is getting long so we’ll wrap it here for now and in the next post we’ll actually get to the hardcore migration stuff! Stay tuned… (we’ll tweet).

How to Center Align Items in CSS with 4 Solid Methods.

Since 2010, NejŘemeslníci (literally ”Top Craftspeople“) is a small company based in Prague, running a web portal for connecting local craftspeople with customers that need to have something made, built or fixed. The web is built on Ruby on Rails.