So, I've decided to walk my path into Web Development with the Web Development Course of Angela Yu on Udemy. And this is one of the so-called "Boss Challenges" she proposed for the first JavaScript section. In this challenge, you have to do this:

Of course, I can access the solution right away. But I wanted to see if I could get to a solution by myself. So, I am writing this post on the go, as I go through the problem.

My mind isn't on the "developer" status yet. So I really need to make a route map even for the simplest apps.
So, I headed to draw.io and made a flow of what the program should do. This helps me understand better what steps I should follow. And this is what I came up with after analysing the App Brewery example: 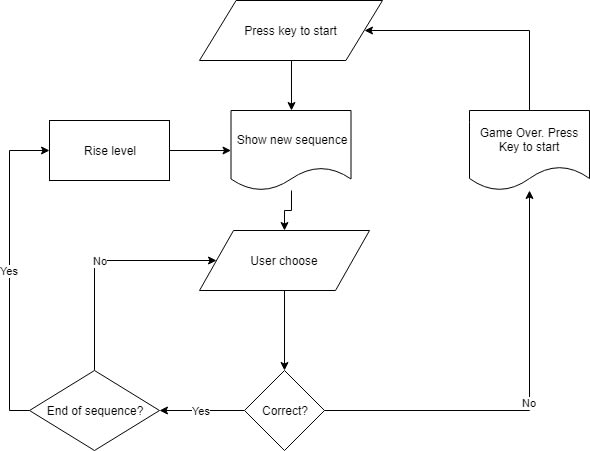 Ok, so I went through the following with no major problems:

I sort of figured out how the sequence had to be. But I couldn't make the comparison between arrays to work. I kinda knew that first I had to check the values in the same position of the arrays. And also, that after that, I should check if the length of the user array was equal to the system array. Then, launch a new sequence.

I tried lots of ways and variables. After one day stuck in the same problem, I decided to see how Angela had solved it. Feeling a bit defeated, to be honest.
Of course, she had drier and neater code than I did. But for my surprise, I was in the right way. The logic, the functions and steps achieved the same goals.

So the problem was in how I was getting the value entered by the user. Which she solved with this line of code:

So, once you entered that, everything worked.

How I felt during the process

I feel in the need to share this, for anyone who might be going through the same I am.
At the beginning, I was feeling great. I could come up with the logic quite easily, even the way I solved how to turn the numbers into colors, sounds, etc.

However, when I got stuck in the checkSequence function I felt frustrated, irritated, a bit of rage sometimes... and of course disappointed to myself.

Looking at the solutions felt like a huge defeat to me. But then I tried not to be so harsh to myself. And see I what I had actually solved on my own, even though it wasn't as smarter and dryer as It could.

Refactoring code isn't right now my priority. It will be in the future. But so far, I am focused on making things work.

At the end, when I come across these challenges and get stuck. I think that it is good to suffer the struggle. Trying to think of a solution on my own. But you really need to see solutions, right? Otherwise, how would you ever know that things can be done with different resources or just other methods?

If you want to play around, here is the final game:

And you can check the code in my Github Repo.

P/S: My record is 13. Feel free to comment down your highest score!

Use PNPM instead of NPM, Yarn

Nadine M. Thêry
At my 30s I found out that there was a developer inside a Political Science Graduated. I've been COO an CMO for 4 years but I decided to persue my dream and become a Front-end developer:)
One year coding: what I did wrong and right
#watercooler #codenewbie
Any resources on SPA SEO?
#javascript #spa
Your first coding job: a Wordpress site. How to manage that?
#codenewbie #wordpress #firstyearincode

Once suspended, nanythery will not be able to comment or publish posts until their suspension is removed.

Once unsuspended, nanythery will be able to comment and publish posts again.

Once unpublished, all posts by nanythery will become hidden and only accessible to themselves.

If nanythery is not suspended, they can still re-publish their posts from their dashboard.

Once unpublished, this post will become invisible to the public and only accessible to Nadine M. Thêry.

Thanks for keeping DEV Community 👩‍💻👨‍💻 safe. Here is what you can do to flag nanythery:

Unflagging nanythery will restore default visibility to their posts.