I graduated from Flatiron School! 🎉👩🏻‍🎓 It's been a little while since our showcase and graduation, but what an amazing journey it was 🥰 I took some time off from programming and studying to play a bit of Animal Crossing and relax. But this week my job search has officially begun and I thought, what better way of starting it off than with a series on sorting algorithms in Ruby.

As I've been learning data structures and algorithms as interview prep, I've found it quite difficult to find the resources I need to implement many of these concepts in Ruby. Because of this I thought it'd be lovely to start a sorting series in Ruby for anyone else who wants to use this dynamic, amazing language for their coding interviews. I've read a lot of articles on techniques that should be studied for the coding interview, and I've yet to find one that doesn't recommend knowing at least a few sorting algorithms. So I hope you find this series helpful and please leave comments below if you have anything to add. Thanks and enjoy!

So the first of the series I'd like to begin with is quick sort.

First, a little overview about the quick sort algorithm:

Like every good algorithm that would ever be needed in any good coding interview, we have to discuss the time complexity.

Although worst case is very slow, quick sort is actually usually the most practical choice for an implementation of a sorting algorithm when solving problems. And a fun fact is that most of the sort functions in different languages actually use some form of quick sort!

Alright, let's go into the theory behind the quick sort algorithm. When I say theory I find it the most helpful to visualize what the actual process is and then we can code it up.

The basic idea of quick sort is that the array is broken up into two halves, or partitioned, with a chosen number, the pivot, as the middle value in between both of the halves. This is done recursively, or over and over again on the smaller halves that are created until the array is sorted. 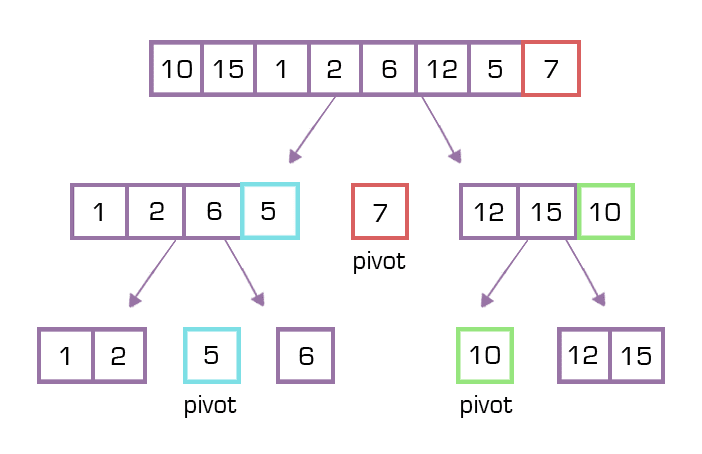 A moves down the array until it finds a value smaller than the pivot and B does not move until A encounters a smaller value. When A finds this value, it swaps it's value with B's value, and then B is incremented. This pattern continues until A reaches the end, and then the last value in the array, or the pivot, is swapped with the value at B. This is to ensure that the pivot value always ends up where it belongs. 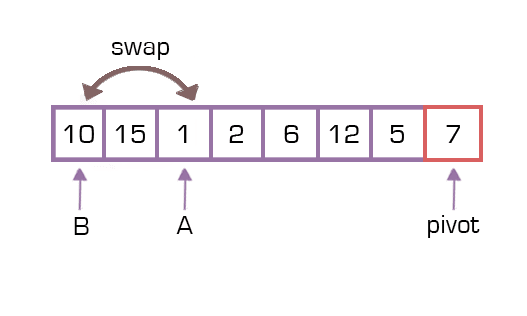 Alright, on to the part you've been probably waiting for, the code! This is just my implementation of quick sort in Ruby and you can feel free to play with it and change it around to whatever works best for you.

For a little clarification in the code and to match the theory that was previously explained, pointer A would be represented by i and pointer B would be represented by pIndex (or partition index). First we have our method quick sort, which calls on the function partition once and then on itself twice. The partition function is used to break the array into the halves and then quick sort is called again on the new halves until there are no halves left. This will then return our sorted array.

Here are a few helpful resources in case you want to see the quick sort algorithm in action or if you need a little refresher on recursion: