The results for this year's JS13k game jam are out. I was blessed with 20th place with my game Regresso. But this post isn't about my game. Today I want to talk about the competition itself, namely about the voting system. If you haven't checked this year's list, do it now!

JS13K is a competition that gathers developers from different backgrounds and skill levels. Sure, senior game developers always have an edge in this competition, but the limit of 13 kilobytes per game really forces you to be creative and helps level out the battlefield a little bit.

In the past year, the competition counted on an army of judges that played some of the games and then casted their votes. I trust the organizers to have picked great experts but in the past 2 years I always felt like that just wasn't enough. From the reviews I got in the last two years, it seemed to come down to luck whether the few judges of your game enjoyed it or not. But game reviewing is far from being an objective science.

This year, though, they tried something different. All participants were invited to vote for all other games. The way they did this was with a series of 1vs1 battles. The more people voted, the more accurate the results. As long as enough people vote, of course. 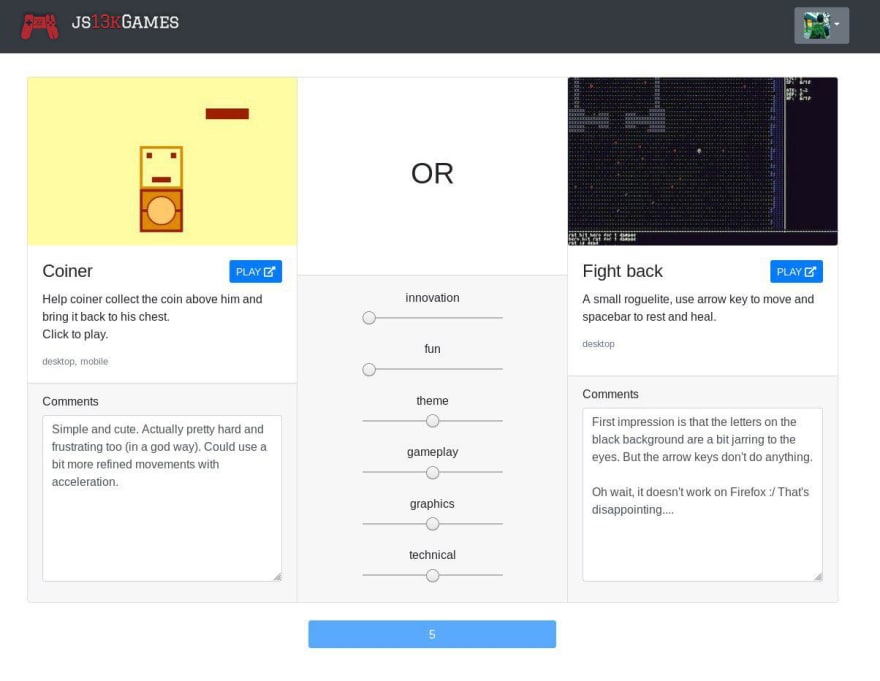 I found this to be a great idea. When you look at a list of 240 games, it may look daunting to vote for all of them. The name of this problem is Analysis Paralysis. But if you are presented with only 2 games, picking the best one is basically trivial.

From what I could gather from my twitter feed, people almost had as much fun playing the "voting game" as they did playing the games themselves. The introduction of a vote-o-meter also helped reinforce the gamification of voting.

Digging through the vote API

You can't give developers an API and expect them not to poke around. I didn't want to poke too much - just enough to mine all data into an easily digestible JSON. There are things missing the the frontend of the voting website which I very curious to know.

First, I wanted a list of all my 128 comments. I have published them here.

Second, I believe there is room for some sort of "Honor Board". Since all voters were able to vote for 6 different categories - innovation, fun, theme, gameplay, graphics, and technical - I was very curious to know if it would be possible to make a top 5 for each category!

So without further ado, here's the Honor Board for JS13K 2019. Note: as a tie breaker, I used the sum of the points from all categories.

Runner ups: "Wolf and Sheep", "Watch your Back"

Last, but not least, I wanted to sincerely thank all developers who took the time to comment on the games they voted. It's really helpful. I hope I wasn't too harsh on my own comments and I really hope that anyone who found my comments were unfair feels comfortable to discuss it with me over twitter.

Here's the top 20 most engaging voters:

I think there is still room to improve on this voting system, as I am sure the organizers are aware. Nerds always love to have more stats and the voting app could help provide them quite easily.

One front where the system could be improved is to provide a bit more in terms of instructions. I'm not sure if the voting categories were purposely vague, but e.g. "theme" could mean that the theme of the game was interesting, or that the game adequately follows the theme of the competition.

I also think there could be more categories. There was no way to vote for games with good background music or sound effects (other than the generic "technical"). Also, if web monetization is enabled in the games, it should be possible to vote for the game that best implemented that feature.

Data dump from the voting API

Script for getting the top lists