NOTE: This series goes a bit unconventional, by not using any libraries or abstractions for Redux, following plain Flux architecture conventions. The recommended way of writing Redux is by using RTK (Redux Toolkit).

In the previous part we laid out the requirements, planned the architecture and initialized firebase. Now, we are going to setup Redux, connect it to Firebase and create our first component.

As stated in the previous part, we are going to use Redux Core and not Redux Toolkit, which includes Redux Core, plus a few other packages and abstractions to make development easier. From the official page:

The Redux Toolkit package is intended to be the standard way to write Redux logic. It was originally created to help address three common concerns about Redux:

The reason we are not going to use Redux Toolkit, or any other similar package is simply because getting to know the intricacies of the tools you use to build important parts of your application - and state management is one of them - is of paramount importance. I'm not talking about learning the internals of webpack here, but knowing how to setup and develop a vanilla Redux project before using various abstractions and templates, IMHO, is a must. Furthermore, you won't be able to understand the core Redux concepts (or Flux architecture, in general) without getting your hands dirty at a "lower level".

In this series I won't be explaining how Redux works, only providing brief insights and links to any resource I deem useful. If you want to take a deep dive into Redux you will find everything you need in the official page.

The first thing we are going to do is create the root reducer. The root reducer is going to combine all of our reducers inside src/store/reducers. This gives us the ability to namespace our state, by creating different slices of it and separate business logic. As stated in the official FAQ section:

The suggested structure for a Redux store is to split the state object into multiple “slices” or “domains” by key, and provide a separate reducer function to manage each individual data slice. This is similar to how the standard Flux pattern has multiple independent stores, and Redux provides the combineReducers utility function to make this pattern easier.

You can read more about splitting up reducers logic and combineReducers here and here.

Create a file named index.js inside src/store/reducers and type the following code:

Also, create a file named feature.js in the same folder to avoid getting an import error. This is going to be our FeatureTitle component reducer, but just leave it empty for now and ignore the console complaining about not having a valid reducer.

The root file of our app, index.js, is going to contain all of the "binding" logic (Provider components) both for Redux and Firebase. It should now look like this:

In the above snippet, we basically pass the root reducer to the createStore method in order to create our store. After that, we pass it as a prop to the Provider component, which is going to wrap the App component and make our React app aware of the store.

Now we should be able to use redux inside our app. Inside src/containers/App.js import some Redux hooks to make sure that everything is running smoothly. It should look like this:

At this point, running npm start to start the development server - if you haven't already -should not produce any error. Next, we are going to install redux-devtools in order to be able to access and debug our state client-side.

You can basically follow the official instructions, but we'll cover it here, since it's fairly quick. Run:

Then add this argument to the createStore method inside src/index.js:

Finally install the chrome extension from the chrome web store. If you are not using chrome or encounter any other issue, please visit the official extension page.

Close and re-open chrome devtools and refresh the page. You should be able to see a tab named Redux. This is where redux devtools live.

Now that we've set up Redux we are ready to create our first component! We will begin by designing a generic Input component, then move on to crafting its state and finally add Firebase persistence. By taking a look at our component diagram from the previous part, we can clearly see that FeatureTitle and UserName are simple input components with their functionality doubling as data input and data display. A generic Input component is going to be used to facilitate the creation of FeatureTitle and UserName components.

Inside src/component create a folder named Input and add a file named index.js. Then paste the following code:

We created a generic, fairly flexible Input component with dynamic styling, placeholder, etc., to use throughout our app as we see fit.

NOTE: Using propTypes is not necessary, but is highly recommended, especially when not using any other form of type-checking, such as Typescript. Type-checking can help catch bugs, as well as document our code. In this project, we are going to use them, so if you are not going to omit them run npm i prop-types to install the relevant package.

Go ahead and create a folder named FeatureTitlein src/components. Add a file named index.js and paste the component code:

I hope that the code is mostly self-explaining. We basically grab the current title from the central store using useSelector hook (like useState, but for Redux) and assign value and disabled props based on its value. We also create a dispatcher to handle the onChange event, by dispatching the SET_TITLE action along with its payload (the new value).

It is often claimed that constants are unnecessary, and for small projects, this might be correct. For larger projects, there are some benefits to defining action types as constants:

Inside src/store/constants create a file named feature.js and type the following code:

Here we are simply exporting a constant named SET_TITLE which is going to be used as an action name to change our component's title.

Inside src/store/actions create a folder named feature. Any action associated with the FeatureTitle component will be placed in there. Add a file named setTitle.js and paste the following code:

This action is solely responsible for setting the FeatureTitle value in our Redux store.

Inside the feature.js file we created earlier in src/store/reducers, paste the following code:

As you can see, the reducer is just a function which receives the current state and the action to be performed as arguments and calculates the new state derived from that action.

The final step for a working component is adding persistence to our database. To accomplish this, we first need to wrap our app with the Firebase Provider component.

Head over to src/index.js and add the following imports:

Also, modify the redux imports to include applyMiddleware and compose methods:

We also need to change the way we initialize devtools:

and refactor the store to include the new middleware:

Then, wrap the App component with ReactReduxFirebaseProvider like this:

The end result should be this:

In case you face any issues, the official documentation for react-redux-firebase is here.

You can read more about extending Redux functionality here.

The compose method is a utility function often seen in functional programming. As stated here:

You might want to use it to apply several store enhancers in a row.

The official description of the applyMiddleware method:

Middleware is the suggested way to extend Redux with custom functionality. Middleware lets you wrap the store's dispatch method for fun and profit. The key feature of middleware is that it is composable. Multiple middleware can be combined together, where each middleware requires no knowledge of what comes before or after it in the chain.

It applies the given middleware and returns a store enhancer.

Redux Thunk is a middleware which allows us to create actions that return a function instead of an action object. This function, when called, returns the action object instead which in turn gets passed as an argument to the dispatcher.

Now that we integrated Firebase with Redux and connected everything to our App component, we can manipulate data saved in Firebase from anywhere, through our Redux store!

First create a file named debounce.js inside src/utils and paste the following code:

This is going to be used on inputs and buttons, to prevent aspiring spammers from flooding our database with requests 😏.

Inside src/firebase create a folder named feature. This folder is going to contain all Feature related firebase functionality/services. Add a file named updateTitle.js and paste the following code:

This function is going to be used to update the FeatureTitle value in the firebase database. You can check the official Firebase Javascript SDK docs here.

Add another action named setupFirebaseListeners.js in src/store/actions/feature and paste the following code:

This action, once dispatched, will register an event handler for every change in FeatureTitle value update. This event handler will essentially dispatch the SET_TITLE action, in order to update the application state. It will be executed on initial application load, as well as every time the title value changes (by another client, because changes made from us are immediately reflected in the UI for performance reasons, as stated below).

This sums up the two-way binding between our Redux state and Firebase, providing the app with real-time updates.

Head over to src/store/actions/feature/setTitle.js action file and modify it to push updates to Firebase:

NOTE: The key thing to notice here is that we are calling the Firebase middleware function independently of Redux state update (dispatch). This effectively decouples the UI state from the Firebase state. This is important, because if we updated the state after the Firebase promise resolution (either success or failure) then the UI would be unresponsive and laggy. This way, we immediately update the application state, assuming changes were successful and revert to the old one, in case something goes wrong. That's why we pass oldState to firebaseUpdateTitle.

Go to localhost:3000 and you should be able see our component in the center of the page. Open a second tab/browser and try changing the input value. Changes should be synchronized between tabs/windows after the specified debounce timeout (500 ms in this case). 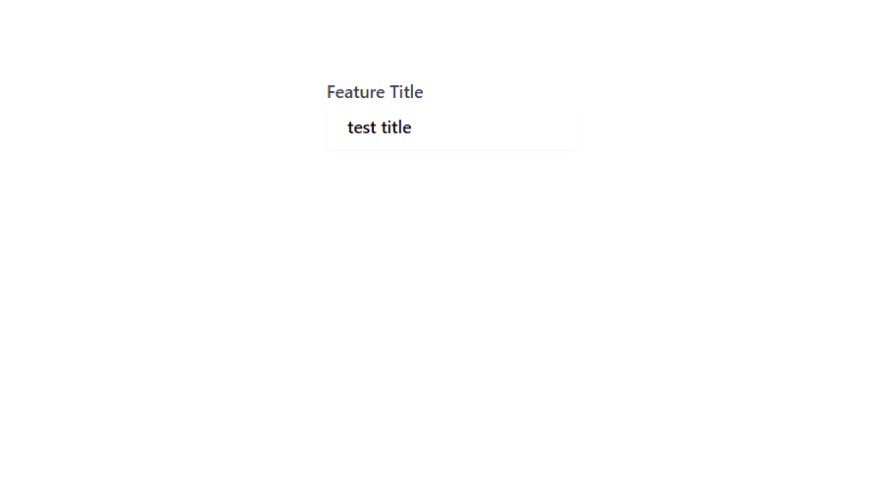 That's it for this part, hope it wasn't tedious. Let me know if you found it interesting.

Any other feedback is also appreciated! Stay tuned for part 3 😎