NOTE: This series goes a bit unconventional, by not using any libraries or abstractions for Redux, following plain Flux architecture conventions. The recommended way of writing Redux is by using RTK (Redux Toolkit).

Hi y' all, this is part 1 of a multi-part series, in which we are going to build a real-time scrum voting app using some of the hottest frontend technologies! 😎

The goal is to implement a web application that will be used by a remote scrum team, during their sprint planning session, to privately vote on the complexity score of a single story (task/feature to be implemented).

You can check it live here.

The code is also here.

Phew, that seemed quite overwhelming 🤯. This project was part of a code challenge, so don't put the blame on me 😂 Anyway, let's get down to it.

One of the first things that I do when I start working on a front-end application is meticulously plan its architecture.

I visually divide the app into logical, self-isolated components with discrete functionality.

Then I search for reusable components which will either be placed in a commonmodule folder (in bigger projects) or will just be created with reusability in mind (dynamic, prop-based styling, etc.).

Next, I try to delegate possible state to each one of them (identifying stateful and stateless components), in case we are not using a centralized store for state management. In this case we will be using Redux, so only purely local state will be in-component.

Finally, I plan the app's folder structure as well as possible. Should the need to make changes down the road arise, especially if the app grows, a solid foundation is going to make for a resilient app. 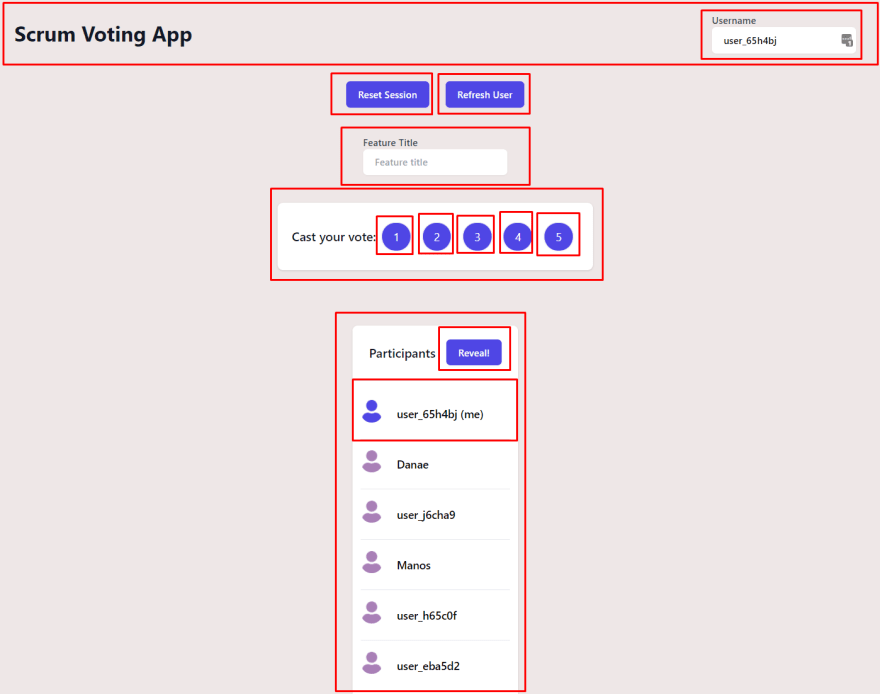 By taking a look at the image above, one could easily distinguish between the following components:

All of our state is going to live in the Redux store, so no planning is going to take place in here 😊

Our app's code will live in src folder and is going to have the following structure:

I hope it's mostly self-explaining. We are going to add some more folders in a later part, but for now, a bird's-eye view should do it.

To initialize our app, run:

You can pretty much follow the official instructions here, there's no point in repeating them in this post.

We're going to use plain redux without any helpers (i.e. redux-toolkit). We are also going to use redux-thunk middleware to handle our async actions.

Here we need two libraries, firebase and react-redux-firebase. The first one is the Firebase SDK needed to connect to our database instance. The second one provides us with Redux bindings for Firebase in order to make our lives easier.

Create a folder called containers and move App.js and App.css in there and change the relative import in index.js accordingly:

Also change the logo import in App.js to avoid any errors:

Create the rest of the folders inside src, as seen in the Folder Structure section above. You can also delete App.test.js file or move it inside __tests__ folder.

The next step, after we've finished drafting our application's blueprint, is to set up Firebase.

Firebase is a cloud JSON database which lets us store data in key-value pairs. Its Realtime Database flavor gives us the ability to synchronize every client using emitted events. All we have to do is utilize the API and create our handlers. Pretty cool, right? 🥳

Go to https://console.firebase.google.com/ and login with your google account. Create a new project by clicking on "Add project". Type a name and optionally enable Analytics.

Click on "Realtime Database" in the menu bar and then "Create Database". Choose a location and then "Start in test mode" to have our app publicly accessible to everyone. You can change this later if you want to add authentication and whatnot. Boom, you're up and running!

Go to your project settings in Firebase console (Project Overview > Project Settings) and scroll down to "Your apps" section. Select our app and under "Firebase SDK snippet" choose "Config". This is our config object, copy it.

Create a file called firebase.js inside config folder and paste the config object and some additional code, likewise:

Now we're ready to use our database.

That's it for this part, I hope you found it interesting.

Let me know if you catch any errors and stay tuned for part 2!

Q. What is JavaScript/Socket.io, node.js for Perl?

Once suspended, mliakos will not be able to comment or publish posts until their suspension is removed.

Once unsuspended, mliakos will be able to comment and publish posts again.

Once unpublished, all posts by mliakos will become hidden and only accessible to themselves.

If mliakos is not suspended, they can still re-publish their posts from their dashboard.

Once unpublished, this post will become invisible to the public and only accessible to Emmanouil Liakos.

Thanks for keeping DEV Community 👩‍💻👨‍💻 safe. Here is what you can do to flag mliakos:

Unflagging mliakos will restore default visibility to their posts.