This part will be a collection of advanced topics that we need to make use of Kubernetes and it is the last part of this tutorial which I hope simplified the technology and gave you a good start, so let's start

For the sake of simplicity, we will use the SQLite version (master branch) of the application, but the MySQL branch will work as well.

They are similar in terms of configuration, but different when each gets invoked, that is why most guides state them together.

Note: We said 'containers' and not 'pods' are the checks are per container.

Types of the Checks

The checks can be one of the following

As stated in the documentation, there are several configurations for the probes

Note: In our case (web-app), both readiness and liveness checks shall be 'httpGET', but the sake of the tutorial, we will configure the rediness check as a command and liveness to be httpGET

in the web-app container section, add the following YAML which is available in django-example_checks.yaml

Note: For the sake of the demo, we set the failureThreshold very high that should NOT be the case on a real environment.

Wait for few seconds and then run

You will see that the po is not ready, so to know why it is ready run describe as shown

and check at the end. You will see that the pod is unheathly as rediness probe is failing as shown

To solve the issue, connect to the pod to touch the final, this is describe in the next section 'Executing Commands in Pods'

Notes
1. 'django-example-5c79c94df6-9vkr7' is the pod name
2. -c takes a container name, useful if there are multiple containers in the pod
3. What is after '--' is the command to pass to container, so here we started a bash session
4. '-it' is a flag to state that this is an interactive session.

Then once you get the terminal to the container, enter the following command

Then press CTRL+D to exit, and after check the status of the pod and you will find it ready as shown below.

Writing a complete bug-free application doesn't exist so we need to make an update to our web application now.

Rather greeting the user by the username, we will greet him by the first name.

Note: You can move to update branch if you dont want to make the change manually.

To do the update open 'django_app/accounts/templates/home.html' and Go to line 18 and change it to

Next, you need to build a new docker image, to save time, build it against 'minikube docker'

Then edit the deployment on Kubernetes by running

In the file, search for the image and change it to the new image and also, remove the readiness check as shown below 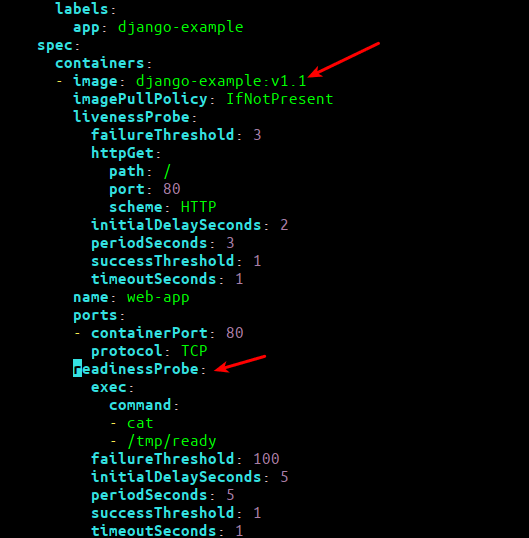 See the old pod are terminating and a new one is starting.

Oops!, we made an issue, we didn't handle the case when there is no first name, like with the account created by 'create superuser', so first let's rollback the production to the old image, till we fix the issue.

First, let's get the history

This will show the change history as shown below

Note: I have multiple changes as I didn't remove the readiness check in the 2nd change.

Why is it ready, because of the ready state, so let's touch the file as we did above.

So in the last part of this tutorial, we showed readiness and liveness probes, executing commands in the container and finally how to roll and rollback an update.

There are some interesting topics we didn't cover, like
ConfigMaps and secrets, which allow to store information in Kubernetes (like the mysql password) instead on saving them on file, also Ingress and Ingress Controllers which may be configured to give Services externally-reachable URLs, load balance traffic, terminate SSL / TLS, and offer name-based virtual hosting.

Finally, I hope this tutorial was useful and you learnt something.

TIL: Docker Logging with Loki and Grafana on Synology

What Are Multi-Stage Docker Builds

Once suspended, mkalioby will not be able to comment or publish posts until their suspension is removed.

Once unsuspended, mkalioby will be able to comment and publish posts again.

Once unpublished, all posts by mkalioby will become hidden and only accessible to themselves.

If mkalioby is not suspended, they can still re-publish their posts from their dashboard.

Once unpublished, this post will become invisible to the public and only accessible to Mohamed M El-Kalioby.

Thanks for keeping DEV Community 👩‍💻👨‍💻 safe. Here is what you can do to flag mkalioby:

Unflagging mkalioby will restore default visibility to their posts.