Maybe you have heard about Django and that it can help you build websites. You might be new to Python, new to web development, or new to programming as a whole.

This new series, Understand Django, will show you what Django is all about. Throughout this series, I hope to reveal how Django is a powerful tool that can unlock the potential of anyone interested in making applications on the internet.

We're going to take a high level approach to learning. Rather than starting at the bottom with all the pieces of Django, I'll give you the big picture, then explore each layer more and more to reveal how much Django does for developers under the hood.

Let's get started from the very top of a user's internet experience: at the web browser.

Django is a web framework, but what the heck does that even mean? How do websites work? I'm not going to be able to walk through all the details, but this post will lay down the breadcrumbs. We'll look at the way your web browser requests data from the internet and the "plumbing" needed to make that work. Equipped with these key words and acronyms, you should be able to start your own research on these topics.

The internet works by fulfilling a user's desire for information. That "information" takes many different forms. It might be:

Whatever people are looking for, the information is transferred via the same mechanisms. In internet-speak, all types of information and data fall under the name resource.

The way we get resources are with Uniform Resource Locators or URLs, for short. You know what URLs are, even if you didn't know them by name.

These are all examples of URLs. Often we call them web addresses because that feels right. A URL is the address of some resource on the internet. When you hit Enter on the address bar of your browser, you're saying "please browser, go get me this." In other words, we make a request from the browser. This request starts a large chain of events so that the resource at that URL can get to your eyeballs.

What's in this chain? Loads of things are there. We'll gloss over many of the layers in this discussion because I'm guessing you aren't planning to get down to the level of how electrical signals work in networking cables. Instead, let's focus on these two parts of the chain for now: DNS and HTTP.

A URL represents a resource that you want from the internet. How does the internet know where it comes from? That's where DNS comes in. DNS stands for Domain Name System. The important word there is "Name." Let's return to the address analogy.

In a postal address (at least from a US perspective), there is the street, city, and state. We might write it like:

123 Main St. is in the city of Springfield in the state of Illinois (IL).

Likewise, a URL fits into a similar format.

The terminology is different, but the concept of going from narrow to broad is the same. Each piece between periods is a type of domain. Let's look at them in reverse order.

Domain names are not how computers communicate. The domain name is something "friendly" for a human. Computer systems are designed to work with numbers so those domain names must be translated into something manageable. To do this, the internet uses a system of DNS servers (special purpose computers) to act as the translation layer between domain names and the numbers that computer networks use.

Those examples are special because they are in specially designated subnetworks, but we'll set that tangent aside. You can delve deeper on that topic on your own if you would like.

Back to DNS, the system takes domain names and keeps a distributed routing table of names to IP addresses across the collection of DNS servers. Wait, what?

DNS servers stack up into a gigantic hierarchy. When your browser makes a request, it asks the closest DNS server for the IP address of the domain name you requested. The DNS server keeps a lookup table of domain names to IP addresses for a period of time. If the domain name isn't in the table, it can ask another DNS server in a chain that will continue to look for the domain's IP address. This leads to a couple of outcomes:

This is simplified to exclude some of the warty corners of DNS, but I hope you get the idea.

What Are We Sending?

I know we're still not talking to Django yet, but I promise we're getting there. There are a lot of layers to go through when taking the top down approach, but I think it helps build the foundation that removes the mystery of what makes the internet (and Django) work.

The other piece we need to explore is HTTP, or the Hypertext Transfer Protocol. This part of internet communication describes how content transfers between browsers and servers, or, more generically, between any computers that use the protocol.

The protocol uses a standard format and a set of commands to communicate. A few of the common commands are:

There are other parts that I've omitted, but this gets us started. The top line provides the command, the path to a particular resource on the site (i.e., /about/), and a version of the protocol to use.

After the first line are a list of headers. Average browser users never see headers, but headers are extra data that tell the server more about the request. For HTTP 1.1, the Host header is required because it dictates where to make the request, but any other header is optional.

In the example, I also showed the Accept header. This header tells the server what kind of content the browser can receive as a response. There are other headers that can tell a server what else it should "know." These headers can:

Most of the headers are handled automatically by browsers and servers, but we will see instances where we want to use these headers ourselves so it's good to know they exist.

It's time to discuss Django! We now have a rough idea of what browsers do. A browser sends an HTTP request to a URL which is resolved by the DNS system. That request arrives at a server that is connected to the IP address of the domain name. Django lives on such a server and is responsible for answering requests with an HTTP response.

The response is what the browser user wanted. Responses can be images, web pages, videos, or whatever formats a browser can handle.

Before Django can handle a request, there is more layer to traverse: the Python web server.

A web server is the software on a machine designed to handle the incoming HTTP requests. Sometimes this terminology can be confusing because people may also apply the name "web server" to an entire machine that is serving web traffic. In this instance, I'm referring to the actual program listening and responding to web requests.

A Python web framework like Django runs with a web server. The web server's role is to translate the raw HTTP request into a format that the framework understands. In the Python world, there is a specific format so that any web server can talk to any Python web framework. That format is the Web Server Gateway Interface, or WSGI (which is often pronounced "wiz-gee").

WSGI enables common web servers like Gunicorn, uWSGI, or mod_wsgi to communicate with common Python web frameworks like Django, Flask, or Pyramid. If you really want to nerd out, you can explore all the details of that format in PEP 3333.

Once the web server sends request data, Django needs to return a response. Your role as a Django developer is to define the resources that will be available from the server. That means you must:

There is a ton to unpack in those two statements so we will explore individual topics in future articles. By now, I hope you have an idea of how a request gets from your browser to a machine running Django. 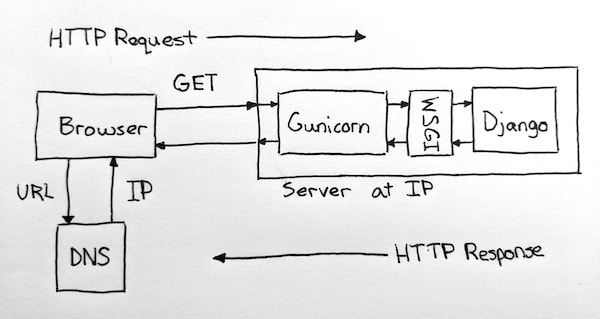 This article is relatively free of code examples, and for good reason. There are already enough concepts to wrestle with and I didn't want to add code complexity on top of it. Writing that code will be the focus of this article series so we can answer questions like:

Django has answers for all these things and way more. The Django philosophy is to include all the required pieces to make a full web application for the internet. This "batteries-included" philosophy is what makes Django so powerful. The same philosophy can also make Django seem overwhelming. My goal in this series is to introduce piece after piece to build your understanding of Django so you can get productive and get going on your own web application.

In the next article, our focus is going to be on those URLs that our application will respond to. We will see:

If you'd like to follow along with the series, please feel free to sign up for my newsletter where I announce all of my new content. If you have other questions, you can reach me online on Twitter where I am @mblayman.

Finally, there is one more bonus topic...

In the series, I'm going to have plenty of code examples, but I'm not going to show how to get Django running from scratch each time. Instead, I'll put in some starting instructions in this article so you can follow along in the future.

We're going to use a terminal to run commands. Windows, macOS, and Linux are all a bit different. I'm showing macOS here because that's what I run. The dollar sign ($) is the traditional starting character for a bash terminal so when I list commands, don't type that character. I'll try to give pointers and highlight differences when I can.

We need a place to put our work. Since this series is call "Understand Django," I'm going to use that name. Call yours whatever is meaningful to you.

Next, we install Django into a virtual environment so we keep our project code separate from the rest of the installed Python packages.

Django includes some tools to get a project started quickly which we can use. We'll run a single command to get it going.

This commands says "start a project named 'project' in the current directory (.)." After that command is finished, you should have some files and a layout that looks like:

To check if the basics are working, try:

If you copy and paste that URL into your browser, you should see a welcoming start page!

The other thing that we need is an "app." This is (perhaps confusingly) the name of a Django component in a project. What you need to remember is that a Django project contains one or more apps.

Let's create an app to work with:

Finally, we must hook that app into Django's project settings. Open up project/settings.py, find INSTALLED_APPS and append to the list so it looks like:

That's as far as we need to go to get started with our code examples in the next article. We have a Django project that can run locally for testing that is configured with its first app. See you soon to talk about making URLs and resources!

This article first appeared on mattlayman.com

The Peregrine programming language - A Python-like language that's as fast as C.