Research on how AI can integrate itself into mental health treatment is in its early stages of development. While AI is not ready to be deployed as a sole treatment, NLP has shown promising results in tandem with other methods of treatment.

AI’s use in healthcare

While being on a steady rise for years, the COVID-19 pandemic has increased reported cases of poor mental health significantly. KFF reports that the implications of the pandemic have resulted in 4 in 10 adults reporting symptoms of anxiety and/or depressive disorders. The increase in cases has a risk to further stress the US’s overburdened mental health system. Advancements of AI in health care could show promising results for the treatment of mental health. 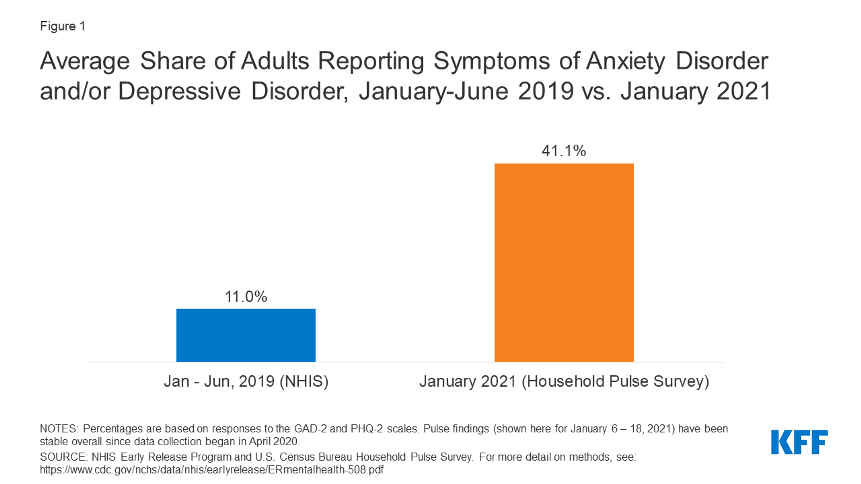 AI’s use in healthcare

AI’s deployment into healthcare is a relatively new integration but is growing in use cases rapidly. Image processing for biopsies, robot-assisted surgeries, and even aiding in clinical diagnosis are all currently being used. According to Brookings, AI has the power to push the boundaries of human performance, democratize medical knowledge and excellence, automate drudgery in medical practice, and manage patients and medical resources. AI has shown promising results in tackling many medical procedures but has only recently begun to be used for mental health cases.

At its current state, mental health is primarily addressed by physicians in two ways: drug treatments and/or talk therapy. Due to the increase of people seeking talk therapy, psychologists are becoming overbooked for months into the future. Todd Essig, a clinical psychologist and psychoanalyst, spoke with CNN saying “the pandemic is exposing fault lines that should have been corrected years and years ago.” Disparities within healthcare access and insurance coverage have pushed many suffering from poor mental health not to seek treatment, as it’s too far out of reach.

To address increasing equitable access to mental health care, AI technologies focused on replicating traditional therapy are starting to be developed and used as a supplement to other mental health treatments. Natural language processing (NLP) is being used in trials to replicate the effects of traditional talk therapy. In a conversation with the New York Times, Jesse Wright, a psychiatrist and director of University of Louisville Depression Center, said “you can deliver it pretty readily in a digital framework, help people grasp these concepts and practice the exercises that help them think in a more rational manner.” Wright expanded and cited studies which showcased algorithms that performed well in their ability to guide patients through standard behavioral therapy processes.

To develop NLP for therapy, researchers took recordings from thousands of sessions amongst different therapists and clients and processed them using speech recognition software. Machine learning algorithms were used to recognize the associations made between client testimonials and therapeutic response. In a study on NLP for psychotherapy, published in the Journal of Counseling Psychology, researchers found that their “results highlight the potential to harness natural language processing and machine learning to predict a key psychotherapy process variable that is relatively distal from linguistic content.” Using this technology, researchers have the potential to program NLP technology to react appropriately when given input values around mental health. 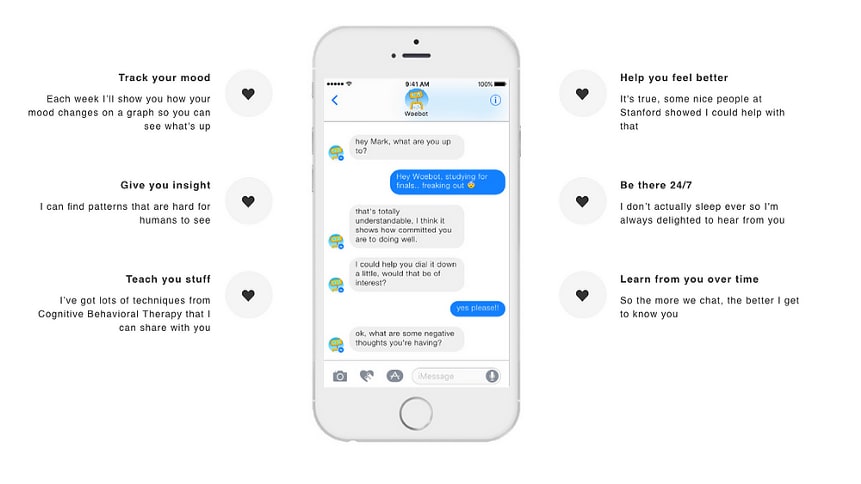 The success of these types of trials has led to the development of FDA approved chatbots for psychotherapy. Woebot is a mobile app which uses NLP to replicate traditional cognitive health therapy. Providing widespread access to “digital therapeutics” is a selling point of Woebot, and it shows promise with its recent FDA Breakthrough Device Designation for postpartum depression.

Woebot and other mobile apps are not a clear-cut solution to mental health treatment. Experts have voiced concerns over the app’s algorithms and its inability to recognize and solve complex human issues. Moreover, people have been shown not to use mobile apps consistently, which limit their effectiveness.

Despite its pitfalls, many users have reported a good experience with the app. While one user was frustrated with some of the generic answers the algorithm fed him, the user claims that expressing their feelings on the app made them realize the need for further treatment. Woebot considers itself a digital therapeutics tool and doesn’t claim it can directly address anxiety and depression.

AI has been slow to integrate itself into mental healthcare systems. While quantitative data drives much of the research in the medical field, mental health care relies heavily on qualitative results from the patient’s way of describing their issues and the psychologist’s way of interpreting them. An algorithm won’t always be able to grasp the complexity of the issues people deal with. An AI’s inability to understand and respond to what users are telling them can leave users feeling more frustrated and misunderstood.

In addition to how effective these systems may or may not be, offloading treatment for mental health to algorithms could risk increasing disparities in equal treatment. According to Brookings, “as digital solutions are cheap, scalable, and cost-efficient, segments of the population may have to rely on a substandard tier of service to address their mental health issues. Such trends also risk placing responsibility for mental-health care on users rather than healthcare providers.”

Full-stack monitoring in one solution or is it better to split out the functions between several applications?

How to save the entire user session using Python?

Mage
The fastest way to build and use AI. Mage is a tool that transforms your data into predictions. Build, train, and deploy predictive models in minutes. No AI experience required.
How to use Spark and Pandas to prepare big data
#ai #machinelearning #spark #python
A Visualizer for PyTorch Image Transformations
#machinelearning #datascience #ai #computervision
Building your first machine learning model
#ai #machinelearning #development #developertools